The Kia Optima HEV, a hybrid electric vehicle, completely revised inside and out for 2017, seen here in optional Gravity Blue, posing confidently in a sophisticated setting, even in base LX trim.

There may be nothing like throwing your car into a racetrack hairpin.

There’s all sound and fury, the smell of hot brakes, the protesting tires, the g-forces straining you against your seat belts as you sling through an apex, the growing roar of the engine as you squeeze the power back on, more, more, more until you finally squirt out of the corner and onto the next straightaway.

But, nerdy as it sounds, I get almost as big a kick out of glancing at the gauge clusters in a hybrid, carefully milking the most available EV propulsion out of the combined gas/electric powertrain.

It’s all about striving for “leaves” or “flowers” or whatever gimmicky graphic the eco gauge is showing, and maxing out the best fuel economy numbers possible.

It just never gets tired.

Tested here is an optimized Optima, the 2017 Kia Optima Hybrid Electric Vehicle (HEV), loaded with the latest in fuel efficient hybrid technologies and posing quite confidently in the kind of sophisticated setting that I would normally use as a backdrop for a premium luxury sedan.

Kia’s fourth-generation Optima lineup already offers a broad range of gasoline-powered models to choose from, ranging in price from around $23K – $38K, and with three four-cylinder engine choices – a 185 hp 2.4-litre motor for starting LX, LX+ and EX models, a 245 hp 2.0-litre turbo unit for gearheads going for SX and SXL top-end performance models, and a 178 hp 1.6-litre version leaning towards fuel-efficiency in the lightweight LX ECO Turbo trim level.

The Optima HEV was heavily revised for 2017, aiming for a 10 per cent increase in fuel efficiency, starting with a stronger, quieter framework carrying new outer styling cues geared towards improved aerodynamics, including a new front air curtain, a new active grille shutter, new side sills, a beveled rear bumper, a rear diffuser designed to stream airflow more efficiently around the rear and the shrouded exhaust tip, and also adding new aerodynamic wheels and new tires.

All these factors combine for a 0.24 Cd of drag, one of the lowest in the segment. 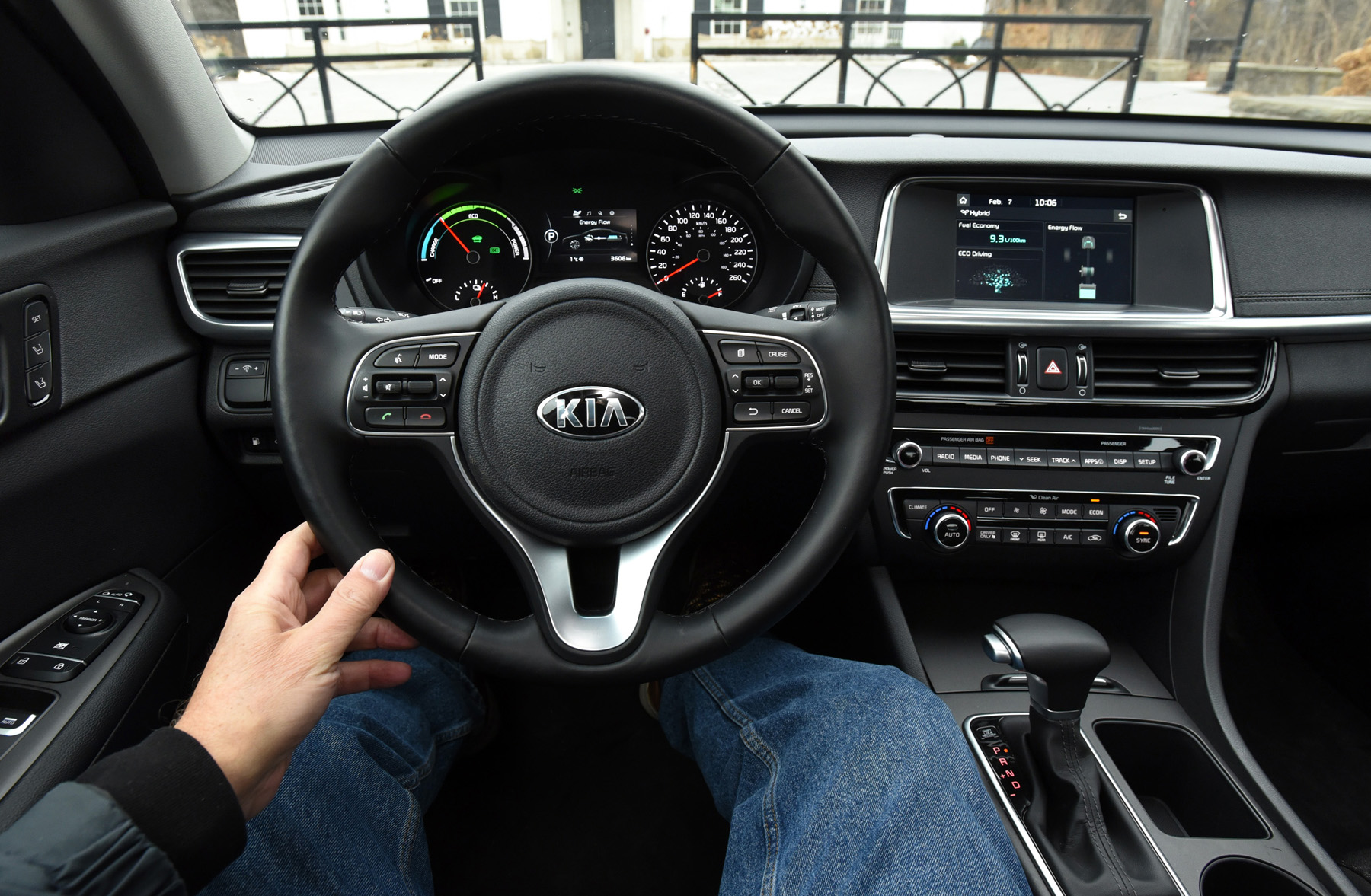 The exterior treatment also separates this HEV from the rest of the Optima herd via hybrid-exclusive LED headlights, satin finish trim and “EcoHybrid” badging.

The new 2.0-litre is also mated to a normal six-speed Sportmatic transmission instead of the normally expected CVT, eliminating the usual WWI airplane-like constant droning of CVT operation. A new electric oil pump and electric water pump add to the fuel economy equation.

And, as much as this might seem targeted towards an impressive fuel economy rating of 6.0/5.1L/100km (city/hwy), the added and rather instantaneous electric torque also bolsters the accelerative snap off the line. 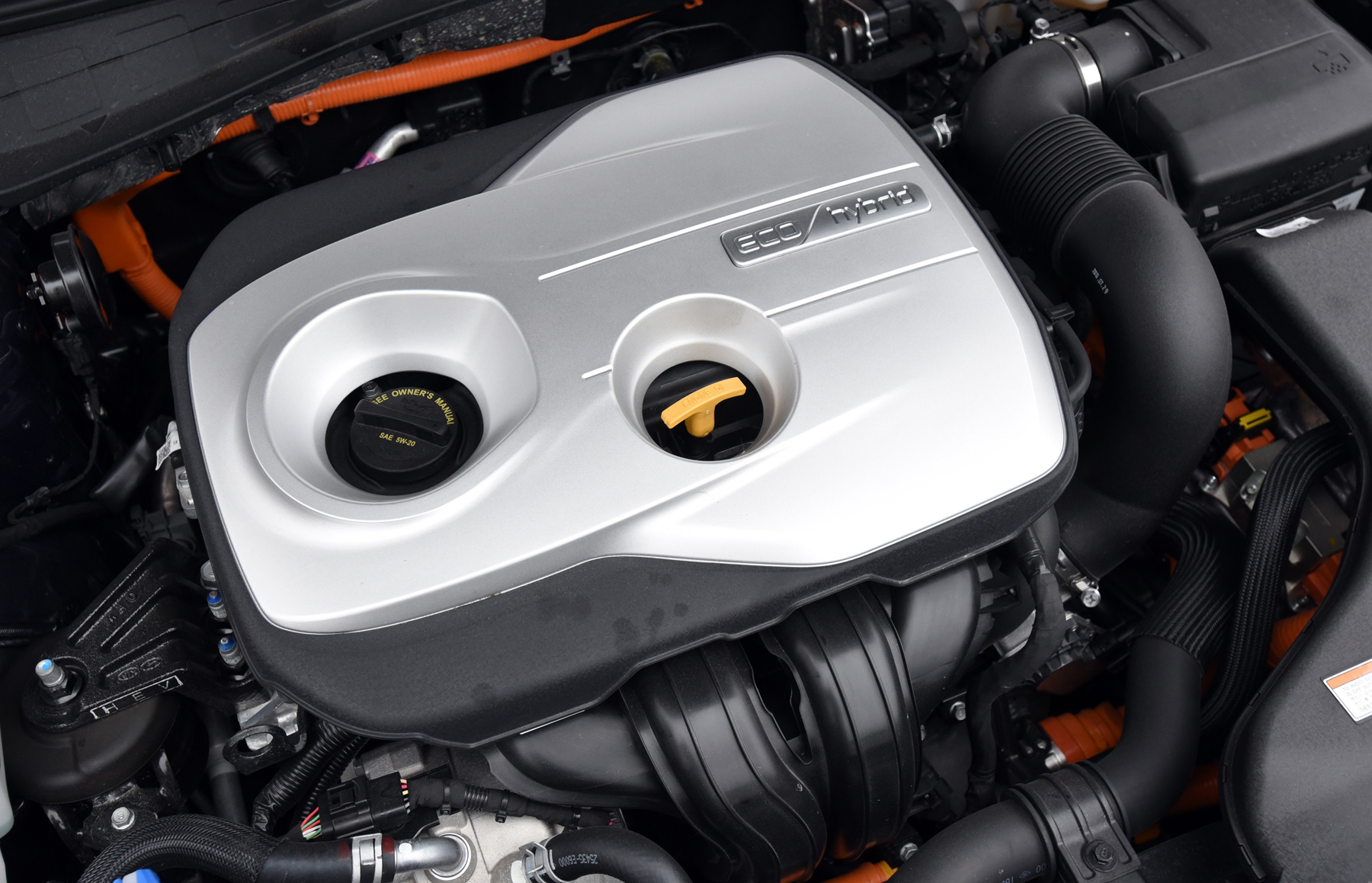 It’s pretty impressive, even with the extra 130 kg or so of ancillary hybrid mass. And there’s still plenty of pep left over at cruising speeds for mid-range passing maneuvers.

Providing that oomph, another integral change for 2017, is a new, more compact and lightweight high-density lithium-polymer battery pack with a 13 percent power increase to 1.62 kWh.

Packaged to now fit neatly underneath the trunk floor, the new layout results in a larger load space and, unlike many hybrids, now also allows for practical 60/40 split-folding rear seats.

These refinements are already evident in our base tester LX hybrid ($29,995) and a long list of upgraded standard equipment and optional extras are available through two more upscale trim levels – the EX ($33,895) and EX Premium ($39,395).

I’m not about to argue the economic justifications of a hybrid purchase.

That choice reflects a personal commitment to conscientious sustainability that customers have to make on their own, balancing the hybrid price premium against reduced emissions and the pleasure of passing by fuel pumps more frequently.

But for those ready to make that kind of commitment, the 2017 Kia Optima HEV offers a viable alternative as a hybrid choice that blends the latest in classy styling and cutting-edge technology. 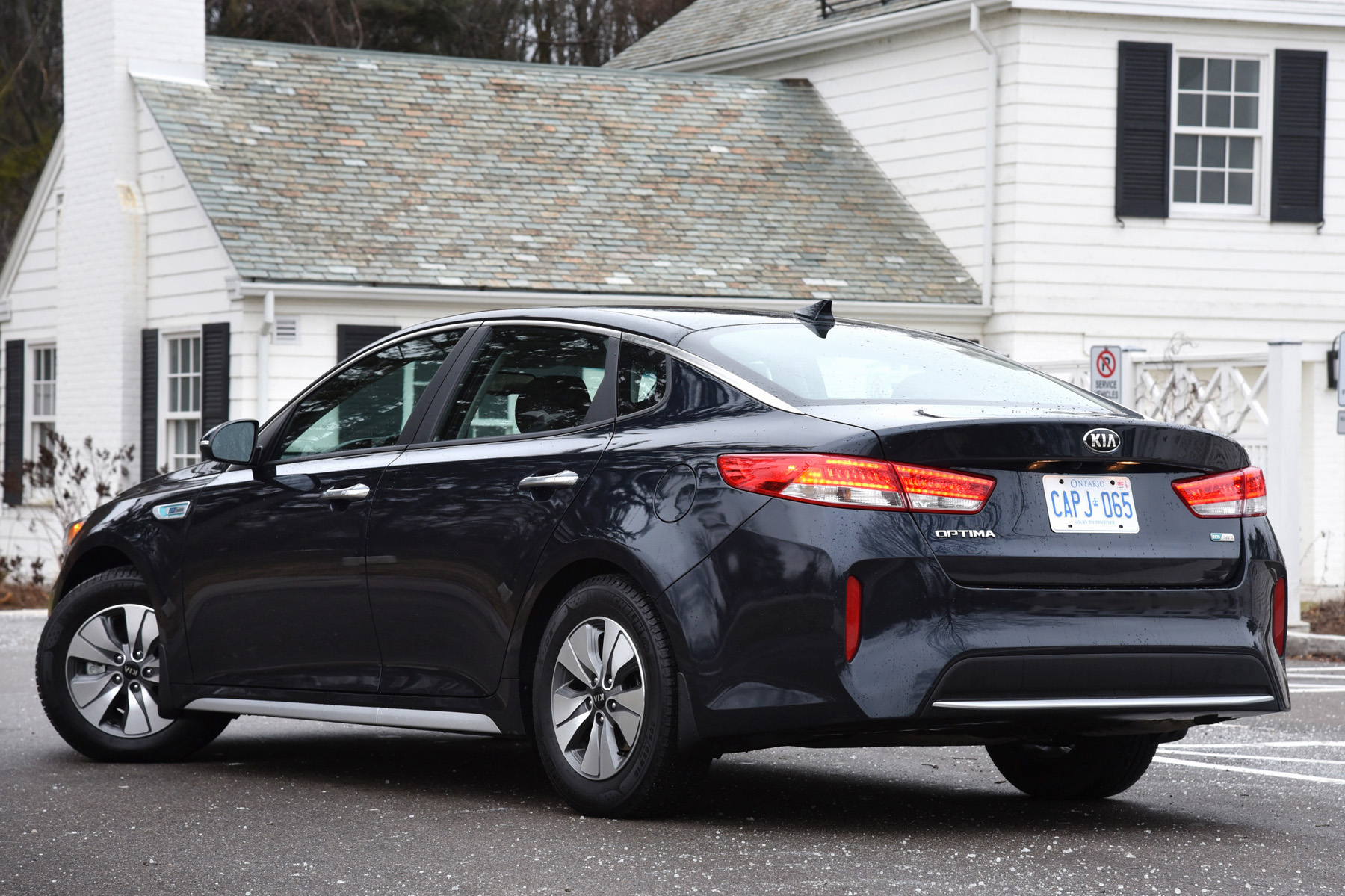