That’s the dollar amount in rebates available under the Province’s much-enhanced Electric Vehicle Incentive Program, and that doesn’t include the extra $1,000 towards the installation of a home 240-volt charging station.

What about the Tesla with its monster battery? It rates only $3,000 because there is a cap on any electric vehicle costing more than $75,000. 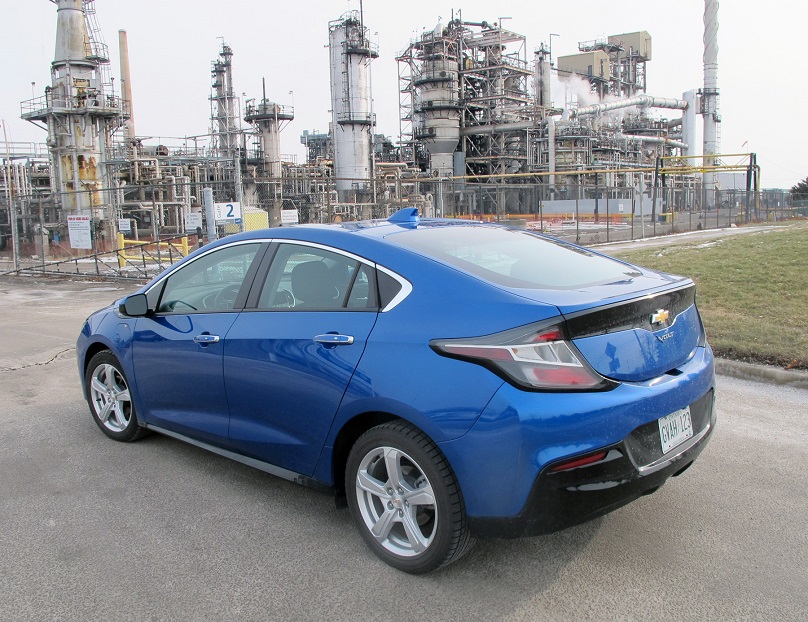 The Voltec drive system is based on the T-shaped battery that runs down the spine, with the engine/generator/drive unit at the front driving the front wheels.

The battery and drive system have an eight-year/160,000 km warranty. 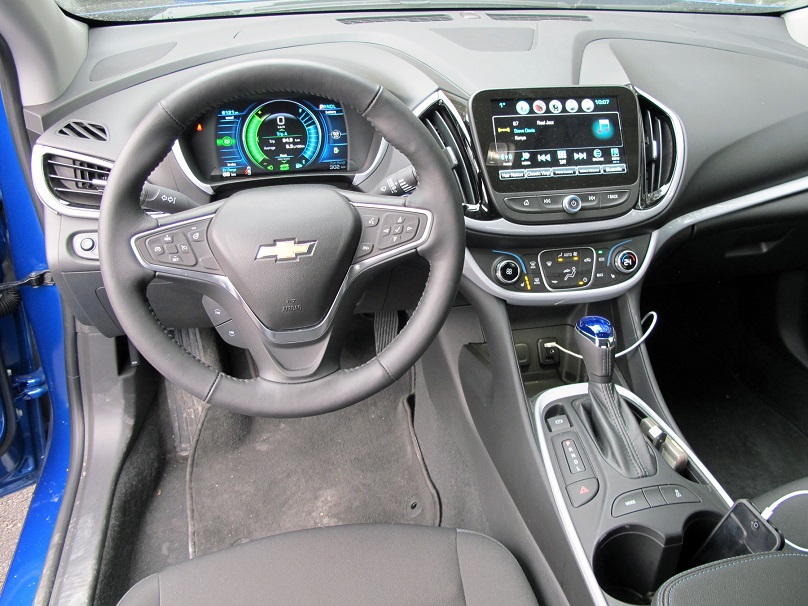 There are two models – the LT as tested here and the higher trim Premier.

The styling for 2016 is much changed, with many seeing a nod to the Corvette as a design influence.

In interior is more intuitive, with cargo volume at 300 litres (10.6 cu ft). There are seat belts in the back for three passengers but it really is just for two. 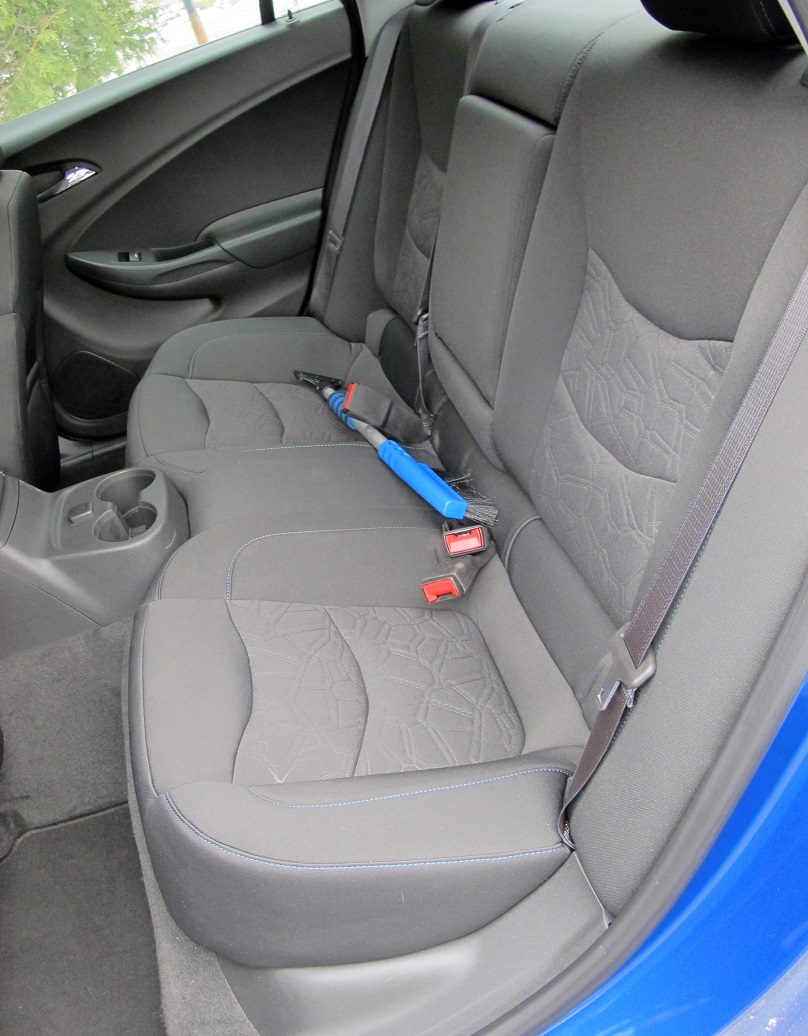 The instrument panel is redesigned and is pretty simple, with a main power delivery screen where the tach and speedo usually go. It is augmented by a tidy centre stack dominated by an eight-inch touch screen with MyLink connectivity.

Apple CarPlay is standard and the OnStar basic plan is good for five years from date of purchase.

A nifty item is the RemoteLink app that allows you to start, lock and check battery level as well as how much range remains.

But the Volt is all about making the most of what an extended range vehicle can do.

Volt is driven electrically, with the engine there to crank the generator, which feeds power to the battery and, thus, the drive.

According to NRCan, range on battery is up to 85 km, with the engine then kicking in and providing enough juice to reach a combined total of 676 km. 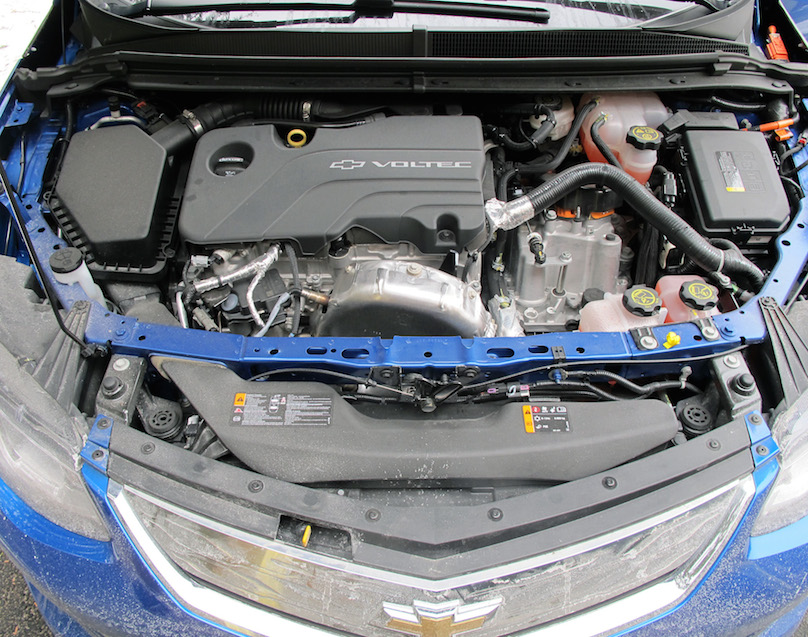 I tried to drive the Volt every day less than 60 km and never once did the engine join in because I was using a lot of regenerative braking.

One day, I did have to take a 220 km trip and started using  the battery along on the highway at highway speeds, so the battery was depleted after about 65 km.

That’s when the engine took over but, nonetheless, I was able to hit 120 km with a fuel consumption reading of 5.4L/100 km. That is (Cdn) 52 mpg which I’d be thrilled to have from any car.

To increase efficiency, the driver can select between four drive modes – Normal, Sport, Mountain and Hold.

The latter is the most interesting for those on longer trips. It allows engine use only on the highway, saving the battery for urban usage.

The driver info screen is large and easy to see at a glance, with a large centre ring with battery level in green on the left and the fuel level in blue on the right with driver info like fuel consumption in the centre. 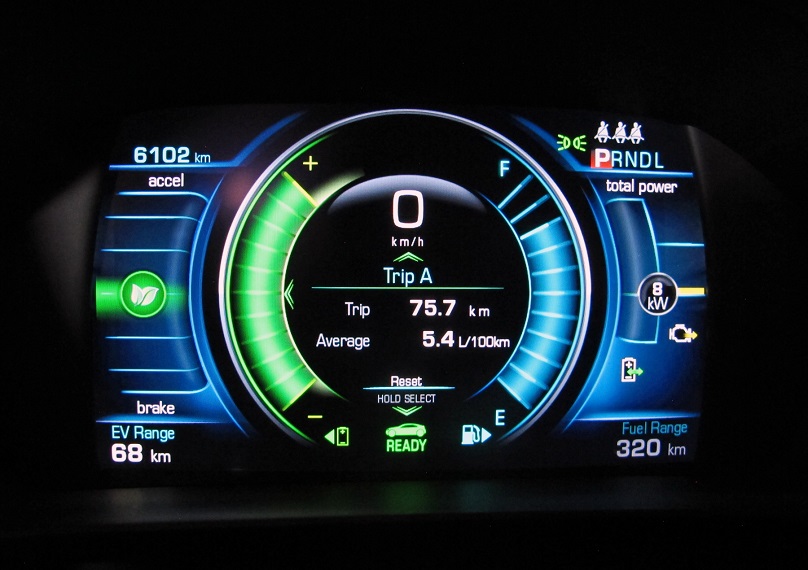 On the outside left is a little green ball that goes up as power draw increases and down when regen is charging the battery. To the right is a black ball that gauges total power consumption.

Best thing is it’s intuitive, and because it is large, you can keep your eyes on the road ahead and still see what is going on at the same time.

I’m not a big electric car fan as I consider fuel cells to be the only sustainable long-term answer.

But with that new rebate, and the freedom of knowing you can go more than 600 km in one go at around 5.5L/100 km, it makes the 2016 Chevrolet Volt a very attractive proposition.