2015 Nissan Micra cup is agile, urban, fun-to-drive and durable, and it's global V platform underpins more than one million vehicles per year.

When you think of auto racing, econocars like the Nissan Micra don’t usually spring to mind. Not that I’m a race fan. Nor do I spend any serious time following Formula 1, NASCAR, IndyCar or Le Mans, although I’ve attended the odd event.

Nissan however, does have a long history in motorsports. It began in 1936 with the 22-hp Datsun Sports NL75 that competed in the All Japan Tamagawa Auto Race Meet and continues with such leading-edge efforts as the 1250-hp GT-R LM NISMO hybrid racecar that will debut in this year’s 24 Hours of Le Mans.

But racing today is about more than big power and stratospheric budgets, as there are still outlets for regular folk who like to go fast, but lack the skills to attract the deep pockets of Virgin and Red Bull.

Spec racing is one such opportunity. And within the genre, arguably the most affordable at least in Canada is the newly launched Micra Cup series, presented by JD Motorsport and Nissan Canada. 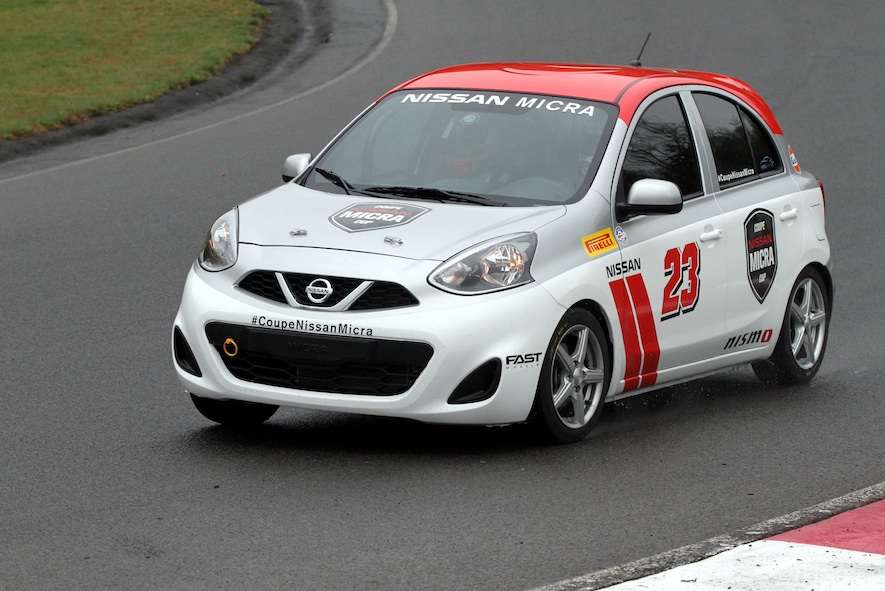 The first two of 12 races, over six weekends in Quebec, begins on May 22 at Circuit Mont-Tremblant, where Canadian and American journalists recently gathered to drive these cars on the rain-soaked track.

We weren’t, of course, being turned loose on this world-class circuit to bang it out in one of Canada’s cheapest rides, but were turning laps with a race instructor riding shotgun. A wise format, at least for these pristine, race-prepped Micras.

But before being outclassed by my colleagues, I had the opportunity to learn more about the cars and the racing series, which Nissan Canada President Christian Meunier refers to as affordable racing for the masses. 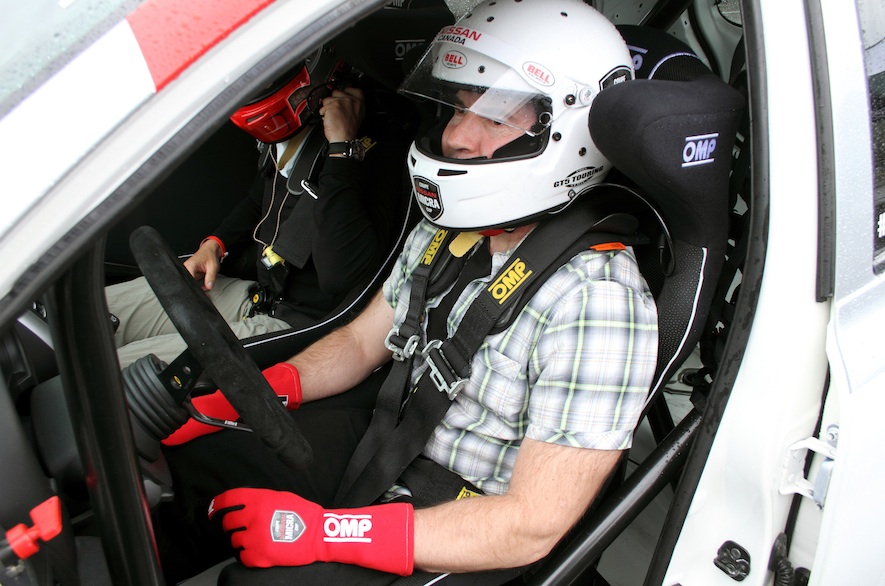 He describes the Micra as agile, urban, fun-to-drive and durable, and on that last point, it is worth noting that Micra’s global V platform (shared with Versa Note and Sedan) underpins more than one million vehicles per year.

The Micra itself has undergone more than two months of winter road testing in Quebec, and has logged over 1,600 km at Targa Newfoundland 2014. These were stock Micras, but the race-modified version has also undergone 35 hours of intense track testing for the series.

The base vehicle is no slouch. I’ve driven the $9,998 Micra (manual windows, locks, and no A/C) and found it solidly-built and nicely finished inside, with good composure at highway speeds, although it can get buffeted in strong winds.

Its 1.6-litre DOHC four cylinder engine (109 hp and 107 lb/ft) is mated to a five-speed manual transmission. Shifter action is rubbery, but no matter as this is the best way to route power to the front wheels of this 1,044 kg (2,302 lb) vehicle. 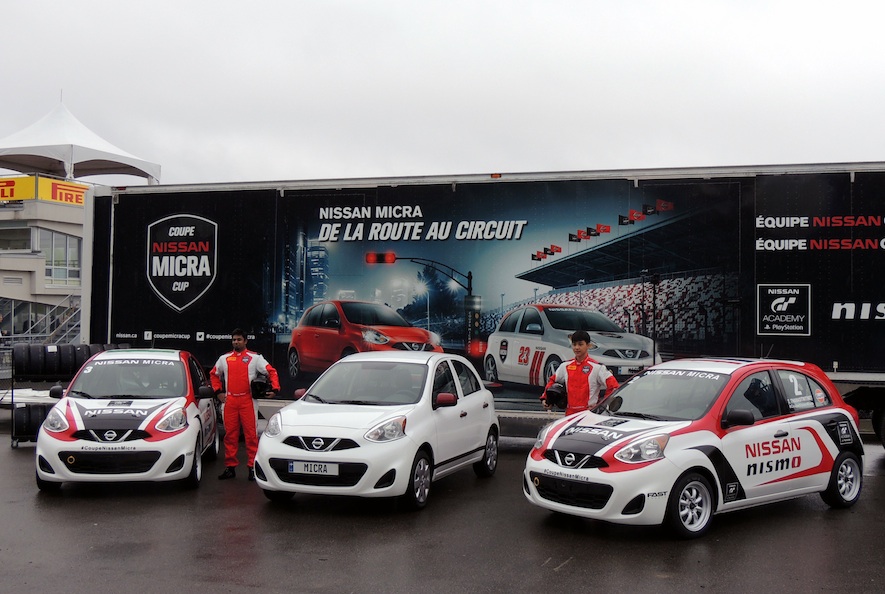 Plant the pedal and it jumps off the line, and with Micra’s wide track, small turning radius and wheels pushed to the corners, handling is tight and nimble.

It’s a good base for the Cup vehicles, which are all sent to Motorsports in Action (MIA) in St-Eustache for modifications. The suspension is upgraded, but there are no enhancements to the engine, chassis or transmission.

To accommodate these mods, the interior is gutted, resulting in significant weight loss. Car and driver must tip the scales at only 2,250 lbs. The end result is a race-ready Micra for an all-in price of $19,998.

Sadly, these aren’t street legal, so you’ll have to buy a trailer. Which, along with tires, servicing/repairs and entry fees will add about another $20K to the first season. Expect your wallet to take a much smaller hit in year two, making the series competitive with a season of karting.

A typical race weekend includes a 30-minute trial, a 30-minute qualifying session, and two 30-minute races. With all vehicles identical, success is entirely in the hands of the driver.

Which in my case wouldn’t seriously challenge this year’s mix of seasoned racers and up-and-comers who will be competing for the Cup.

That still didn’t stop me from pushing my limits in a car that with rain tires and an even better power-to-weight ratio, was a blast on this 15-turn road course.

The instructor in my ear made the blind corners and elevation change less uncertain, and my line kept improving with each lap, despite some of the apexes being under water.

With my eyes fixed firmly ahead, I didn’t once glance at the speed, although I’m told that speeds were peaking at around 165 km/h. That felt plenty quick in the Micra, at least for my skill level.

There was no shortage of more talented drivers on hand, including two graduates from the 2014 Nissan PlayStation GT Academy, Abhinay Bikkani from Bangalore, India and Thanaroj Thanasitnitiket from Bangkok, Thailand.

This program turns gamers into racers, which to the old schoolers’ may seem to be a stretch. It has, however, discovered some gifted drivers since 2008, proving that the skills and mental agility for success in gaming are transferable to the track. Maybe I should have spent more time playing Gran Turismo.

There are no plans yet to expand Micra Cup from Quebec to the rest of Canada, but depending on its success, Nissan does have an eye on Ontario, where there’s also an appetite for local and affordable, grassroots racing.