VICTORIA: As much as it enjoys mushrooming sales of CUV/SUVs, Chevrolet doesn’t want consumers to forget about the wide of range of sedans it offers, such as the 2016 mid-size Malibu.

The Malibu was introduced more than 50 years ago in the segment that is still strong, but no one can ignore the impact light utility trucks are having.

That means Chevrolet, like all its competitors, has to offer sedans with incredible build quality, that are content rich and all for a price that makes it an attractive alternative to a crossover. 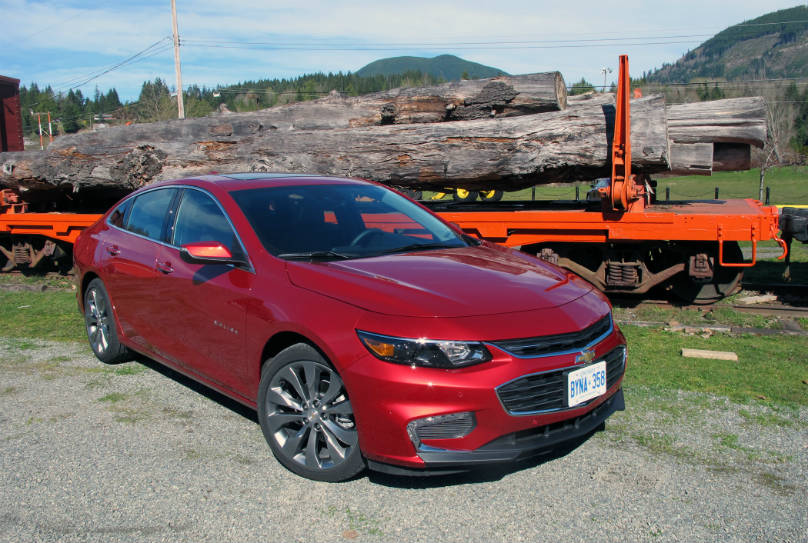 While still classified as a mid-size sedan, Malibu approaches full-size in the flesh with a 91 mm (3.6 in) longer wheelbase compared to the outgoing model, resulting in a 33 mm (1.3 in) increase in rear legroom and trunk that now has 15.8 cu ft of cargo space.

Thanks to the advances made in combustion engine efficiencies, Malibu does not need a V6 or V8, but offers a choice of two turbo four-cylinders and a hybrid with four-cylinder. 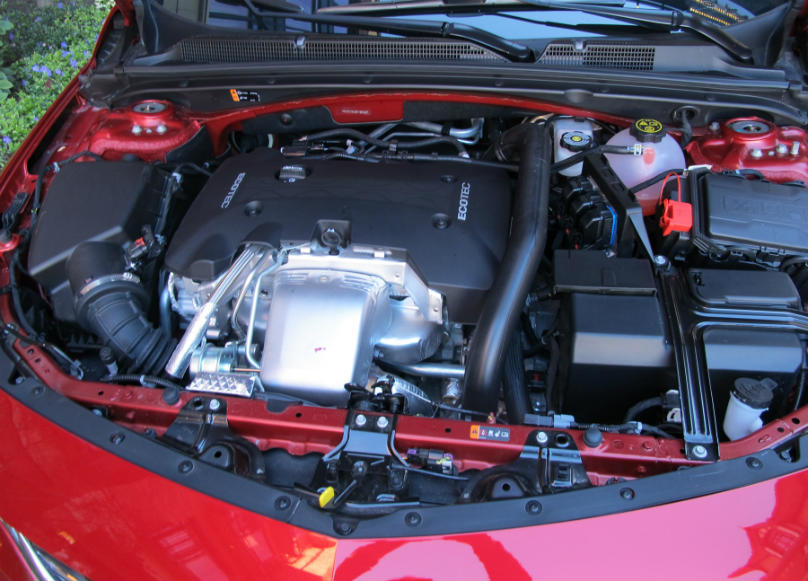 Standard powerplant on the Malibu is a new 1.5-litre turbo, which is much smaller than the 2.5-litre it replaces, with 163 hp and a stout 184 lb/ft of torque with a six-speed transmission driving the front wheels.

A higher output turbo 2.0-litre with 250 hp and 258 lb/ft of torque is mated to a new eight-speed automatic, the first time an eight-speed has been used on a GM front-drive vehicle. 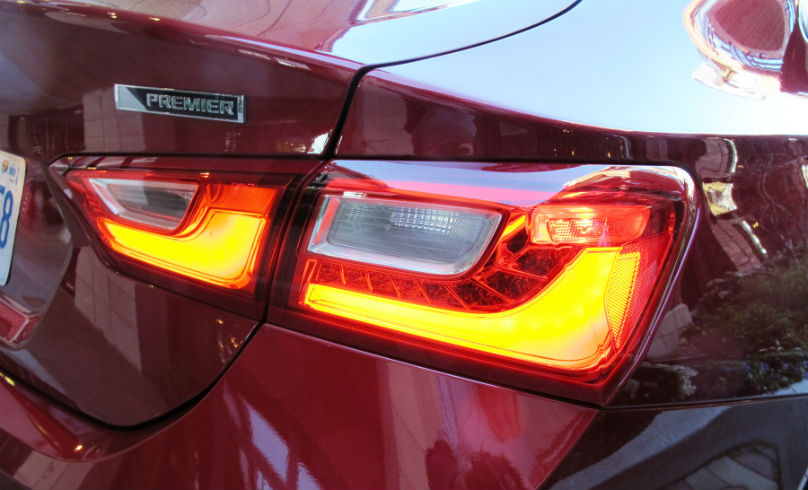 The third variant is the Hybrid with new 1.8-litre turbo and two-motor drive unit derived from the Volt. With an 80-cell, 1.5 kW lithium-ion battery, the Hybrid can reach 88 km/h (55 mph) on electricity alone. Above that speed the engine kicks in automatically.

Chevrolet had all three versions of the Malibu at the press preview in Victoria and came up a long and varied drive route, where I drove both gasoline versions starting with the 2.0-litre in the Premier.

It was set up with Chevrolet’s innovative Teen Driver technology activated, which lets parents view on a display how their teenager drove the vehicle. Maximum speed reached, distance driven and number of times active safety features were engaged are among things monitored.

After the first leg with the Premier, the “report card” on my co-driver and I showed we had exceed the pre-set speed limit, which I think was about 110 km/h 22 times, which was not surprising as one long stretch was on the Trans Canada Highway where the speed limit is also 100 km/h and we were cruising around 110 km/h.

But it also showed four times when stability control came on, which was probably on a logging road with lots of potholes. I never felt the stability control engage, but it was certainly interesting to see the readout.

Speaking of safety, the 2016 Malibu comes with a rear view camera and 10 air bags standard plus, depending on trim level, a host of available features such as Front Pedestrian Alert, Forward Collision Alert, Adaptive Cruise Control and Intellibeam, which automatically switches the headlamps to high beam for better road illumination and improved visibility.

On the way back, we drove an LT with the 1.5-litre, which is expected to be the volume model. 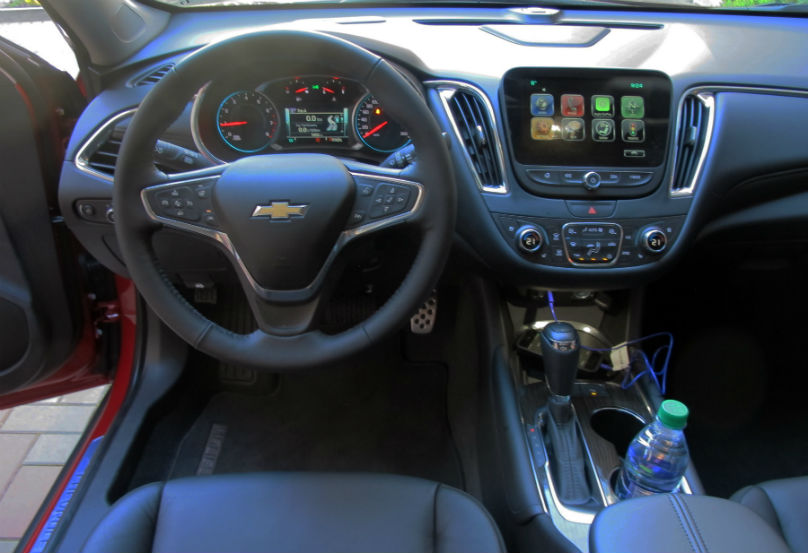 When I drove it late last year at a first-drive event, I found the 1.5-litre with its six-speed automatic adequate in most conditions, but I thought a few extra horses would do.

But on the return journey along B.C.’s coastal Highway 14, the LT was a pleasure with very supple suspension soaking up the countless ups and downs.

Engine response was immediate, which got me thinking of what turbos of just a decade ago were like with their off-on boost. 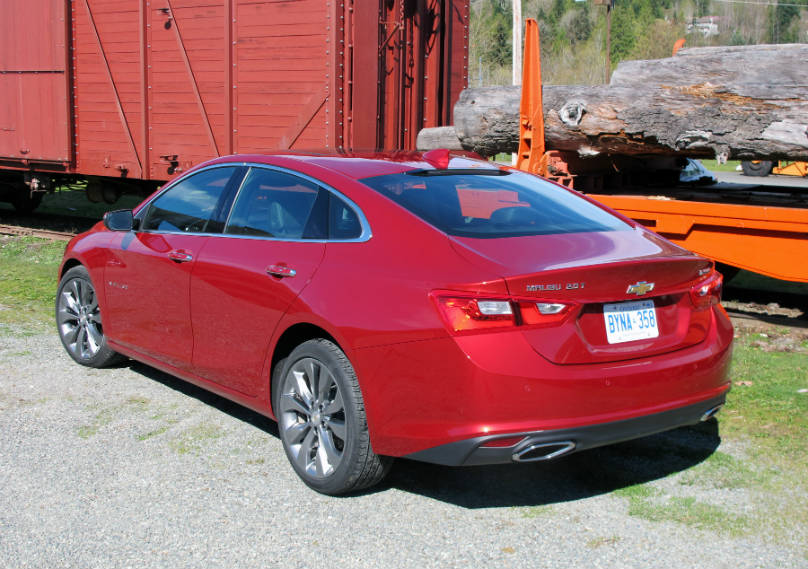 Both the Premier and LT were equipped with the MyLink infotainment system with seven-inch touchscreen with Android Auto and Apple CarPlay.

CarPlay allows drivers to make calls, send and receive messages and listen to music right from the touchscreen or by voice via Siri. Apple CarPlay supported apps include Phone, Messages, Maps, Music and compatible third-party apps.

Android Auto is built around Google Maps, Google Now and the ability to talk to Google, as well as a growing audio and messaging app ecosystem that includes WhatsApp, Skype, Google Play Music, Spotify, and podcast players.

But the overriding impression was how much the Malibu felt and looked like an entry-level luxury sedan, not a family hauler.

Consumers seem to have noticed, because Malibu sales are up 65 per cent which shows Chevrolet’s message is getting across.