Mid-cycle refresh for mid-size Honda Accord

Like the rest of its stable mates, the Accord Touring builds on a new, more structurally sound platform featuring reinforced components, and in this trim level, also benefits from bigger front brakes and upsized 19-inch wheels and tires.

Let’s turn the clock back 40 years and picture the launch of the then all-new 1976 Honda Accord, a new “bigger small”, as the press release of the time put it.

And, yes, it was a three-door hatchback, larger than the diminutive Civic it was following up on, but still officially rated a subcompact with a wheelbase footprint smaller than that of the current Honda Fit.

My, how things have changed.

Flash forward to 2016 and, after nine generations worth of upsizing, upgrades and upticks of construction quality, new content levels and new technologies, the current mid-size, almost full-size Accord has evolved with the kind of premium panache that makes you want to squint to see if it’s not actually wearing an Acura badge. 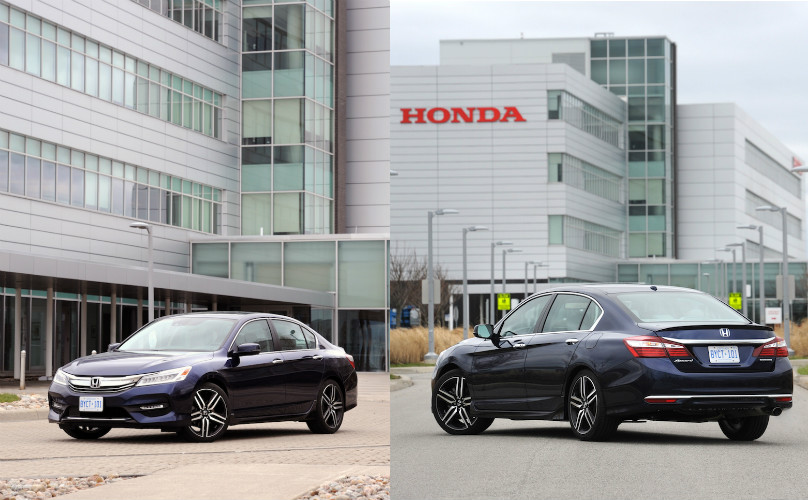 And, maybe we should make that nine and a half generations of Accords because, for the 2016 model year, the Accord lineup has been further refreshed with a mid-cycle makeover.

Like the rest of its stable mates, the Accord Touring builds on a new, more structurally sound platform featuring reinforced components, and in this trim level, also benefits from bigger front brakes and upsized 19-inch wheels and tires. 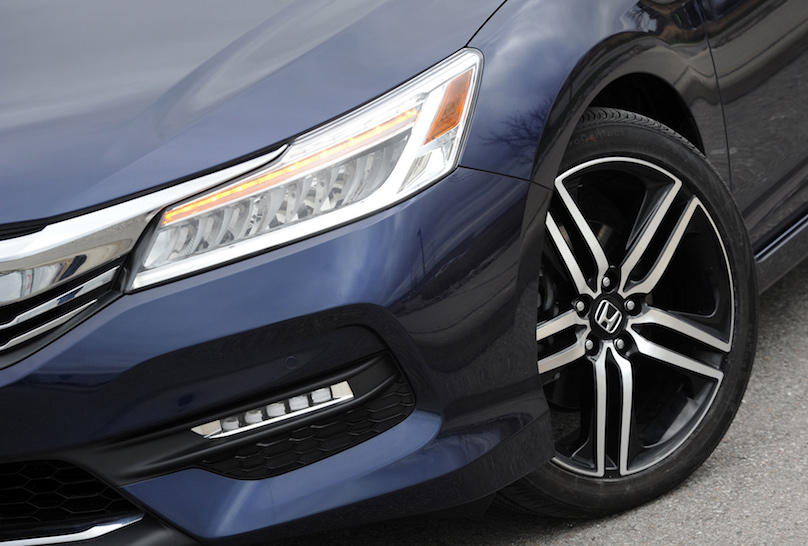 The edgier design is echoed in back with new LED tail lamps, a more aggressive rear bumper fascia design and our Touring model also adds new side-sill garnish and a rear deck spoiler.

For the 2016 model year, all Accords feature a standard Multi-Angle Rearview Camera built into the passenger side exterior mirror, displaying blind-spot imagery on screen for the driver. An Expanded View Driver’s Mirror aids visibility on the driver’s side. 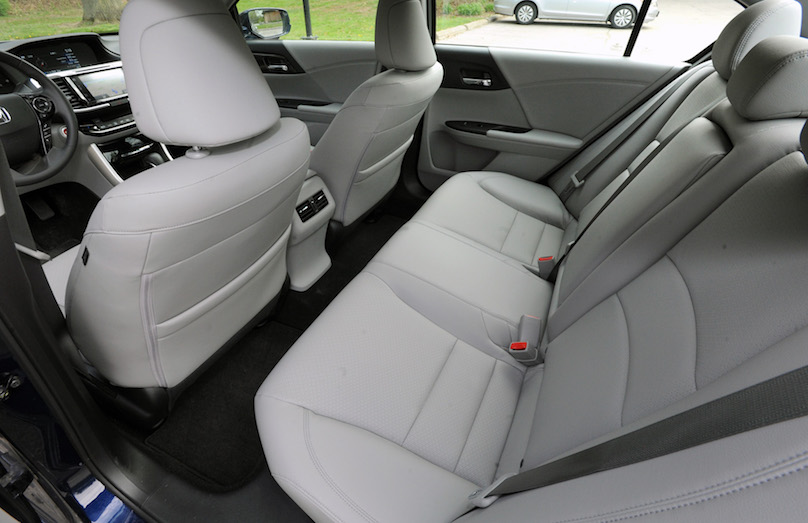 A 7.0-inch Display Audio screen benefits from the application of Apple CarPlay and Android Auto.

It offers a variety of features and functions including voice-controlled text messaging, smartphone-linked navigation and audio streaming, operated through a touch screen that, like smartphones, lets users tap, pinch and swipe to access data. 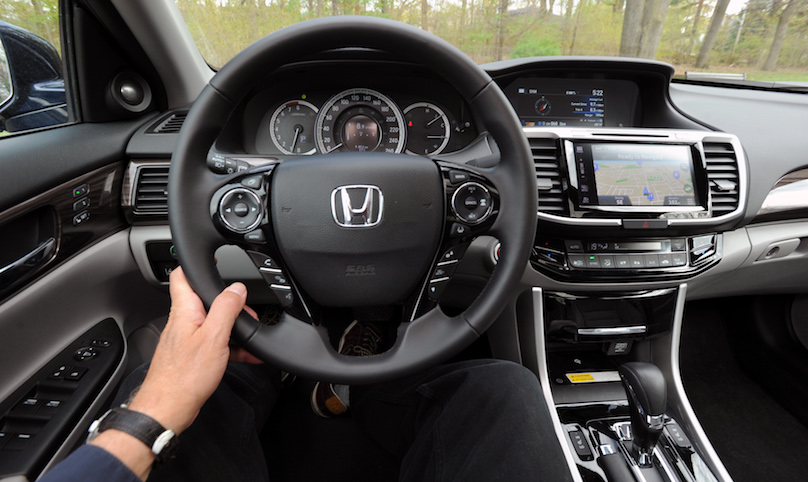 Whew! All pretty impressive, even though old dinosaurs like me still lament the loss of radio tuning knobs.

But we should wrap up this techno party by mentioning the new Honda Sensing package that bundles the latest in safety and driver-assistance technologies, including Collision Mitigation Braking System with Forward Collision Warning, Road Departure Mitigation with Lane Keeping Assist and Adaptive Cruise Control.

This Honda Sensing package is a $2,300 option on the LX and Sport trims and comes included on EX-L and Touring trims.

Under the hood, our Accord Touring harnesses the standard 2.4-litre direct-injected i-VTEC four-cylinder engine making 185 hp and 181 lb/ft of torque with power translated through either a six-speed manual gearbox or, as tested here, a CVT automatic transmission ($1,900). 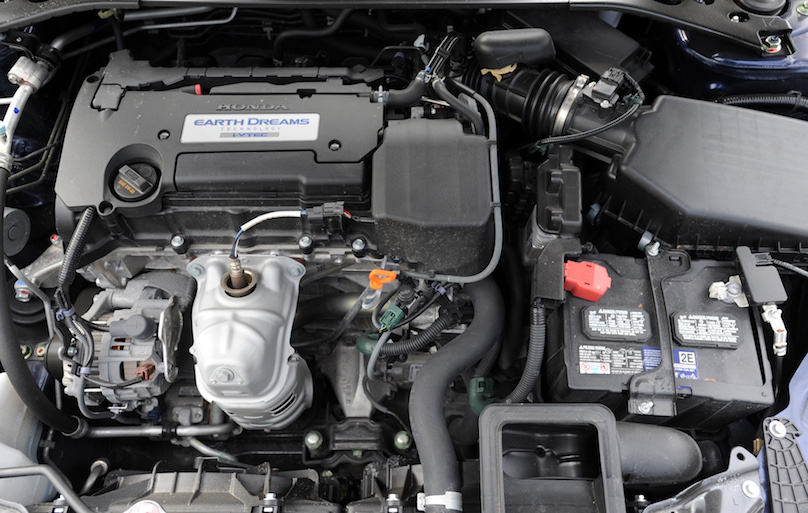 My real world results of mixed driving averaged out to 7.9L/100km (comb).

Honda also offers a 3.5-litre VTEC SOHC V6, the most powerful engine offered in a Honda sedan to date, bolstering the overall oomph to 278 hp and 252 lb/ft of torque with a bit of a corresponding pump penalty in fuel economy at 11.3/7.0L/100km (city/hwy).

The V6 would add $4,900 to the Touring price, maybe an acceptable premium for performance die-hards but customers won’t find much lacking in a regular Accord Touring model, courtesy of a spirited four-cylinder, smooth ride and handling and the latest in technologies and amenities, nicely bundled in one of the best-selling mid-size family sedans in the automotive industry.

And the Accord hasn’t stopped evolving yet.

Look for new Accord Hybrid versions boasting more power and improved fuel efficiency, slated to go on sale later this summer, pushing the Accord performance envelope even further with new variations on the theme of Honda’s most popular mid-size model.

Honda Accord Touring Sedan 2016 at a glance