Mercedes C-Class is a Fab Cab

TRIESTE, Italy: I can’t remember when I have attended a “first drive” of a vehicle that had more “innovations” than the 2017 Mercedes-Benz C-Class Cabriolet.

TRIESTE, Italy: I can’t remember when I have attended a “first drive” of a vehicle that had more “innovations” than the 2017 Mercedes-Benz C-Class Cabriolet.

In fact there are 22, which I will be able to touch on in this space but one is the (optional on all models) Pre-Safe Brake Pedestrian Recognition feature.

It uses a front-mounted 3D camera and sensors that start braking with vehicles ahead doing 7-200 km/h, or pedestrians, slow moving objects at 7-72 km/h and, of course, stationary objects. 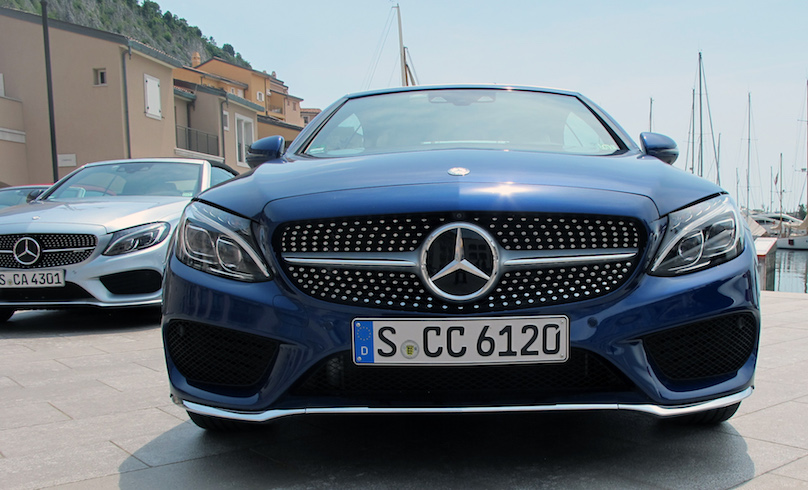 When something is detected, there is a visual and audible warning. If the driver does not react, the C-Cab starts autonomous braking and is capable of preventing accidents with pedestrians and stationary objects up to an initial speed of 50 km/h.

It features a new nine-speed automatic transmission with start/stop technology and 4Matic all-wheel-drive. 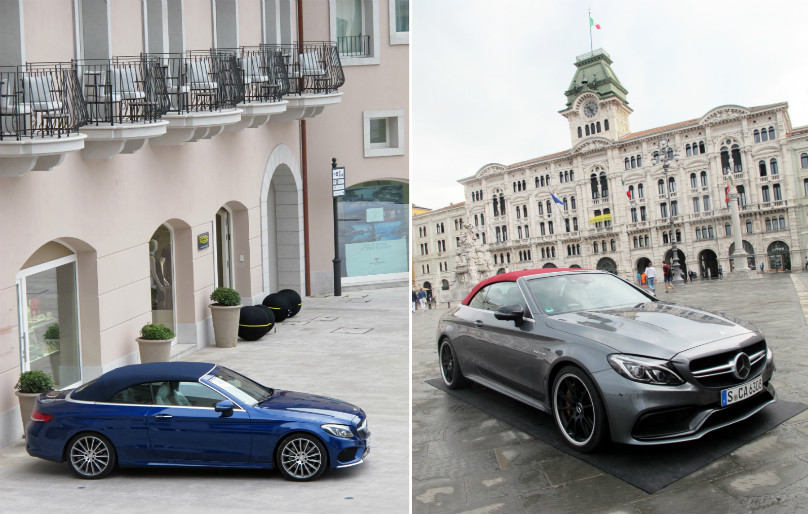 The AMGs boast a more dynamic 4Matic all-wheel-drive with 31 per cent of the power to the front and 69 per-cent to the rear.

Fuel consumption numbers won’t be available until closer to when it goes on sale in the fall.

The drive route crisscrossed the Italian/Slovenia border with surprisingly well-paved roads that were absolutely perfect for the car.

Although there were some Canadian spec models there, I wanted one painted blue because of the colour of the sky and Adriatic Sea. Thus, I got a C 400, which is roughly the same as a C 43 we will get here without the higher power AMG engine and stiffer AMG suspension/drive mode.

My very experienced co-driver and I both agreed the C 400 should be in the Canadian mix.

Engine response from the 3.0-litre twin turbo was immediate, showing that Mercedes has eliminated lag with something more akin to the punch of a supercharger.

The 4Matic AWD was flawless in ride and handling on some of the more narrow roads in Slovenia with no shoulders and cyclists everywhere.

Because there was no such thing as a long, straight stretch to pass, one had to plan and punch the pedal where the instant-on turbo proved its worth.

It was also a day of full sun and scattered clouds so it was top down all the way. 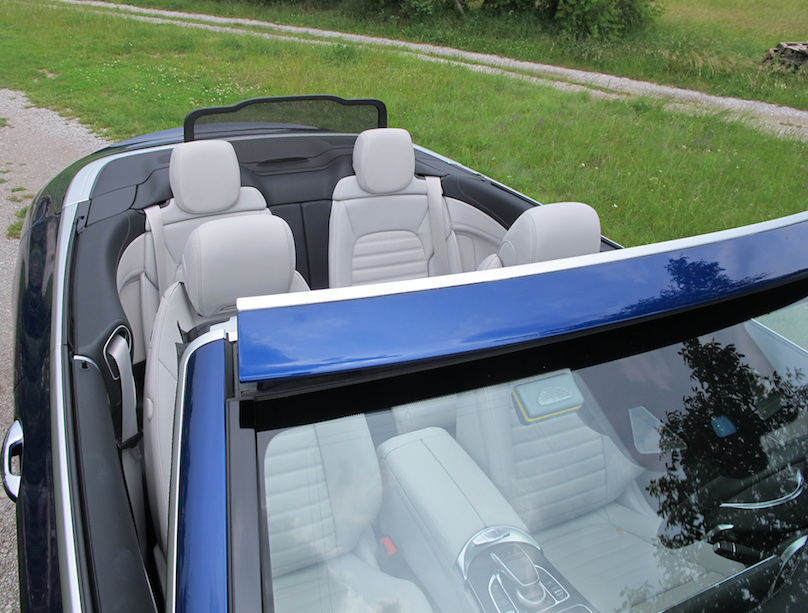 The Cabriolet comes standard with Air Cap comprising an upper front windshield panel like a leading edge slat on a jetliner with a mesh wide stop between the back seats that deploy with the touch of a button resulting in zero in-cockpit buffeting. With this, we could talk at a normal level and be heard except on one stretch of the Autostrada on the Italian side. 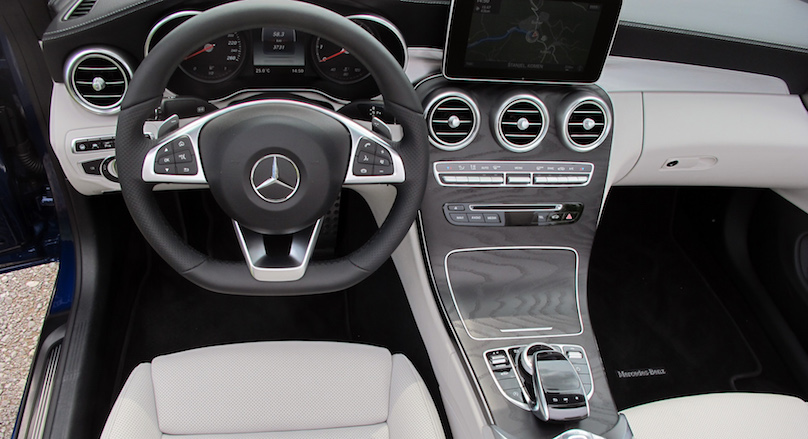 One thing that stood out was the clarity of the centre instrument panel screen, which was legible even in direct sunlight, something not possible just five years ago. 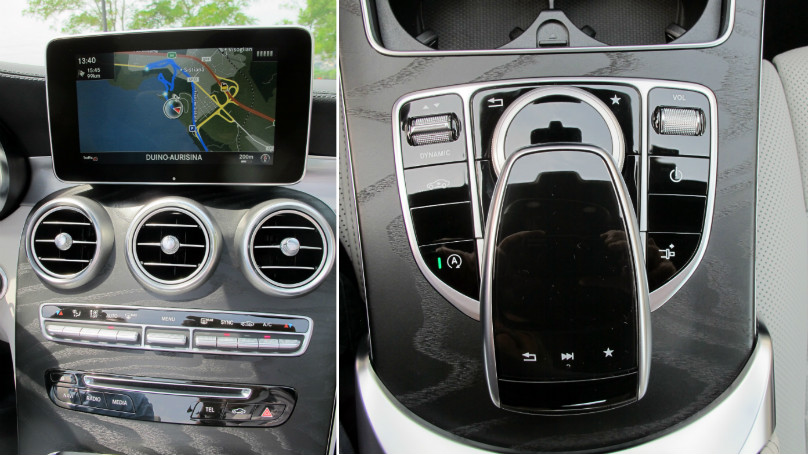 All new is the “acoustic soft top” designed for low road noise intrusion into the cabin and it raises and lowers at speeds up to 50 km/h.

Standard on all models, and really heightening the quality of grip, is Dynamic Cornering Assist, which works with the electronic stability control that measures the amount of understeer and reduces it by braking in the inside wheels.

At the same time, torque is slightly increased to compensate for the braking effort with the surplus torque routed to the wheel at the outside of the corner.

And adding greatly to overall driving experience was Dynamic Select, a little toggle on the centre console that can alter engine, transmission, suspension, steering even climate control for optimal performance by choosing one of five modes – Comfort, Eco, Sport, Sport + and Individual.

This plus Mercedes’ faultless 4Matic AWD meant we could really push through the endlessly winding two-lane roads in Slovenia, which weren’t much wider than a Canadian single car driveway.

Pricing will also not be available until closer to the time the Cabs go on sale in the fall, but they are well worth waiting for. 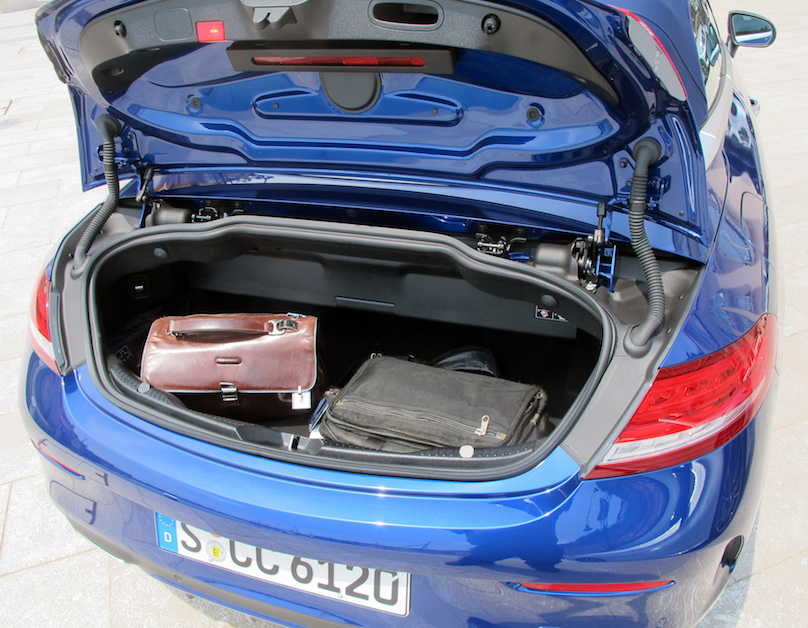 DRIVE METHOD: Front engine, all-wheel drive with a seven- or eight-speed automatic transmission depending on model.