Mazda’s CX-9 set for up to seven

There are times when you have to haul more than five people, which is where the 2017 Mazda CX-9 comes in.

For as long as I can remember, Mazda has had some from of people mover going all the way back to 1966 with the Bongo. It was also sold as the Nissan Vanette, the Ford Econovan in Australia and numerous iterations in Japan including (get ready for the name) the Bongo Brawny Wagon.

Of course, Canadians are more familiar with the MPV and Mazda5 minivans and the CX-7 and CX-9 crossovers. 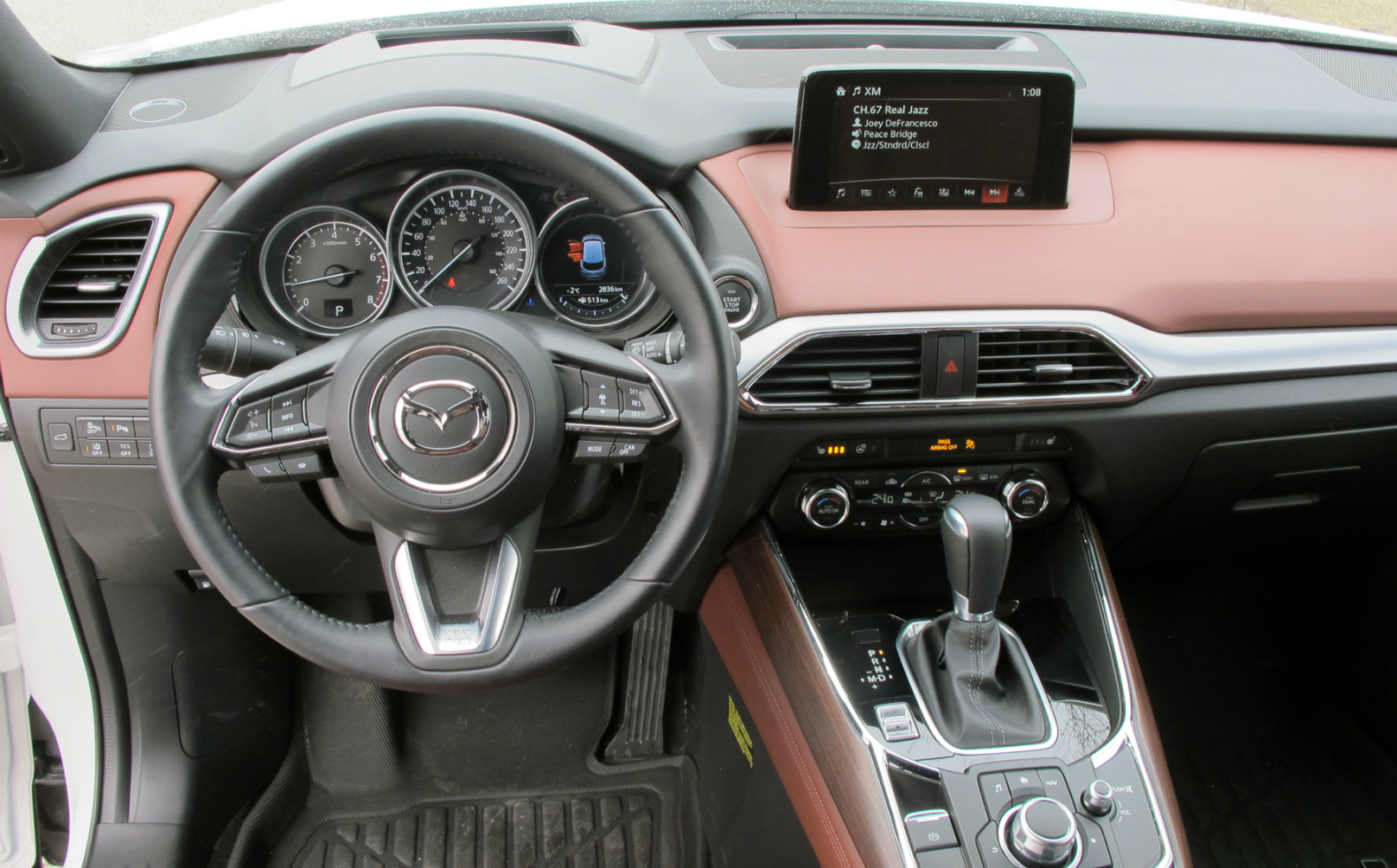 But with Mazda’s innovative Skyactiv suite of fuel saving technologies, bigger vehicles such as the CX-7 and now the Mazda5 were put on the back burner with no serious upgrading lavished on them.

That has changed with the new CX-9, a true seven-seater, but with all the Skyactiv efficiency features plus Kodo design language factored in.

One of the cornerstones of Skyactiv is gram counting, by which I mean Mazda designs everything with light weight in mind. Thus the new CX-9 is lighter than the model it replaces, although it looks larger.

But they do add weight when needed, such as 24 kg (59 lb) of extra sound deadening material below the floor.

Other design features are “driver centric” seating and placement of controls, a philosophy directly applied to all Mazda products stemming back to the first Miata sportscars.

It’s part of the company’s slogan “Soul of a Sportscar”. 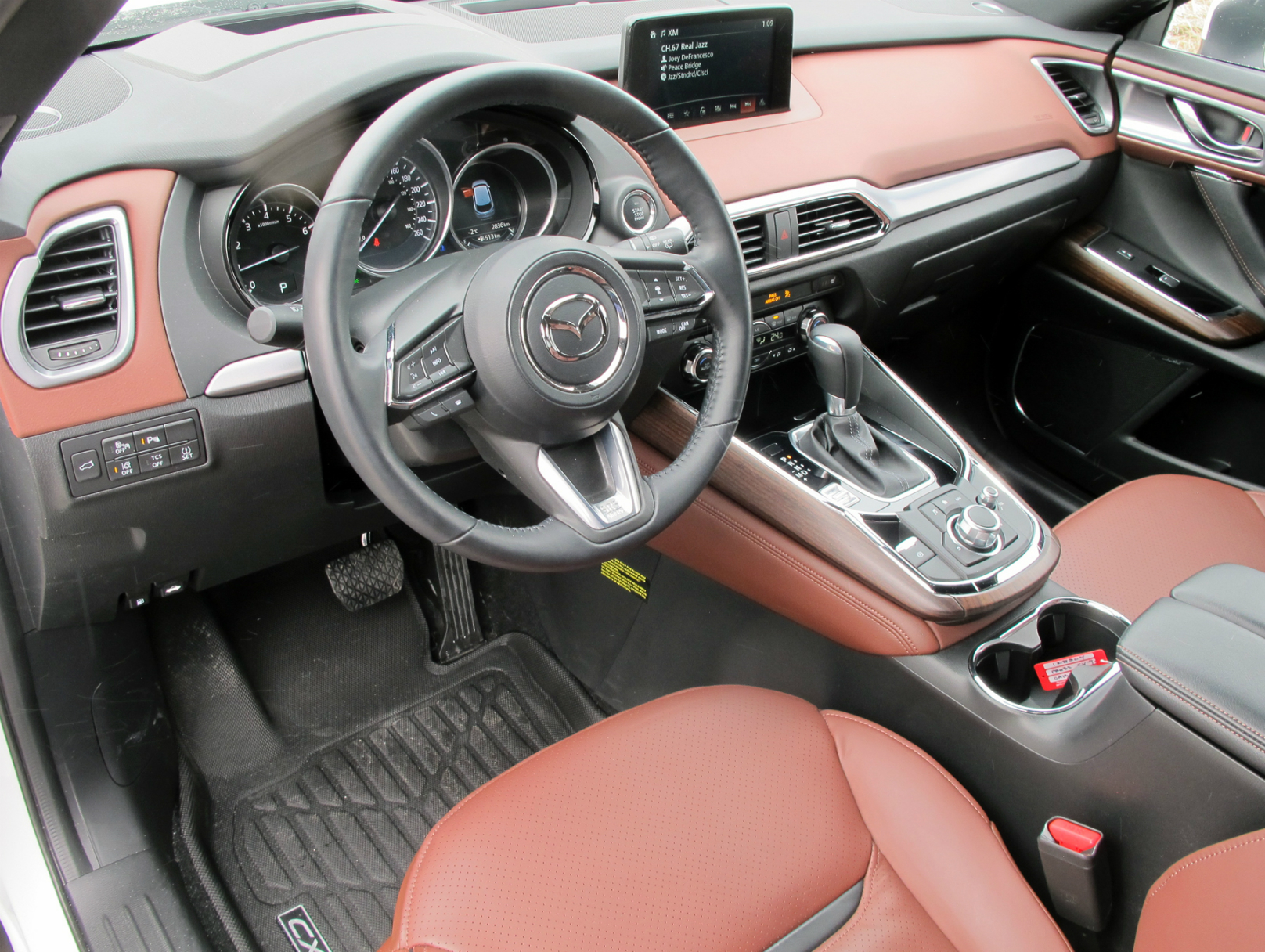 The now famous Kodo styling grille, vertically narrow side windows and high beltline, on the CX-3 subcompact crossover is not as dramatic on the CX-9 due to the length, but it still works.

There is one engine, Mazda’s now proven Skyactiv 2.5-litre direct injection inline four-cylinder, but with a turbo added that pumps up the power from 185 hp and 185 lb/ft of torque in the standard 2.5-litre unit to 227 hp and 310 lb/ft on regular gasoline.

Also Read: Ford has an Edge in family transport

Mazda says the CX-9 is mid-size, but looking at in the flesh, it’s sure full-size to my eyes. 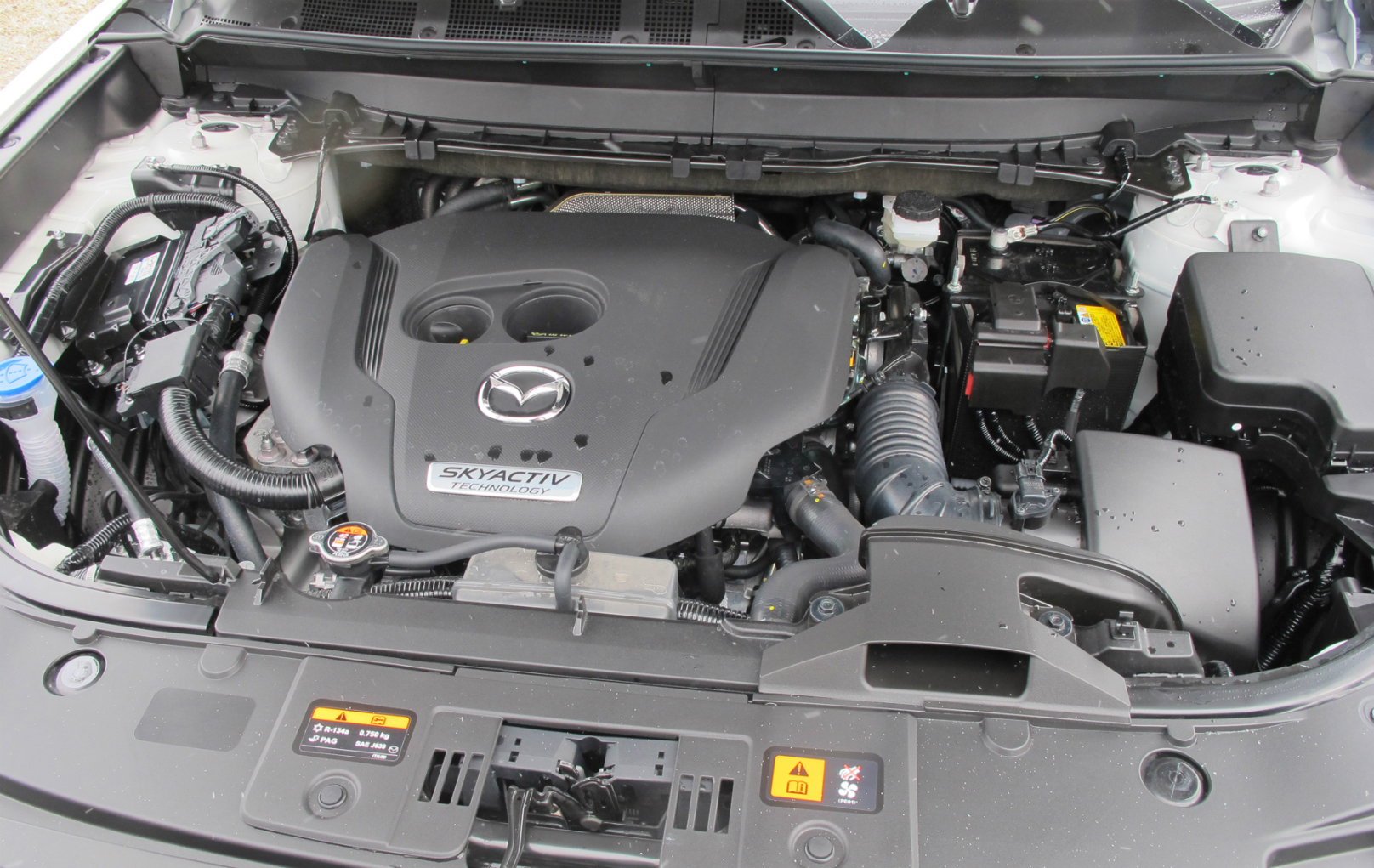 The RCTA is something every CX-9 owner should consider, as this is a long vehicle. On two occasions the RCTA detected people speeding between the lanes of parked cars in the local shopping mall as I was about to reverse.

The parking sensors, likewise, come in handy with the backup camera joining in to make backing into a spot easy where it would have been tougher without them. 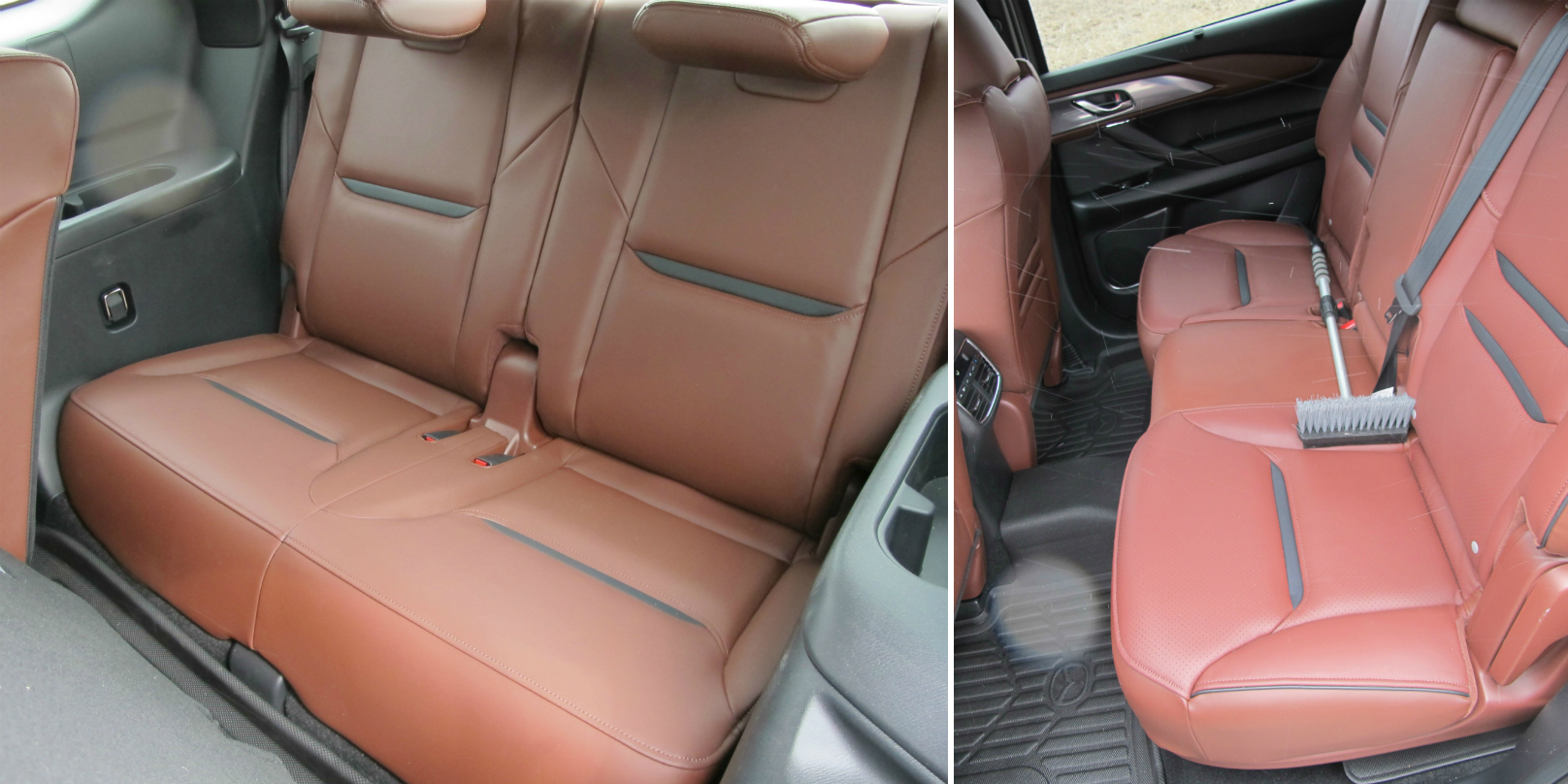 The interior on my tester was done up with a saddle leather hue Nappa leather seating and inserts for a luxury vehicle feel and look which matched the comfortable ride quality.

The great length translates into a long cargo floor. Just to check, I loaded two blue recycling boxes and a green organics bin on its side to see if they would fit, which they did with room to spare.

And the LED headlights really did the job at night. Maybe it’s because the driver’s seat is a little higher, but I had no problems with forward illumination.

I know the front MacPherson strut and rear multi-link suspension was up to Mazda’s Soul of a Sportscar ride and handling standards, but this is not something you push, and I didn’t.

And at the end of the week, I dropped the CX-9 off at Mazda Canadian headquarters and left it parked among the MX-5s and CX-5s and where it fit right in with the current model lineup’s other offerings.

The little MX-5 may be the heart of the brand, but when you need to seat up to seven or load that sheet of plywood, you have the CX-9 ready to fill the bill. 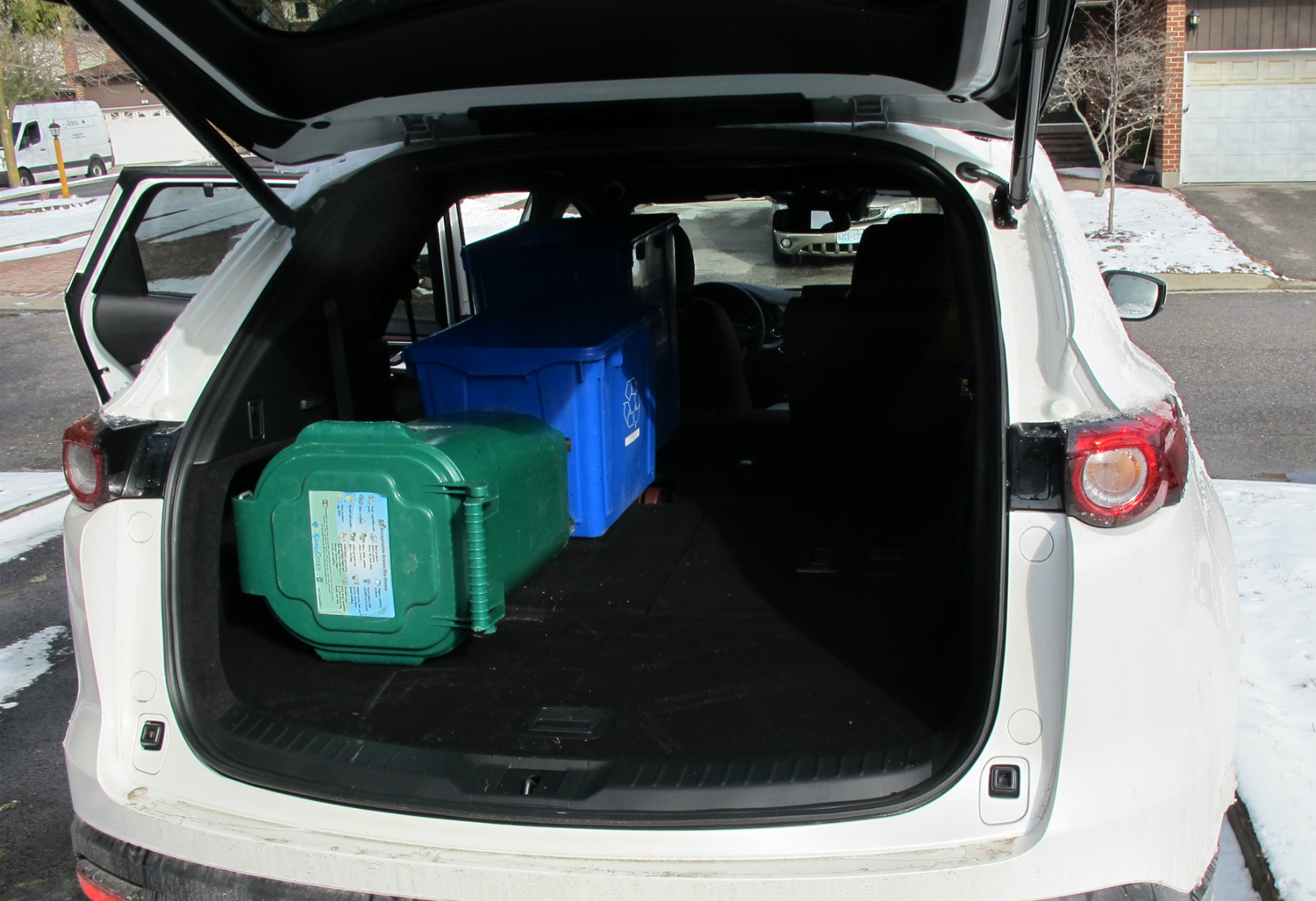