Mazda3 retains the “soul of a sportscar”

Tested here is a 2016 Mazda3 Sport, Sport being Mazda’s term for hatchback — but it doesn’t look like one.

I was once told the Mazda3 model represented one third of all Mazdas sold worldwide.

And while the MX-5 sportscar is grabbing all the headlines and the CX-3 and CX-5 crossovers are selling fast, the Mazda3 remains the top selling Mazda in Canada.

And when it comes to picking up awards, it’s interesting to note the Mazda3 over the years since it was introduced in 2003 as a 2004 model, has become the most honoured car in the history of the AJAC (Automotive Journalists Association of Canada).

The current Mazda3 is the third generation coming to market with a whole new persona.

Firstly, it benefits from the new KODO design language with swooping lines and a grille treatment you can’t confuse with any other brand.

Secondly, all Mazda3s now are Skyactiv engineered with a suite of technologies designed to cut weight and improve fuel efficiency.

Primarily a company of engineers, Mazda has a knack of going at things from a different angle.

For instance, when Ford, Audi and Mercedes-Benz, to name a few, tried to perfect the Wankel rotary engine, it was Mazda that made it work. Mazda is also the only brand to win LeMans outright with a rotary engine for example. 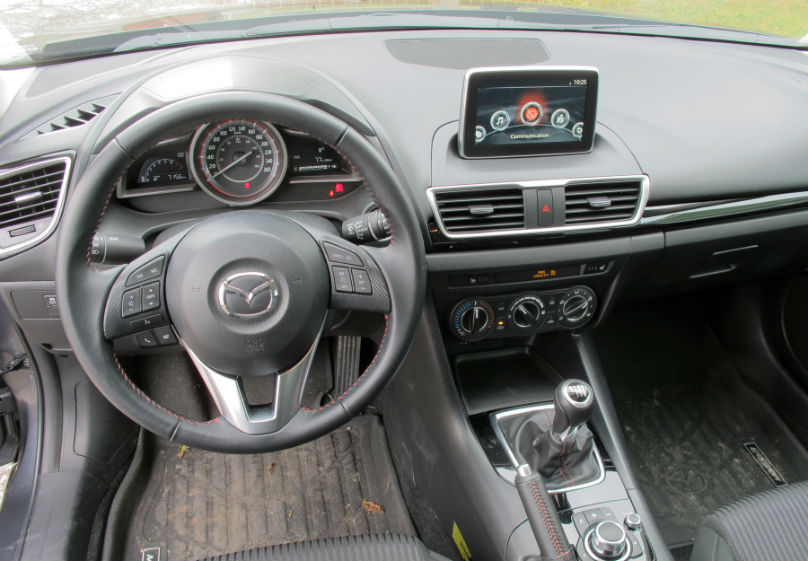 Mazda again has gone it alone in its quest for fuel economy with its Skyactiv gasoline engines.

While the rest of the industry it going to twin turbos and direct injection, Mazda looked at reducing friction, high combustion and valve timing to improve efficiency and it works.

All front-drivers, the GX/GS are equipped with the 2.0-litre version of the Skyactiv DOHC inline four-cylinder with 155 hp and 150 ft/lb of torque.

There is also a 2.5-litre Skyactiv four-cylinder on the GT with 184 hp and 185 ft/lb of torque, but we are dealing with the GS in this review. 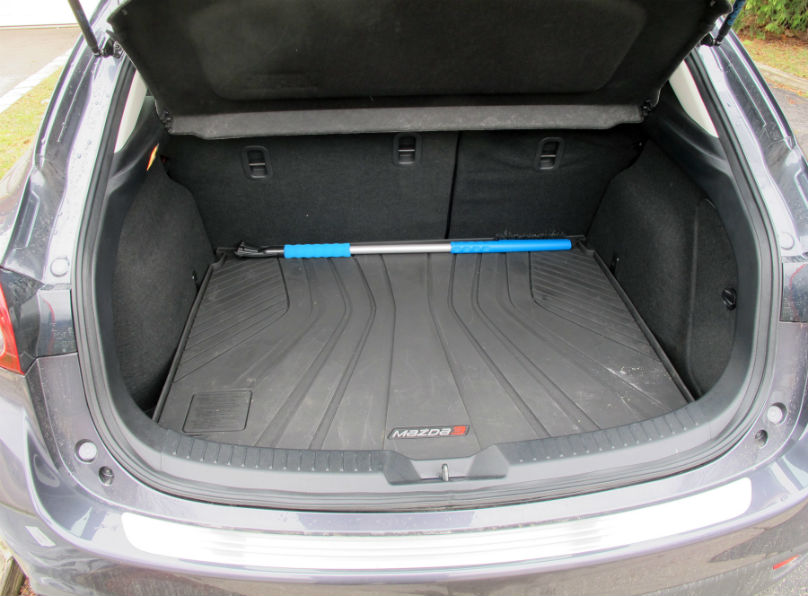 A six-speed manual is standard on all trim levels with the GX and GS having an optional six-speed automatic. The GT also gets a six-speed automatic, but it is enhanced with sequential manual shift, paddle shifters and a “Sport” button which changes gear mapping for more power when needed.

You will note the numbers for the automatic are marginally better than the manual, which is a result of the Skyactiv engineering on the gearbox by cutting weight and friction. 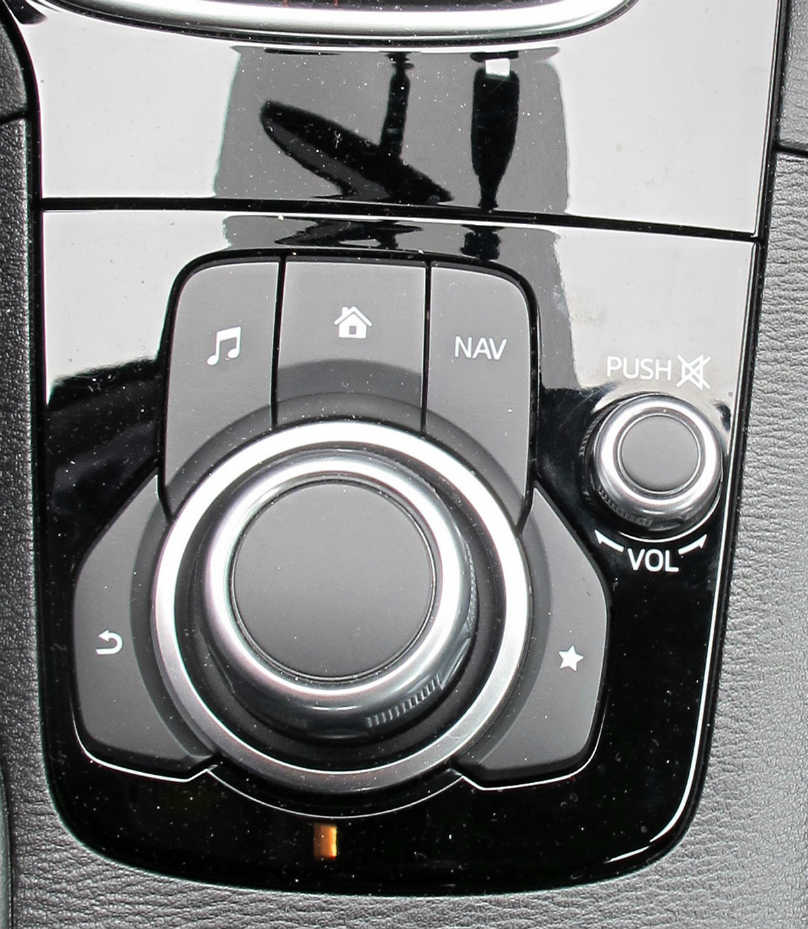 The GT automatic is fitted with i-Eloop, which is a capacitor that stores electric energy and uses it to power secondary systems, such as air conditioning instead of sapping the engine. Its fuel numbers are 8.2/6.0L/100 km.

Tested here is a 2016 Mazda3 Sport, Sport being Mazda’s term for hatchback — but it doesn’t look like one.

With its long nose that arches all the way back to the rear, plus the generous 2,700 mm wheelbase and low roofline, KODO stylists were able to round out the rear giving it an overall coupe-like look.

Open the hood and you find much of the long flowing lines are due to the engine, where the four-into-two-into-one Formula One style exhaust manifold’s inherent straight back architecture means space had to be made between the engine and firewall to give the manifold room. 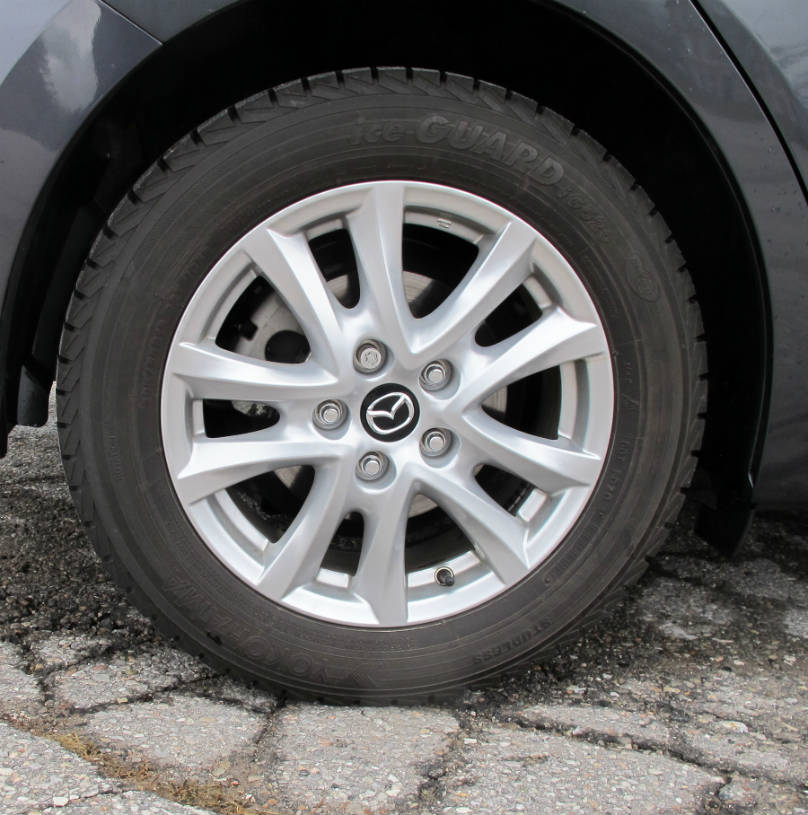 I drove the GS Sport for more than 700 km in a mix of city and highway traffic and by the end; I showed an average of 7.7L/100 km, which is pretty good.

Either way, it shows Skyactiv is for real.

My wife drives a 2010 Mazda3 GS Sport with the pre-Skyactiv 2.5-litre engine, which is faster, but the 2016 felt more relaxed on the highway, but not as easy to point into the corners as the 2010 model. 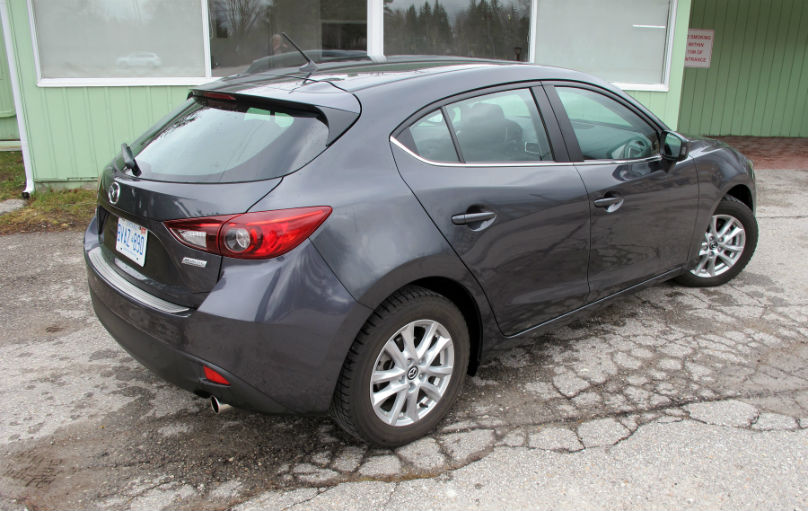 One disadvantage of the KODO styling is the very long downward slopping hood line made it hard for me to judge how close I was the curb when pulling into a parking spot.

One thing I do know about Mazdas is they are tough and reliable mainly because Mazda doesn’t cut corners on the engineering.

The trick for Mazda for the third generation model was to incorporate all these changes noted above, without sacrificing the core of Mazda’s “soul of a sportscar” spirit.

Try one yourself and you’ll see it’s been done.