SEVILLA, SPAIN – Akia Toyoda, CEO and grandson of the founder of the almost-eponymous car company, attended the Pebble Beach Concours in Monterey California in 2011.

He noticed that none of the gorgeous historic cars arrayed on the perfectly manicured lawns were Japanese.

Specifically, none were Toyotas or Lexi (what is the plural of ‘Lexus’?)

So he commissioned a team to develop a new Lexus flagship which, he hoped, some proud owner would some day bring to Pebble.

The LF-LC concept car shown at Detroit in 2012 not only showed how high Toyota can jump when the CEO says “JUMP!” It also showed the direction the production car would take.

The styling struck a chord with many observers (not this one, about which more anon) and Toyoda gave the go-ahead.

His mandate? Brave styling, exhilarating performance from advanced technology, ‘takumi’ craftsmanship (so named after the handful of production experts who will assemble this car in Toyota’s Motomachi plant in Japan) and the quality Lexus has become known for.

Chief engineer Koji Sato was given the keys to the piggy bank. He told me at the global launch of the car that ‘LC’ stood for ‘Lexus Challenge’— how to stuff a real engine and real people into the design concept’s low-slung shape.

“It seemed impossible, but Akio said, ‘That’s why we should try it!’ ” said Sato.

“We (engineers) worked very hard collaborating with the designers to solve the problems one by one,” he continued, “and now here we have the LC!”

In its 25-year history, Lexus models have been derivative at best — dead-nuts knock-offs of Mercedes-Benzes — or in the case of the first GS, a Giugiaro design which Jaguar had rejected.

But there was never anything that screamed ‘Lexus’ to anyone who couldn’t see the badges.

No worries with the LC.

Some people think this is the most beautiful car they have ever seen.

To be polite — aren’t I always? — let’s just say I don’t share this enthusiasm. I don’t see a single line, front, side or rear, which makes any sense whatsoever.

Eye of the holder and all that.

But boring? Gotta give them credit there — boring this ain’t.

The massive ‘spindle’ grille has become as close to a Lexus design cue as there is. It leads to a low body with creases and curves everywhere, ending in bladelike tail lights.

To my eyes, the interior is more successful. Lexus calls the cabin a ‘two-plus-two.’ More like ‘two-plus-two-halves,’ because no one but a Cirque du Soleil performer is going to get in the back, let alone be comfortable for any distance longer that, say, a metre.

Still, a padded grocery bag shelf is more than the Mercedes-Benz SL offers. 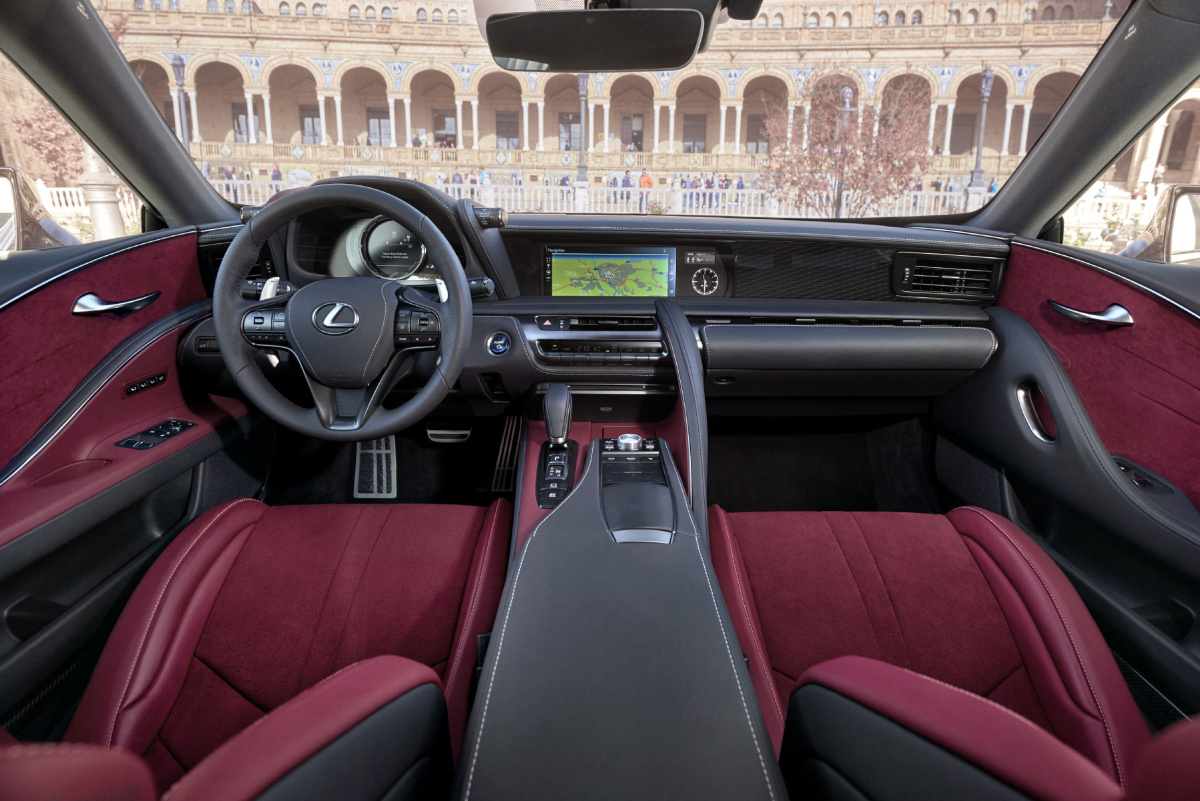 The sweeping curve of the dash blends in to the door trim panels which feature a beautiful wave pattern moulded into the Alcantara fabric. Much of the interior is also hand-stitched, a la Bentley or Rolls-Royce.

Virtually no ‘parts-bin’ bits here; every piece is LC-specific. Most of it looks terrific, although the flat transparent pane (glass or plastic? Hard to say …) across the centre of the dash looks a bit prosaic, and the graphics on the various electronic display panels don’t look as rich as some of the competition.

You can choose ‘Drive Mode’ (Eco, Comfort, Sport and Sport+), selecting engine, suspension and ESC parameters to suit, plus ‘Individual’ which allows you to tailor the various settings to your personal preferences.

The knob to do this is on the right side of the instrument panel; with its mirror image on the left side controlling the ESC system, they reminded my co-driver Gabriel Gelinas of the bolts in Dr. Frankenstein’s monster’s neck …

My two test mounts both had the up-level sports seats, which proved very comfortable and had sufficient lateral support for the type of driving anyone is likely to do in this car, i.e., not race-car snug, but not difficult to get in or out of, either.

They are bolted, welded and glued together for excellent rigidity, although at from 1,935-to-2,020 kilograms, depending on the model, it’s far from being a lightweight.

Only rear-wheel drive is offered on the LC at the moment, although the architecture is four-wheel drive compatible, as it will underpin the next-gen LS sedan which will debut in Detroit in January, and other Lexus products in coming years.

The front suspension has dual top and lower links, arranged in double wishbone fashion. The multi-link rear suspension has a soupcon of rear-wheel steering. There are no ‘kingpins’ as such around which the hubs can pivot, but an electrically driven actuator can nudge the hubs against their bushings up to about three degrees of rotation, in counter-phase to the fronts for more agile low-speed manoeuvres, or in-phase for more stable high-speed lane changes.

Two powertrains will be offered. The LC 500 has essentially the same 5.0-litre V8 as the RC F and GS F. With modified heads and other tweaks, it produces 471 horsepower in the LC. You may see 477 horsepower mentioned in other outlets. That’s the number on the global spec sheet, but that’s on 95 octane fuel, which you can’t get in Canada unless you have the keys to an airplane fuel station.

The V8 is bolted to a new 10-speed automatic transmission.

The LC 500h uses a new hybrid system consisting of the familiar 3.5-litre V6 producing 299 horses, connected to a motor-generator which adds another 179 ponies.

A conventional hybrid transmission and a so-called ‘multi-stage shift device,’ a rather fancy name for a four-speed automatic gearbox, together can actually can provide a wide range of what are effectively ‘gear ratios,’ but Lexus has limited the number to 10, to be similar to the gasoline version.

These ratios can be selected by shift paddles and an ‘M’ (for Manual) mode has been added to the hybrid system, using what Lexus calls an ‘improved’ version of the ‘AI’ shift controller. Once you knock this thing into Neutral, either on purpose looking for Manual or by mistake, there’s no easy way to get it back into Drive. You have to shove the shift knob down, over, who knows which way. Unacceptably complicated.

The LC 500h is not a plug-in hybrid, so you only get whatever electric power the car gains from regeneration on deceleration. It can reach 140 kilometres per hour in pure electric mode, but not for long — total pure electric range is only a few kilometres.

Our test began with the LC 500h hybrid. The very first impression pulling away from the hotel parking lot is one of solidness, the proverbial ‘carved from a block of granite’ sensation.

Ride quality is generally very good; the occasional harshness over sharper ridges can probably be put down to the run-flat tires. The steering feels accurate and nicely weighted.

At elevated revs in either Sport or Sport+ driving modes, the exhaust system opens up. Maybe it shouldn’t; the engine note becomes a very unpleasant keening wail above about five grand. Perhaps it’s a way to ensure hybrid buyers who presumably will be more economy-conscious won’t explore these upper rev ranges.

Lexus says the LC is really more of a ‘Grand Tourer’ than a track-oriented sports car. They are correct. Still, it gave a decent account of itself on the Monteblanco circuit, 60 km west of Sevilla, despite damp track conditions caused by rain in Spain, which did not stay on the plain.

Throttle response was better, power delivery felt more linear, and it was much easier to know what the conventional automatic transmission was doing.

Also Read: The 2017 BMW 650i xDrive Cabriolet, It’s all about luxury and power

The open exhaust in Sport and Sport+ sounded much better, too. Just can’t beat that V8 burble.

Turn-in in both models was good, and cornering speeds suitably high.

You can, however, feel the considerable weight of the car working against itself. ‘Nimble’ isn’t a word that springs to mind.

The brakes feel strong; on one occasion where I may have left the braking a bit late and I had to really nail the pedal, it worked just fine.

Our run back home from the track was in the LC 500. Our track reaction was confirmed — if performance is what you’re after, this is the one you want.

The V8’s transmission ratios have been calibrated so the car ‘sings’ in harmony as you run up through the gears. On full throttle, each gear is held for about the same length of time before the upshift, and the tonal range of the engine frequencies stays the same in each gear.

Automatic shifting is decently quick. Lexus claims it’s as fast as a dual-clutch transmission, but if you click down two or three ratios via the shift paddles, it clearly is not. There was the occasional bumble on downshifts when the right foot called for a drop of several ratios at once.

Overall, the LC 500 and 500h are excellent automobiles, with a few easily correctable flaws.

Lexus Canada isn’t really setting sales goals, but I heard the number 200 being tossed around. I have no doubt they will reach that target.

Will there be an LC at Pebble Beach in 2026? If the people who can afford this kind of car disagree with me on the styling, it has a shot. 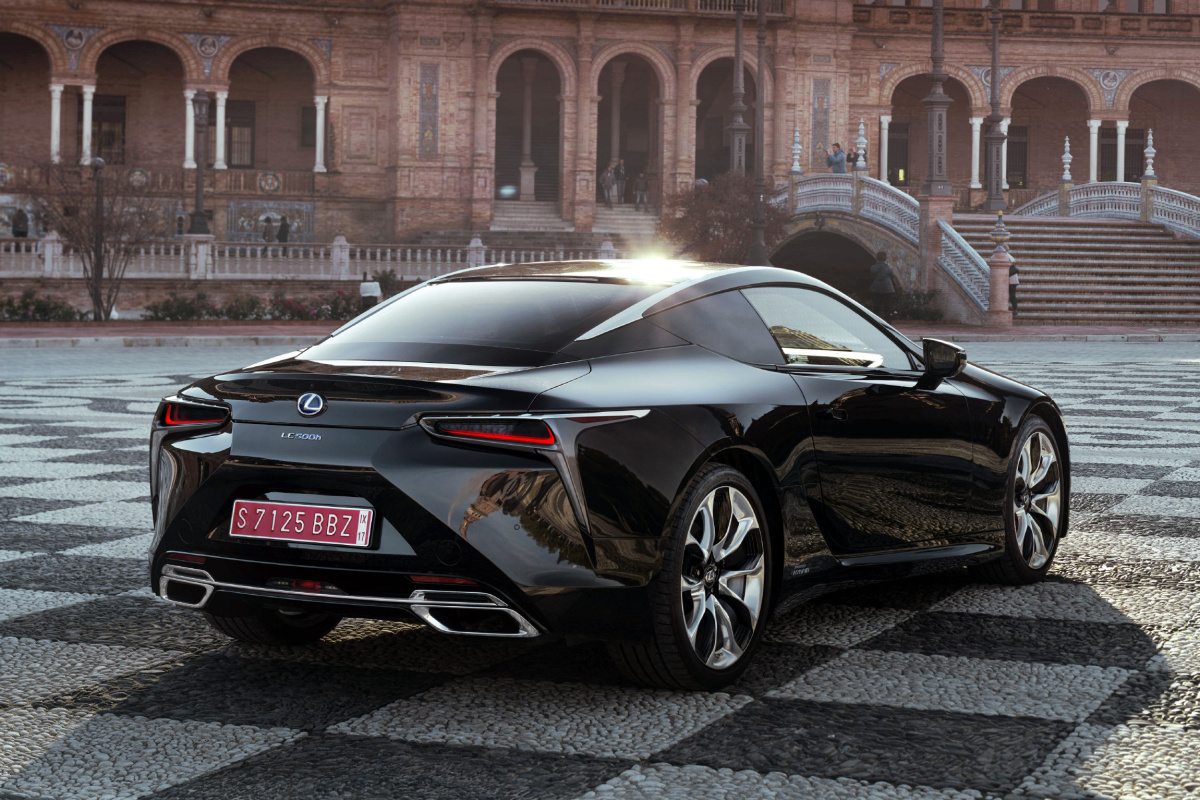