Is a vehicle with zero emissions in your future?

Forward-thinking companies such as Hyundai and Hydrogenics are poised to provide creative solutions to many problems while reducing the reliance and consumption of energy generated by fossil fuels.

One can only imagine the reaction from Joe Cargnelli, Chief Technology Officer (CTO) of Mississauga-based Hydrogenics Corporation when he took delivery of his 2015 Hyundai Tucson Fuel Cell Electric Vehicle (FCEV) and walked into his local ServiceOntario office to be told that his hydrogen fueled utility vehicle did not qualify in Ontario as an eco-friendly vehicle. His one-of-a-kind Hyundai in Ontario did not, at this time, in the eyes of the provincial government, qualify as a recognized green mode of transportation – in spite of the growing opinion that as an alternative fuel source for automobiles, hydrogen-power is indeed considered a viable solution.

Ironically, Hyundai was the only automotive brand in Canada to deliver zero-emissions back in 2015. Technically, if there actually are any emissions from a hydrogen fueled vehicle, it is water. Joe was denied green plates – even though fuel cell technology has the potential to revolutionize the world as we know it – by delivering clean energy to meet almost any demand.

At present in Canada, the only other province where a very limited number of selected individuals (six) lease and drive the Tucson FCEV, is British Columbia – and there are no issues or discussion on the “status” of this vehicle. 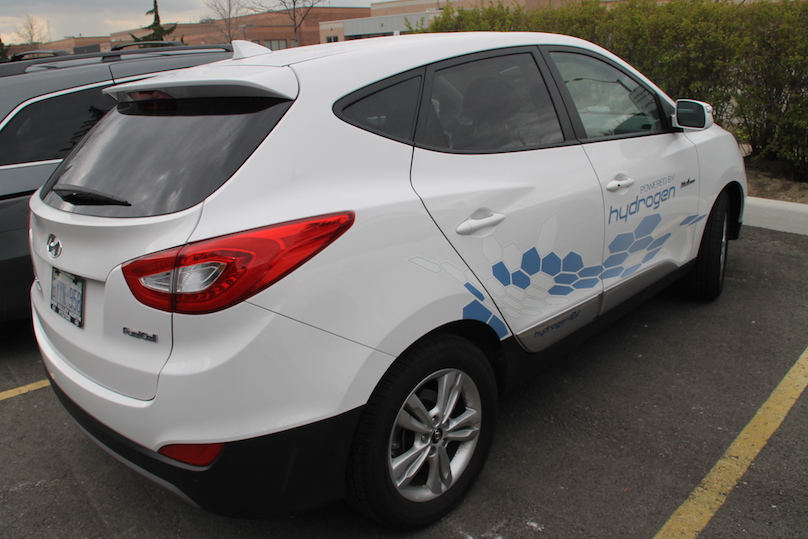 Distribution of this innovative automobile has been deliberately low key and every one of the 534 units of Tucson FCEV sold globally to date has been leased for a 36-month term, with 100 units attributed to California. There is no buy out and all prospective lessees had to live within driving range of a hydrogen refueling facility. At the end of every lease, Hyundai retains ownership of all vehicles and will study them exhaustively to ascertain real-world driving data – all to benefit future adopters of FCEV’s.

So if the process to “own” a Tucson FCEV is so stringent, how did the CTO of Hydrogenics Corporation qualify?

Hydrogenics Corporation is a recognized world leader in engineering and building the technologies required to enable the acceleration of a global power shift. The fact that they build hydrogen fuel cells and generate hydrogen as a fuel at their Mississauga world headquarters made the decision that much simpler. Joe would be able to refuel his vehicle as required each time he was at his office.

The obvious lack of infrastructure (hydrogen fueling stations) is an evident drawback. In a far-reaching interview, anecdotally we were advised that currently this FCEV has a range of about 500 kilometres – better than the available majority of battery electric vehicles (BEVs) – and an improvement over Hyundai’s own estimates. It should be noted that colder temperatures do not degrade the performance of a hydrogen powered vehicle. Furthermore, the Tesla P90D has an Environmental Protection Agency (EPA) range of 434 kilometres and the yet to be released phenomenon known as the Tesla Model 3 has an estimated range of 345 kilometres. Tesla announced they anticipate shipping towards the end of 2017.

To most people, other than some unique badging, a Tucson FCEV resembles a regular internal combustion-engine Tucson – especially the exterior. It’s only once the hood is lifted that differences may seem noticeable – to some, not all. Imagine a vehicle that will never, mechanically require an oil change, which will never experience a dealer-suggested so-called conventional Level 1, 2 or even 3 service. They are just not required since there is no engine in the conventional understanding of how an automobile is propelled. 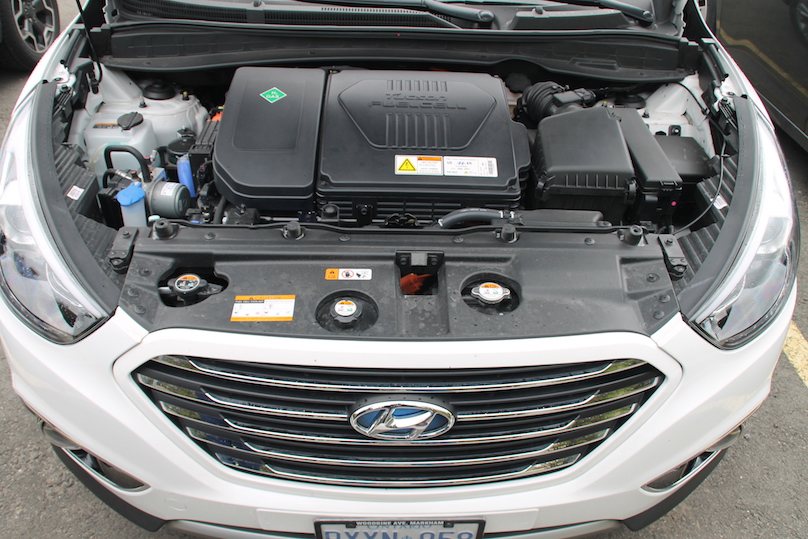 The biggest difference from a cargo volume perspective is in the rear of the Tucson itself. A total of 675 litres of space is available where on a regular 2016 Tucson it is 877 litres. Open the rear lift gate and you will see an overall “platform”, less than two inches in height. Lift that and there is the insulated, protected with plastic “fuel” tank which has a capacity of 5.63 kilograms or approximately 140 litres of hydrogen gas. 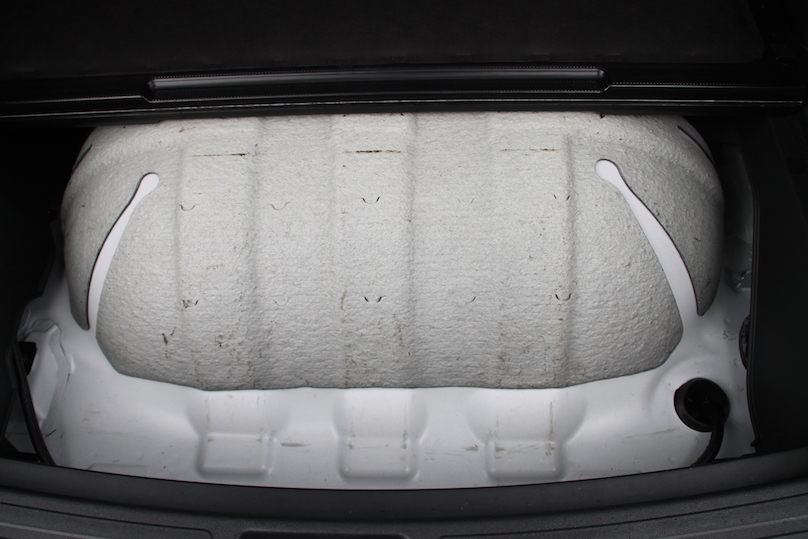 Otherwise, this vehicle drives like an electric vehicle – except that it has much better range and, when and where available, has the ability to refuel in minutes as opposed to hours like most conventional EVs. And that is where we have this anomalous dichotomy. Hydrogen is the most abundant element in our known universe – and it also burns clean. Remember, the only thing that comes from an FCEV vehicle’s tailpipe is water – H2O. A 100kW electric motor handles the forward and reverse modes. While the motor itself only produces 134 horsepower, it also generates 221 lb-ft of torque. As an urban auto, used around town, driving to and from work, running errands, taking the kids to after school activities it will excel – again, you may be unaware you are driving an FCEV – except for the noise – or, strictly speaking, the lack thereof. It’s quiet – as an EV would be. This iteration of the Tucson would not do very well on a drive through the Canadian Rockies or on the magnificent Sea-to-Sky Highway (Highway 99) on the British Columbia coast. On relatively level roads it’s more than fine. On those roads with long, uphill climbs, that is a different matter, entirely.

To be clear, there isn’t , nor should there be any stigma attached to the idea of a hydrogen powered vehicle. The technology while still evolving, is solid. There is no danger in how hydrogen gas is stored. In simple terms, there is no combustion of hydrogen and the fuel cell stack has no moving parts – in layperson terms, no danger of a Hindenburg reaction. None. The electrochemical process of combining oxygen and hydrogen in the fuel stack creates electricity to actually power the Tucson’s electric motor while providing a charge to an onboard battery. 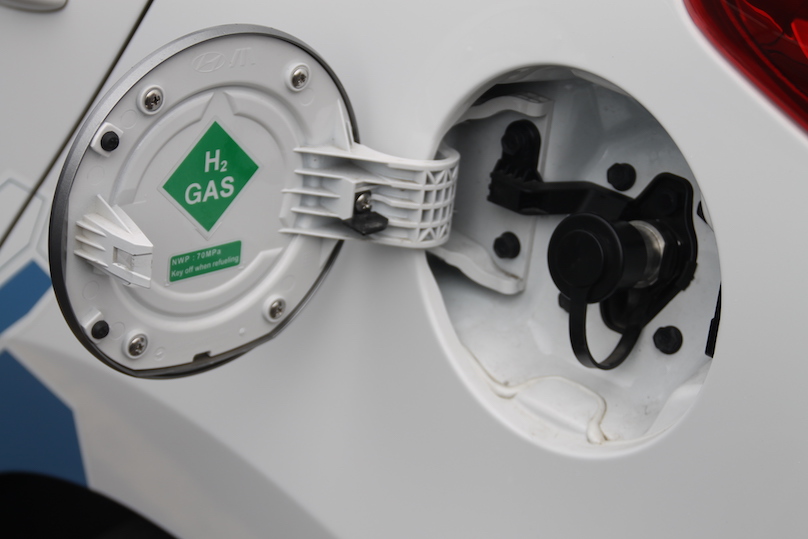 While Hyundai made its initial foray into the world of alternate fuel, Hydrogenics began to emerge. Cargnelli is one of the three founders and with a background in engineering research, applied science and mechanical engineering he as well as a strong management team have built this international corporation into a world leader in their field. Currently, more than 99% of their business is conducted outside of Canada – yet they still call Mississauga home. When Hyundai first announced to a waiting world that hydrogen-powered vehicles were indeed a realty, Hydrogenics jumped upon the opportunity to be a part of that world. With their advanced work harnessing the potential of hydrogen power, there are now an infinite number of opportunities including industrial applications such as lift trucks, the aerospace industry, and mass transit including fuel cells in buses, boats, motorcycles and bicycles, among other kinds of vehicles. Fuel cells are also being used to provide auxiliary power for aircraft, replacing fossil fuel generators that were previously used to start the engines and power critical on-board electrical needs. Engineers are even augmenting solar and wind power installations in an efficient and cost-effective manner.

Hydrogen as an alternative fuel source is not a new idea. However, forward-thinking companies such as Hyundai and Hydrogenics are poised to provide creative solutions to many problems while reducing the reliance and consumption of energy generated by fossil fuels.

For there to be greater penetration and adoption of fuel cell technology in today’s automobiles, all levels of government would have to develop an appetite to build the necessary infrastructure (hydrogen fuel stations) across the provinces, eventually linking them across the country.

Over the years, many of the world’s major manufacturers have developed but never mass-produced nor marketed FCEV automobiles. Today, Toyota with the Mirai, introduced in 2015 and Honda’s Clarity, to be released in 2016 as well as Hyundai, of course, are the only major manufacturers with hydrogen-powered vehicles in production.

For the record, Hyundai Canada has applied on behalf of Joe Cargnelli for green plates. At this time, the matter has yet to be resolved. 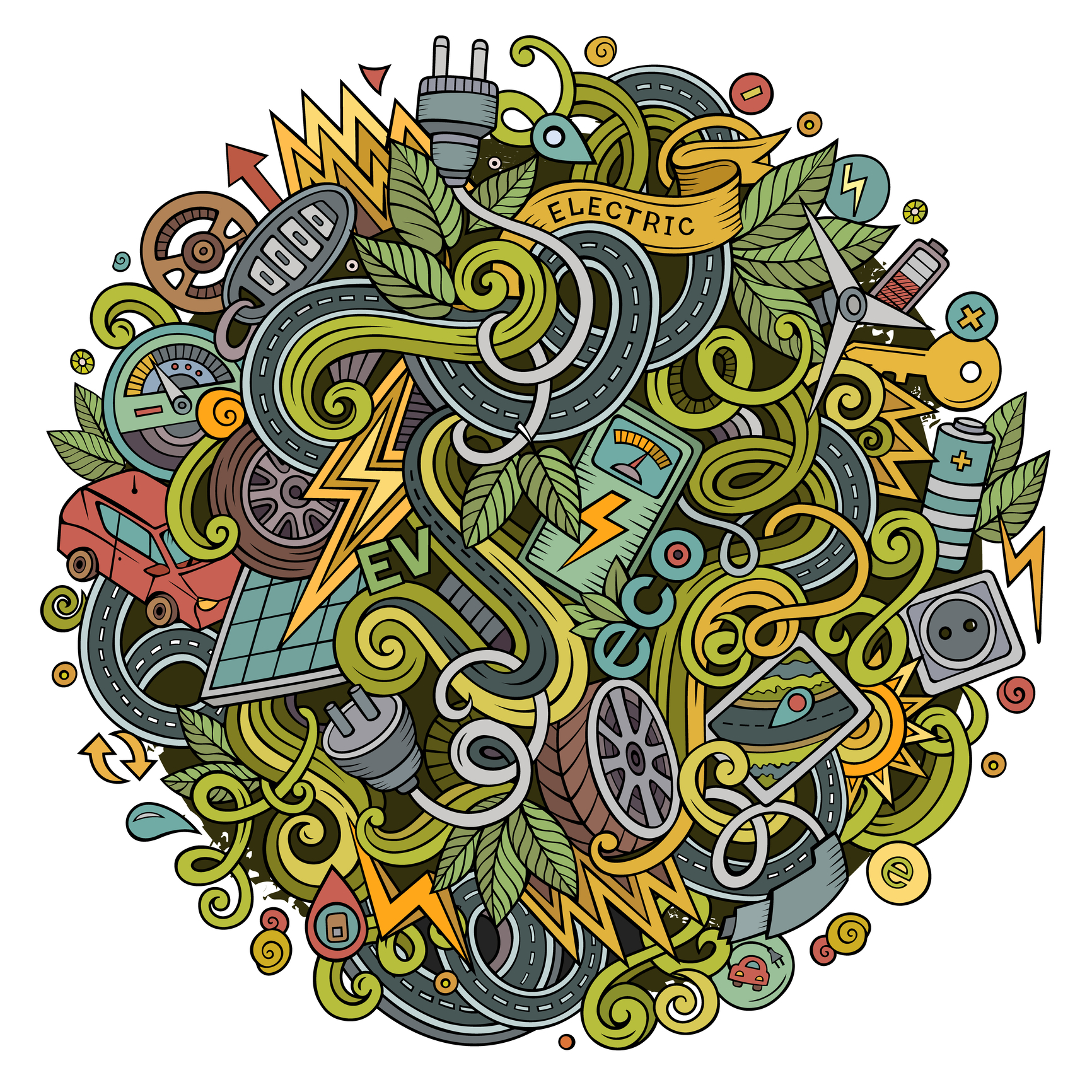