This is an incredibly dynamic car to drive because of its near-perfect 50/50 weight distribution. The 5-link rear suspension does a fantastic job of keeping it planted on the road even when doing hard cornering.

Lacey Elliott: This 2016 refreshed ATS makes my heart pound just on its looks alone. The design is edgy and incredibly unique no matter what angle you are looking at it. The front light treatment is like nothing else on the road; there is no question in your mind when you see this new Cadillac approaching you in your rear view mirror.

This car shares the same platform as the sedan but the roof, doors, trunk lid and rear fenders are all distinctive for the coupe.

The interior is nothing short of luxurious. The materials used are lavish and incredibly well put together. Real wood, carbon fiber and aluminum all work together to create an interior that provides a high level of refinement. It’s evident that the design team that put this car together spent a lot of time ensuring that even the smallest detail had been looked at.

My favorite design aspect is the center stack that almost seems to float. It flows into the dash and creates a finished appearance that is completely seamless to look at. 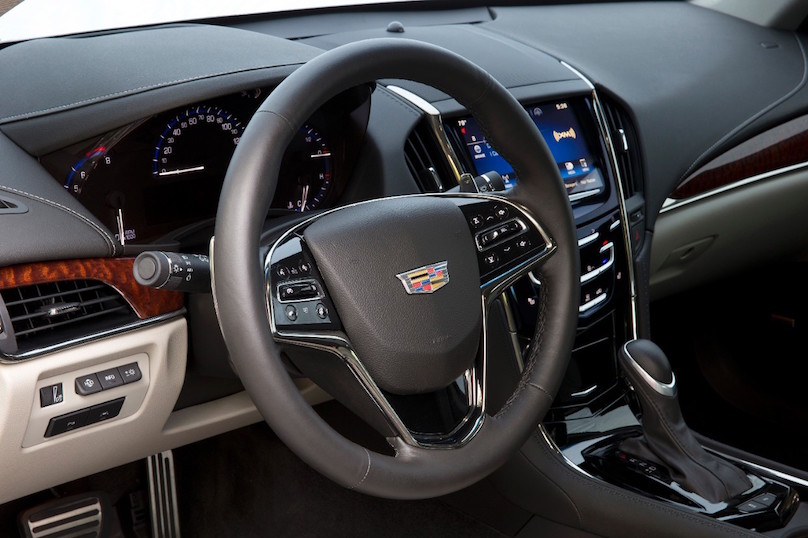 The interior has a generous amount of space and a good-sized trunk but the rear seat is a bit limited for 4 adults. If hauling grown-ups is something that you do frequently; the sedan would be a more sensible choice.

The BMW 4 Series is the major competition for this car. The unique look of the Cadillac wins my vote. However, the 4 Series does have a bit more interior volume in both the trunk and the passenger area.

Dan Heyman: While it equals its sedan sibling with regard to both its wheelbase and overall length, the ATS Coupe gets a wider rear track and lower roof, making it appear much more planted and athletic, even while at rest. To further push that image, the trunk-mounted taillight has been moved lower down. So it looks lower at night, too. The awesome fender flares and dual exhaust pipes work like a charm, too. 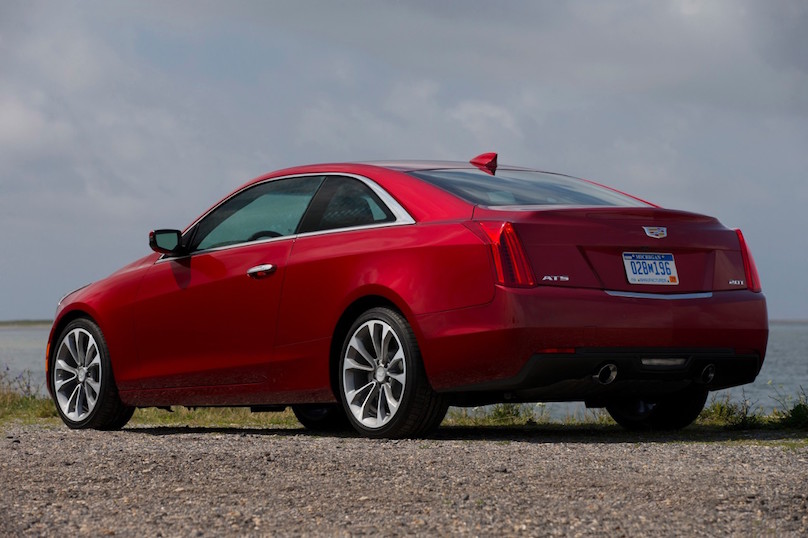 What I found strange, however, is how similar the Coupe looks in profile to the sedan; the chopped roof doesn’t appear as such from this angle and since you can’t see the fender flares, it’s a little less aggressive looking. I’d say the BMW 4 Series has it beat on the styling front from this angle.

I have to agree with Lacey’s interior assessment, though; it is, for the most part, fantastic. My favorite aspect is that if you see a panel that looks like it’s crafted from wood or aluminum, then it is. When the ATS was being developed, Cadillac was intent on returning its interiors to where they once were after a decade or so of slipping interior quality. Now, the wood, the suede, and the leather all look – and act – the part.

if you see a panel that looks like it’s crafted from wood or aluminum, then it is.

I guess if I had to take issue with anything, it’s that you can’t mix and match your interior colour combinations; there are presets of materials and colours used, so if one of these doesn’t suite your fancy, well, that’s just how it is. Then again, Cadillac has clearly done its research, as the colour combos that are available are all well carried out, with subdued blacks and greys, as well as more adventurous reds and browns. 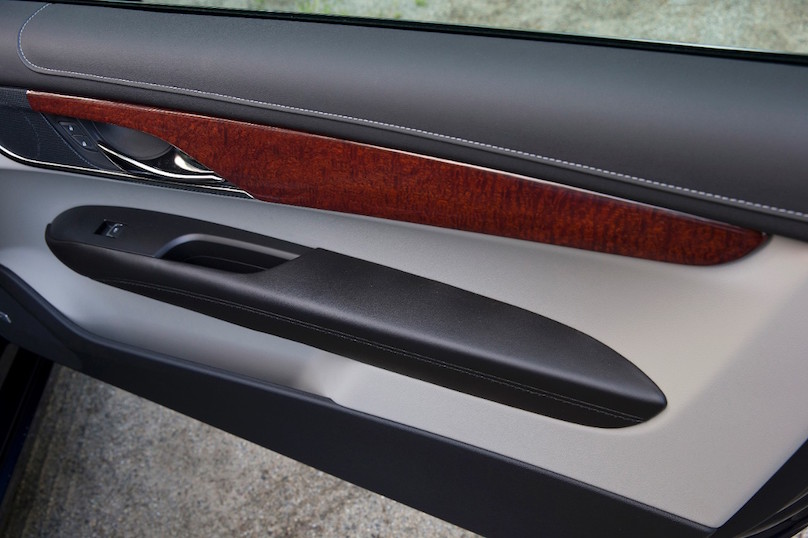 This is an incredibly dynamic car to drive because of its near-perfect 50/50 weight distribution. The 5-link rear suspension does a fantastic job of keeping it planted on the road even when doing hard cornering. Driving on wet roads I feel confident. The steering is dialed in and responsive.

Cadillac has introduced start/ stop technology and an 8-speed transmission that both help to improve fuel consumption. The smooth shifting transmission can also be shifted manually.

Over the years, BMW has proved itself with the very popular 3 Series. On the road; it’s a close call between these 2 cars. Both have comfortable suspensions and similar cornering abilities.

This is an incredibly dynamic car to drive because of its near-perfect 50/50 weight distribution.

DH: I can’t believe I’m saying this, but Cadillac may just have BMW beat on the driving dynamics front this time ‘round. High praise? It is, but well-deserved, too.

It makes 272 horsepower and 295 lb-ft of torque, which are good power figures but the four is a double-whammy in the sense that it’s lighter than the V6, too, meaning you don’t upset the handling balance quite so much. 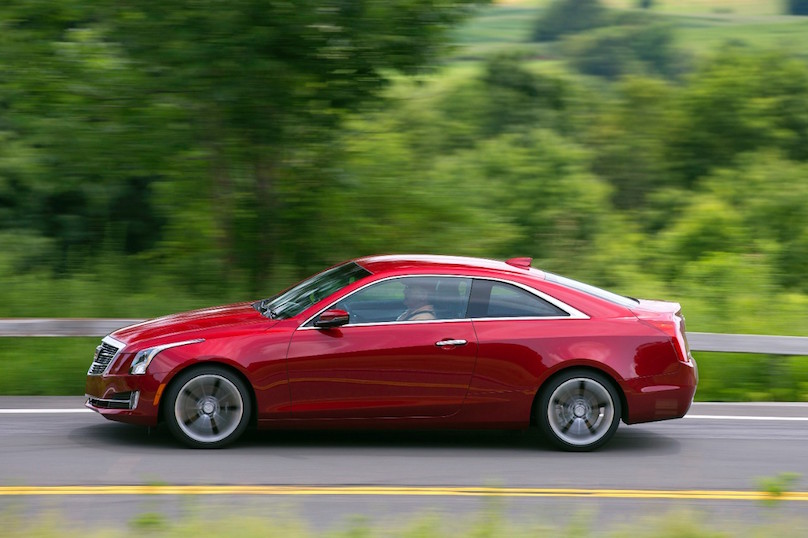 You really wouldn’t want to, either, as the ATS is very good in this department. I always say that steering feel is paramount when it comes to driving as it provides the most tangible connection between driver, car and road. Cadillac seems to have taken this to heart, as the ATS exhibits a steering feel that actually leans closer to the wonderful hydraulic set-ups employed by Bimmers of old than do new BMWs. The ATS’ is not a hydraulic set-up, but Cadillac has managed to massage in some great steering feel nonetheless.

The feel is matched by chassis response, the ATS switching directions quickly and with gumption, especially if you’ve selected the magnetic adaptive dampers that automatically adjust to what’s going on below the car. If you want those dampers on your BMW 4 Series, you have to go all the way up to the hi-po M4 trim to get them. Even then, they remain an option on top of the $76,000 base MSRP.

If I have one complaint – and it’s not really a complaint – it’s that you really need to opt for the manual transmission if you plan on getting the most out of the turbo’s powerband. The automatic’s OK, but better-suited to the V6. Trouble is, you can’t have AWD with the manual, which will push some people away who may have originally been considering the stick. The V6 is quite sonorous, though; indeed, turbo motors often lack the character that naturally-aspirated poweplants do, and the V6’s muscle car-lite report is a sound for sore ears.

LE: All speed traction control is standard across the board. Forward Collision Alert, Lane Change Alert and Lane Departure Warning are not available on the base model. They are an option on the Luxury Trim and are standard features on the Performance and Premium.

Don’t forget the CUE System also known as the Cadillac User Experience. It comes to life when it senses your hand is close or by using voice recognition. It also lets you access your music and contacts with just a touch or flick of the screen. Apple CarPlay and Android Auto are available for 2016 and they seamlessly connect through CUE. 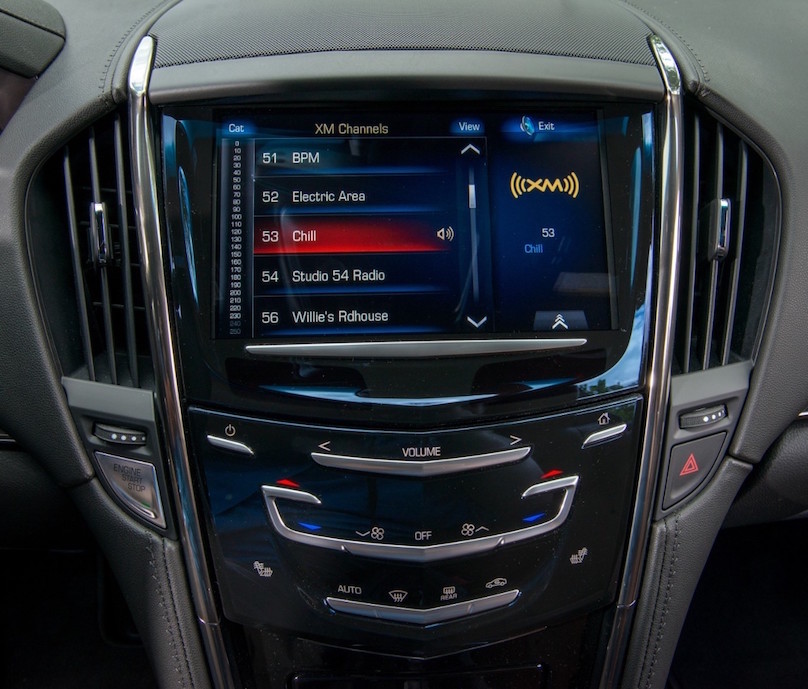 BMW has iDrive that shares many of the same functions but it feels out of date compared to CUE.

DH: Lacey was being nice regarding CUE; I won’t be. Not as much, anyway. Yes, the graphics are nice and there are those that just loooooove touchscreens and touch surfaces in any way, shape or form. I, however, am not one of those people and am a big proponent of some redundant controls here and there. A volume knob, perhaps, or a fan speed adjustment dial. Why? Because they’re just easier to operate without having to take your eyes off the road. iDrive out-of-date? Somewhat, I guess, but I’d take it over CUE any day of the week.

I do, however, have to compliment Cadillac in how they integrate their electronic safety aids. Namely, their lane-departure warning system. Instead of beeping at you so the whole cabin can hear, the side of your seat subtly vibrates, depending on which direction you wander. Both sides vibrate if you get to close to an object while backing in.

LE: The ATS starts at close to $36,000 for the base 2.5L 4-cylinder, $38,000 for the 2.0L turbo and $45,000 for the new 3.6L V6. There are a lot of good reasons that this car won the North American Car of the year just 3 years ago. With a refresh and some changes, that great car got even better. The ATS has more unique styling, the interior is more up to date and it’s a gem on the roads. It really is a close call with the 4 Series but the ATS gets my vote overall.

RELATED: XT5 is crucial to Cadillac

DH: The drive quality and power delivery of the ATS makes it hard to believe that there’s actually an even faster, performance-oriented version (it’s called the ATS-V) of Caddy’s sprightly coupe, which is another testament to just how good it is. Cadillac set out to go head-to-head with the Germans with the release of both the ATS Coupe and its sedan variant, and they’ve gone further than any domestic manufacturer has before, equaling – and even surpassing – the competition in many departments. Job well done.