Lacey and Dan drive the 2015 Jeep Wrangler Unlimited in this weeks He said/She said.

Lacey Elliott: What more is there to say about the exterior styling of a Jeep that has not already been said? The slatted front grille and round headlights are still very similar to the first war jeeps from 1941. The boxy frame and exposed screws and hinges make it one of the most recognizable vehicles on the road. All Wrangler models come in 2-door or the Unlimited with 4 doors. 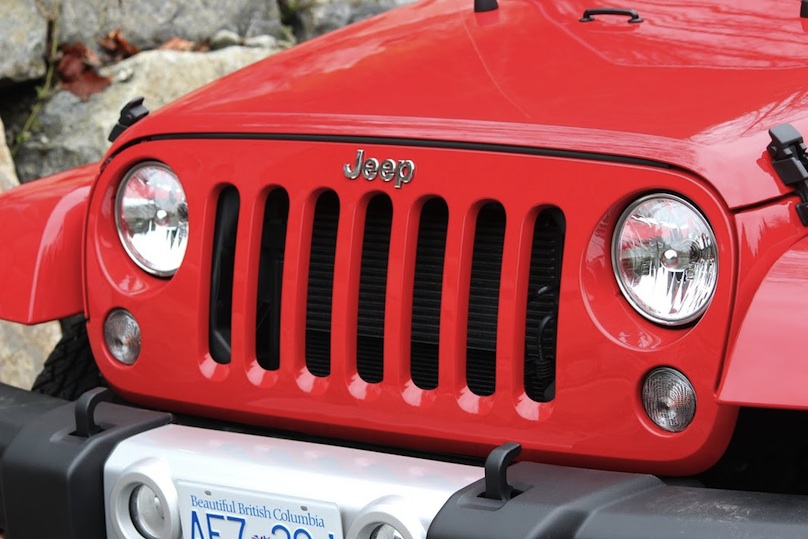 Dan Heyman: Honestly, you aren’t really buying a Wrangler for its styling, are you? I doubt I would be. Nevertheless, the boxy, modular shape means that there’s a host of upgrades that can be made straight from the dealer, from roof-mounted spotlights to winch kits; it doesn’t take much to turn your Wrangler into the zombie apocalypse chariot you’ve always dreamed of.

In that light, the 2015 Jeep Wrangler Unlinmited Sahara you see here is actually a little tame in comparison, one of the more subdued—if you can call it that—Jeep styling exercises you’ll see. Which, of course, could be exactly what you’re looking for and helps highlight the traditional Jeep styling elements that Lacey mentions.

LE: The side step makes it easy to climb inside, even if wearing high heels. The interior of the Wrangler has never been known to be luxurious, but improvements have definitely been made over the years. The layout is modest and rugged in appearance. The dash is composed of hard plastic, which is easy to clean. All of the knobs, buttons and dials are large and simple making it easy to access music or use the climate controls even with gloves on.

The Freedom Top hardtop takes a bit of elbow grease and time to put on and off. The first time I did it, it took some time to figure out. By the second time, though I was pretty confident. It started to rain on my way home one day and it’s definitely not as convenient as a push button on a convertible sedan. It took me less than 5 minutes to pull over, take the panels out of the back and snap them back into place. The extra bit of work is totally worth the feeling of open air while you drive.

All the seats are quite firm and the bottom cushion on the front seats are a bit short for my legs. The high seating position makes it easy to see out and is helpful to see any treacherous road ahead. Thanks to the boxy shape and high roofline there is plenty of room for even the tallest of passengers.

With the seats folded flat this little Jeep has a lot of space. Because of the squared off corners, every inch is useable. 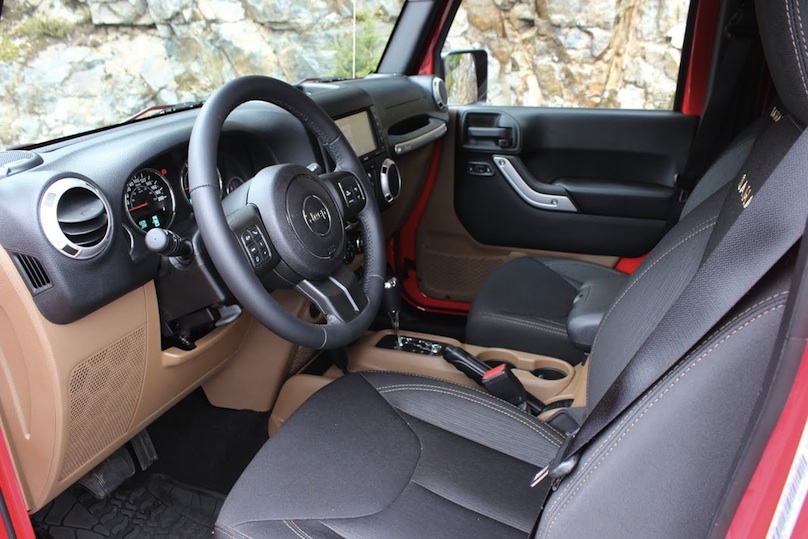 DH: Ahhh, the Freedom Top. If ever there was a more misleading name in the sport utility world, I haven’t seen nor heard of it. Lacey was being nice, I won’t be: it’s a pain in the behind, there’s no two ways to say it. Yes, there are “Jeep people” out there that have rigged their garages with a pulley system to better handle the top—seriously, I’ve seen this–but that is a select few of the many buyers the Wrangler has. Please, Jeep; when the new truck comes, let’s do something about that top, eh? Maybe add a telescoping steering wheel while you’re at it? I’ve got long legs and short arms, and the wheel was a bit more of a reach than I’d like.

Otherwise, the interior is as functional as the exterior styling suggests it would be. The sightlines are clear with all the controls accessible and within reach—except for the mirror controls, whose position at the base of the entre stack means you have to look away from your mirror to find the adjustment.

While the rear seats—even in this, the four-door Unlimited model—are a little cramped, I am a fan of how the seatbacks easily fold forward accompanied by the headrests folding back, for a nice, flat load floor.

Really, though—very little beats sitting nice and high in your Wrangler and looking out over the square hood with its rubber stops (so you don’t crack the windscreen when you open it) and tool hooks. You feel on top of the world, you really do.

LE: All Wranglers are powered by the award winning 3.6L Pentastar V6 engine and you can choose between a 5-speed automatic or 6-speed manual. Power is plentiful in this Wrangler. It seems to be a bit slow when taking off from a stop but once going, passing other vehicles is no issue.

The 4WD system is capable and reliable and is content in all seasons this country has to throw at it. The tires have a lot of grip and the steering is easy. Ride quality is still not the most pleasant feeling; its firm and you can really feel the road surface underneath your tires.

Even on the hard top, the lack of insulation makes conversations between passengers difficult. It doesn’t add any enjoyment to the drive, but I think if I was loaded up with friends to go camping or surfing we would be more excited about the final destination than the car ride. The great thing with the Wrangler is that it can take you places most quiet sedans can’t. 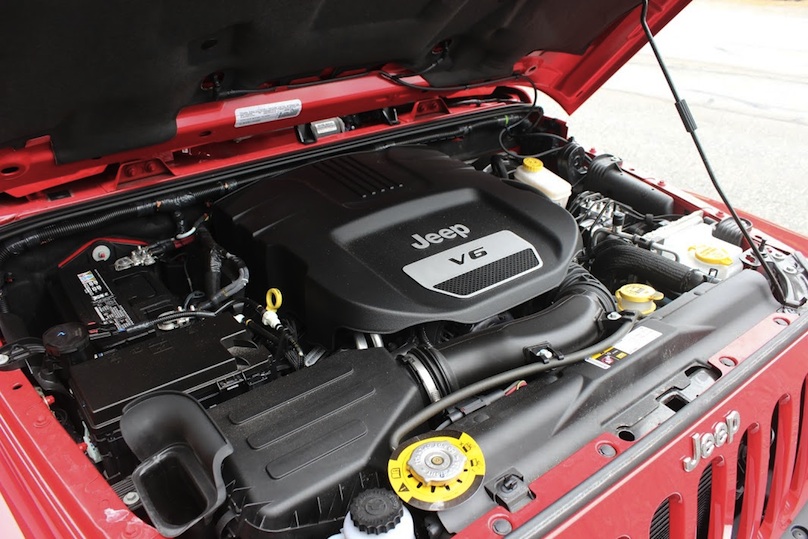 Well, “surge” may be overdoing it a little; I agree with Lacey in that the Wrangler Unlimited is not the sprighliest sprinter off the line, but then, that’s not really what a Wrangler is about, now, is it?

Indeed, low-speed traction on the rough n’ gnarly trail is where this vehicle should excel, and excel it does, with an immensly capapble off-road system that features a low-speed transfer case and locking differential for when you really want to tackle a rock or seven.

Of course, to really get the most of any off-road chops the Wrangler has, you’ll probably want to opt for the manual transmission, giving you more control of the drivetrain and saving you $1,890 in the process.

Thing is, the occasionally jerky progress you’re more likely to encounter with a stick shift will just compound what is already a fairly, we’ll say “robust” ride around town. Just another one of thoser Wrangler-isms you have to deal with.

LE: There are several trims available starting with the base Wrangler Sport starting at $23,190. If you want to do some serious off roading, then the top Rubicon trim would be your choice and it starts at just over $36,000. I have had the Sahara Unlimited this week and I think it’s the right choice for someone like me who wants some creature comforts as well of some light off road capabilities. The Sahara comes standard with satellite radio, remote start, keyless entry and A/C. Add on the optional Uconnect with 6.5-inch touch screen and navigation, leather faced and heated front seats and what more do you need to be comfortable? The only thing that’s missing for me is a back-up camera. It wouldn’t make things more comfortable, just a bit easier to maneuver and park. 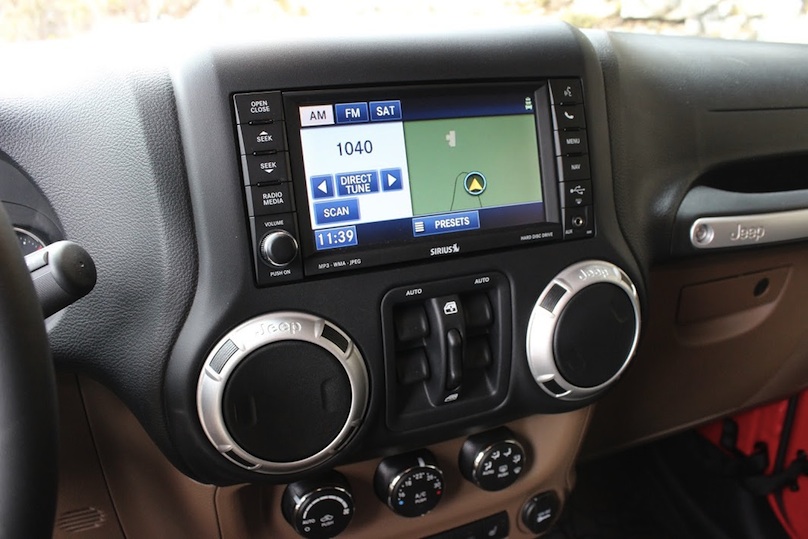 DH: Tech? We’re talking about tech in a story about the nuts n’ bolts Wrangler? Well, so be it.

Yes, the lack of a back-up camera is a definite shortcoming; the Wrangler, especially in Unlimited form, is a large vehicle, and that spare tire on the back doesn’t make things any easier in the parking department. Then again, when it comes to ultra-focused vehicles, the Wrangler isn’t the only car committing the no back-up cam crime; the all-new Miata MX-5 doesn’t have one, either.

It has everything else, though; features that would’ve had many a Wrangler purist cringing not ten years ago. Power windows? Check. Seats? Yep. Auto climate control? You bet, and we already talked about the power mirrors. It even has an auto-dimming rear-view mirror, heated seats and satellite radio. You really don’t need much more than that.

LE: The Jeep Wrangler offers incredibe versatility for all kinds of fun and adventure. Nope, it’s not the most comfortable driving or luxurious looking vehicle out there. But no other car on the road offers topless fun in the summer and a feeling of confidence and safety in the winter.

DH: We touched earlier on the purity of both the Wrangler and MX-5, and I want to revisit that for just a second. I want to revisit it because in this age of sedans being called coupes, wagons being called crossovers, pickups being called “lifestyle vehicles” and everything in-between, vehicles that are as singularly focused as this are becoming fewer and farther between. It’s nice to step into a vehicle that makes no bones about it; it gets the job done, simply, without fuss, and without a million electronic doodads. Thank goodness for that.