A Canadian success story, GM’s compact crossover siblings, the Chevrolet Equinox (left) and GMC Terrain, were recently updated with a mid-cycle makeover for the 2016 model year and both built at the CAMI plant in Ingersoll.

The trouble with twins is that the similarities can sometimes overwhelm the differences.

Especially when it comes to nearly identical twins like the Chevrolet Equinox and GMC Terrain.

These two different, but oh so similar models are, for the most part, Canadian-built, usually produced side-by-side on the same assembly line at the CAMI plant in Ingersoll with some overflow production coming from the GM Canada’s Oshawa plant and from the former Saturn factory in Spring Hill, TN.

Co-incidentally, according to the manufacturer’s plates on the doorposts, both models driven here rolled off the CAMI line in August, 2015.

But their real beginnings traces back to the 2005 Chevrolet Equinox, the first-ever crossover in GM’s lineup, followed a year later by the 2006 Pontiac Torrent. With passing years and Pontiac’s demise, a reworked, second generation 2010 Chevrolet Equinox was followed more quickly by a new sibling, the 2010 GMC Terrain. 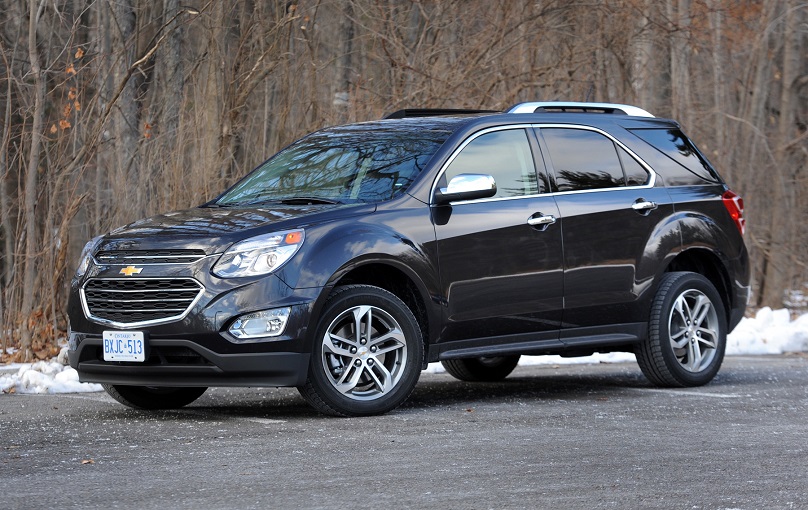 The Equinox comes standard with a 2.4-litre inline four-cylinder Ecotec motor rated at 182 hp and 172 lb/ft of torque. Enthusiasts tend to pooh-pooh this engine as being anemic and lacklustre, although I found it perfectly serviceable for day-to-day driving chores. Fuel economy is rated at 11.5/8.2L/100km (city/hwy), bolstered by an Eco mode. My real-world results averaged out to 10.9L/100km (comb). 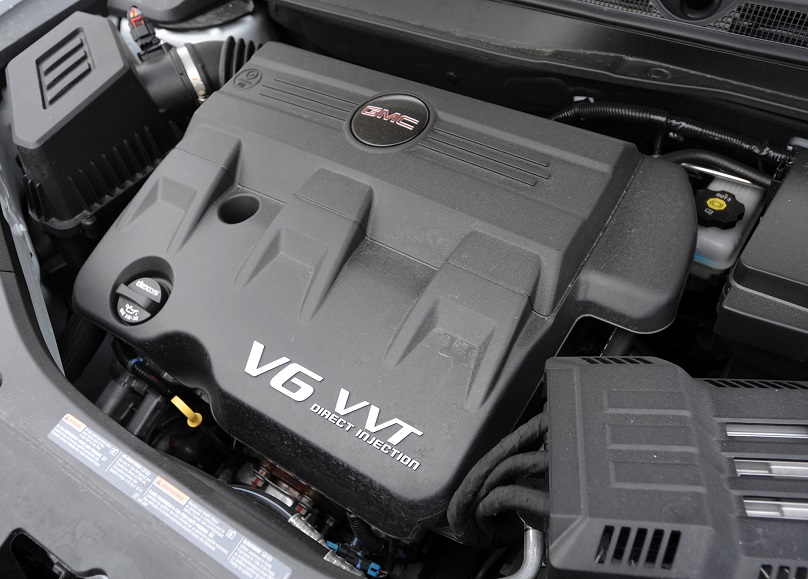 More about this engine later.

Both motors are mated to a six-speed automatic and front-wheel-drive (FWD) or an optional all-wheel-drive (AWD) system ($2,200) available in upscale versions.

It does, however, take $3,500 worth of option packages to add technologies like forward collision alert, side blind zone alert, rear cross traffic alert, lane departure warning and ultrasonic parking sensors, along with an upgraded eight-speaker Pioneer audio system. 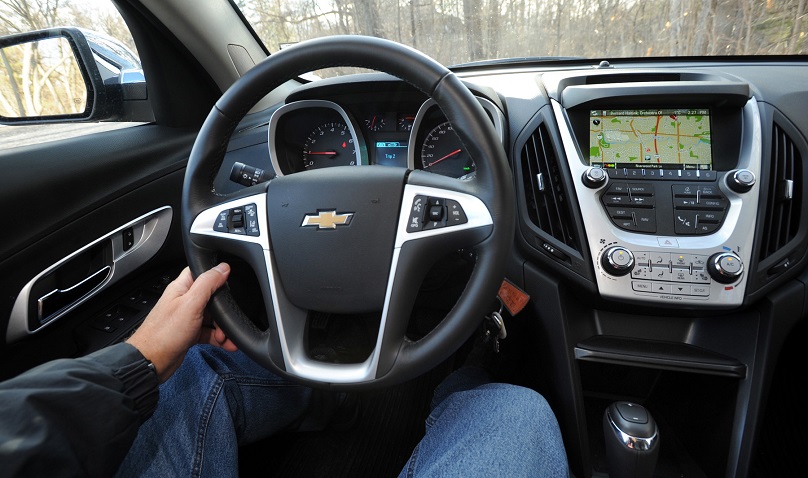 Some of the interior trim pieces, including metal-look dash and door inserts seem a little too plasticky-tacky for this pay grade but, for the most part, the Equinox hits the expected crossover buttons – family-style comfort for five, a raised SUV-like vantage point, confidence-inspiring AWD, 892 litres of cargo room expanding to 1,804 litres with the second row flopped forward and enough amenities to please the passengers. This tested Equinox even added universal tablet holders ($290) to help placate the backseat rug rats. 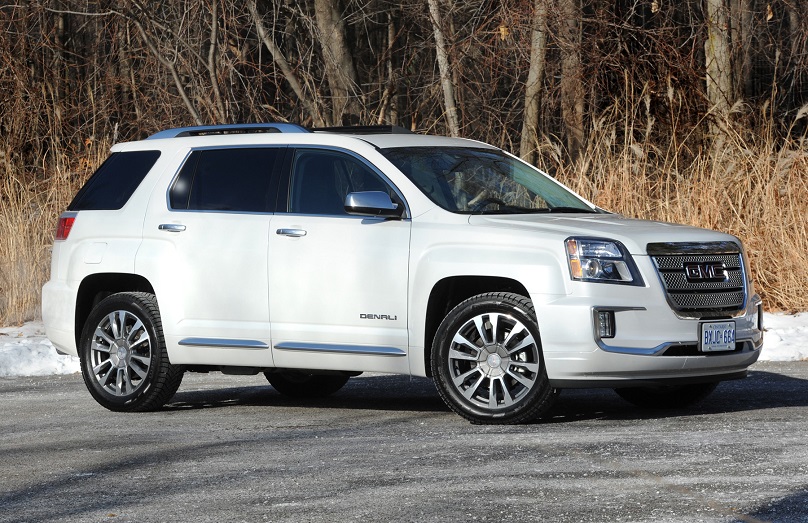 Our second test ride, a fully loaded GMC Terrain Denali model, has even more equipment than the Equinox LTZ, and more of it comes included within the trim level instead of being added in optional packages. The interior almost mirrors the Equinox cabin, except for badging, a little wood simulation and red info readouts instead of blue, a cue carried over from the Pontiac era.

Our Terrain Denali ($42,365) also adds the optional 3.6-litre V6 engine ($2,165 in this case, including 19-inch wheels and a few other goodies). That more muscular motor makes 301 hp and 272 lb/ft of torque, which works out to substantially more oomph than the four-banger.

But the power difference is notable, allowing for more responsive get-up-and-go, more confident passing ability and a viable 1,588 kg tow rating instead of the four-cylinder’s 680 kg rating.

So, having driven the Equinox and the Terrain, the 2.4-litre Ecotec and the 3.6-litre V6, which to pick? 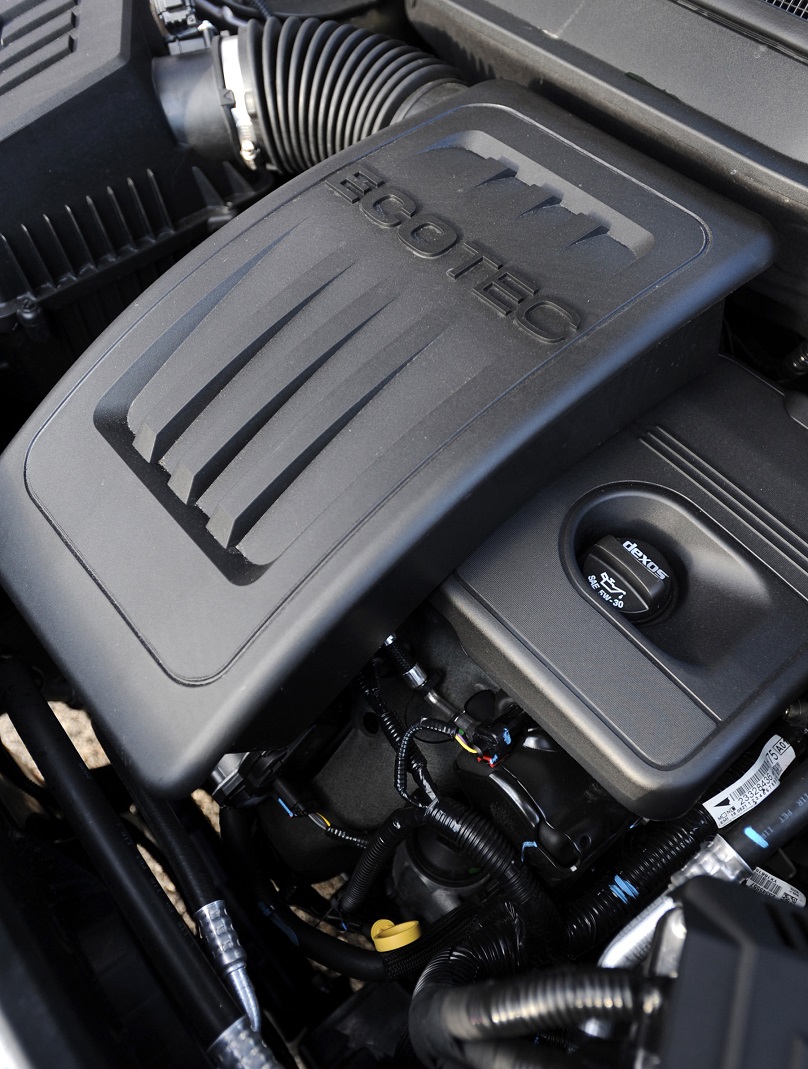 Well, brand beauty is in the eye of the beholder.

The GMC lineup is pricier but also slightly upscale with more included equipment, although I’d probably opt for Chevy pricing. And as for engines, if you can afford the extra cost of the V6, go for it. But unless you’re towing a lot of big boy toys or running a Weight Watchers carpool, the Ecotec four-cylinder seems more than adequate, saving you the $2,200 V6 cost along with fuel savings. The price sheets estimate an annual 20,000 km fuel cost of $2,180 (4cyl) compared to $2,790 (V6).

The Chevrolet Equinox and GMC Terrain have exhibited surprising staying power over the past few years and when you add the sales numbers of these twins together, which is only fair, they rank within the top ranks of Canadian SUV/CUV sales and are slotted firmly in the number one SUV sales spot in the U.S.

With that kind of staying power, the recent 2016 makeover will tide this generation of vehicles over until a rumoured, new smaller, lighter weight lineup debuts, probably sometime next year as 2017 or 2018 models. 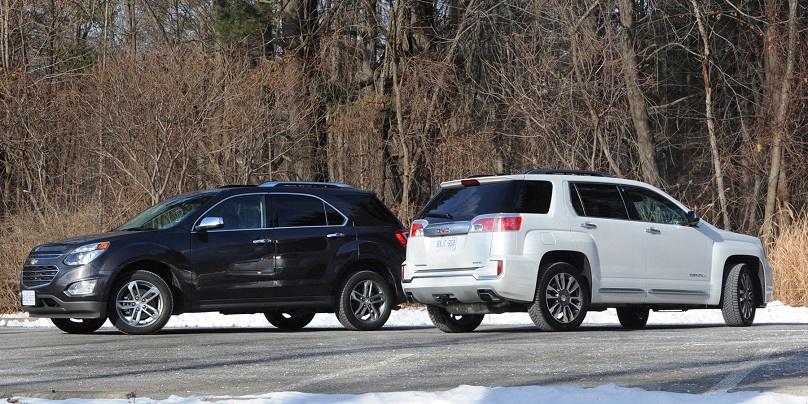