When Toyota announced its world debut of the new GR 86 — successor to the 86 GT of Toybaru twins fame back in April, I was worried. Very worried.

Having recently tested both the latest (and last) Toyota 86 GT and Subaru BRZ back in the fall, I simply couldn’t believe the new version would be able to capture everything that was special about its predecessor in the year 2021.

The 86 GT / BRZ / FRS was a flawed car, make no mistake. But in the age of electronic driver aids, increased weight, needless turbocharging, irritating collision warning systems, and performance-enhancing automatic transmissions taking the spotlight away from the humble manual … the 86 GT was something very special in its profound lack of sophistication, and prioritization of pure driving joy over literally everything else.

That said, the drawbacks were many, and so while I truly loved the 86 GT — I would never have considered buying one.

However, I’m happy to report that after spending 24 hours with the 86 GR prototype currently making its rounds through every auto publication in Ontario, I would consider buying a 2022 GR 86.

The GR 86 very much keeps the driving spirit of the 86 GT alive, while vastly improving on it in some very key areas. 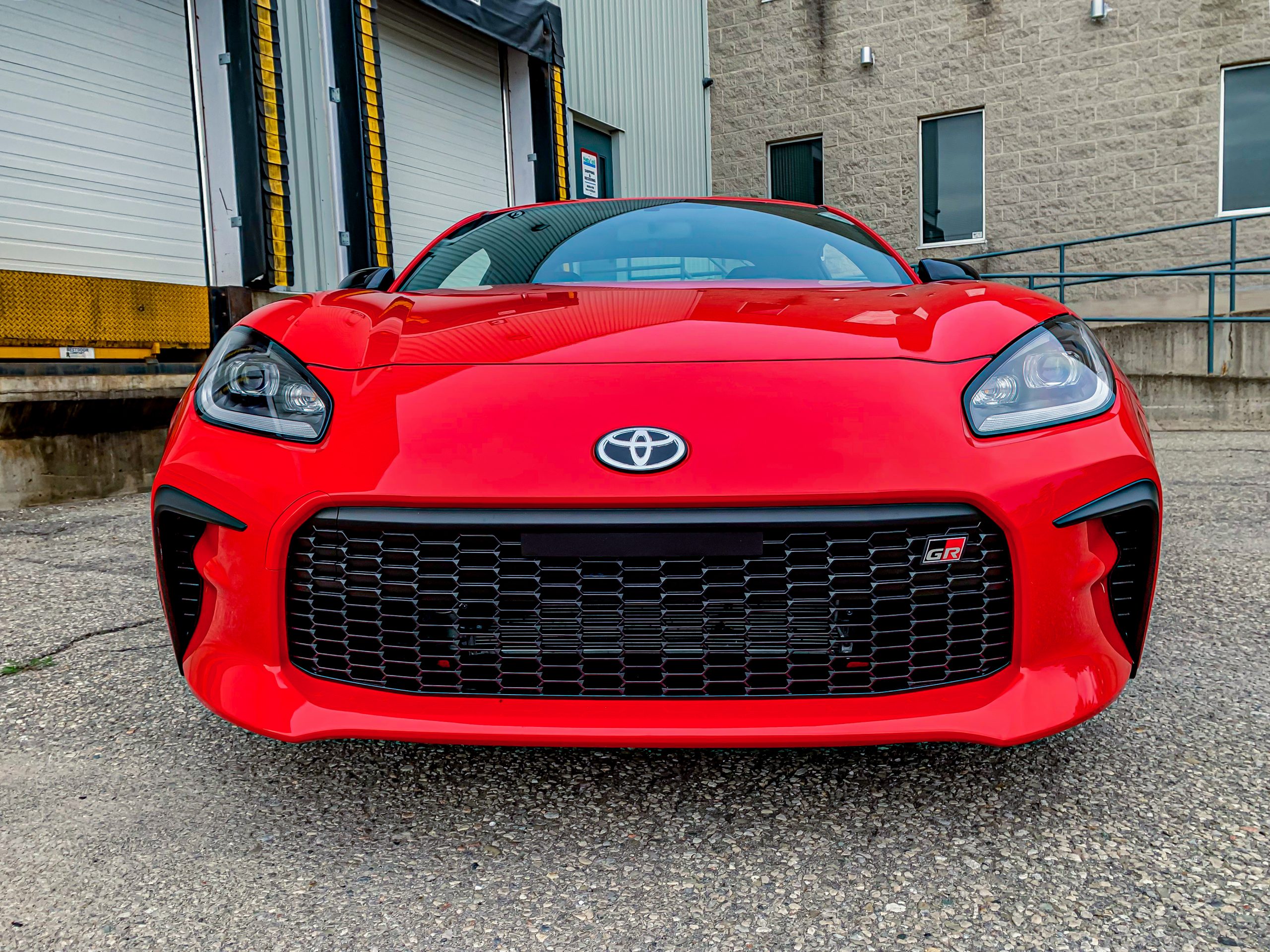 The old 86 and BRZ really were getting on a bit. While it may have been refreshing to see such a clean, simple, classic rear-wheel drive sports car design back in the early ‘teens, here in the roaring ‘20s, the Toybaru twins were starting to look a little bland, even featureless.

Which is to say nothing of the interiors, which always felt like a push and pull between Toyota and Subaru — a cacophony of design languages and materials.

Things were even desperate under the hood — where a red-painted intake manifold accented the engine in an eye-rolling attempt to capture the youth vote.

The GR 86, by contrast, has an interior with a much more confident and consistent design language. It still feels like sitting in a proper sports car cockpit as you hunker down low and stare out at the two massive fender flares over the hood. But there are less competing materials and shapes on the inside. Even the UI in the infotainment system seems to have struck a happy medium between Toyota and Subaru’s current systems. 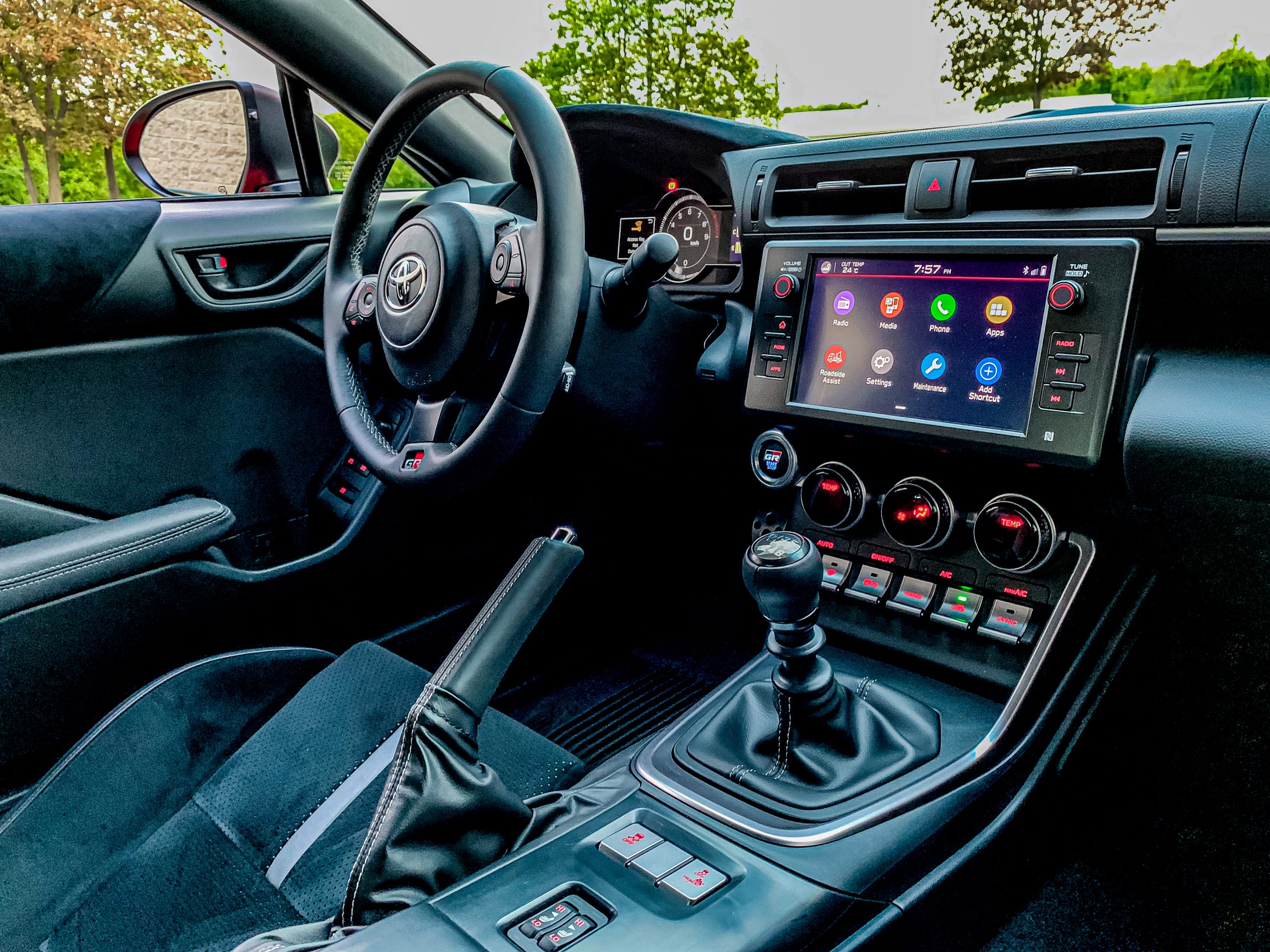 Then there’s the outside. Which is simply gorgeous. The initial concepts looked too round, too fat, too jelly bean-like to my eye. I just thought, “Oh no, all they’ve done is make it bigger.”

But the final product, with it’s shark-like side skirts and tall rear bosozoku-esque rear wing looks sleek and aerodynamic. The bodywork highlights its front engine, rear wheel drive layout as it seems like the whole car sweeps back to the rear wing. I think it looks fantastic.

Under the hood, the engine is just black. No frills. No gimmicks.

The old 86 / BRZ had all the ride comfort of a stagecoach. Every minor bump sent your spine through the top of your skull. The seats were like sitting on boulders. The shifter was stiff and clunky and made smooth shifting at low speeds a challenge.

Overall, the car only ever really worked when you were flogging it.

The GR 86’s newly found 28 lb-ft of torque from its new 2.4-litre boxer engine (more on that later) and linear torque curve means you don’t have to shift around the infamous “torque dip” which plagued the old car. The car can now creep in third gear and modulate speed easily in sixth gear when cruising. 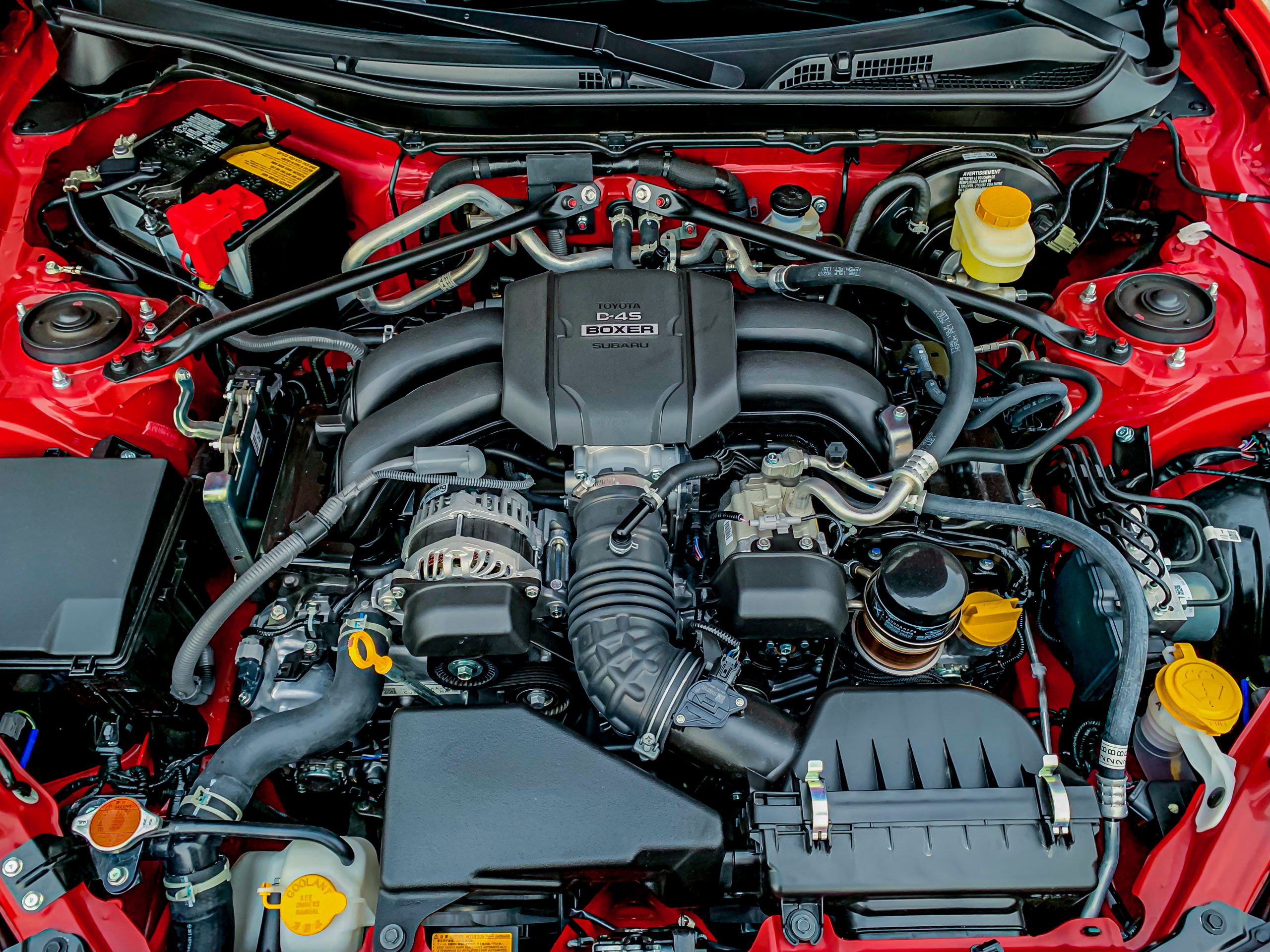 Yes, part of the fun of the old car was you had to shift it, but that became completely exhausting over long journeys and made low-speed navigation cumbersome.

Moreover, the shifter action in the manual transmission variant (the only one to bother buying, really) has seen a massive improvement over the old model. Shifting action is now smooth and slick as you row through the gears, compared to the old car’s harsh “clunks”, especially at low speeds. That being said, the shifter still communicates the right amount affirming feedback when selecting a new gear.

The new premium leather seats available in our as-tested Premium model bolster as well if not better than the previous generation seats, while also being plush and cushy. I’d go so far as to say that they sit just a tier below the epic Honda Civic Type R seats in terms of both comfort and side bolstering.

The suspension is also far more compliant. Take the 86 GR over bumpy Toronto roads or train tracks, for example — it may still not be Cadillac smooth, but it no longer feels like going through a dryer’s spin cycle.

Inside the cabin feels much more spacious than the outgoing model, which always felt a tad cramped, even claustrophobic for someone over 6-foot tall. The backseat is still in name only and the trunk is only large enough for only the smallest of grocery runs. But this is still a sports car after all, so some compromise is to be expected. 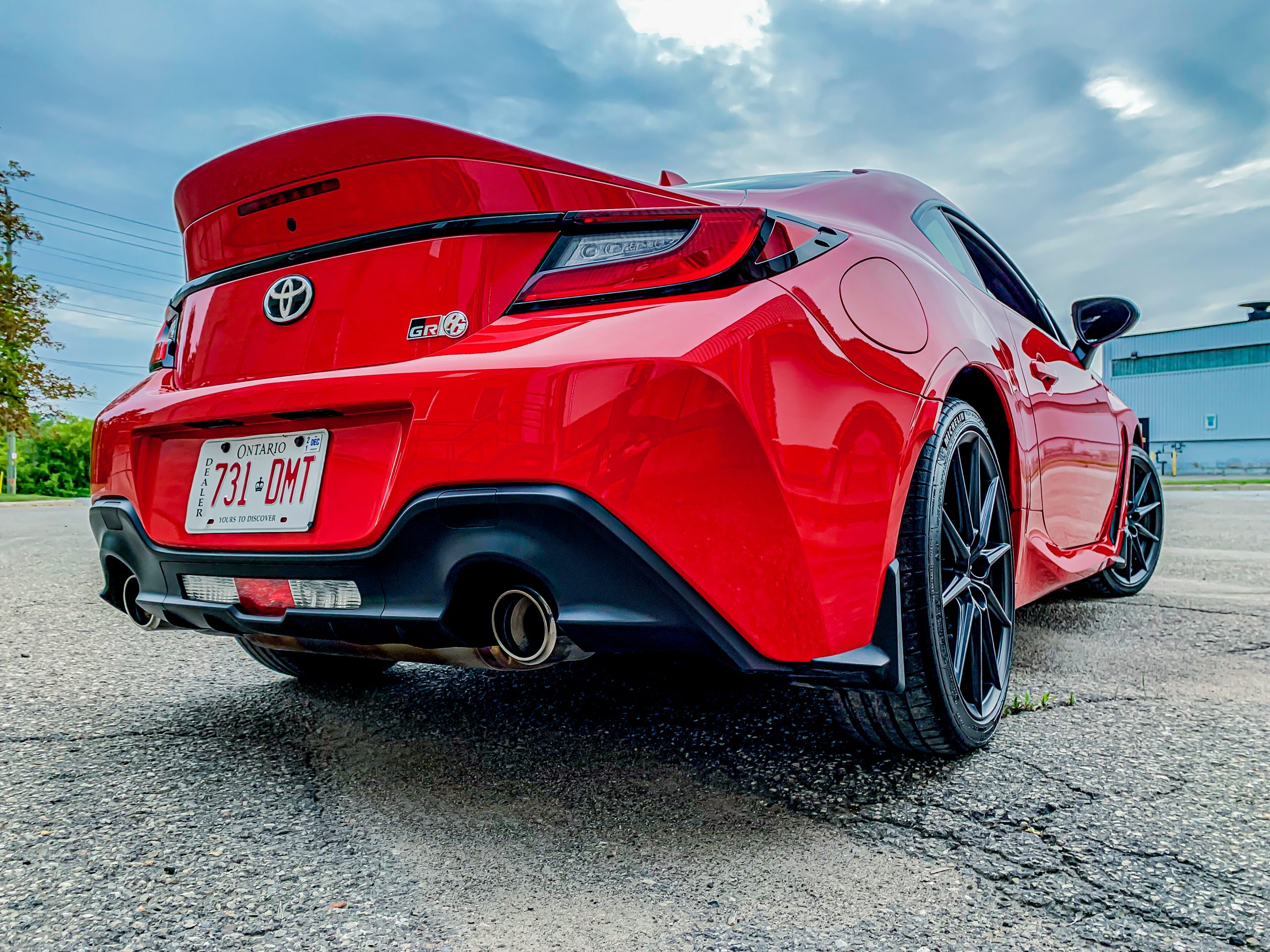 You’ll find all kinds of infotainment goodies on the inside like an 8-inch touchscreen display and an eight speaker audio system (the standard model will have six). It’s also Bluetooth capable and Apple CarPlay and Android Auto compatible.

But honestly, I didn’t really muck about with any of that. In fact, the best thing about the GR 86 is how effectively it makes you forget about your phone… or anything else with a screen.

The big headline here is that zero to 100 km/h times have dropped from 7.2 to 6.3 seconds for the manual transmission variant and from 8.2 to 6.8 seconds for the automatic (again, no reason to buy the auto here).

That full-second difference is felt throughout the entire rev range. The new 2.4-litre boxer engine is far more effective at delivering constant torque, especially down low where the old car often lagged.

There’s just more grunt to the thing when you put your foot down. It’s more of an event and the car is so much more eager to speed you along.

The extra power is thrilling when you start to push the car, but it isn’t so much as to always risk you getting into trouble. Like the old car, you can still cane the GR 86 and have a blast within the speed limit, ripping through the gears. It’s just that there’s way more adrenaline being injected into your heart when you do so.

It’s not a feeling of barely restrained, intense power in the GR 86. It’s not a dog straining at the leash. It’s more like a well-behaved Border Collie, ready to take off on your command. 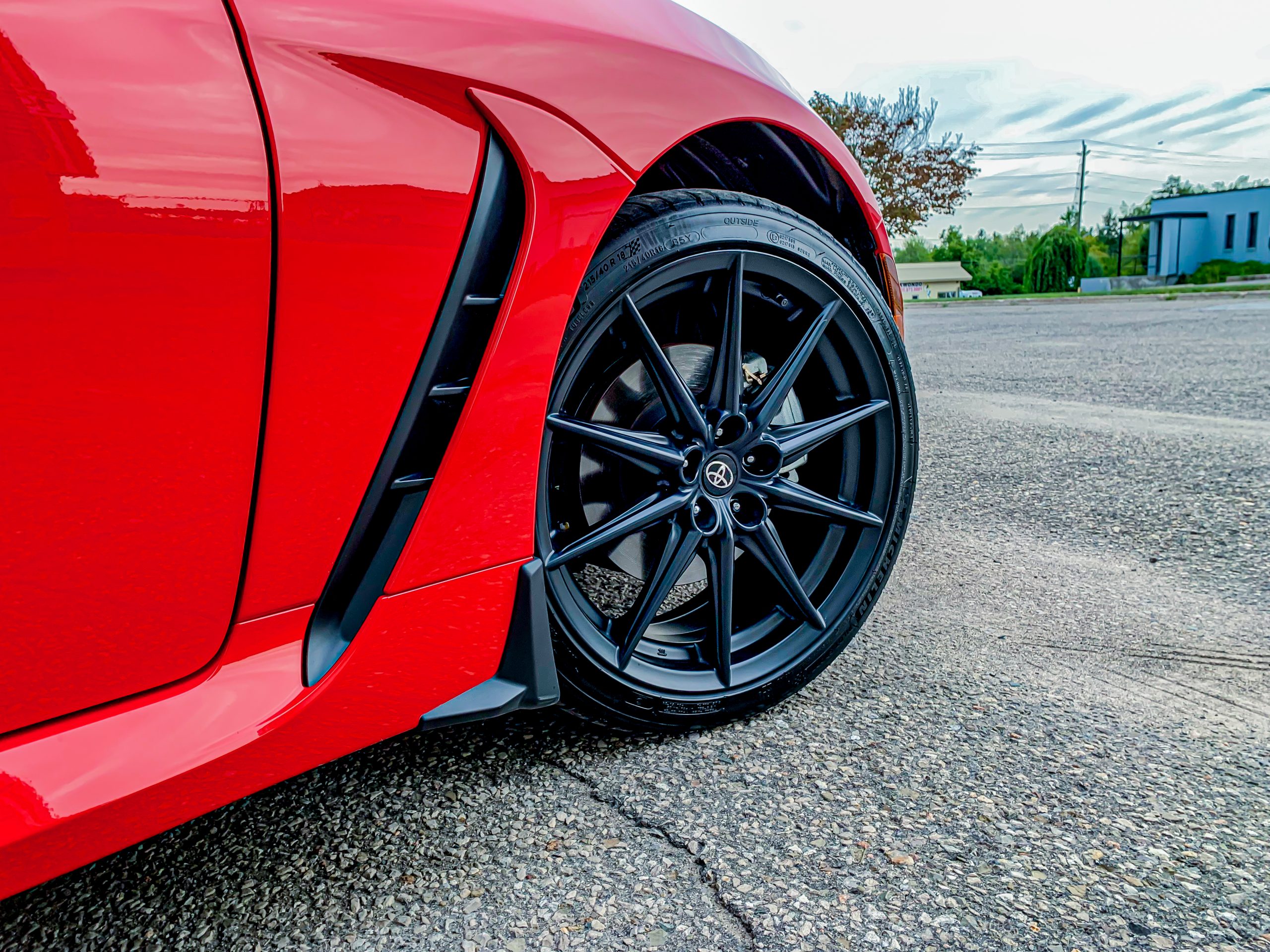 Like the old 2.0-litre variant, the new engine still utilizes Toyota D-4S dual injection technology and features its signature top-mounted oil filter. However, power output has increased from 205 to 228 hp and from 156 to 184 lb-ft of torque.=

Michelin Pilot Sport 4s were equipped on our Premium tester and stuck the car well when you wanted the car to behave. On the subject of behaving, the GR 86 feels like it rotates much more towards the centre of its mass than the old car, so cornering feels like telepathy.

Of course, if you don’t want your GR 86 to behave, flip the car into Track mode by holding down the “Track” button located just behind the shifter nearest the passenger. After being greeted with a new digital gauge layout which favours revs over speed, you’ll have no problem roasting tires off the lights and sliding the car sideways when you jam the throttle without Debbie Downer traction control stepping in to kill your buzz.

Not that I indulged in such immature acts, of course (if you’re reading this, Toyota). 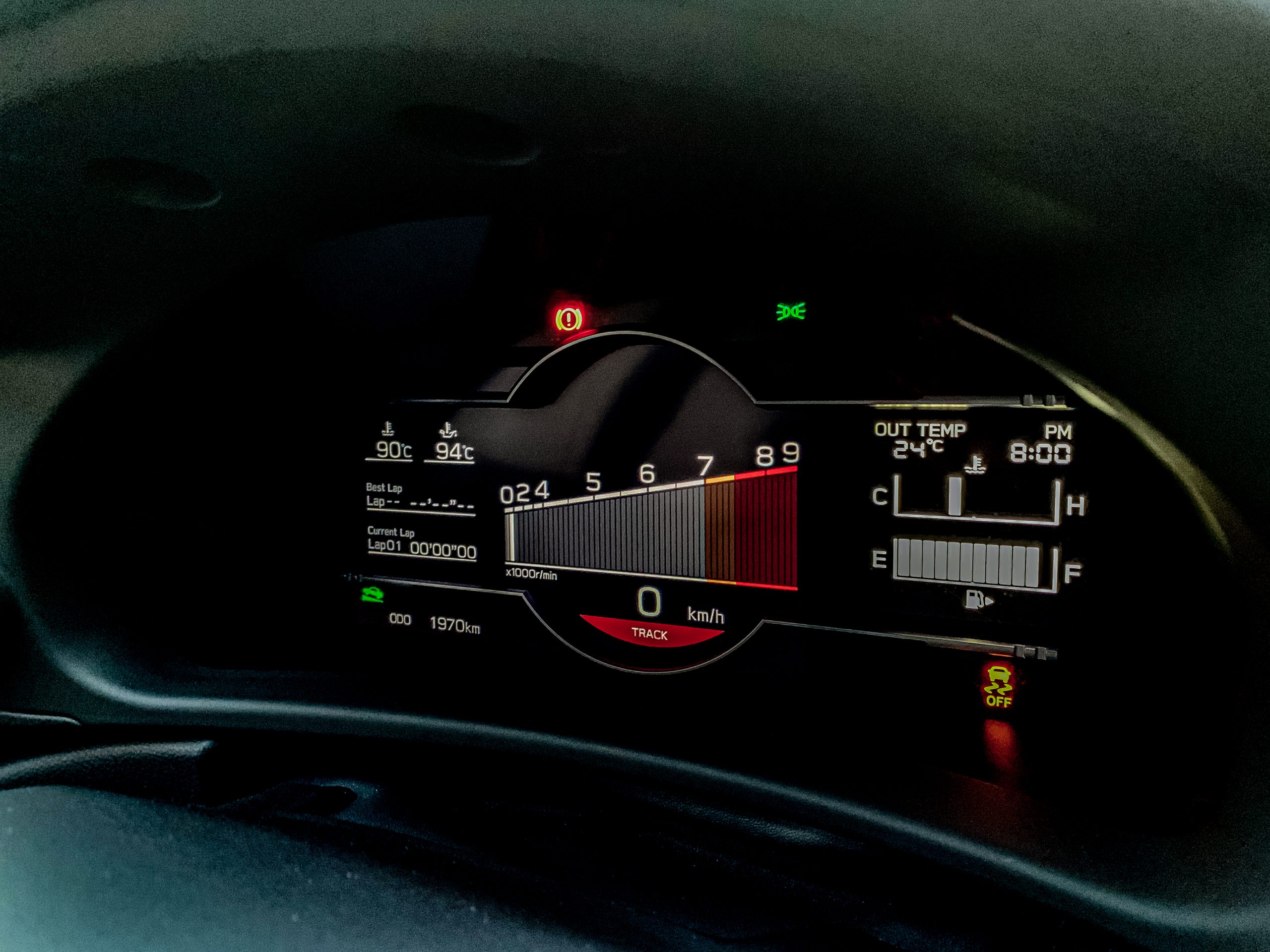 Tweaks to the intake and exhaust system have also vastly improved the engine note. While the old engine sounded like someone shouting at you under water, the new engine sounds decidedly crisper and more musical.

I can’t tell you how pleasurable it is to whip the GR 86 around corners, putting all that newfound torque down, matching the revs yourself, sliding the gear shifter into place with rifle bolt-like action, and being able to place the light front end of the car exactly where you want it. It’s both meditative and highly stimulating at the same time. Like doing yoga while listening to death metal.

How good does it feel to drive the GR 86? Think cold beer on a hot day, fresh cookies out of the oven or making out with your longtime crush for the first time levels of good.

This could have been so easily spoiled. All-wheel-drive. Auto-rev matching. A dual-clutch transmission. A turbocharger. All would have ruined the simple driving bliss the Toyota 86 provides.

The GR 86 isn’t a page one rewrite. It’s just a really solid revision. A new draft, addressing all of the bumps that came up when we read the last one.

And thankfully, it hasn’t thrown out the baby with the bathwater. 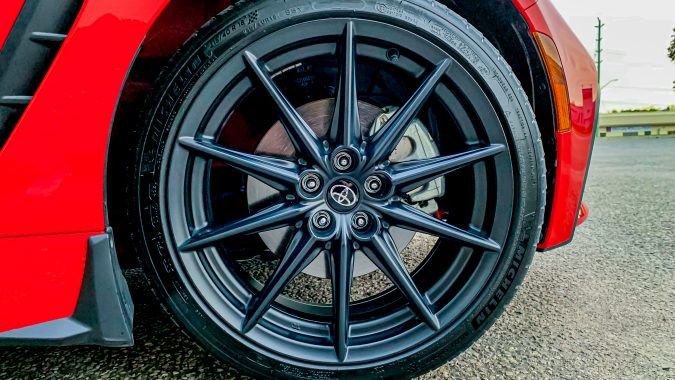 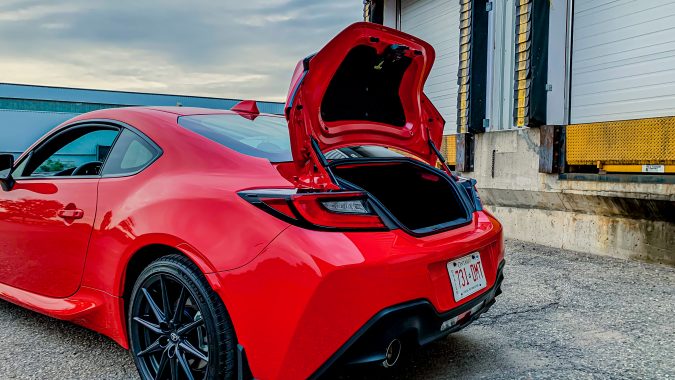 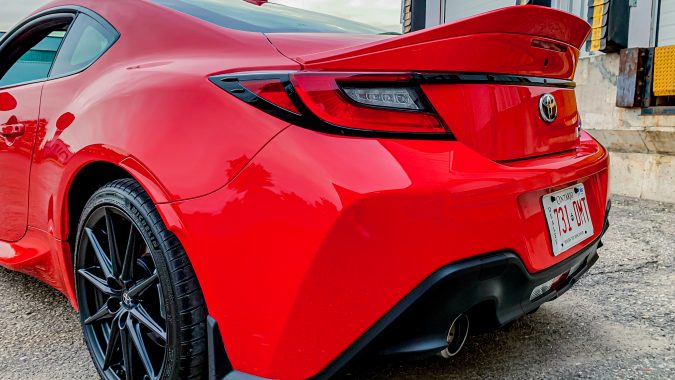 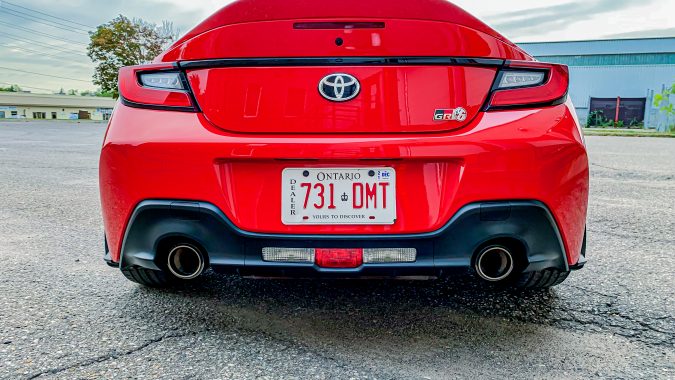 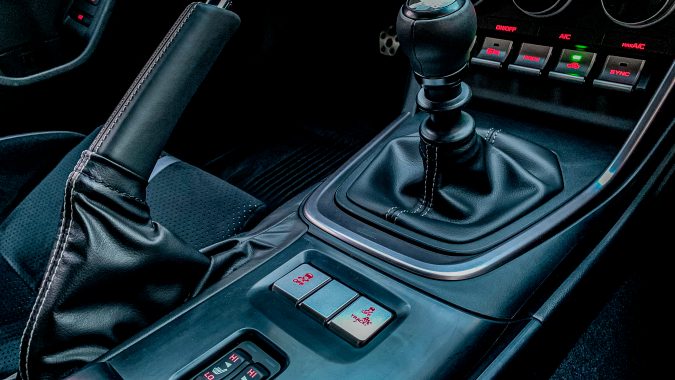 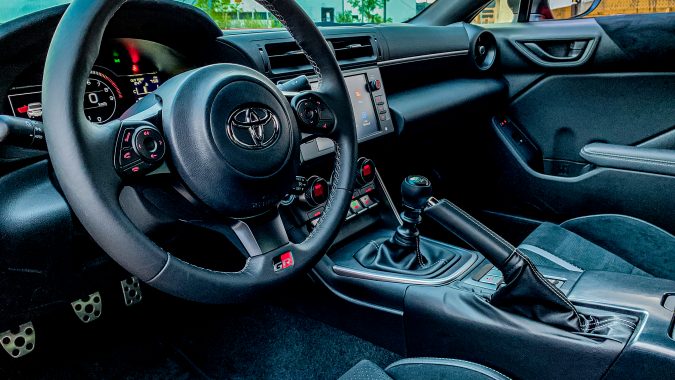 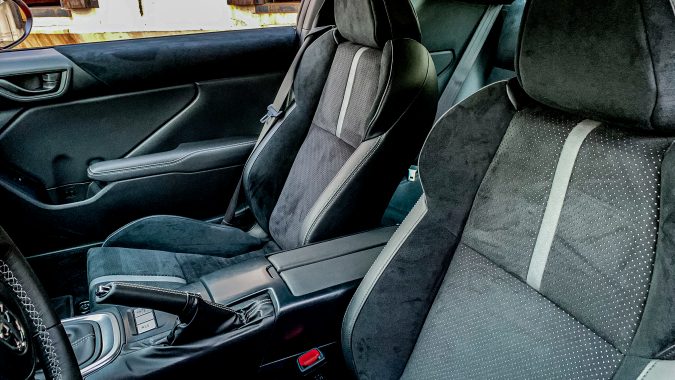 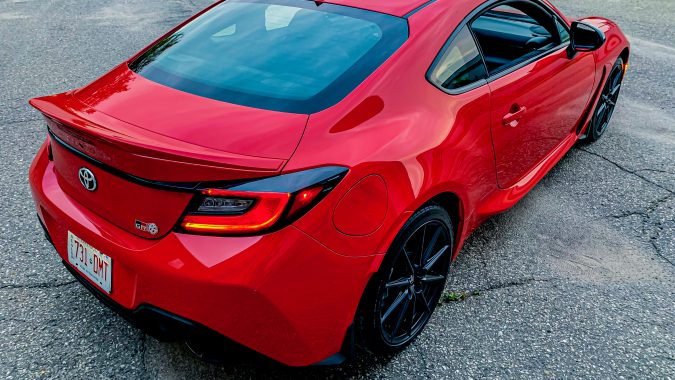