Classier, but it’s still the Civic you know.

A new Civic is a big deal, especially here in Canada where it’s been the best-selling car for 23 years. The minute a new one is released you see them everywhere. It’s like the buyers literally line up outside the Honda store waiting to purchase their shiny new cars like it’s the latest Jordan shoe drop.

You might have some trouble spotting this one when it goes on sale this summer, possibly mistaking it for an Accord, and we won’t blame you. Upon first glance, the new Civic has dropped the edgy act and taken many notes from its older brother.

It’s longer, and wider, and more understated and has the Accord’s coupe-like profile. The Civic has matured but there’s a stronger family resemblance to the rest of Honda’s offerings. The maturity carries over into the cabin where Honda’s designs of yore have sometimes come across as radical. Remember the gauge cluster on top of another gauge cluster? There’s none of that here, but the new cluster is fully digital for the first time on the top-end “Touring” models.

Seated inside, this is one of the airiest cabins I remember, bringing to mind the models from the 90s that really set the bar for the Civic’s success.

The greenhouse is large and open with spindly A-pillars. It’s like sitting inside a fishbowl. There’s more room inside too and there’ll be less elbow clashing with your sitting mates front and rear. 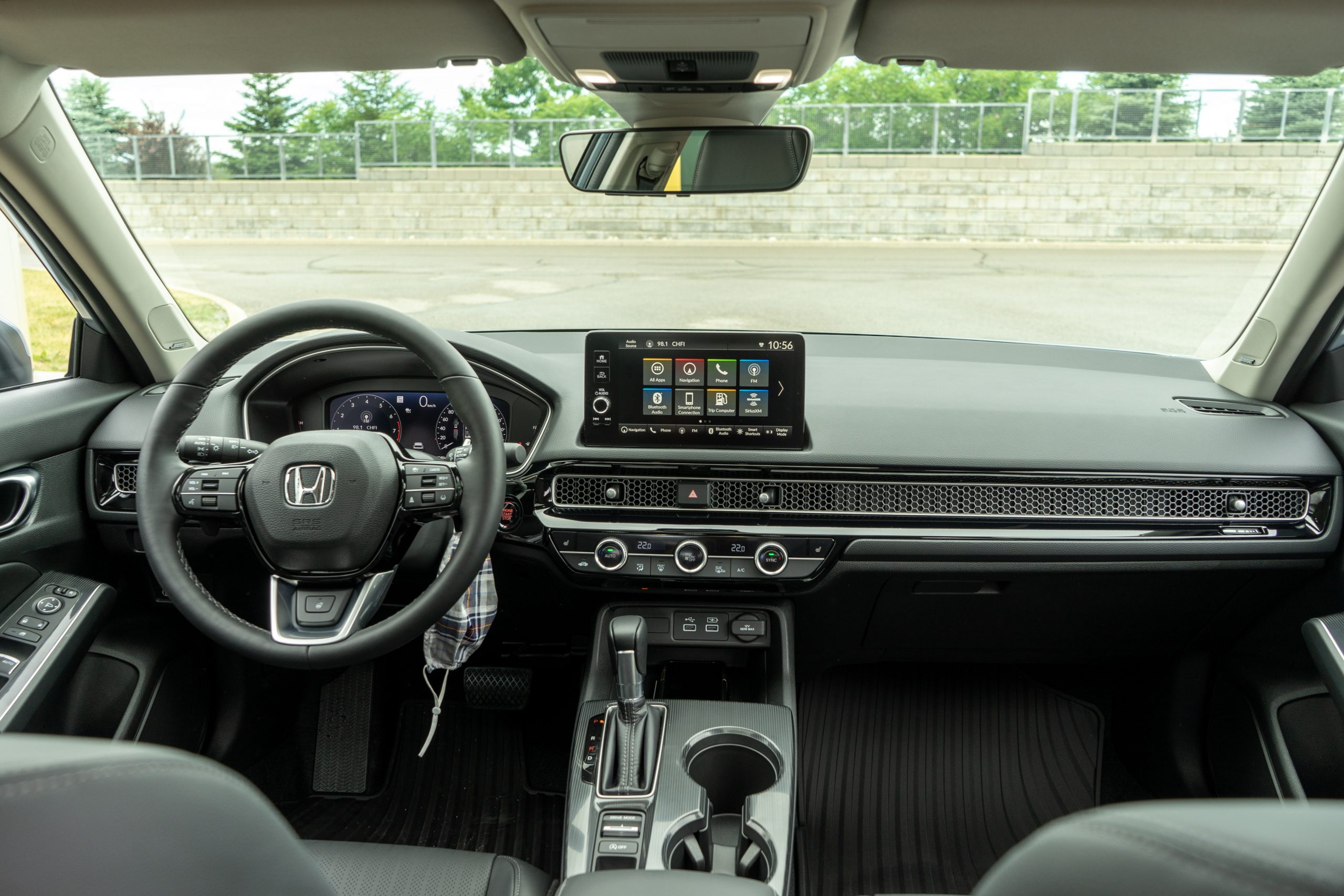 A completely new dashboard hides its heating and cooling vents underneath a grate hewn from hundreds of little hexagons. Small joysticks protrude through and allow you to direct airflow where desired.

The cowl is low and the seating position is excellent, once again aiding outward visibility. The only sore point is the touchscreen placed top dead centre on the dashboard that sort of spoils the experience a bit. It doesn’t get in the way or anything, but I miss how nicely integrated the old one was.

It’s a great interior space with some expensive feeling buttons and knobs with knurled metallic finishes. Honda has gone minimalist again and that’s a good thing. There’s an almost Audi-like vibe to it, and that’s a big compliment. 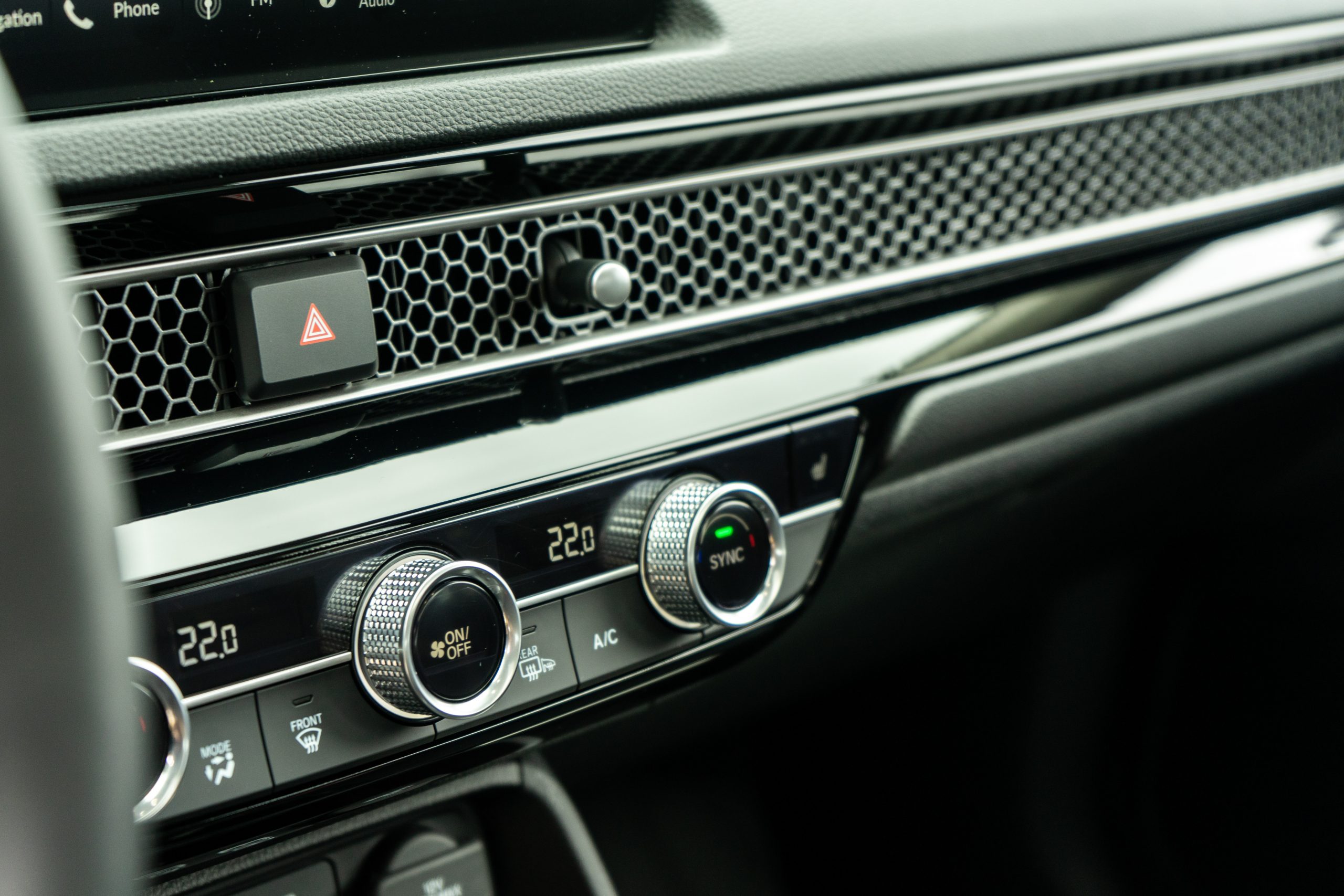 Under the hood you’ll find Honda’s 2.0-L naturally aspirated 4-cylinder delivering 158 hp and 138 lb-ft of torque driving the front wheels through its newly updated CVT. The “Touring” model made available for my test drive was equipped with a 1.5-L turbocharged 4-cylinder that pushed out 180 hp and 177 lb-ft of torque from just 1700 rpm. It too is hooked up to a CVT that drives the front wheels and which Honda claims is more efficient and offers greater response than before.

All 2022 Civics will get standard Honda Sensing with Traffic Jam Assist, blind spot indicators, a remote engine starter, and more.

If you want to manually shift your own gears, the sporty Si has your back, but it’s not here just yet. 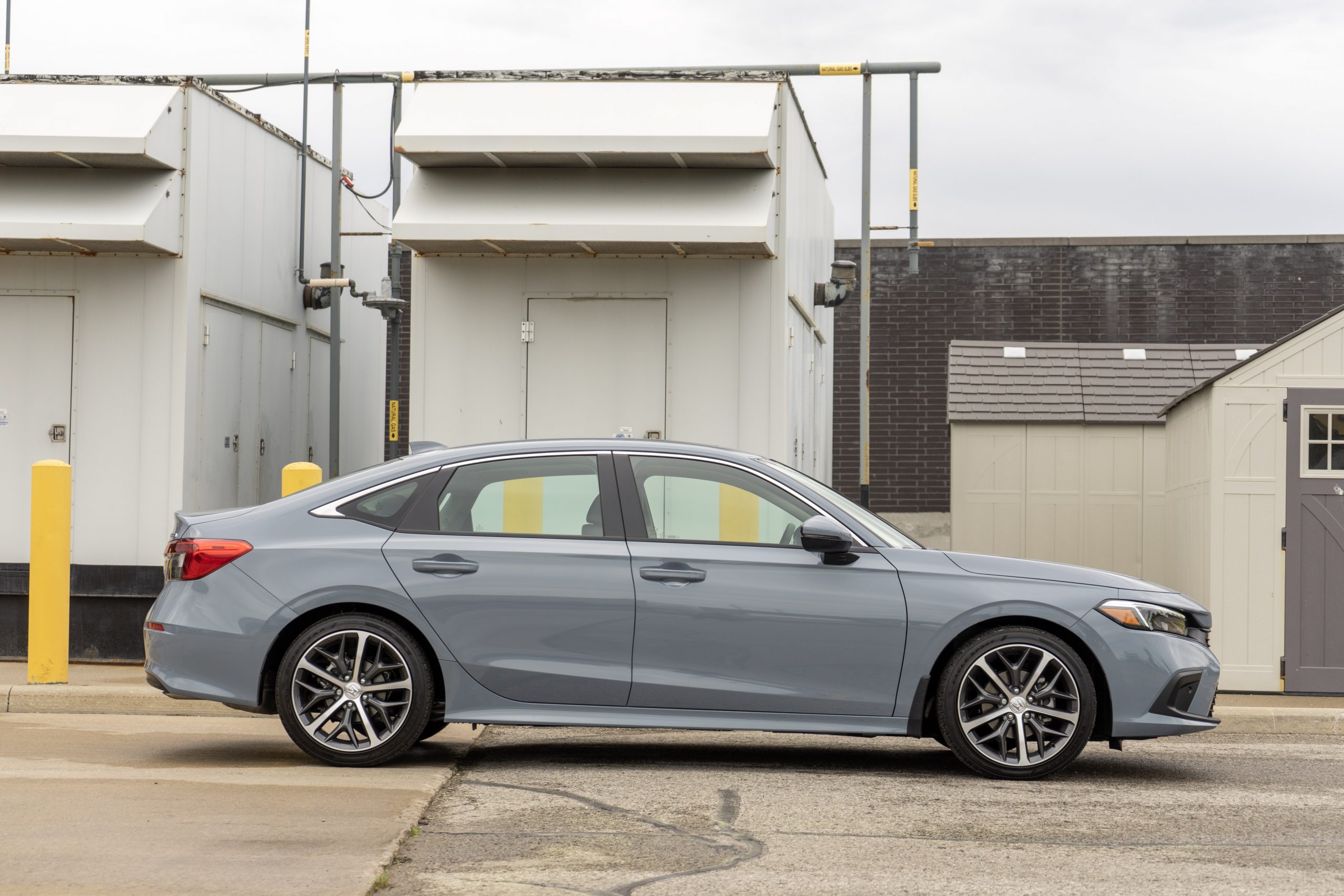 What we’re left with is a compact but rather upscale feeling sedan that looks great, but every Civic I’ve ever driven has a certain feel to it. They’re intuitive, easy to approach, and to drive. There’s a lightness to the controls and inputs, and you can get in any single one from any era and feel familiar with your surroundings in a matter of seconds.

Thankfully it’s still like that in this new one. Steering in traditional Honda fashion is naturally weighted and very responsive with great on-centre feel. On twisty roads the chassis is buttoned-down and body roll is kept at bay. The CVT still hangs on to revs under normal driving conditions and doesn’t feel as good as a traditional geared automatic, but in Sport mode it downshifts under braking as you approach a corner and aids brisk acceleration on the way out of it.

That CVT is likely responsible for the stellar efficiency I encountered through a mix of highway, suburban, and two-lane country roads. After about 250 km on a car with barely 600 km on the clock, I saw a displayed 6.7L/100 km, which is hybrid-like efficiency. This included many full throttle runs and a general disregard for driving in an efficient manner. I did briefly try out Eco mode, but spent most of my time in “Normal” and “Sport”, accessible through a drive mode selector you get on the “Sport” and “Touring” trims only. 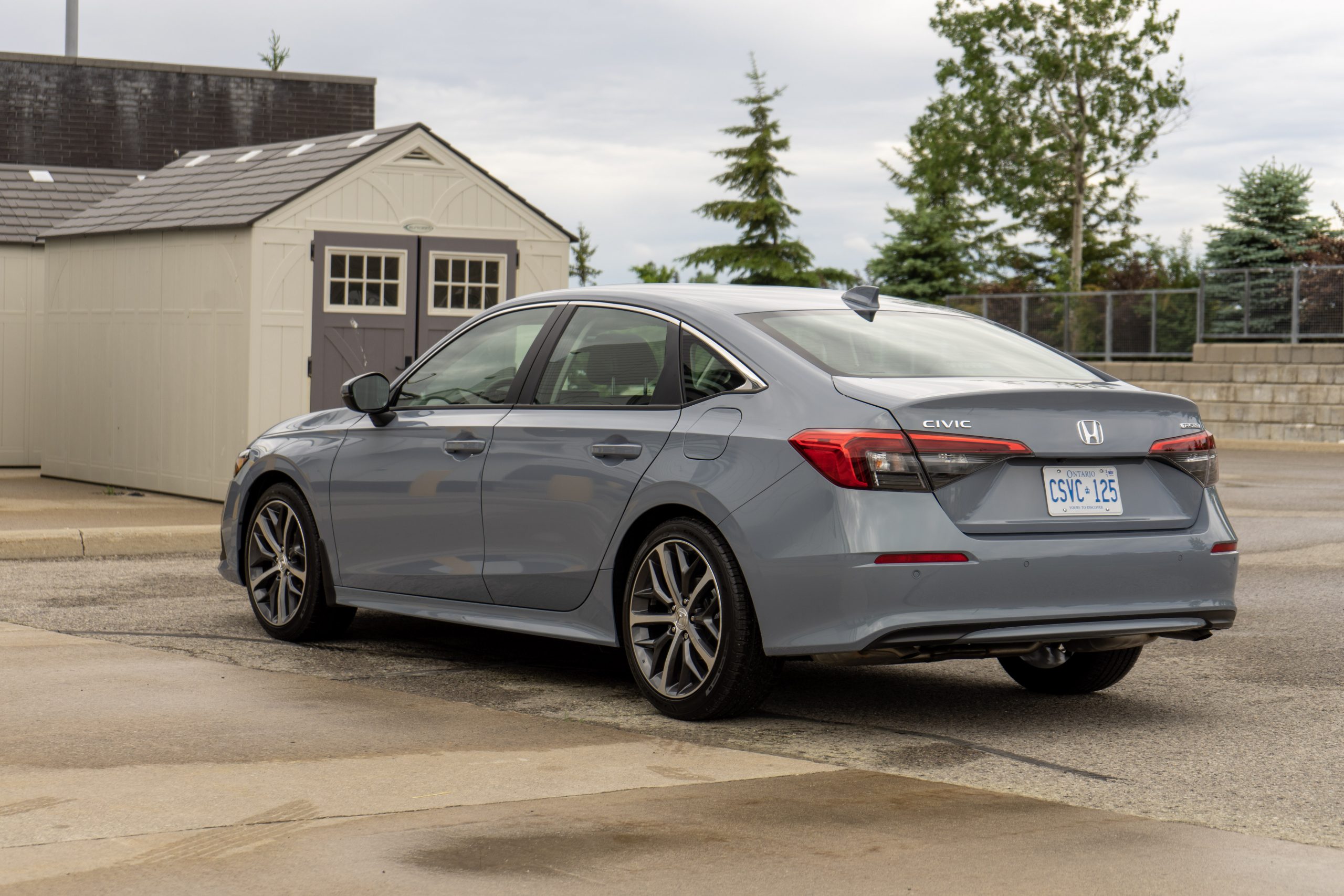 Most un-Civic like with this new generation is the lack of interior noise. There’s less road, wind, and tire noise making this feel more like an Acura product. The engineers have used urethane spray foam to fill voids and other sound-absorbing materials on the underbody and throughout the chassis.

It’s the stiffest Civic too, with 10 times more structural adhesive and increased use of aluminum and other lightweight materials.

You can feel all this on the road and it will pay dividends when the sportier models like the Si and Type R arrive, and we can’t wait. You can start lining up for the Civic at your nearest Honda store this summer. 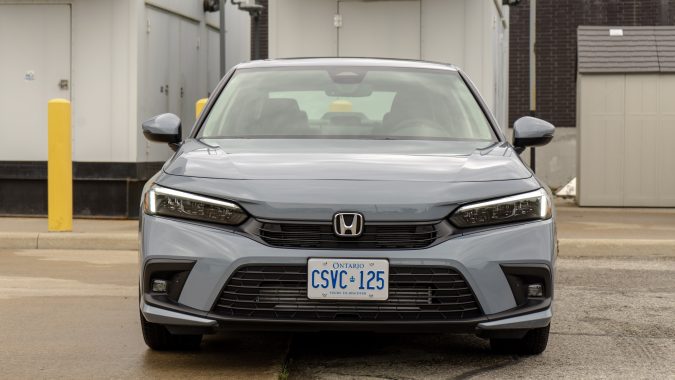 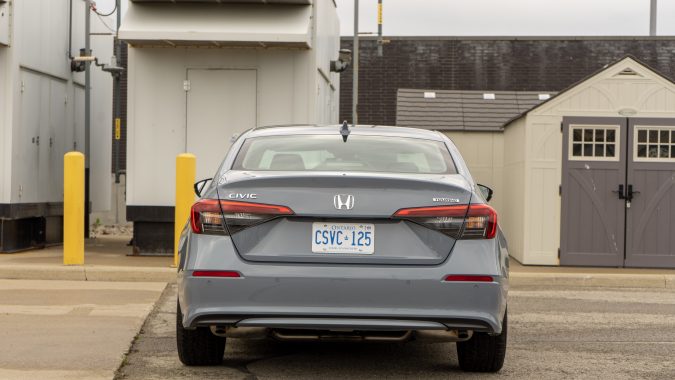 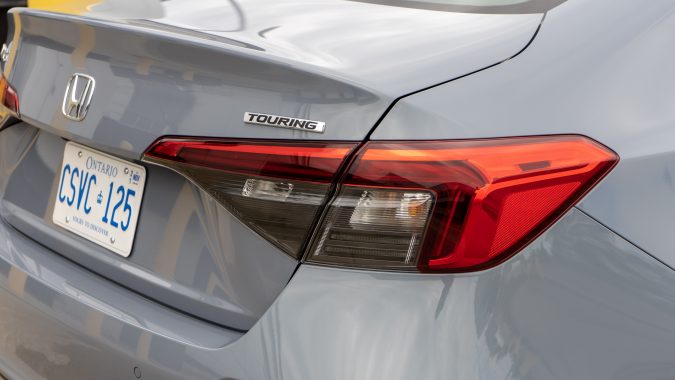 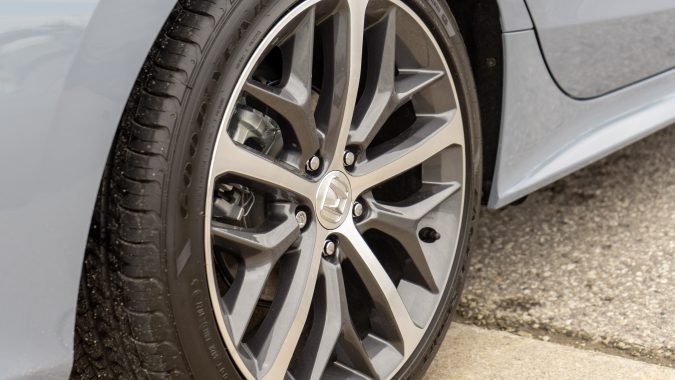 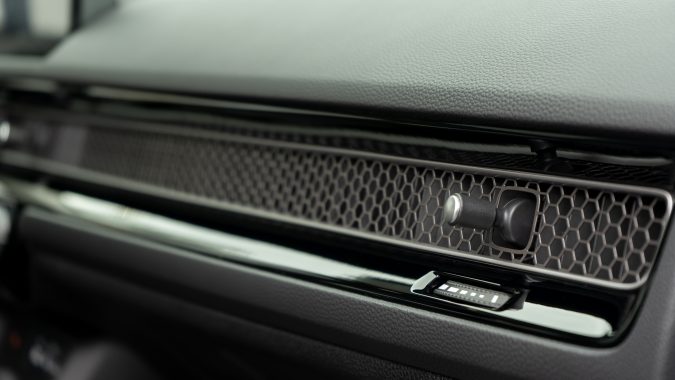 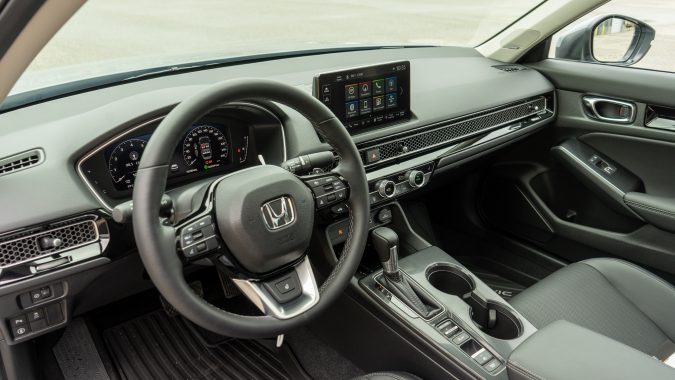 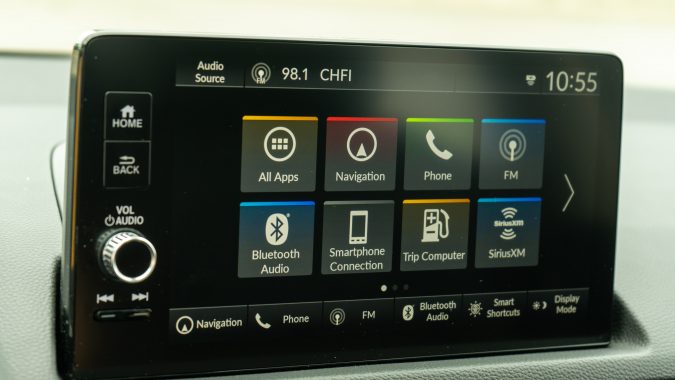 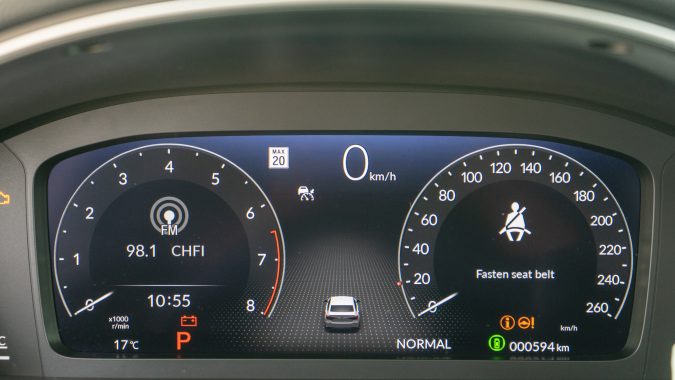 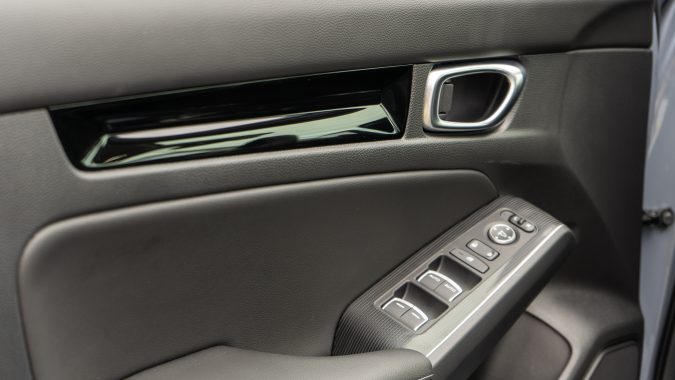 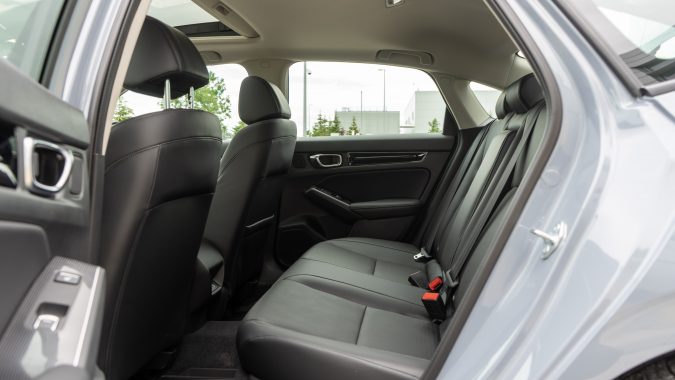 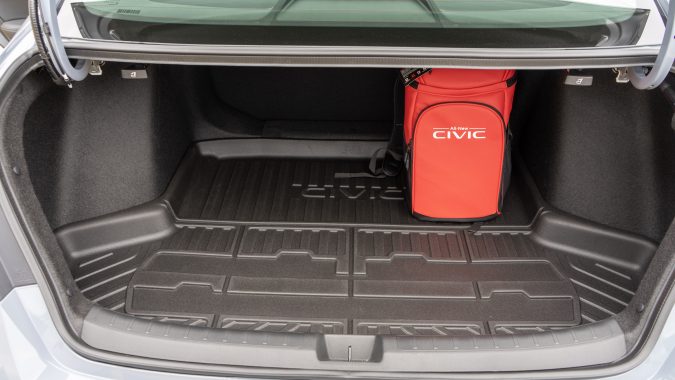