A bigger and better bang

ATHENS – Despite the nature of the subject I am about to discuss, make no mistake, the future of the auto industry is electric.

And it’s a revolution already in progress, as automakers continue to announce plans for new electrified models and issue end dates for production of cars with internal combustion engines.

At the forefront of the shift towards electrification is Audi, the premium automaker based in Ingolstadt, Germany, which confirmed earlier this year that it’s final new gas and diesel-powered models will be introduced by 2026 and phased out by 2033.

In other words, the end of the line for glorious rip-snorters like the all-new 2022 RS 3 isn’t here yet, but the horizon is getting closer.

Thankfully, performance monsters like the RS 3 will be filling Audi showrooms for several more years and, as I recently discovered during my first-ever jaunt to Greece, that is blessed good fortune. 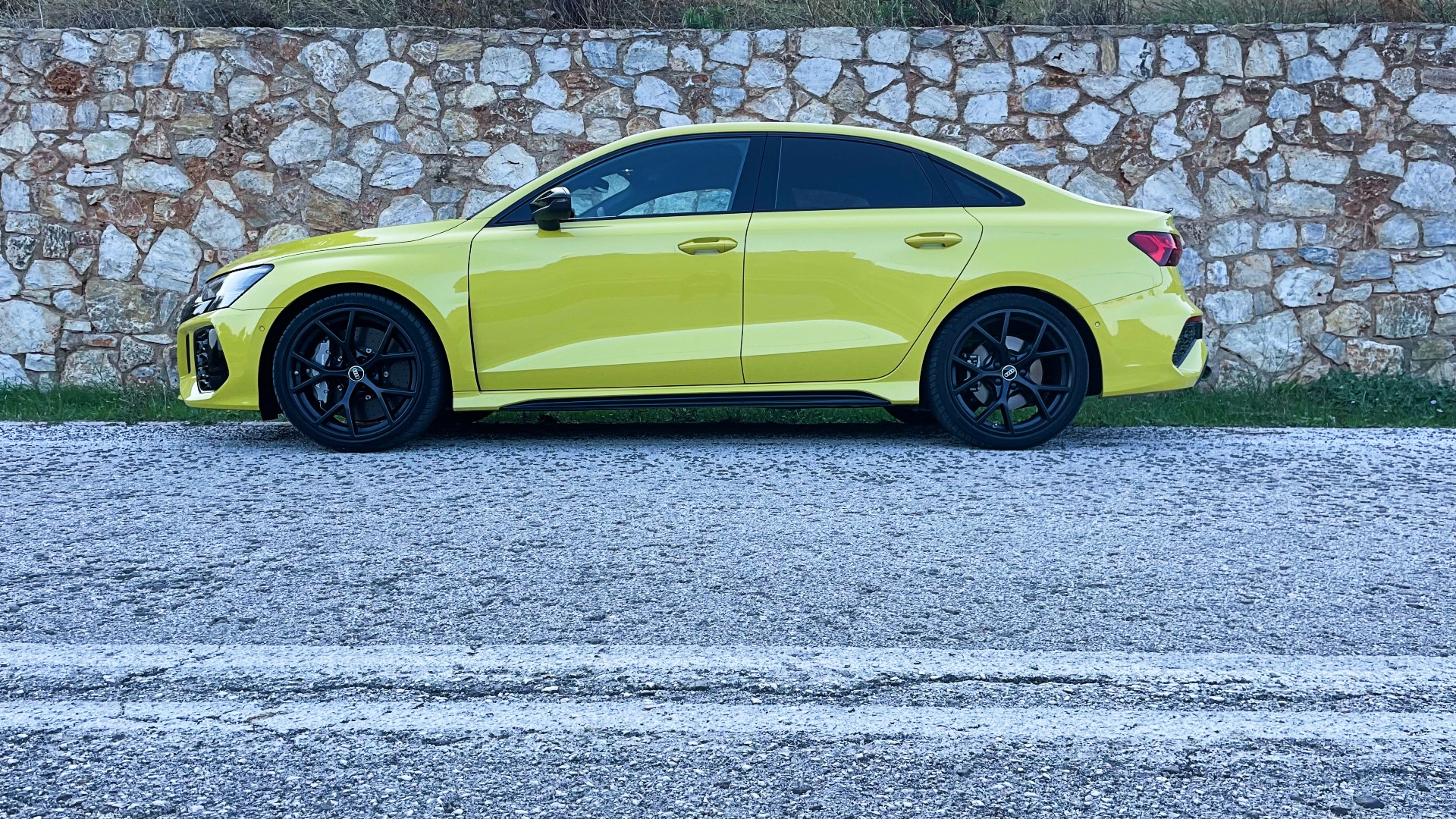 To reset, the A3 family, from which the RS 3 descends, is all-new for 2022 in fourth-generation form. The lineup for North America now consists of sedans only, so for those hoping for an updated A3 Sportback (hatch), you’re out of luck. Fourth gen Sportbacks continue to be sold in Europe and other world markets, however, including the RS 3.

First, what you need to know. For the RS 3, it all starts under the hood. Audi’s vaunted turbocharged inline five-cylinder, a famed powerplant that has burnished the Four Rings’ enviable motorsports tradition with numerous victories and championships, returns with more power. This time around the 2.5-litre five cranks out 400 horsepower and 369 lb-ft of torque, an increase of five hp and 15 lb-ft over the outgoing model. 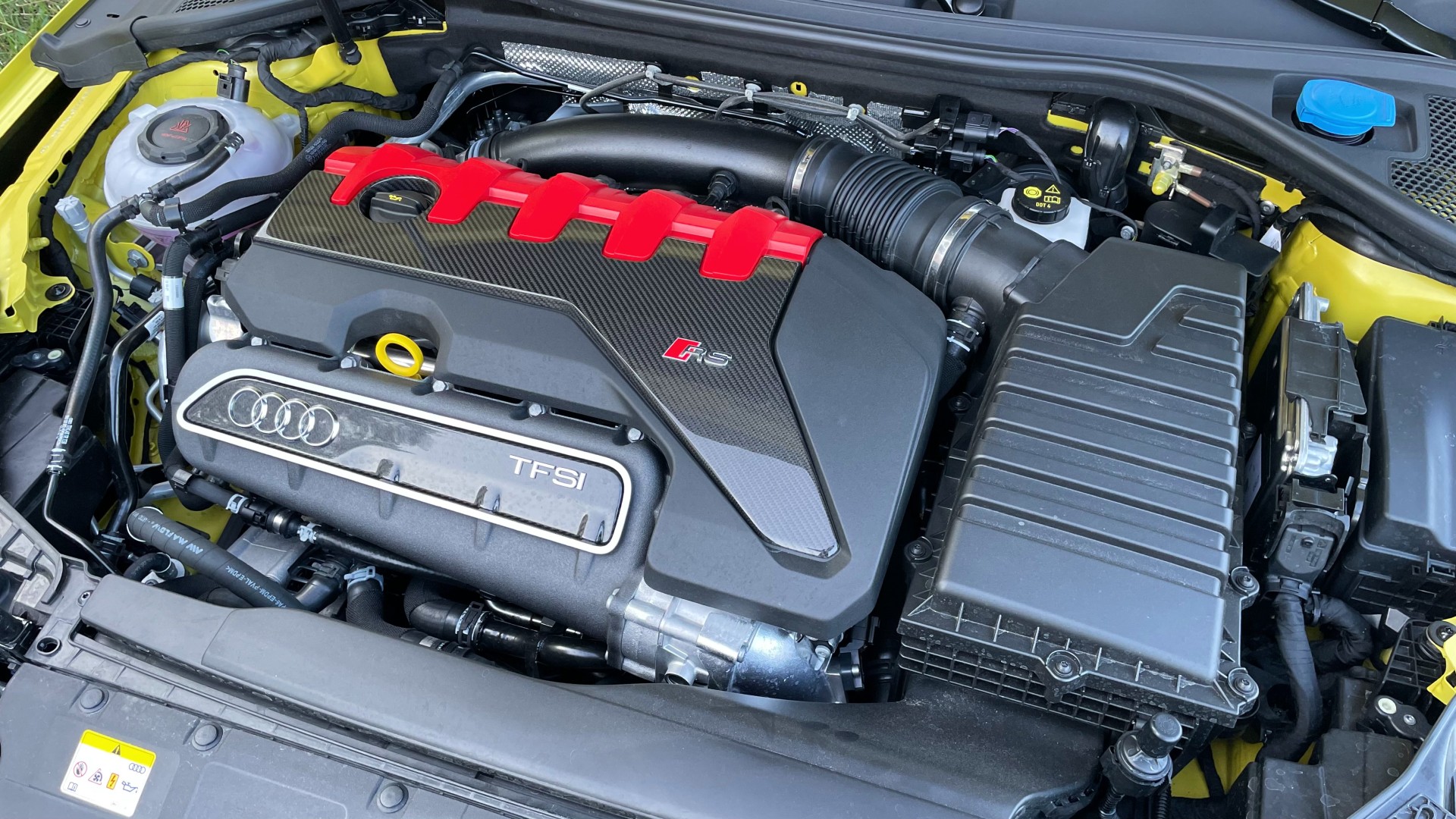 As the name would suggest, the main advantage the RS Torque Splitter offers is variable torque vectoring between the rear wheels to drum out understeer while cornering in dynamic driving situations, such as on a racetrack. The system sends engine torque to the rear wheel under load during cornering (outside right in left-hand turns and outside left in right-hand turns) to help reduce the amount of understeer.

The system can also support what Audi calls ‘controlled drifts’ on track, by sending up to 100 percent of engine torque (1,750 newton metres) to one of the rear wheels. Torque distribution varies depending on drive mode, driving situation and other factors such as steering wheel angle, throttle position, gear selected and yaw angle.

As for chassis set up, the RS 3 rides on a standard sport suspension with new shock absorbers that feature model-specific tuning and active damper control, which continuously adjusts damping based on driving conditions and drive mode setting. The RS 3 also has a larger wheel camber (wheels angled more towards the road) than the A3, for better cornering and more precise steering. The suspension has also been beefed up with modified pivot bearings, stiffer bearings in the lower wishbones and sturdier subframes and stabilizers.

Aesthetically, the RS 3 carries unique bodywork details. The most striking of these, at least to these eyes, are at the front, which features a Singleframe honeycomb grille finished in gloss black. It is flanked on either side by large air intakes and flat, wedge-shaped LED headlights with embedded turn signal indicators. Matrix LEDs are available as an option and feature a start-up animation that spells out RS 3 with a checkered flag at the end.

Elsewhere, the new RS 3 sports a 33 mm wider track for a more planted stance. It also has new air outlets behind the front wheel arches, rocker panels finished in black trim, flared haunches and deep character lines that run along the sides of the car to help create a more emotional and sporting aesthetic. Pirelli Trofeo R semi-slick tires are available from the factory as an option, a first for the RS 3, but our European-spec, early production testers were outfitted with Bridgestone Potenzas. 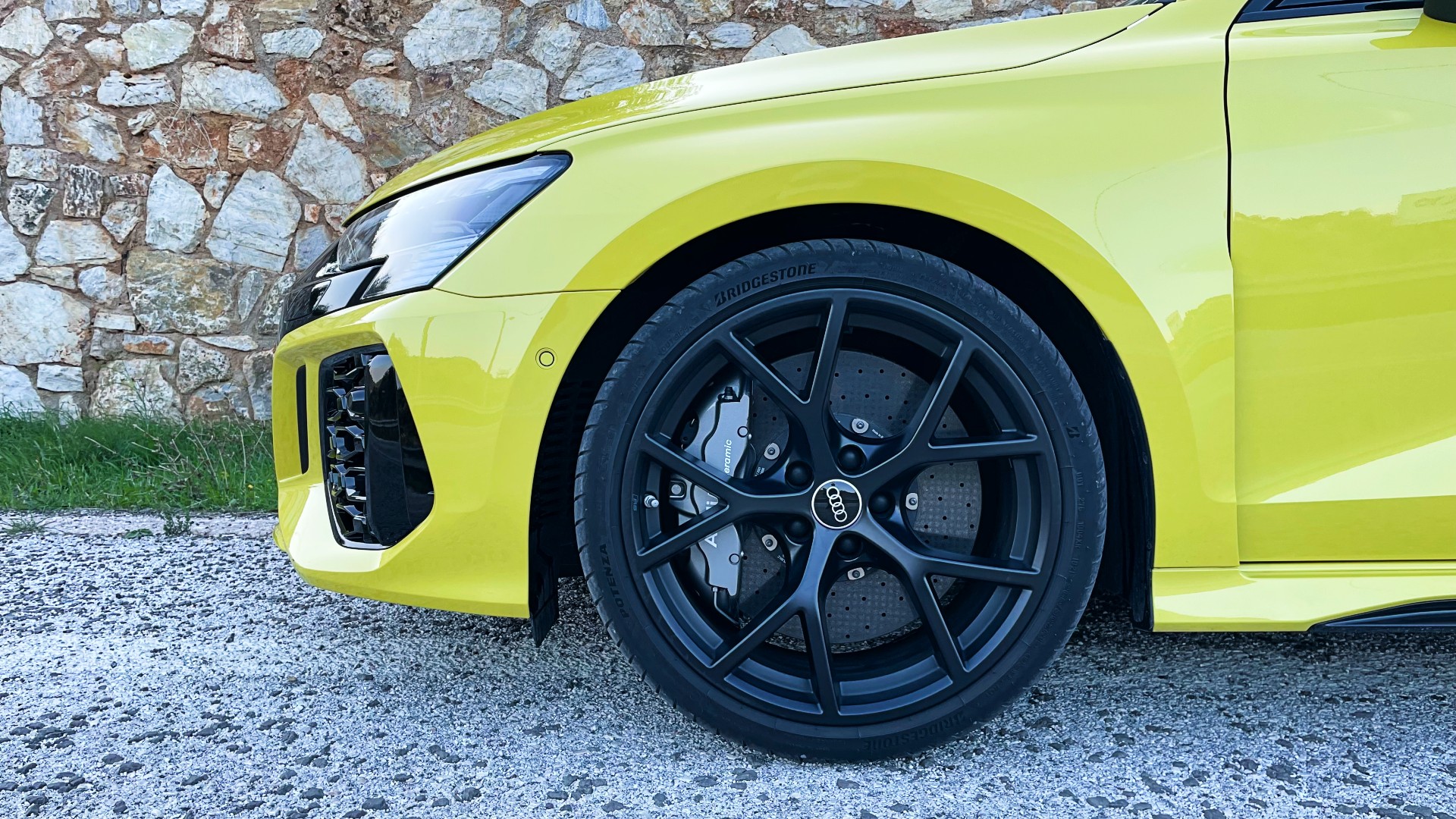 On the inside, the RS 3 offers a functional and handsome, if not dazzling, cabin. Two large screens – a 12.3-inch configurable virtual cockpit plus instrument cluster and a 10.1-inch touchscreen infotainment display – dominate, with other controls and switches within easy reach. The D-shaped steering wheel is small, but thick-rimmed for good road feel and control.

I liked the rows of hard switches located below the touchscreen for items such as climate controls and drive mode selector. Easy to find and use, with minimal distraction – well done.

Overall, my feelings about the new RS 3 are like the ones I had regarding the outgoing model. I loved that car and feel the same about its successor. 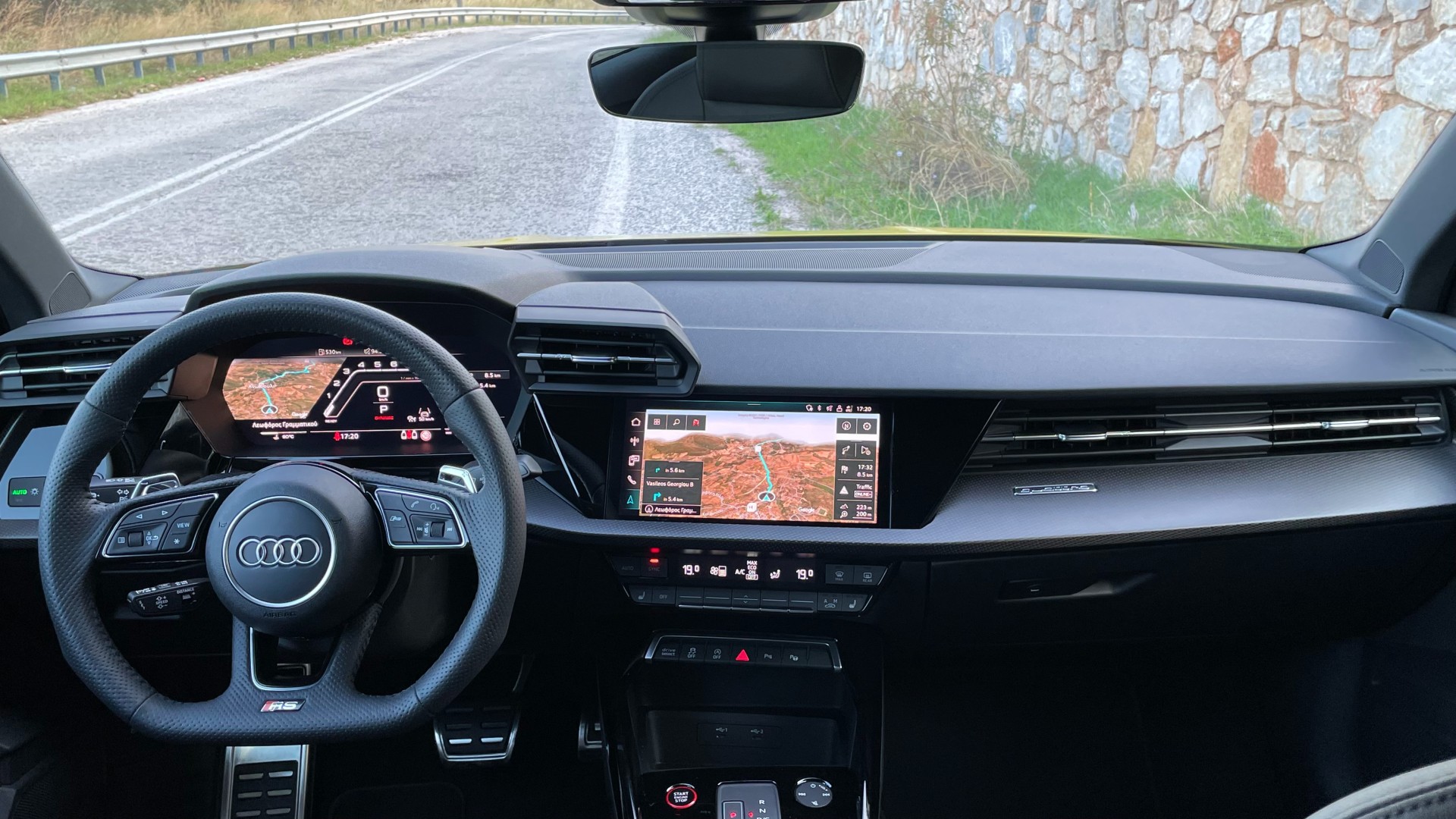 A drive route north of Athens, which lasted for about 90 minutes, took me on some very winding and narrow canyon-style roads with lots of blind corners and hairpin turns. On these roads, which feature rather interesting speed limit fluctuations (common to many European countries), the RS 3 is a blast to drive. Whether in manual mode or regular drive, the turbo five-cylinder exhaust note (which is variable), provides a pleasing background soundtrack, as it hustles the RS 3 up and down over hill and dale with both speed and precision.

I toggled back and forth between manual mode and regular drive, with the transmission in sport and normal, and through different drive modes: comfort, auto, dynamic and efficiency. Regardless of setting, the RS 3 is fast, with sharp and responsive handling, and steering that offers excellent feedback that produces a very engaging and dynamic driving experience.

On track at Athens Megara Circuit, a flat 2.1 km road course, I sampled both dynamic and RS Performance modes, where the RS 3 really showed its hand as a track-worthy car. RS Performance is a track-specific mode and further sharpens the car’s reflexes.

It also dials back intervention from electronic nannies such as stability / traction control, which allows the car’s rear end to move around some during cornering, which I could really feel in dynamic mode. However, when our instructor, Audi development driver / professional racing driver Frank Stippler, told us to switch to RS Performance mode for our second lead-follow exercise, the RS 3’s handling tightened up significantly, with much less understeer and oversteer than when it was in dynamic mode. The RS Torque Splitter earns its keep!

I’m not a professional by any means, but the RS 3 likes to be pushed hard on track, and I wrung as much out of it as my skill allowed, to the point that I tripped the pre-sense collision detector on a couple of corners, as I was braking late to catch up with the car in front. Speaking of brakes (which were cooking on my tester when I stepped out), carbon ceramics are available as an option, and were outfitted on our test cars. 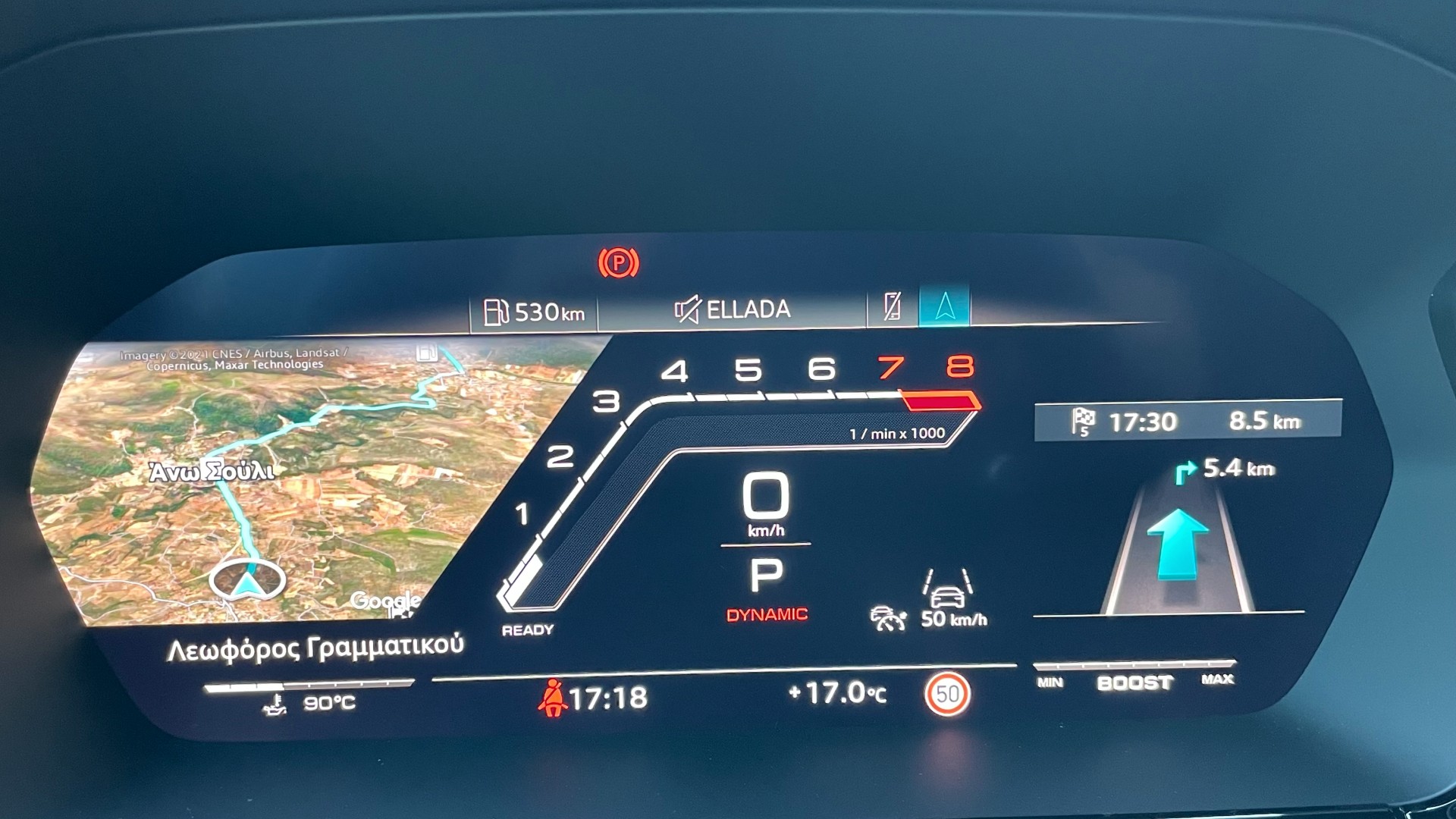 There’s really very little to gripe about with the RS 3 – Audi has really nailed it here. One thing I didn’t love, however, was the lack of side bolstering in the driver’s seat, which was quite comfortable otherwise. But I slid around a little too much during our lapping exercise. The dash could also use some jazzing up and a bit more colour.

These are minor nitpicks, however, for what I believe is a great car. The RS 3 looks great, it’s fast and has loads of advanced technology. For tracking and dynamic driving in general, the RS Torque Splitter is a significant advancement that offers big handling gains. 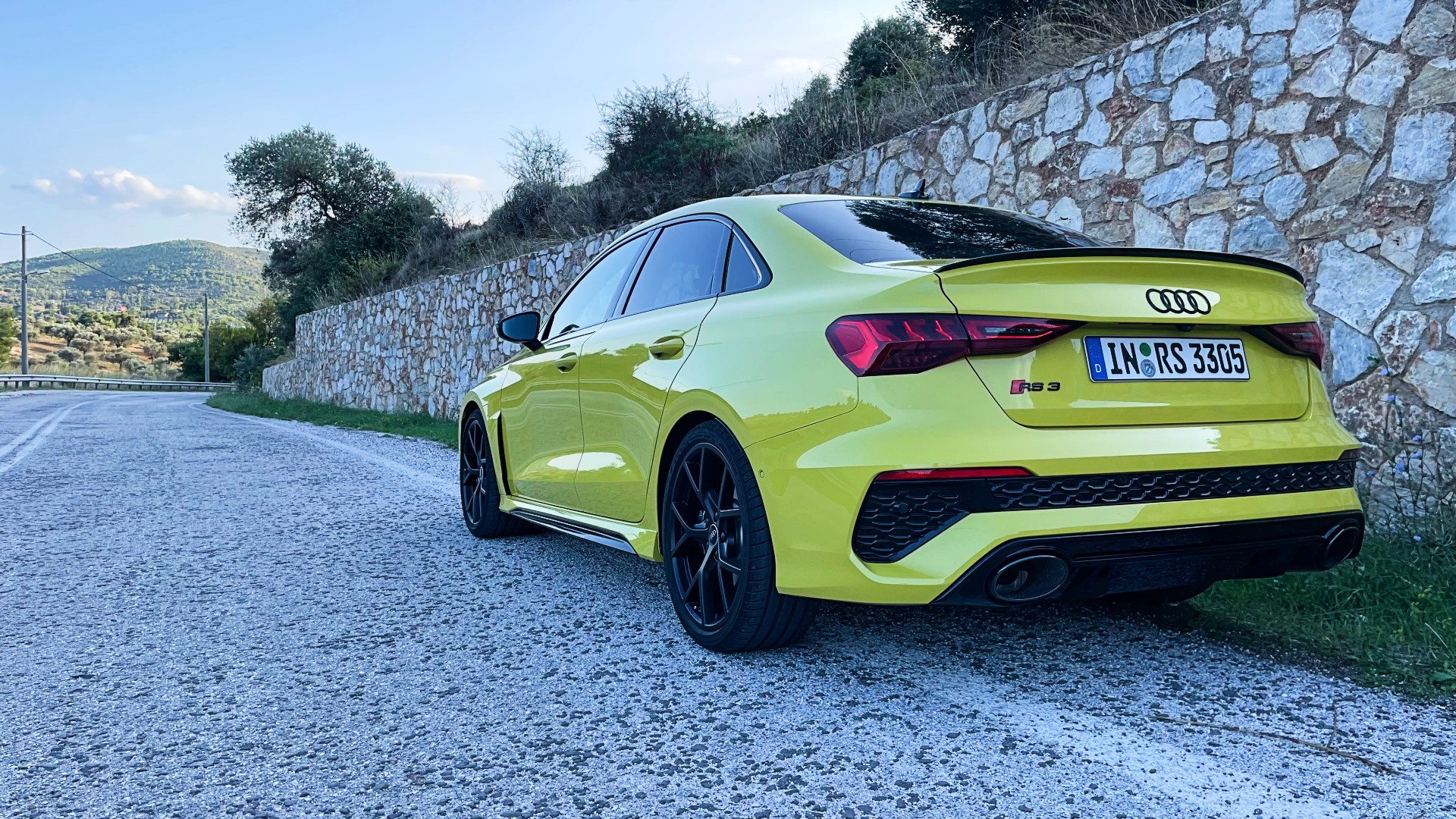 As I said at the outset, the end of internal combustion engines is advancing, but if the RS 3 is a sign of things to come in the near term from Audi, these gas-powered models are going to go out with the biggest bang.

The 2022 Audi RS 3 will go on sale across Canada in the first half of next year. Pricing and NRCAN fuel consumption ratings will be released closer to on-sale. 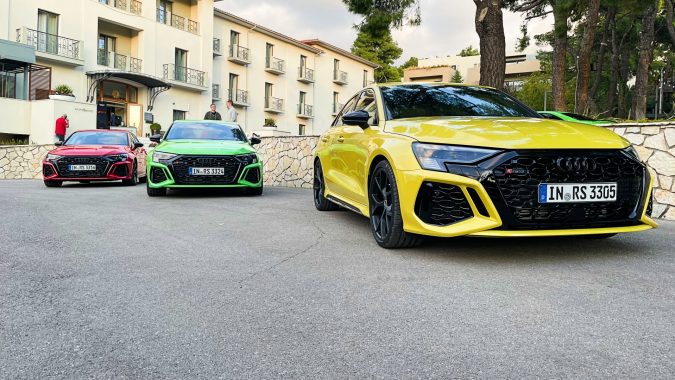 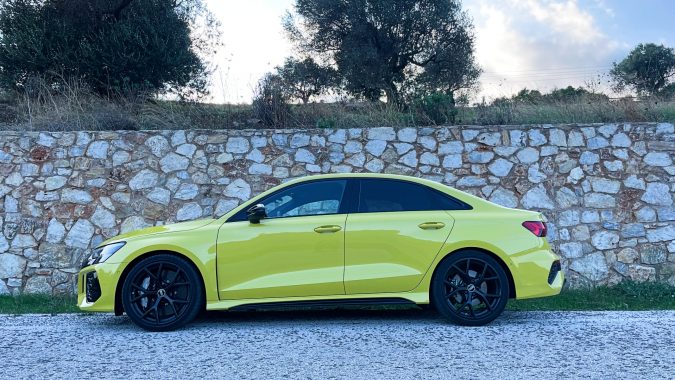 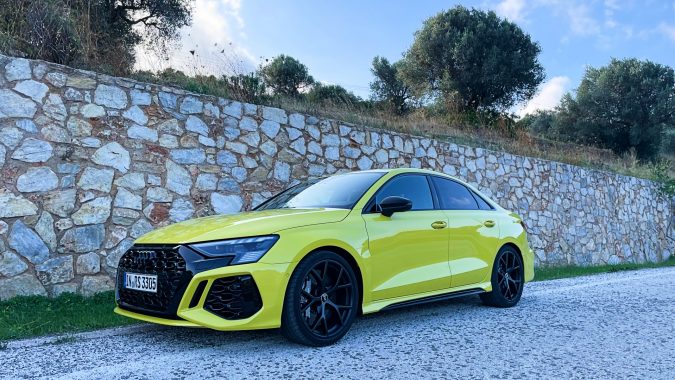 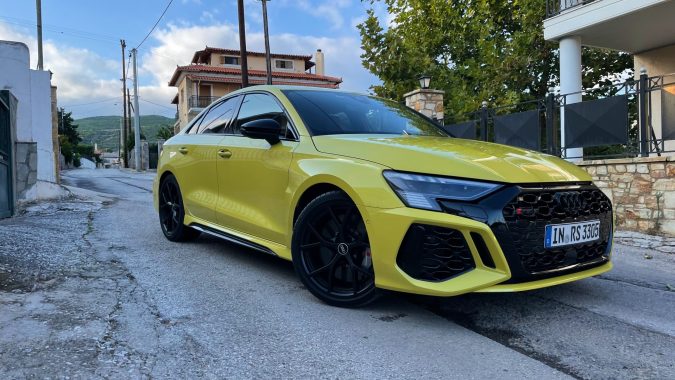 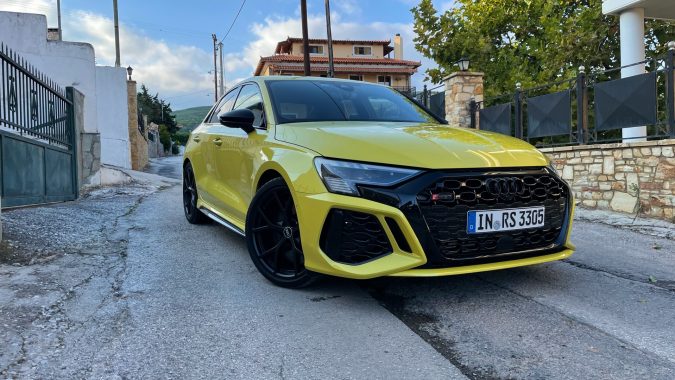 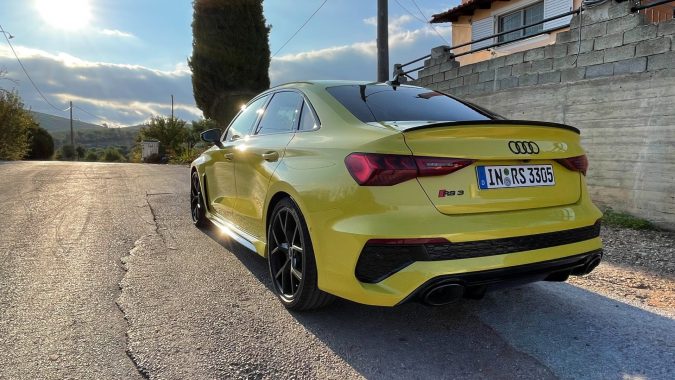 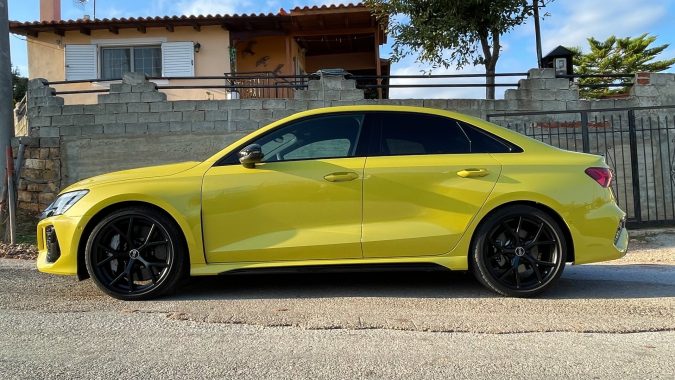 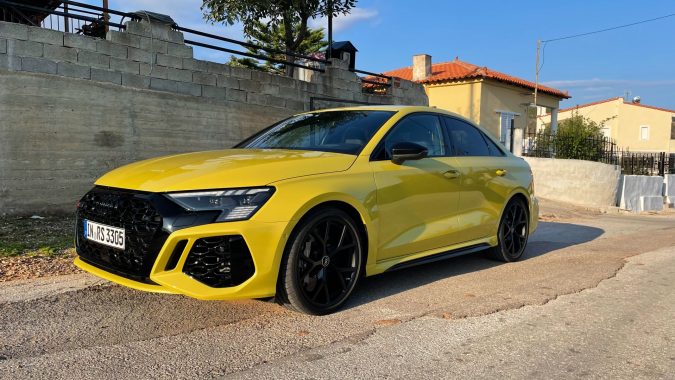 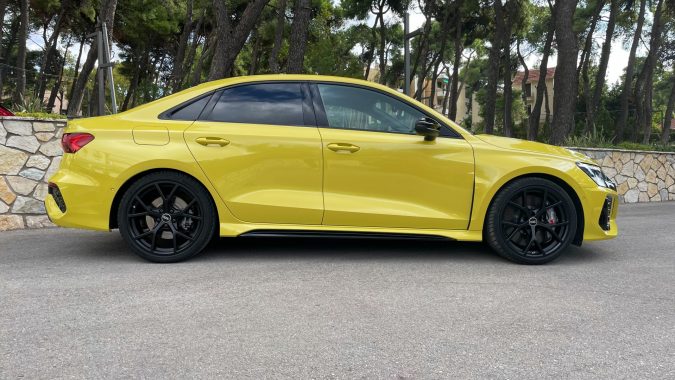 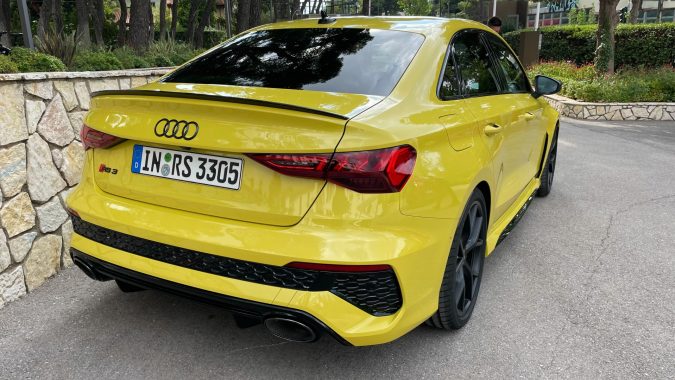 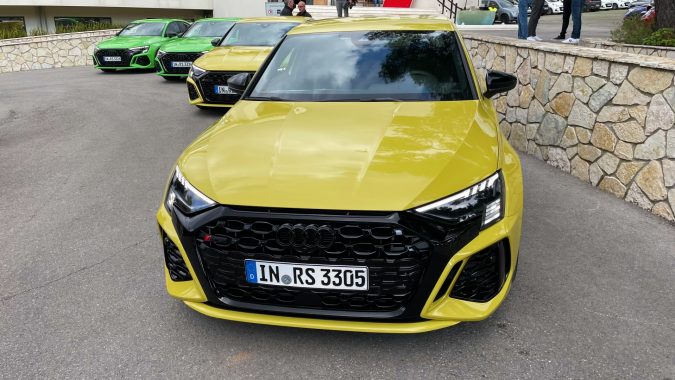 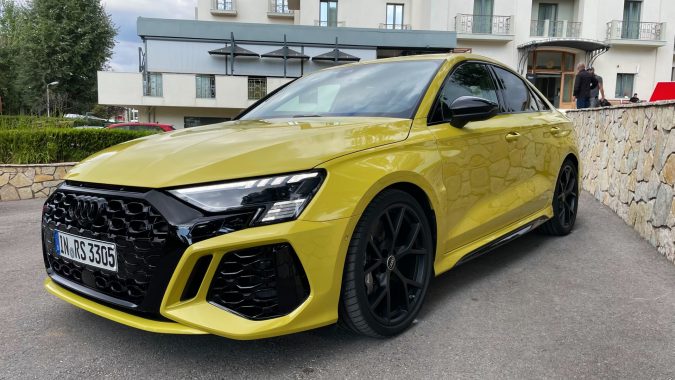