Mitsubishi's new Eclipse Cross resurrects one of their most popular name plates, except this time it's a crossover and not the pocket rocket that we remember.

Collingwood, Ontario: Is the Eclipse Cross the paradigm shift of the year? Well, that’s probably a long shot, what with the NHL being led by a team from a town in the middle of the desert that’s never really hosted a pro team, and Angelina Jolie seemingly getting ready for a life in politics.

After all: it’s not every year that you see a model name long associated with sports cars (and Hollywood) transition to a crossover coupe, the type of which recalls vehicles such as the BMW X4 or Mercedes-Benz GLC Coupe. I suppose you could throw the Subaru Crosstrek in there for good measure, but the luxury manufacturers were the originators in North America of the hatch-cum-coupe-on-stilts thing. So it goes that Mitsubishi looks to capitalize on the reasonable success they’ve had on the SUV/CUV front by slapping one of their most well-known nameplates on one.

It also seems to be an effort to help people get over the loss of the Lancer Sportback – the rooflines of it and the Eclipse Cross (base MSRP: $27,798; SE, $29,998; SE Tech Package, $31,998; GT, $35,998) are somewhat similar – which may have been well-loved by those that loved them, but not enough to make people leave their crossover comfort zones in favour of a low-riding, AWD hatch. Their loss, we say, but maybe this new vehicle will do as Mitsubishi intends, and help fill that void. The Eclipse Cross’ standard AWD and 1.5L turbo good for 152 hp and 184 lb-ft helps in this regard. The CVT auto—your only choice—does not. But more on that in a minute. 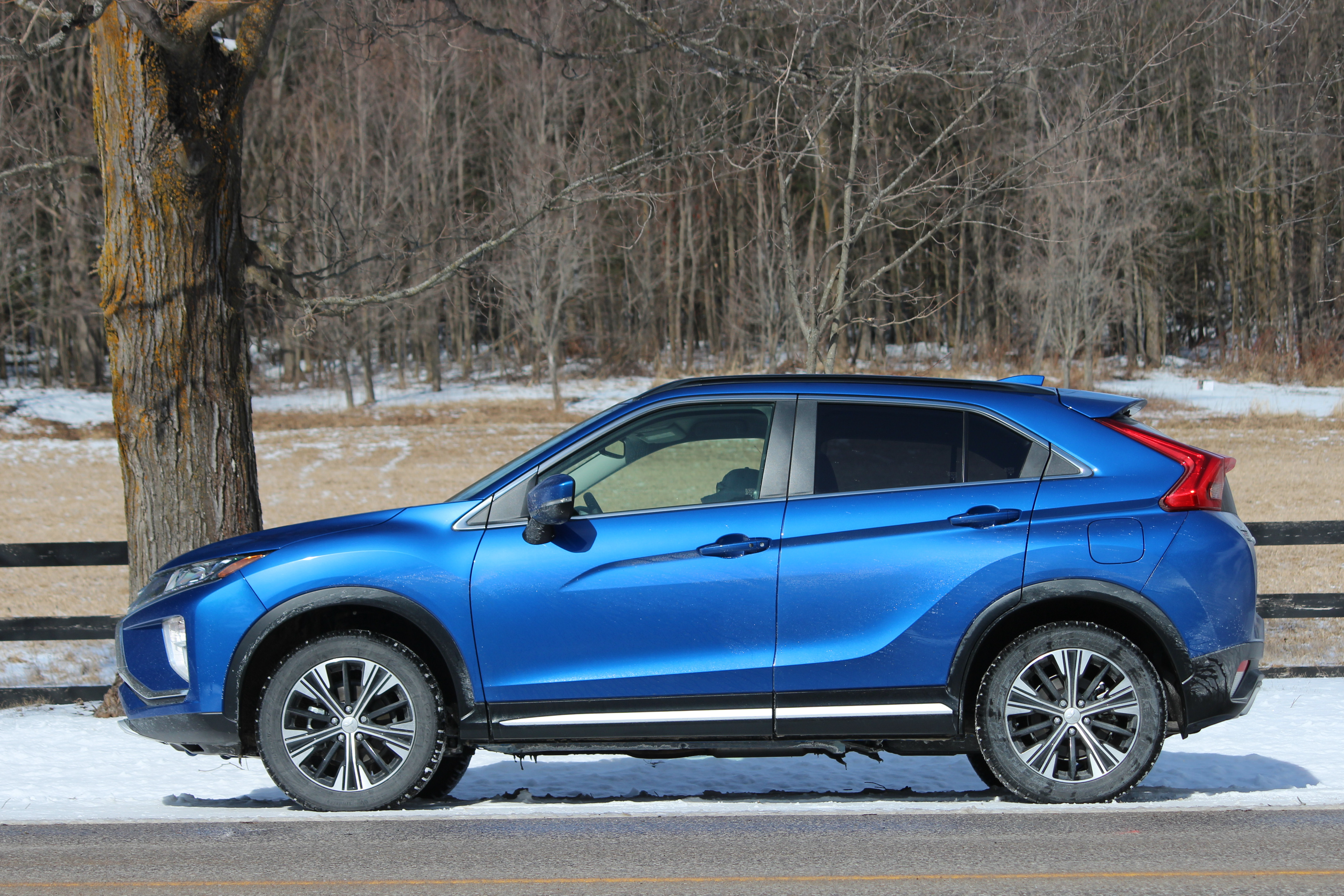 If you were to just show the body silhouette without its wheels – or better yet, if you were to see it in broad daylight, sitting on the ground sans axles – you’d have a hard time believing it was anything but a hatchback. Aggressive front and rear window rake, roof spoiler, deep front splitter, canted-forward stance (Mitsubishi says it turned to the “get set” position used by competitive sprinters for inspiration)  and almost zilch in the way of front and rear overhangs all point to the Eclipse Cross being a sport hatch, and as a result, all that much closer to the sports car it replaces.

Of course, once you do add those axles (equipped with 18” two-tone wheels as standard), that all changes. That’s 215 mm of ground clearance you’re seeing, enough to propel the Eclipse Cross over all manner of terrain. American markets get the choice of FWD or AWD, but after sampling Mitsubishi’s Super All-Wheel Control (S-AWC) tech, I find it hard to believe that any Canadians will miss the FWD option.

Put simply, S-AWC remains one of the best AWD systems on the market, thanks to its being able to divide the torque between all four wheels if need be, and up to 80% to the front or rear when the situation requires it. Active stability control, yaw control and ABS are all used to help ensure that the Eclipse Cross stays planted, whether on the straight and narrow, through the bends, or on loose terrain (the three drive modes include Auto, Snow and Gravel, selected via a button marked “S-AWC” mounted above the shifter). There’s no mechanical diff as seen in gas Outlander models, but Mitsubishi says the weight saved is a boon for the Eclipse, which will always maintain a more sporting bent. Plus, buyers are likely going to be plenty happy with the performance the Eclipse’s e-diff and torque vectoring provides. Not to mention that the e-diff is faster acting than a mechanical diff.

Zipping from A to B, properly comfortably 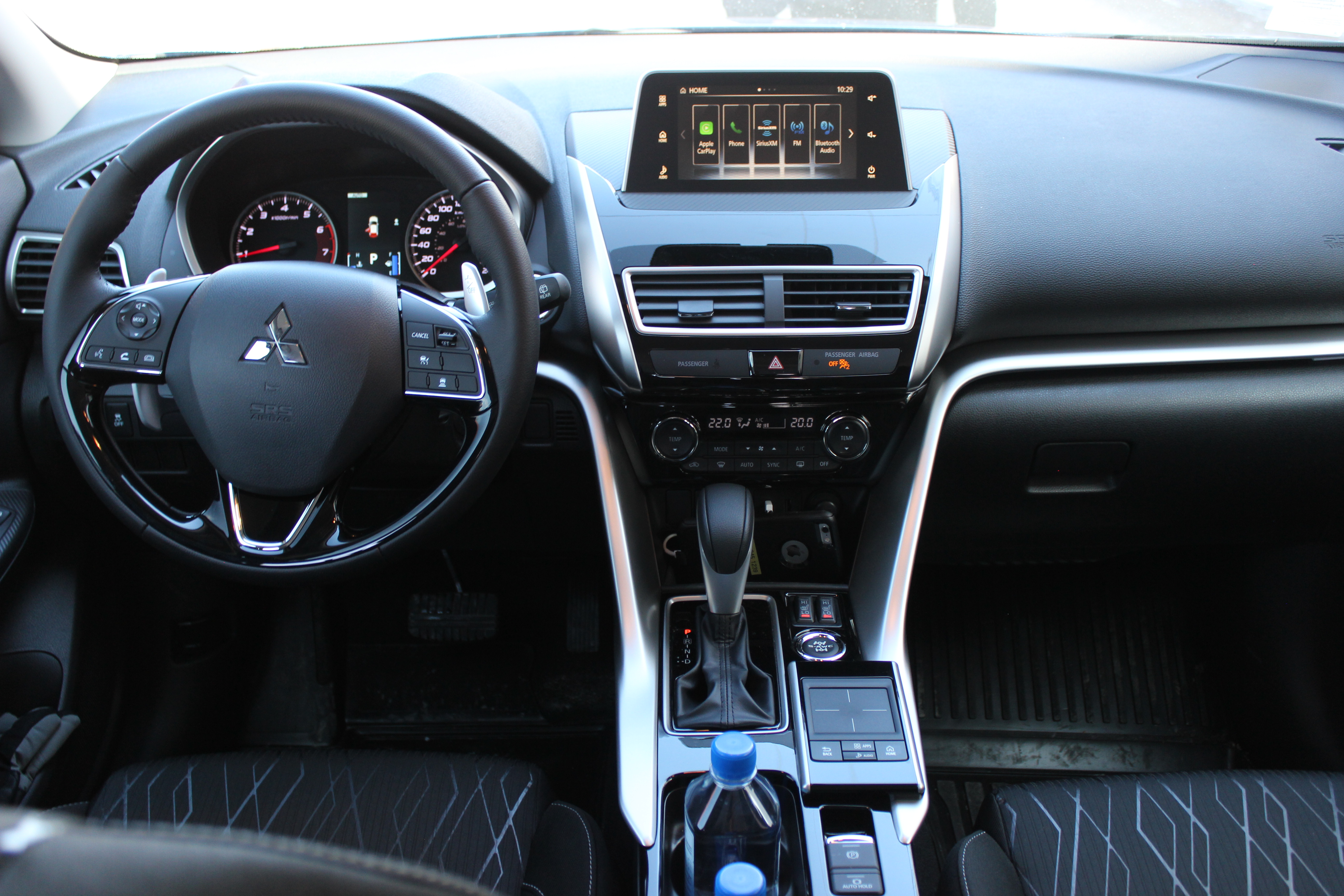 The quick-acting diff, it should be said, works as advertised; we were driving in some unseasonably slick and snowy conditions, and the Eclipse was unphased as power was transferred from side to side to quickly right any wrongs committed by overly zealous throttle applications or panicked steering inputs. This was nice to know as we navigated the decreasing-radius corners that were peppered throughout our drive through the hilly, woody enclaves just outside of Collingwood, ON.

One particularly memorable moment had me stabbing a little too hard on the throttle during a right-turn at an intersection, which was magnified by the fact that half our wheels were on a slippery, snowy shoulder. Before I even had a chance to apply any corrective lock, the S-AWC system stepped in and righted the ship. Excellent, and a tantalizing taste of what the Eclipse Cross can do in even more adverse conditions.

If I’d had the chance to grab an armful of lock there, though, it would have been met with immediacy from the chassis; the steering is fantastically direct, and while its EPAS-ness means it’s a little down on feel, the fact it’s so responsive more than makes up for that. This is one sporty-feeling rack that does well to walk the walk displayed by that forward-leaning stance.

For all its athleticism, though, I’m happy to report that it doesn’t feel so firmly sprung as to deter it from everyday, broken concrete work; thanks to the use of all sorts of high and ultra-high tensile steel in the body’s key areas, there’s very little cowl shake or shuddering as you tackle the pockmarks.

The ride, in turn, is backed up by a nicely roomy interior that doesn’t feel as tightly confined as the taut body panels suggest. The front seats are supportive and deep, and the rears, though a little flat, roomy enough that I didn’t clang my cranium, even with the optional dual-panel sunroof. Yes; you’ll have to duck a little upon entering, but such is the burden with the aggressive roofline.

The cabin comfort is almost all good, but it should be noted that I encountered a little more wind noise than I would have liked, especially in that notorious spot between the wing mirror and A-pillar. Our drive was calm and bereft of wind, but on a few occasions, I wasn’t so sure. It’s a bit of a shame, but I’d say it’s forgivable thanks to just how good everything else is inside.

Plus, you can always turn to the all-new infotainment system to help drown out the drone. All Eclipses come with a 7” touchscreen display mounted atop the dash that can also be controlled via a touchpad mounted just right of the shifter. Two fingers swiping horizontally changes the menu, while a single finger changes the selection within the menu. Sat radio, Bluetooth, Apple Carplay and Android Auto are standard, but be warned: the touchpad doesn’t work with Android Auto, which Mitsubishi says is the fault of that system, not theirs. It’s also an all-touch affair; there are no volume or seek knobs, though the climate control system makes use of traditional buttons. You’ll also need CarPlay/Android Auto if you want GPS, because that’s the only way you can get it in the Eclipse.

As far as displays go, a head-up display joins the main unit on the top GT trim, displayed on its own micro screen as opposed to on the windshield ahead. Mitsu says that not only makes it easier to read, but it’s also less expensive since a reflective coating on the windshield isn’t required. Your speed, electronic driver aid data and more is displayed there, and it’s height-adjustable via a button mounted to the left of the wheel. That’s all well and good, but taller drivers may have an issue as the lowest I could get it to go still chopped off the top of the speed display, forcing me to slouch more in my seat.

Joining the entertainment features are a host of electronic driver aids, including a rear view cam and cruise control at base, BLIS and rear cross-traffic alert one up from that, on to forward collision warning and mitigation, lane departure warning and adaptive cruise once you get to the second-from-top SE Tech package. All the top GT trim adds safety-wise is a multi-view camera system and HUD.

A quick note on the styling: in profile and from the front three-quarter view, the Eclipse Cross is bang-on, all taut and muscular and ready to rock. The rear three-quarter is where things start to go a little sideways; the dual rear-window does provide a better view out (but a backup camera is standard, so there’s that), but it makes for an awkward intersection of lines that I have to say reminded me chiefly of the Pontiac Aztec. Which, cult classic as it has now become, is not fondly remembered for its styling. As a result, the Eclipse Cross gets a solid 75% in the styling department; a less awkward rear end, and this here may be the best looker in the segment. I do like how they’ve tucked the rear wiper up under the spoiler; it serves the dual effect of keeping a clean look and keeping the wiper itself clean from snow.

The two-tier tailgate also makes it easier to load taller items, helping make better use of the Eclipse Cross’ 640 L of storage behind the rear seats. That’s without the sunroof and optional hi-fi Rockford Fosgate sound system’s subwoofer, and 626 L if you add those two items. Drop the rear seats by flipping a lever on each seat’s shoulder and you’re treated to 1,385/1,382 L.

Turbo to the core, but… 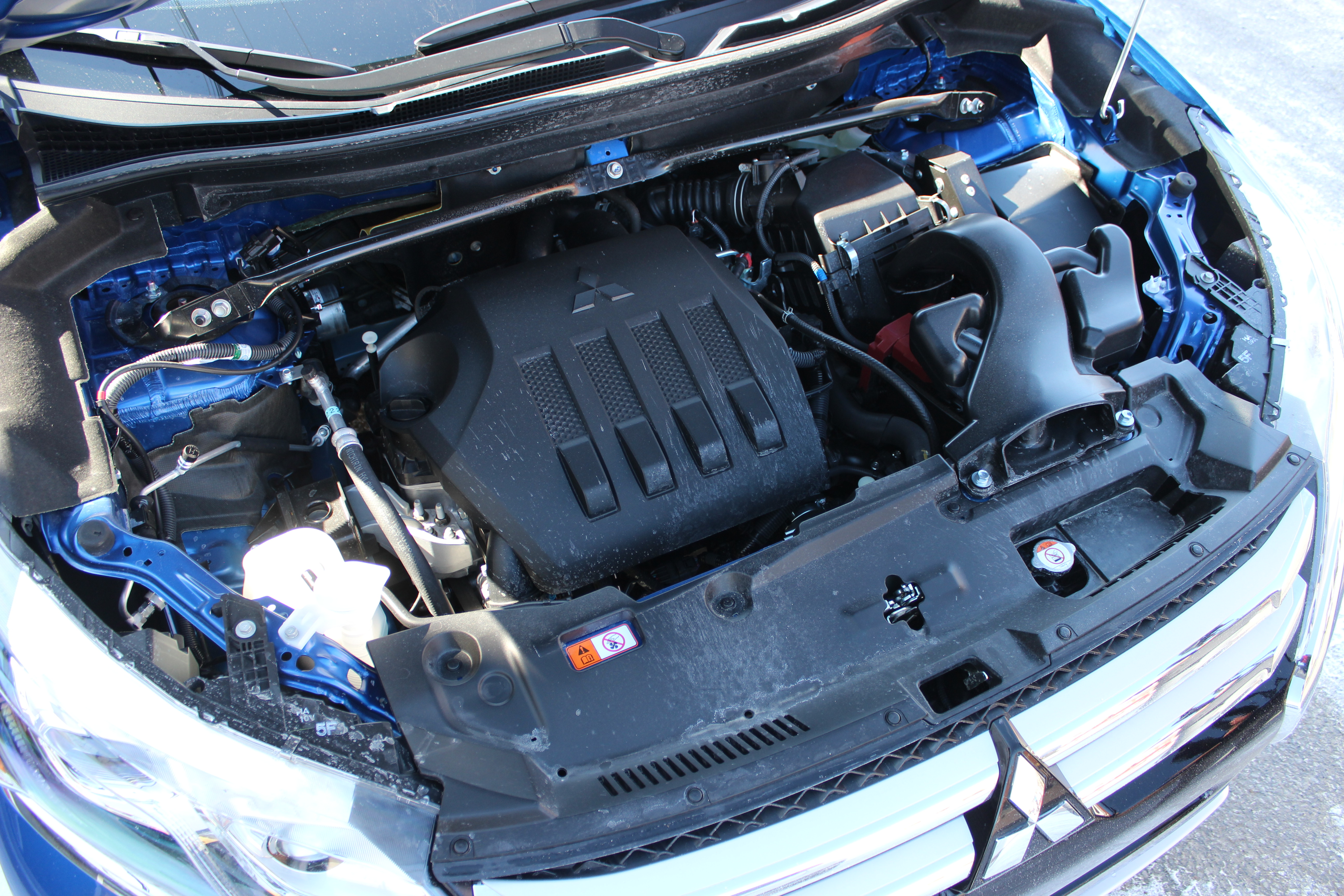 As mentioned before, every Eclipse Cross sold comes with a turbocharged 1.5 L four-cylinder under the hood. It’s a nicely peppy unit that had me surprised on a few occasions – such as the intersection event mentioned earlier – with its delivery and willingness to get that power down. It may be smaller than much of its competition, but in most situations, I wasn’t too bothered.

Climbing steep, long grades is a different story, however, as this is where you start to sense the Eclipse Cross struggle a little. Now, the smallish ‘plant will shoulder some of the blame, but I reserve most of that for the CVT transmission. CVTs are notorious for the way they can restrict power delivery and it’s no different here. You have to really drop the hammer to get it to loosen its grip and when it does, it does so in a loud and somewhat droning manner. Mitsu has been in the CVT biz for a decade, so I was expecting better.

There are a set of column-mounted paddles that come as standard on the SE-AWC trim and up (that’s second from the bottom) which, when activated, give way to a “stepped” system that makes it feel like you’re actually shifting gears. They’re nice to have as they help reduce the CVT’s impact, will Eclipse drivers actually use them?

Maybe, maybe not but they will most definitely be using the cash savings they get over the Eclipse Cross’ similarly-equipped competition, which Mitsubishi claims ranges from the Hyundai Tucson to the Mazda CX-5. And, considering that Mistusbishi’s research shows that Millennials make up 52% of new car buyers, those savings will be even more important. Ditto Mitsu’s 10-10-10 warranty (10-year powertrain, 10-year bumper-to-bumper, 10-year roadside assistance); when you’re buying a car at a young age, it’s nice to know that you’re covered for a good long while afterwards. That will be a big selling point, awkward rear end or not.

Will those with fond memories of the Eclipse sports cars be swayed, though, by this entirely new version? I guess time will tell, but they’re going to have to be ready to make some concessions if so, especially around the subject of the transmission. They’ll like the turbo power and AWD, though; if you remember, the original Eclipse sports car had AWD.

The 2018 Mitsubishi Eclipse Cross should be in dealers by the time you read this. 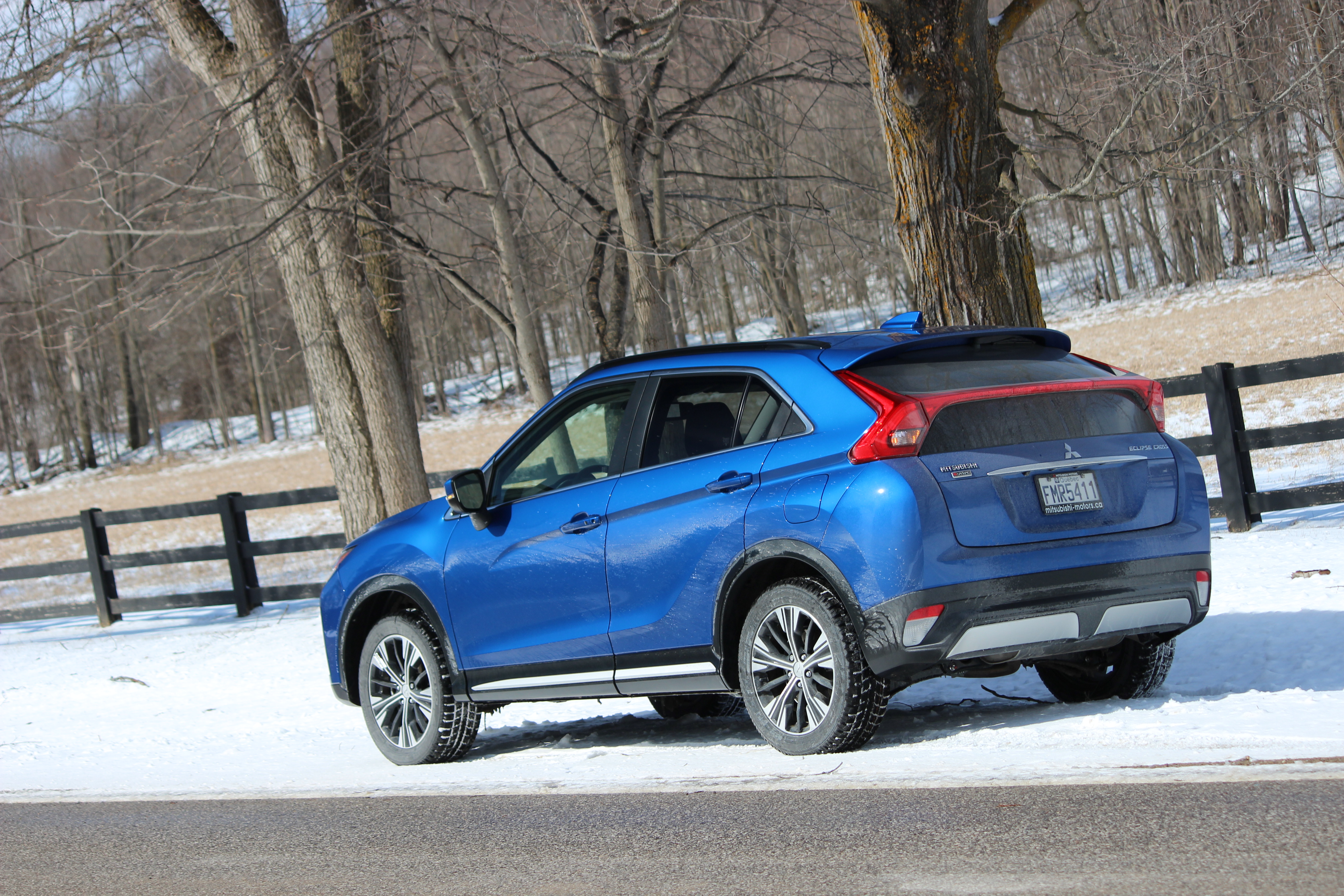 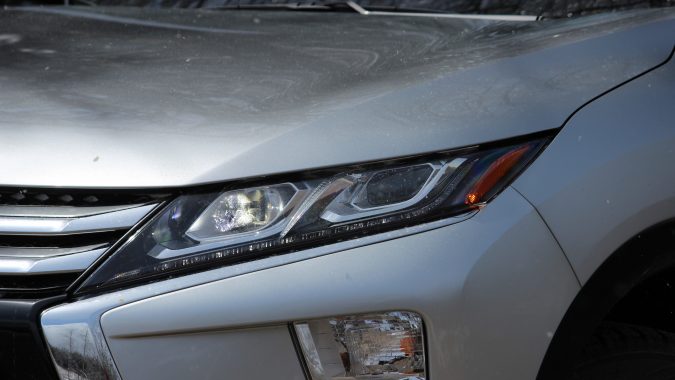 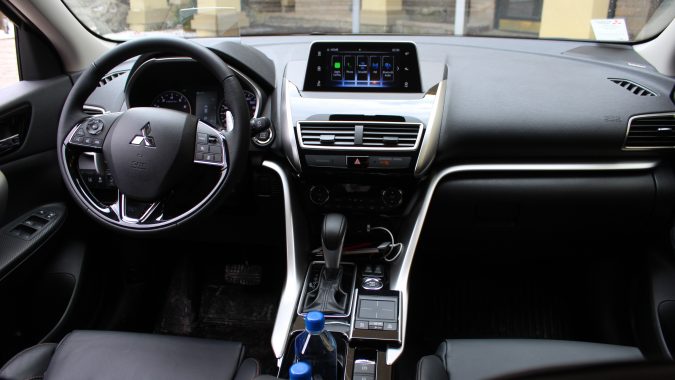 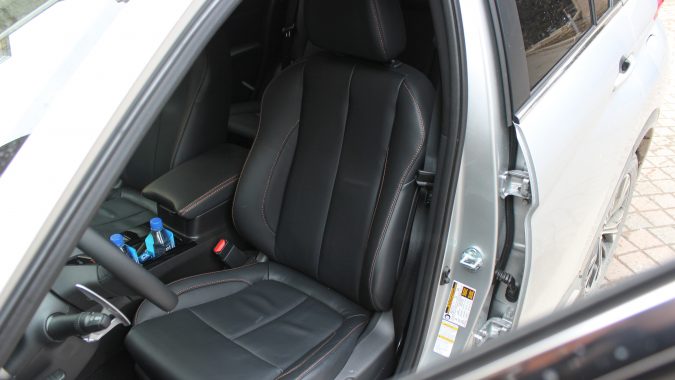 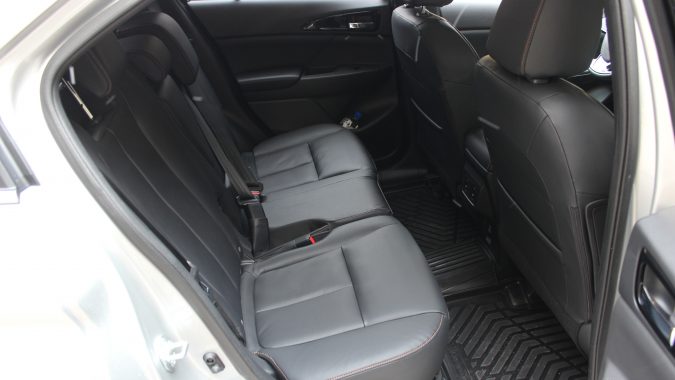 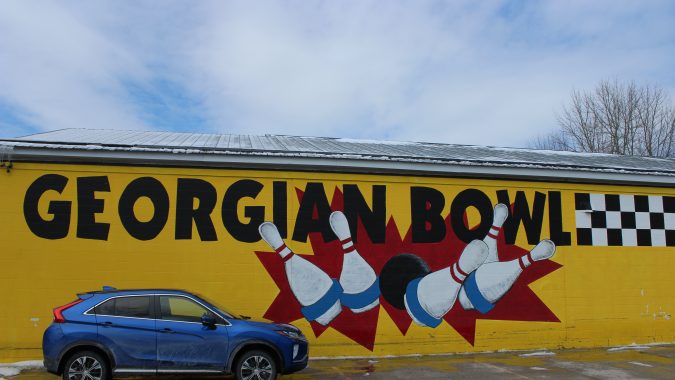 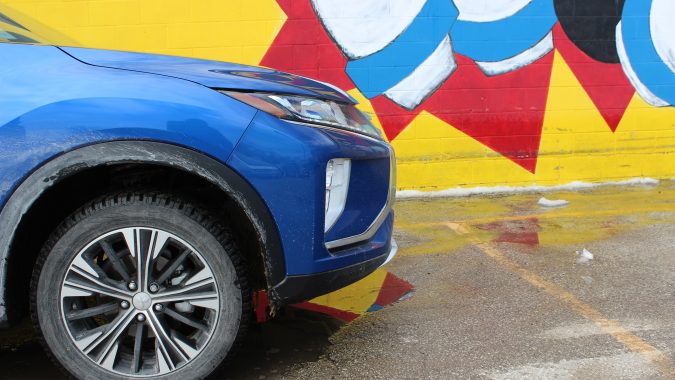 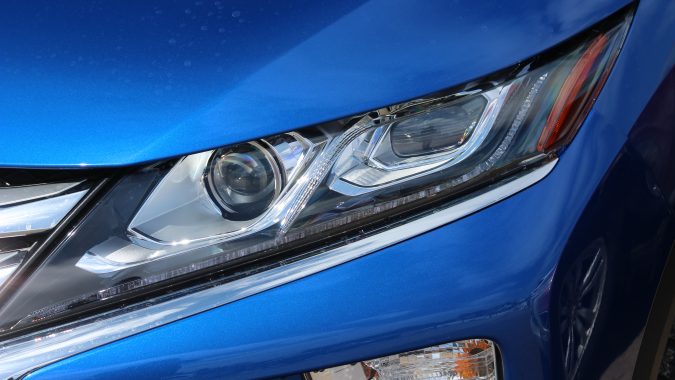 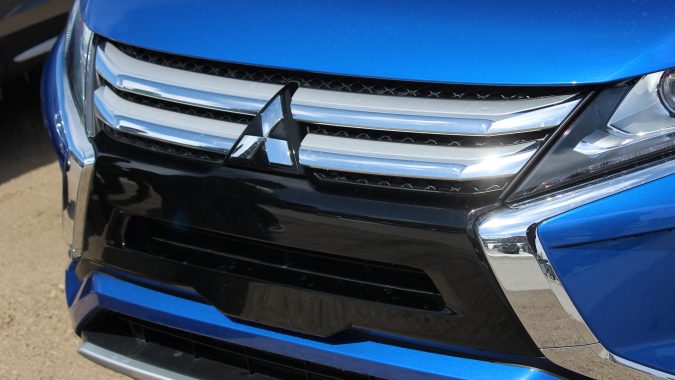 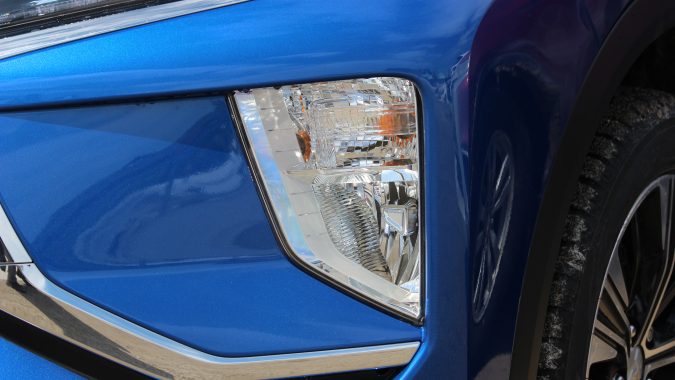 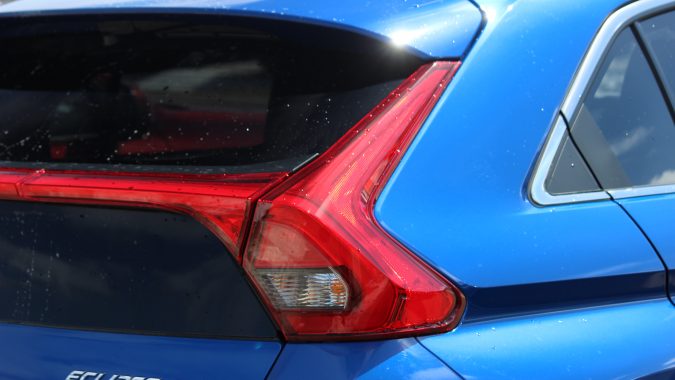 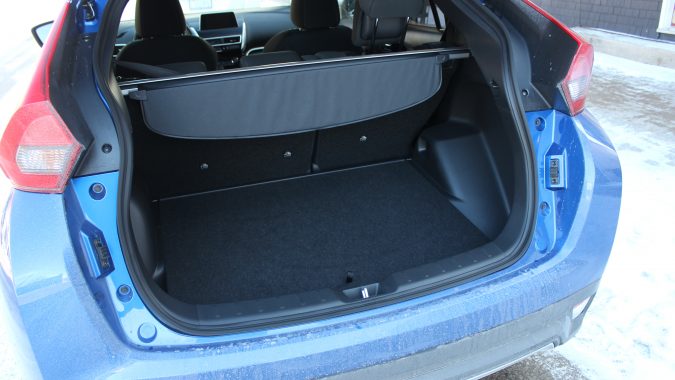 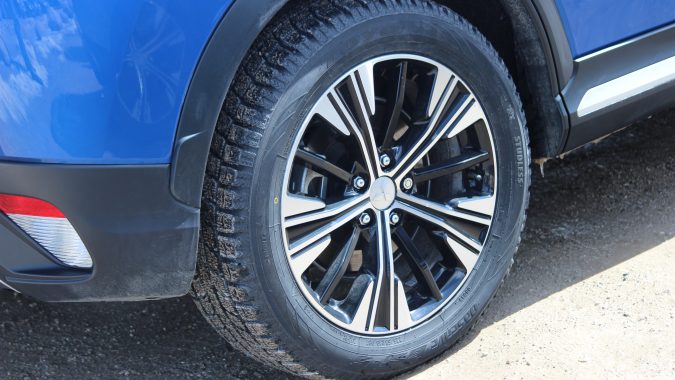