A lineup of some of the 32 different vehicles, representing 17 Fiat Chrysler Automobiles (FCA) models that are available with either AWD or 4WD systems, ready for testing at the winter track facilities of ICAR.

Man, it’s been a long two months since Christmas. With another two months of winter probably yet to come.

So the last thing I needed was that danged Jingle Bells earworm looping through my brain, over and over again.

But it couldn’t be helped, I guess, because “dashing through the snow” pretty much summed up what I was doing.

Hmmm, I wondered. Maybe flicking on the siren would help.

A yelping wail shrieked forth, overwhelming the snarl of the V8 at full throttle. I flipped on the flashing police lights for the full effect and peered through the windshield, trying to fixate on the perp’s waggling tail lights as they shimmered briefly in and out of the shifting whiteouts of blowing snow.

I hammered the go-pedal, the car fishtailing briefly, and the all-wheel drive system recovering nicely, acceleration pushing me deep into the seat. I was steadily gaining ground in the chase.

Umm, maybe I should clarify. The perp wasn’t really a perp, just a guy in a car ahead of me.

And while I was in a 2015 Dodge Charger Pursuit police model, it wasn’t really a pursuit, per say.

It was actually part of a winter drive program hosted by FCA Canada (Fiat Chrysler Automobiles) at ICAR just north of Montreal, on the grounds of the Mirabel Airport.

The ICAR facilities normally include an ASN/FIA-approved racetrack, a 1/4 mile drag strip, a drift park and a 1 km kart track, but under the current snow load they had carved out a skid pad, slalom course, a snow- and ice-covered road course and a challenging off-road trail.

The Chrysler guys (and, yes, the FCA name will take some getting used to) were hoping to use these different surfaces to demonstrate the wide variety of all-wheel-drive (AWD) and four-wheel-drive (4WD) systems available throughout the lineup.

The company engineers tried to help us brush up on our rudimentary understanding of more than 20 different drive systems covering the wide variety of cars, trucks, CUVs and SUVs. There were limited-  slip differentials and transfer cases to consider. Wet clutches and crawl ratios.

But, the trouble was, they then threw something shiny with lights and a siren into the equation and scientific testing and methodology got left behind in a cloud of dust, or in this case, in a cloud of blowing snow.

But the Brampton-built 2015 Dodge Charger Pursuit seems a pretty good starting point to explore how even a normal sedan can optimize traction and handling control through use of all-wheel-drive technology. 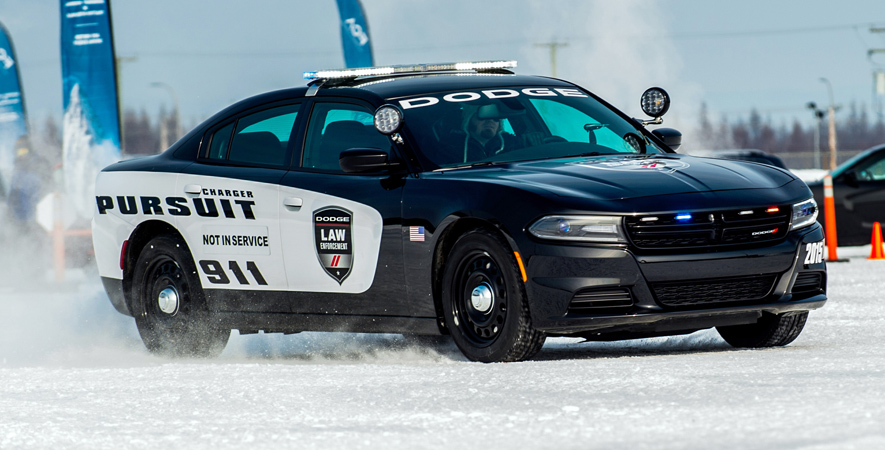 That much power on a snowy, ice-crusted race track could have proved a handful in normal rear-wheel-drive configuration, even with snow tires, traction control and a full suite of nanny technologies. But the “intelligent” AWD system’s segment-exclusive active transfer case and software control system can direct up to 38 per cent of torque to the front wheels for extra traction and driving security.

I was only too aware that the snow-covered walls of the ICAR circuit were actually as ice-hard as concrete, so it was a relief to pin at least a little faith on the seamless corrections of the AWD system dialing in shifting torque ratios according to traction.

“And it’s only there when you need it,” Mike Kirk, one of FCA’s driveline engineers told me. “Our front-axle-disconnect system works seamlessly to provide the best mix of available power and fuel economy.”

When road and driving conditions don’t demand it, these systems revert quickly to their normal powertrain configurations.

Of course, the 2015 Dodge Charger Pursuit AWD model that captivated us so easily on the track was just one example from a lineup that includes AWD systems based on front-wheel-drive architecture and rear-wheel-drive vehicles, along with varying degrees of 4WD complexity for more serious off-road vehicles.

There are still some models in the FCA lineup restricted to only front-wheel-drive or rear-wheel-drive choices, including the Fiat 500 and 500L, Dodge’s Dart, Challenger and Viper, the commercial Ram ProMaster and ProMaster City and FCA’s current stable of minivan models.

But if you tally  up the total FCA lineup of 26 different models, you will find that 17 of them can be had with some sort of AWD/4WD availability. 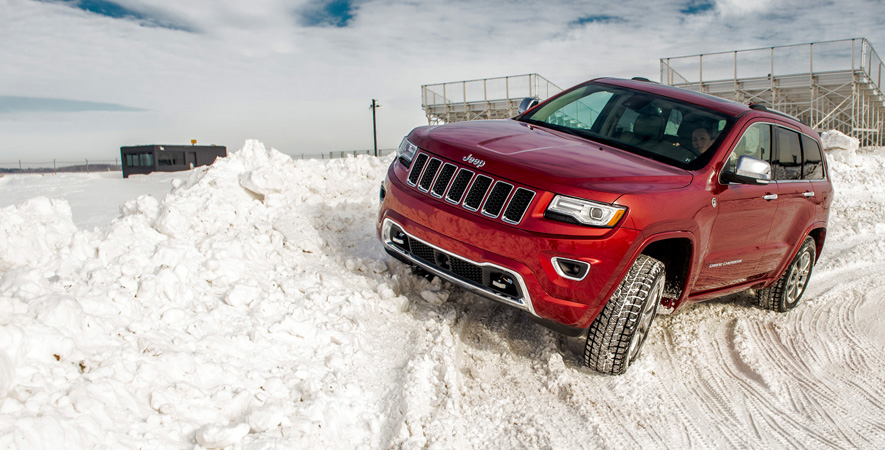 The AWD/4WD option is even available on the base models of nine different nameplates – the Jeep Renegade and Cherokee, Dodge Charger, Chrysler 300 and Ram light duty and heavy duty pickups. And AWD/4WD offerings also come standard on models like the Dodge Durango, Jeep Grand Cherokee and Jeep Wrangler.

There will be more AWD/4WD choices coming down the product pipeline as technology and time allows, including the recently announced Fiat 500X crossover. And I wouldn’t be at all surprised if FCA resurrected an AWD offering in their future minivan lineup, as well.

We tested a full slate  of FCA vehicles in winter conditions to see how the variety of AWD/4WD systems could benefit almost any driving situation, from fighting your way through suburban snow drifts to maneuvering through a nightmare tangle of off-road intensive trails and switchbacks with Jeeps, Dodges and Rams.

With the added security of four-corner traction, good snow tires and vigilant driver attention, it seems that even the worst of winter can be tamed with a sense of renewed driving confidence.

And with even a bit of pleasure.

Yes, it might just put a grin on your face, all this dashing through the snow. 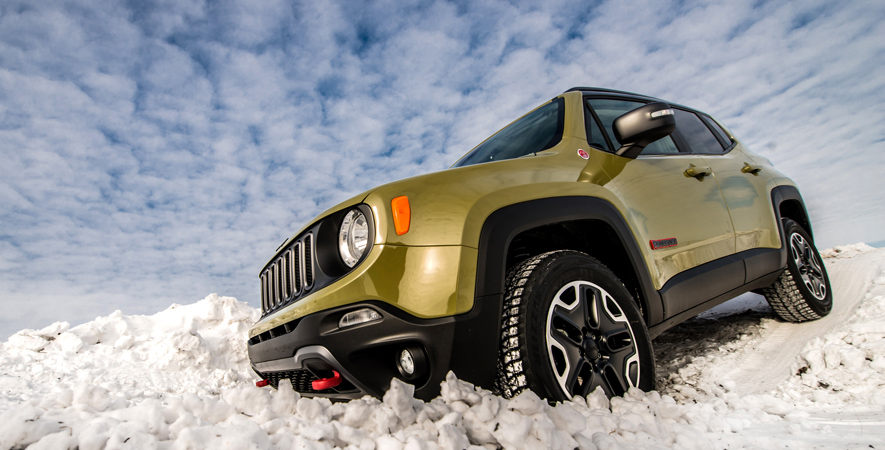 Racing Roundup: NASCAR (Ford, too) blew it by not