Able to go 383 km, this crossover is the leader in battery-powered range, and critics are pumped up. So, what’s all the fuss? Jim Kenzie has a preview.

LOS ANGELES – The Chevrolet Bolt EV electric car goes on sale early next year, starting at $42,795, about which more, much more, anon.

So, what’s the fuss?

You could look at Bolt two ways. First, as a car. Second, as an electric vehicle.

The designers and engineers who built Bolt would cringe at the very suggestion, because they believe the electric-ness of it is fundamental to the car.

Of course, they are wrong, as I will now explain.

This configuration has had only modest commercial success, despite it being the most practical form a small car can have.

Chevrolet calls Bolt a Crossover, because that’s the hot word in car marketing circles these days. But, if it looks like a duck … 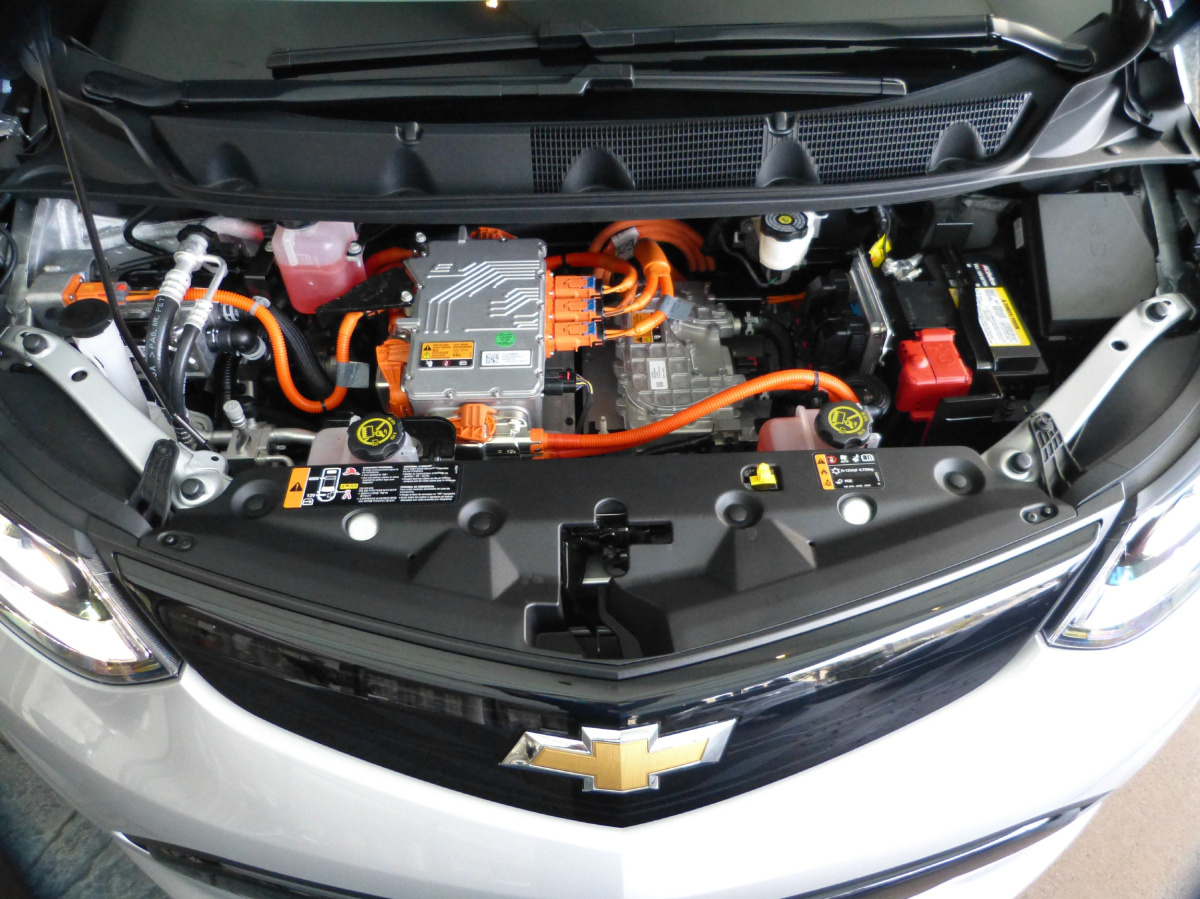 The Chevrolet Bolt EV is quick off the mark, with its peak torque being developed at zero r.p.m., and 0-100 km/h comes up in just over seven seconds.

As a compact hatchback, Bolt is excellent. It is good-looking and roomy. The second-row seats fold to make a nice, flat cargo floor, with additional covered space below.

Or, you can remove the floor panel to augment that space. Which, of course, means no spare tire. Too bad.

The interior looks and feels airy, especially in the lighter colour my co-driver Marc Lachapelle managed to snare for our test drive through L.A. and in the hills of Malibu.

It’s got all the high-techery anyone could possibly want, although SatNav is not available. If you have the right smartphone, you might be able to use Apple CarPlay or Android Auto, but this seems an odd omission for a forty-grand car.

Some of the interior trim bits look a bit economical for a car with a base list price of over forty grand.

But generally, it is a pleasant and practical place to be.

Now, about Bolt’s electric-ness. By the extremely low standards of this field, Bolt scores pretty well.

It is a pure electric, powered by a 200 horsepower permanent magnet motor driving the front wheels.

The 60 kWh nickel-rich lithium-ion battery consists of 288 cells which are encased in a structure that effectively forms the car’s floor. This puts the 435 kilograms of battery weight as low as possible for a better centre of gravity which assists in good handling, and also protects the battery in collision. 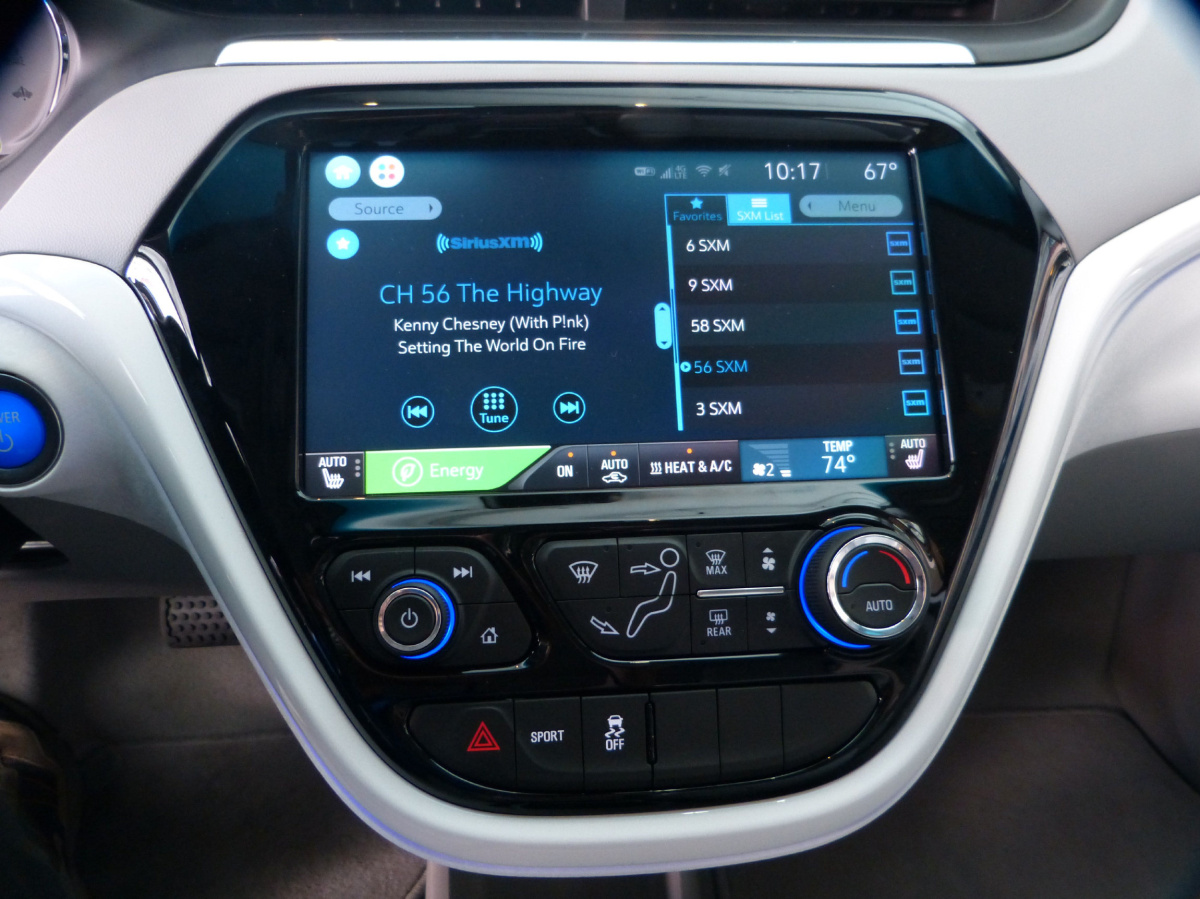 According to the U.S. EPA’s electric car rating system, this gives Bolt a maximum of 238 miles (383 kilometres) of range. What that range might be in Winnipeg in February was not announced …

Still, this makes Bolt the leader in battery-powered range for even remotely affordable electrics, and is well within the limits of most people’s daily driving needs.

It can be fully recharged in only 60 hours (!) from your normal household circuit. If you install a 240-volt Level 2 charger, it takes a mere 9.5 hours.

So, you can have range or short recharging time, not both.

What’s Bolt like to drive? Even General Motors’ U.S. president Alan Batey admits ‘fun-to-drive’ has become a cliche, but it actually fits.

As are all electrics, it’s very quiet, with only the occasional and largely unobtrusive motor whine sneaking through.

The general silence actually presents a challenge for electric car engineers because with no engine noise, wind and tire noise — not to mention squeaks and rattles — have nowhere to hide. Bolt impresses on all counts here.

Again, as with all electrics, Bolt is quick off the mark, with its peak torque being developed at zero r.p.m., and 0-100 km/h comes up in just over seven seconds, so it can easily chirp its tires at the stoplight grand prix. 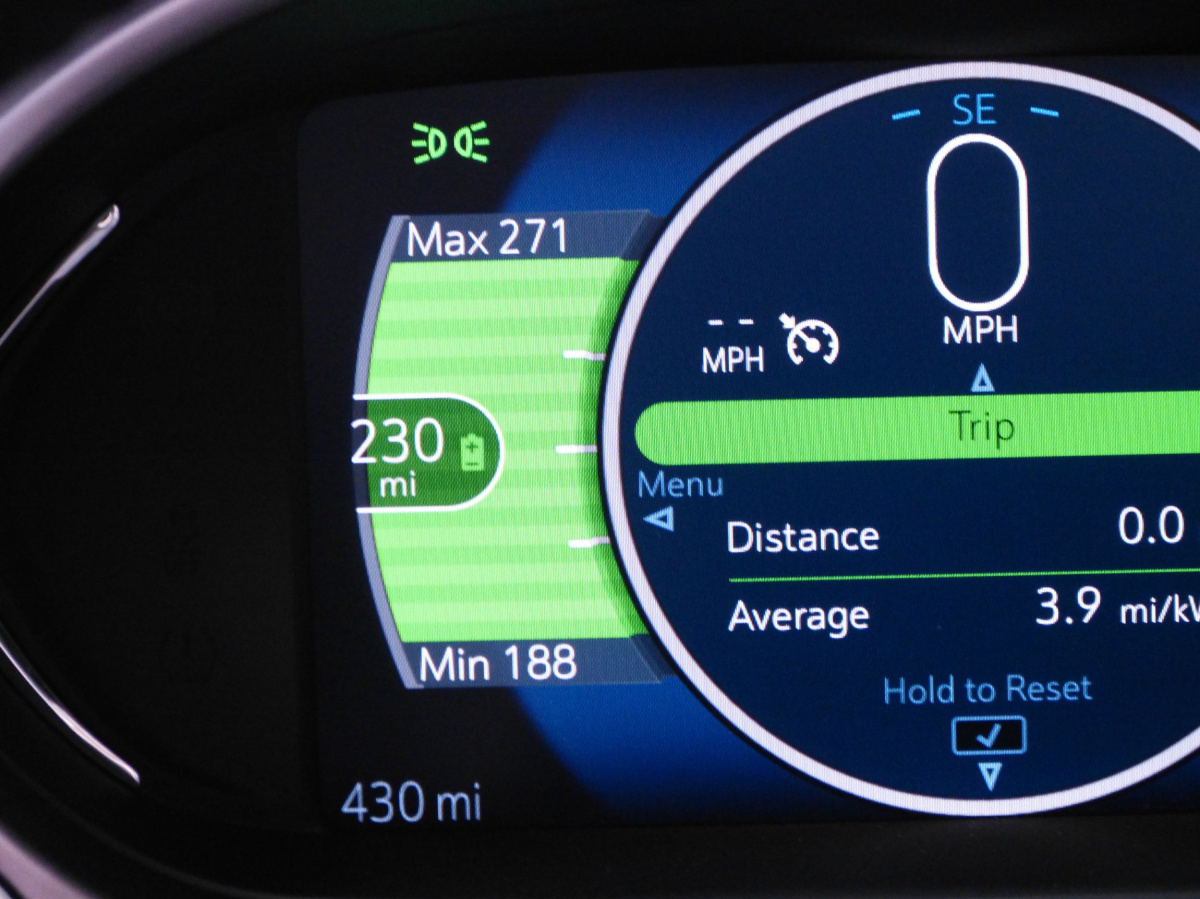 According to the U.S. EPA’s electric car rating system, the Bolt has a maximum of 238 miles (383 kilometres) of range.

Then again, that’s partially because the tires are designed for maximum economy, hence have a hard tread compound which results in pretty low levels of grip.

This doesn’t necessarily mean the car handles badly. It is composed and confident, the steering is light and direct.

It’s just that the tires give up very early in the proceedings, and if you push it at all, you’ll be howling down those canyon roads, scaring off all those coyotes.

One advantage of all motor-driven (as opposed to engine-driven) cars is regenerative braking. Kinetic energy usually lost to heat can be recaptured into the battery and used towards future forward motion.

Bolt offers several levels of ‘re-gen.’ In ‘Drive’ mode, it behaves pretty much like a normal car with an automatic transmission. Lift off on the accelerator and you’ll get a bit of ‘engine braking,’ and at a stoplight, if you take your foot off the brake you will experience a bit of ‘creep.’

The objective here was to make Bolt feel as ‘normal’ as possible, so as not to scare off people who are new to electrics.

Slide the ‘shift lever’ back a notch to ‘Low’ (a misnomer because there is no ratio change in what is essentially a continuously variable transmission) and the degree of re-gen is upped substantially, so that the deceleration will be sufficient to handle most moderate traffic conditions. It can make Bolt almost completely a one-pedal car.

Some people find this operation a bit too extreme, too jerky. You can mitigate this with careful moderation of pedal on-and-off application.

But if you don’t like it, stay in Drive. Your choice; clever of Bolt engineers to offer this choice.

Pull back on a ‘shift paddle’ on the steering column and you can raise the re-gen to yet a higher level, if you really want to maximize range. 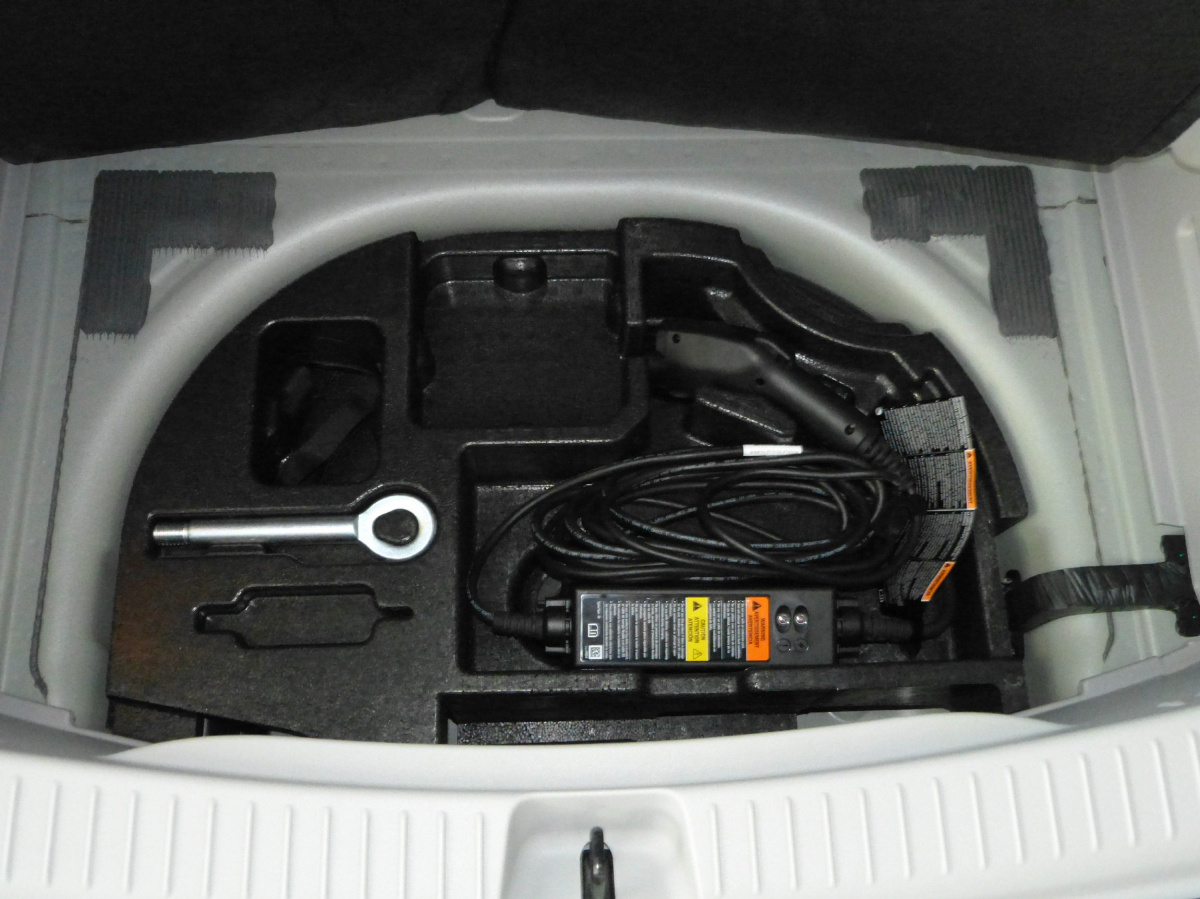 The Bolt can be fully recharged in 60 hours from your normal household circuit. If you install a 240-volt Level 2 charger, it takes 9.5 hours.

Dash displays show how well you’re doing, and it almost becomes a game with yourself. How long the fun will last with longer ownership is hard to say, but I still play Spider Solitaire. A lot.

Of course, the brake pedal will also engage the friction brakes if the electric drag can’t get the job done.

I was unable to get a clear answer as to if, or at what deceleration threshold of re-gen braking, the brake lights would come on. Even without brake pedal application, the car can slow down abruptly enough that you do want to warn following traffic.

OK, so why did I separate Bolt’s car-ness from its electric-ness? Because the briefest glance at the facts shows that electric cars are pointless.

Apart from the noise, there’s nothing about the Bolt that wouldn’t be better if it had a modern Diesel engine in it.

It would double, possibly triple, its range. You could ‘recharge’ that range fully in five minutes, not nine to 60 hours. From a delivery infrastructure that is in place literally everywhere in the world, which would not require you (or likely for most urban dwellers, your landlord) to install a multi-thousand dollar Level 2 charging station where you live.

And, Bolt’s overall environmental impact would probably be less with a Diesel engine.

First, cars contribute only about 12 per cent to our greenhouse gas emissions, and with electrics’ current (ho-ho) collective market share around one per cent, that’s a 0.12 per cent reduction in air pollution.

No percentage of new car sales that electric cars can possibly hope to achieve will ever have any significant impact on our atmosphere.

In most parts of North America, electricity is generated by burning fossil fuels, so no advantage there.

And with the president-non-elect in the U.S., coal seems set for a comeback. Oh, goody.

Chevrolet is offering an eight-year, 160,000-km warranty on Bolt’s battery. But when it is done, you will have 450 kg of toxic sludge to deal with. 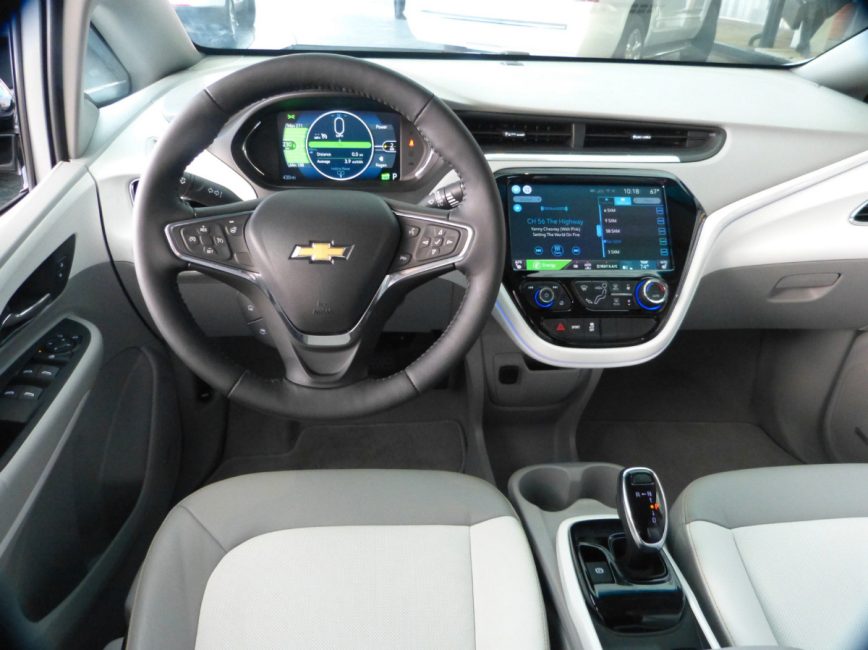 The interior of the Chevrolet Bolt EV feels roomy and airy, especially in the lighter trim.

My two Diesel station wagons are both much older than that, with almost two-and-a-half times that mileage on them and at least that much more life still left in them. No recycling issues if they ever actually die.

And the most environmentally friendly car you can buy is one which doesn’t have to have a replacement built for it.

So, by electric car standards, Bolt is very good. But by the standards that all other cars have to meet, Bolt just doesn’t measure up.

What’s more, a Diesel Bolt’s business model would not depend on governments bribing potential customers with your and my tax dollars. With $14,000 in Ontario, mostly going to wealthy people who can afford any car they want, why isn’t there rioting in the streets?

Listen; if you want to spend your own money buying an electric car and pretend you are saving the planet, fill yer boots.

Likewise, if you want to spend your own money buying a Porsche and pretend you’re driving on the Nurburgring on your way to work.

Just don’t expect me to be happy with the government using my taxes to help you fulfil either fantasy.

When Bolt — when any battery-powered car — can compete on a level playing field without tax-funded bribes, give me a call. 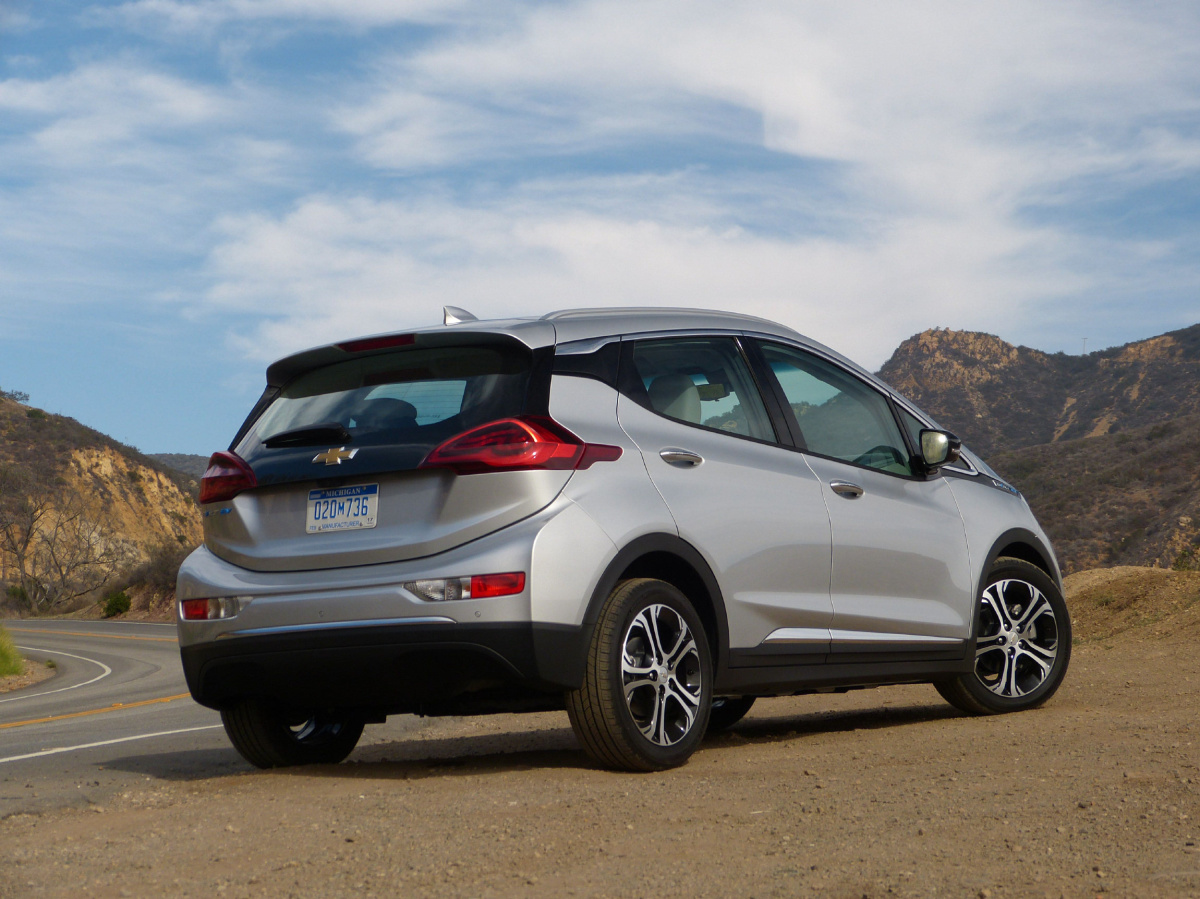 The Chevrolet Bolt EV the Bolt is a four-door, five-seat compact hatchback.

Competitors: None really, if a long-range-for-an-electric is what you are comparing