Chevrolet Volt - EV Without the Worry

The 2017 Chevrolet Volt, seen here in handsome Siren Red Tintcoat, an extended range electric compact hatchback with an onboard gas-powered generator, reducing EV range anxiety and offering the best of both worlds.

Fall is not just a season to mark the end of things.

It’s also a time of new beginnings, especially in the auto sector where the annual lineup turnover leaves a mixed bag of 2017 and 2018 models at both dealers and press fleets.

Among still relevant 2017s, we have to consider the Chevrolet Volt, riding on the coattails of last year’s major makeover and carrying over next year with only minor changes for 2018 – new colours, trim content adjustments and a few added techno tweaks. 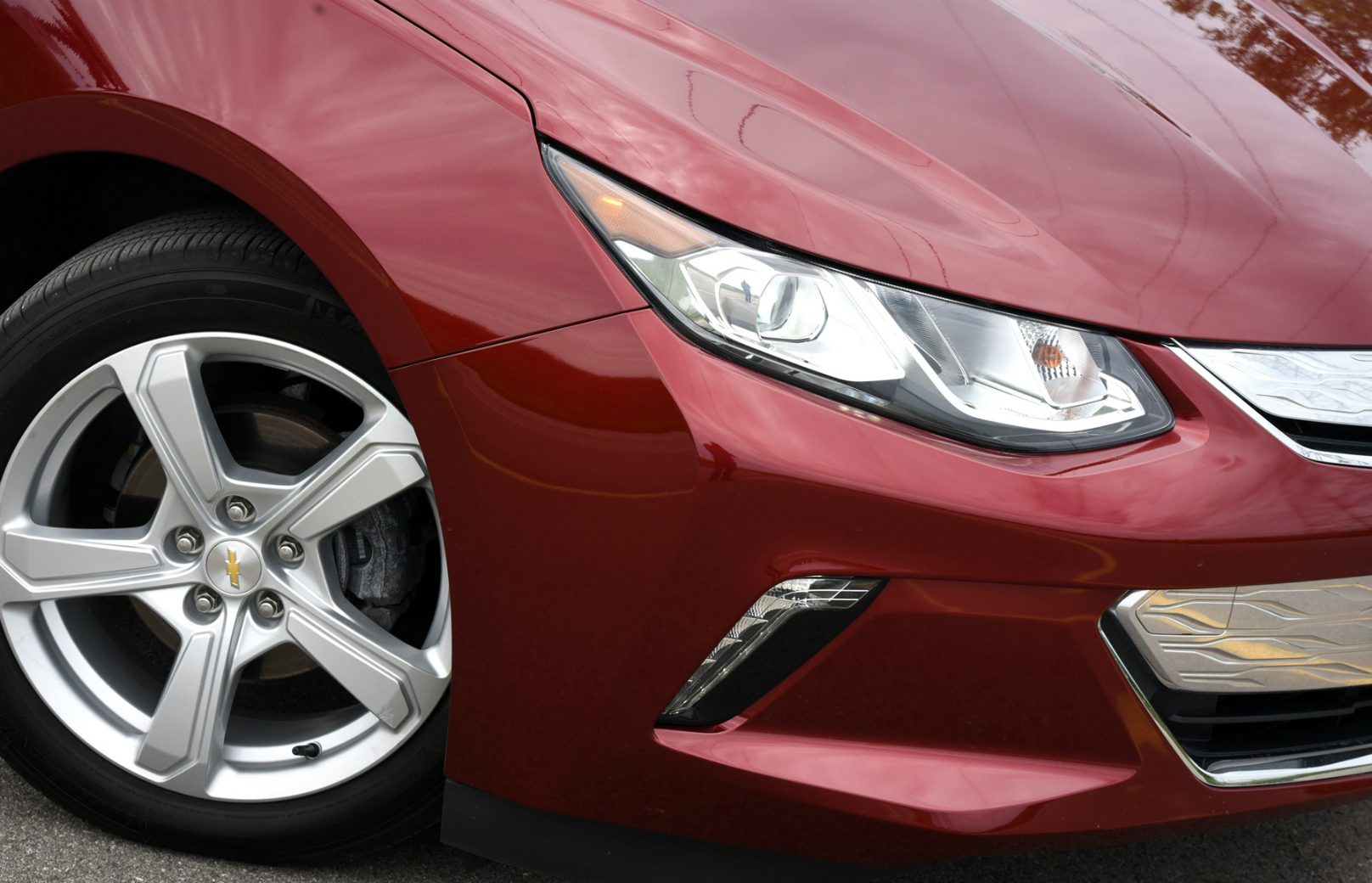 The Volt remains unique as a plug-in hybrid that uses it onboard gasoline engine mainly as an electrical generator. This original solution to EV “range anxiety” still works, enhanced by the second-generation improvements made for last year’s 2016 models that include:

∙ New Regen on Demand control paddles on back of steering wheel. 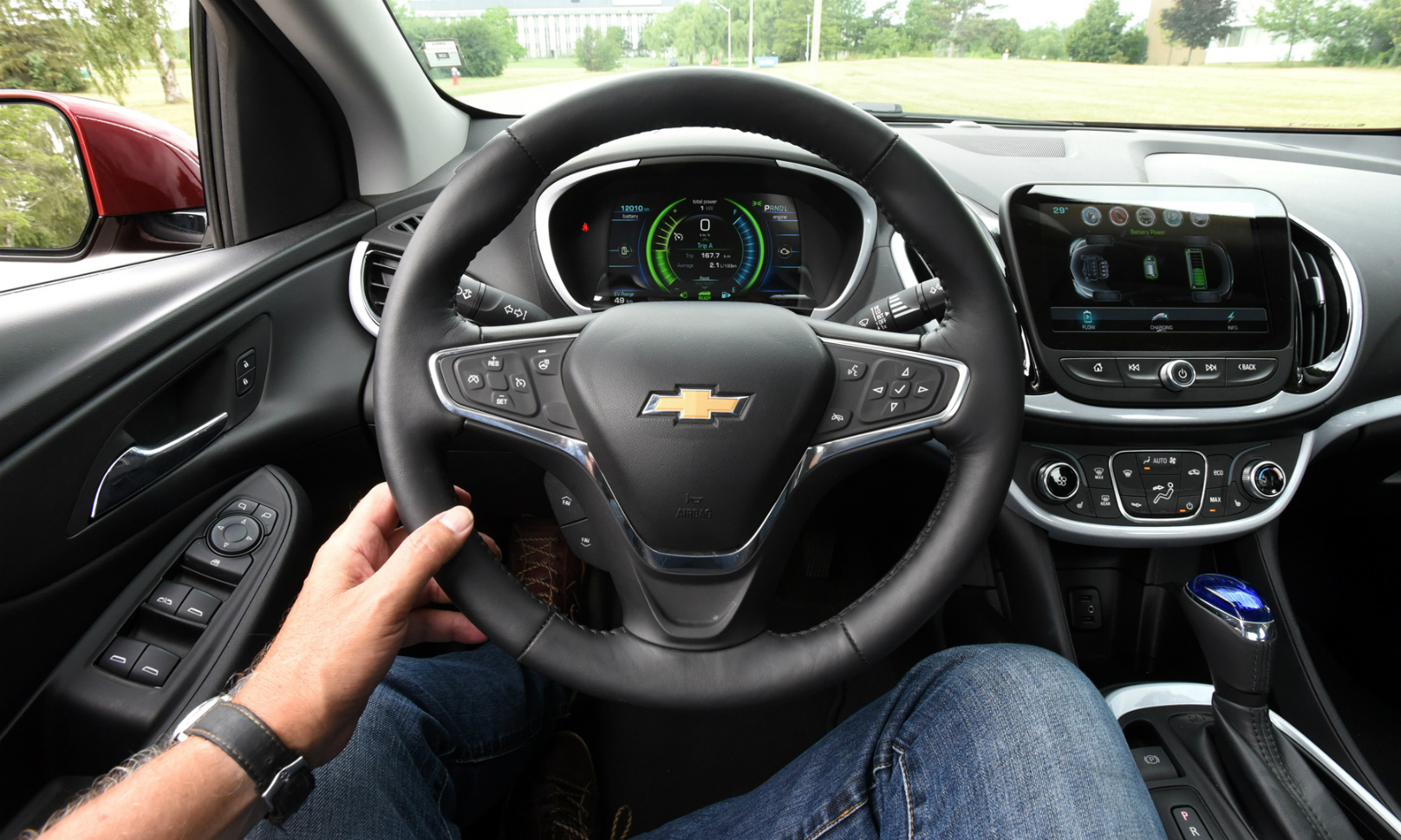 Technological evolution may be inevitable but GM engineers maintain that the modifications to the Volt were made in response to customer feedback, which mainly reflected on the immense satisfaction of gasoline-free driving.

Most commuters in Canada take the car for a less than 30-minute commute and usually also less than 30 kilometres one way. The Volt’s enhanced 85 km range fits well within those parameters.

My daily driving routine as a news photographer usually averages more than 100 km and this is where the range extending strengths of the Volt comes into play.

It removes any worry about “running out of juice”.

It’s hard to rate the fuel economy of a car that is so dependent on driver demands, distances and recharge availability.

Drive it without ever plugging in and the four-cylinder range extender earns 5.5/5.6L/100km (city/hwy). Plug in overnight, however, and some owners could easily attain a 0L/100km average for weeks or even months.

So, how much does it cost to recharge the car electrically? 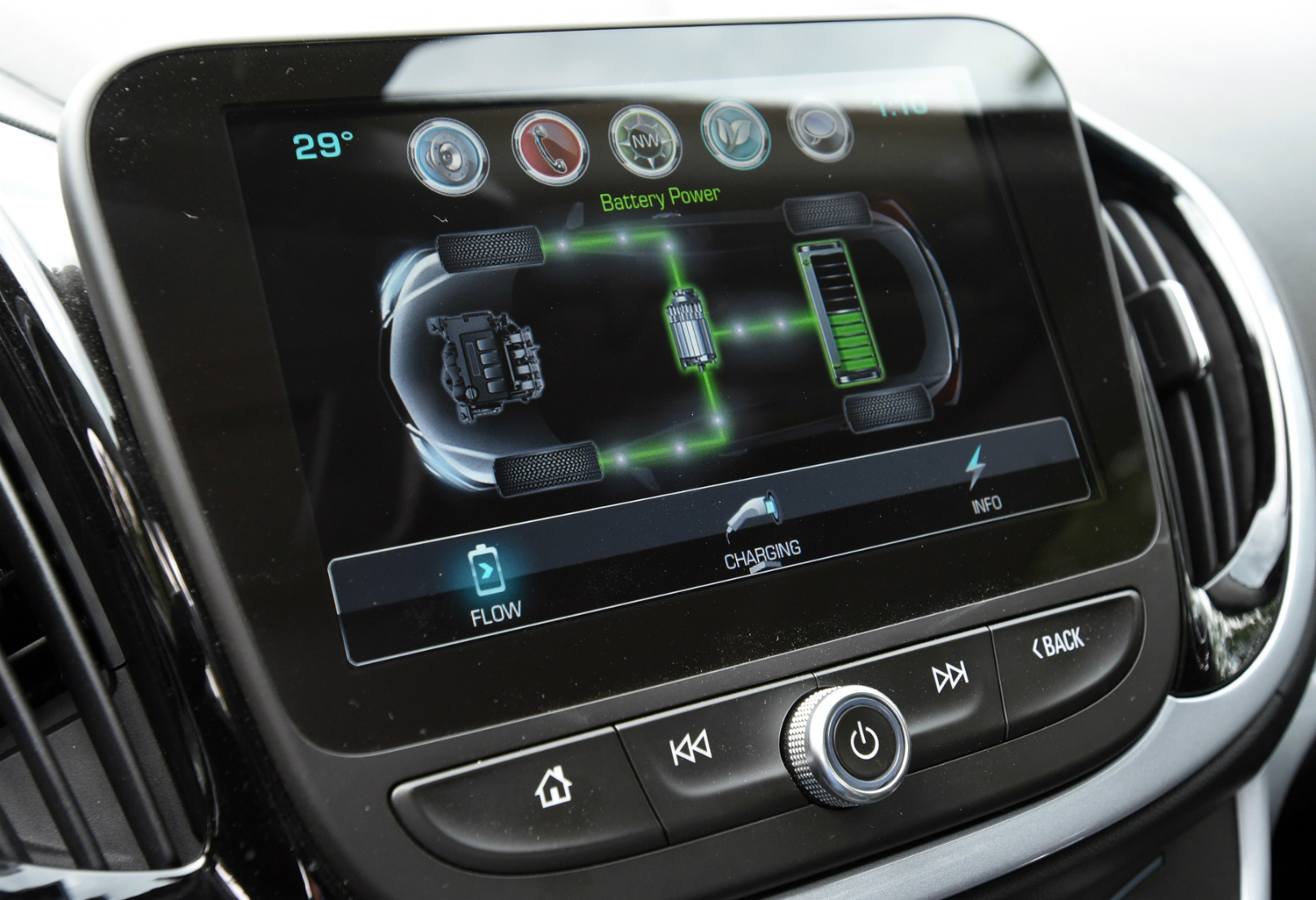 Recharging takes about 13 hours via a standard 120V plug or 4.5 hours using a 240V outlet. It takes about 13 kWh to recharge the battery (there’s a bit of a buffer built in), so plugging in at my local off-peak rate of $0.077 per kWh worked out to about a dollar a day.

So, while those first 80-plus kilometres every day were hardly “free”, they certainly come at a lower cost than fuelling even the best gas-powered econo car.

The Chevrolet Volt is smooth-lined and sleek, stylish from any angle, a little plasticky when seen from the rear. The interior is comfortable, better-finished than the original, roomy up front but still requiring compromise for second row seating, even after the shift from a four- to five-seater layout. 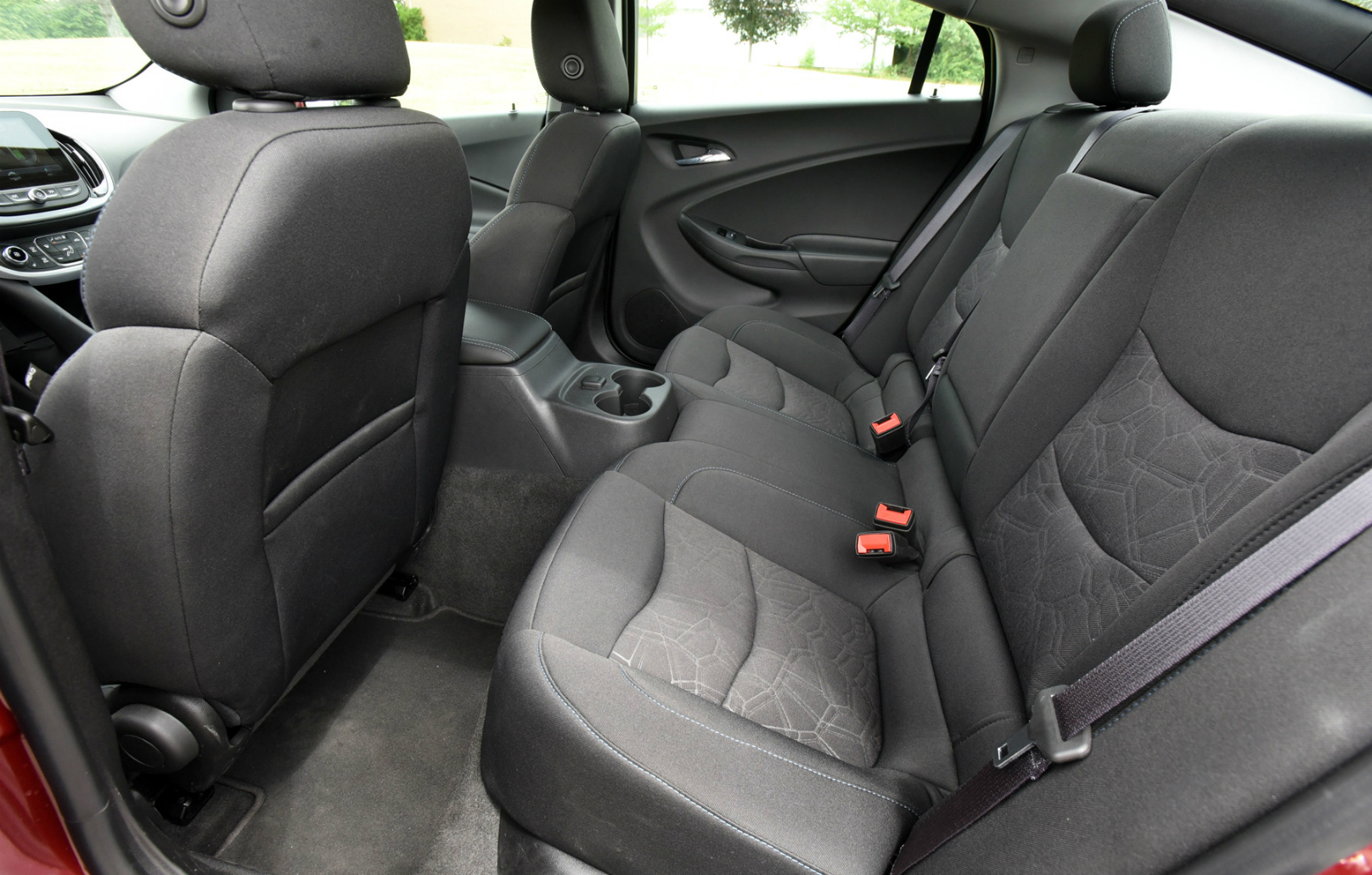 But tick off the check boxes of provincial incentives that are the same as for the all-electric Bolt ($14,000 in Ontario, $8,000 in Quebec and $5,000 in B.C.) and a free pass into commuter heaven via HOV/HOT lanes courtesy of the Green Licence Plate program.

Add in the fuel savings and eco-conscience-salving reduced emissions and the Volt seems a viable alternative that blends the best of EV and gasoline-powered technologies. 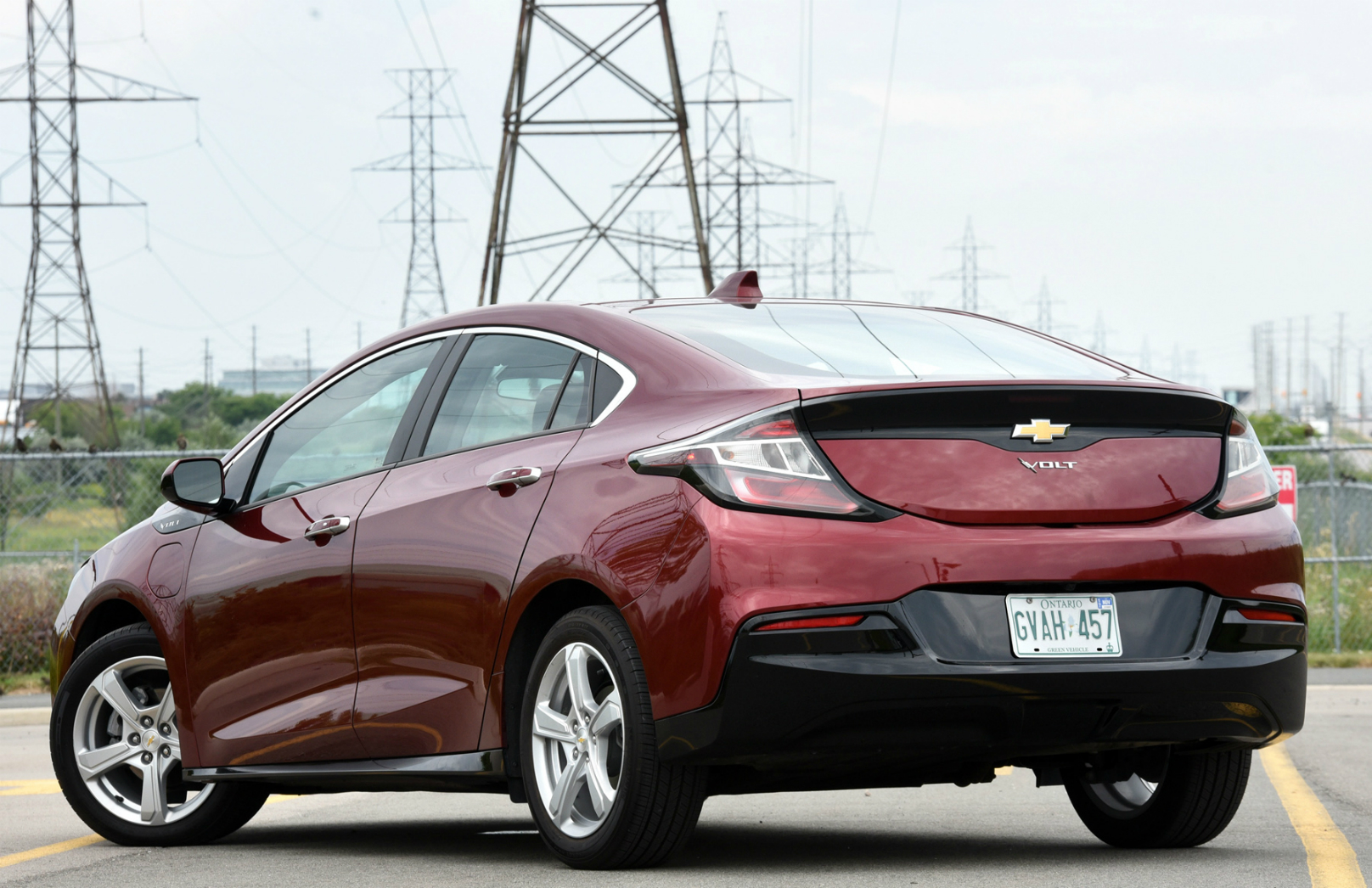