Chevrolet Cruze ups the ante in 2016

Since its debut in 2010, the Cruze has been an important vehicle for GM with sales of more than four million units worldwide.

NASHVILLE, Tenn.— As a consumer, any time you can get more for less it’s a bonus.

That’s exactly what Chevrolet is doing for buyers in the compact car segment as it ups the ante with its redesigned 2016 Cruze sedan.

Since its debut in 2010, the Cruze has been an important vehicle for GM with sales of more than four million units worldwide. It was one of their first global vehicles and is now available in more than 75 countries. 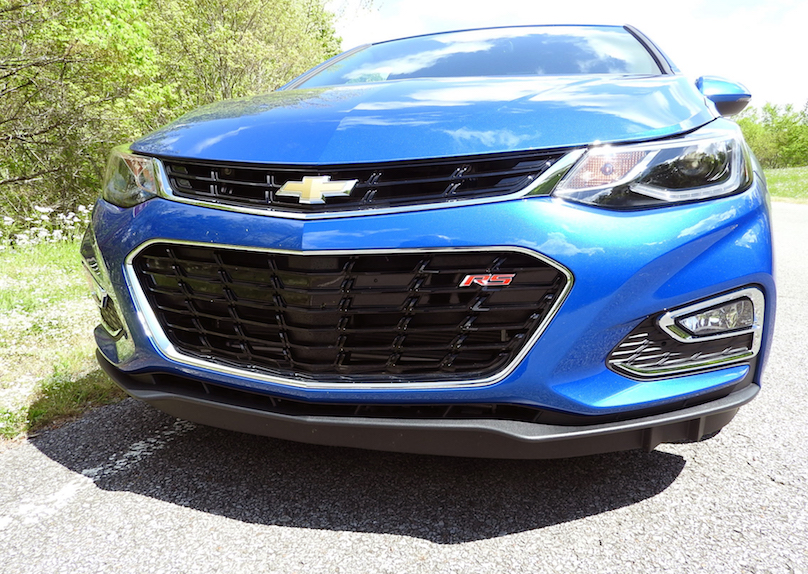 So with the introduction of the second-generation Cruze for 2016, Chevrolet is not sitting on its laurels.

Instead, the Cruze comes in as a longer, leaner and lighter vehicle that is better than its predecessor in almost every way. And to top it all off, it offers more standard features at a lower starting price.

That’s important because the competition is intense in this category with vehicles like the Honda Civic and Hyundai Elantra leading the way with the Toyota Corolla and Mazda3 nipped at their heels on the sales charts.

Styling-wise, the new Cruze has what is becoming a “Chevrolet look” with a more exciting exterior profile, using many of the same design features found on the recently released Volt and Malibu models.

Interestingly, it’s a very aerodynamic car with a coefficient of drag of 0.28, better even than the iconic Corvette sports car and the electric Volt, both of which come in a 0.29.

Overall, the body is 68 mm (2.7 in) longer, sitting on a slightly longer wheelbase and with a slightly wider track. 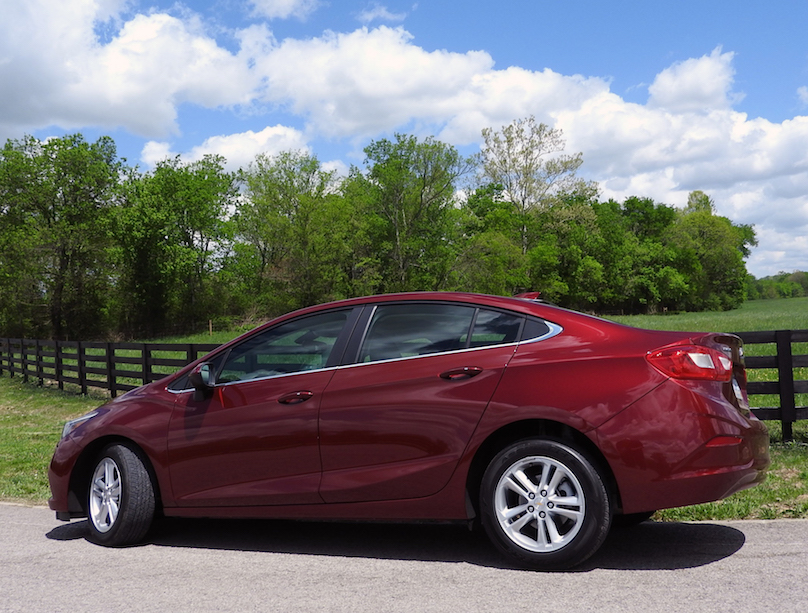 It’s available in four trim levels, L, LS, LT and Premier. GM expects the LT to be the model of choice, making up nearly three-quarters of all sales. The LS and LT are available with six-speed manual or six-speed automatic transmissions, while the L comes only with a manual and the Premier only in automatic.

Both the LT and Premier models are offered with an optional RS appearance package priced at $695 and $995 respectively. Both come with a rear spoiler, sport body kit, fog lamps and RS lettering, while the latter adds 18-inch aluminum wheels.

At the launch, GM officials were crowing about the value-added standard features, particularly in the LT version, which adds 16-inch aluminum wheels and a seven-inch colour touch screen that syncs easily to a smart phone via Apple CarPlay and Android Auto. 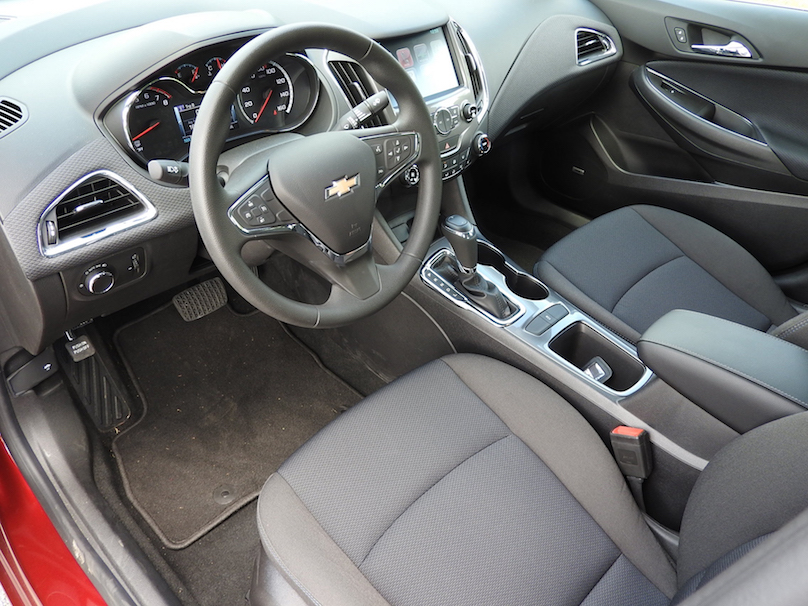 Add to the mix standard heated front cloth seats and fuel-saving start/stop technology, all at a price $520 less than the previous model.

Under the hood, the 2016 Cruze gets a new 1.4-litre turbocharged four-cylinder engine with direct injection. This engine produces 153 hp and 177 lb/ft or torque, a bump of 15 hp and 29 lb/ft over the 1.4-litre engine previously offered.

Fuel economy for the 1.4L automatic is also much improved with numbers of 7.8/5.6/6.8 L/100 km city/hwy combined compared with 9.1/6.3/7.8 in the outgoing model. Meanwhile, acceleration numbers have been improved considerably with a 0-96 km/h time of 7.7 seconds, about two seconds faster than the old power plant. 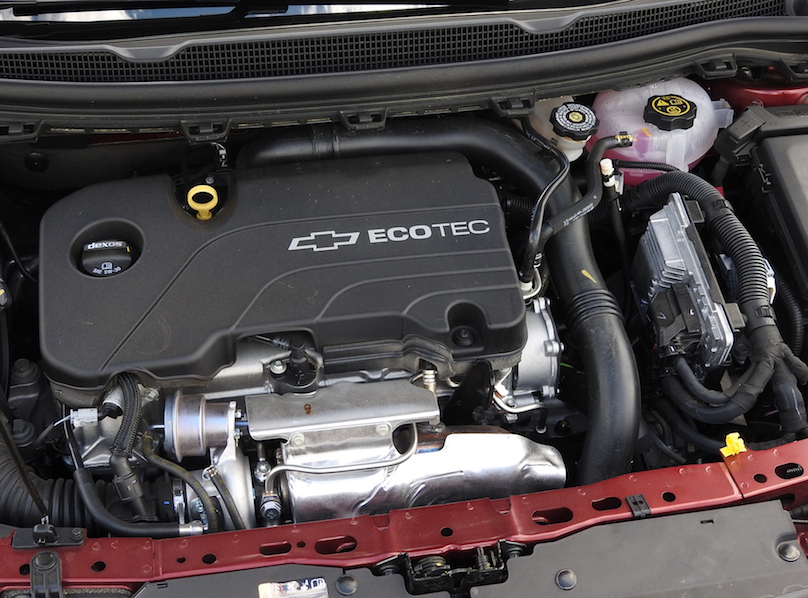 Having said that, the Cruze is geared more to economy than performance— hardly surprising when competing in the compact class against so many other fuel-sipping vehicles.

Due to time constraints we only had an opportunity to drive LT- and Premier-trimmed models, both with automatic transmissions. The take-rate for the manual is only expected to be in the 10 per cent range, so we sampled the models that GM Canada expects will make up 80 per cent of sales here.

During our ride and drive largely on rural country roads outside Nashville, we found the Cruze handled corners well with minimal body roll, even on the tightest of corners. The weight loss of 113 km (250 lb) certainly helps in this regard.

The suspension felt stiff without being harsh and the steering was fairly precise.

Inside the cabin, there is a noticeable difference between the LT and Premier trim levels. The Premier has a richer, more upscale look with its standard leather upholstery, larger infotainment screen and other more premium features.

That being said, the interior overall has been upgraded with better quality materials and a more pleasing design, although hard plastic is still much in evidence on the lower trim levels.

The new Cruze is loaded with technology items like the smartphone connectivity mentioned earlier as well as available 4G LTE Wi-Fi hotspot and wireless charging.

On the safety front, the number of active safety features available has grown to include features such as Rear Cross Traffic Alert, Rear Park Assist, Lane Change Alert with Side Blind Zone Alert, Lane Keeping Assist and Forward Collision Alert.

Ten airbags are standard and a rear backup camera is included on LS, LT and Premier trim levels. Four-wheel disc brakes and tire pressure monitoring are also standard across the board.

In the coming months, GM will add a hatchback model to the Cruze lineup and then introduce a diesel engine to the mix early next year.

That bodes well for the Cruze, which is already a solid contender in the compact class and looking to move up and challenge the leaders on the sales chart.

Chevrolet Cruze 2016 at a glance