The 2017 Porsche Cayenne S E-Hybrid Platinum offers full five-passenger seating, up to 1,690 litres of cargo space and an electric mileage equivalent of 5.1L/100.

Driving the 2017 Porsche Cayenne S E-Hybrid Platinum is a study in opposites that somehow attract.

At one pole is the cost of this premium luxury mid-size crossover with a sticker price, as tested, of $111,200 including $3,590 for the optional “Purpurit Metallic” paint.

At the other end is fuel efficiency of 5.1L/100 km combined thanks to its plug-in hybrid technology. I personally used a sixteenth of a tank of fuel covering about 220 km from west of London, ON, to Toronto at highway speeds — a journey that normally takes me a half tank of gas.

While the Cayenne S E-Hybrid is not new, with Metroland colleague Lorne Drury driving one for these pages back in November 2015, the Platinum trim model (starting price $92,100) is and it comes with just about every convenience Porsche can throw at it before delving into the huge options book. 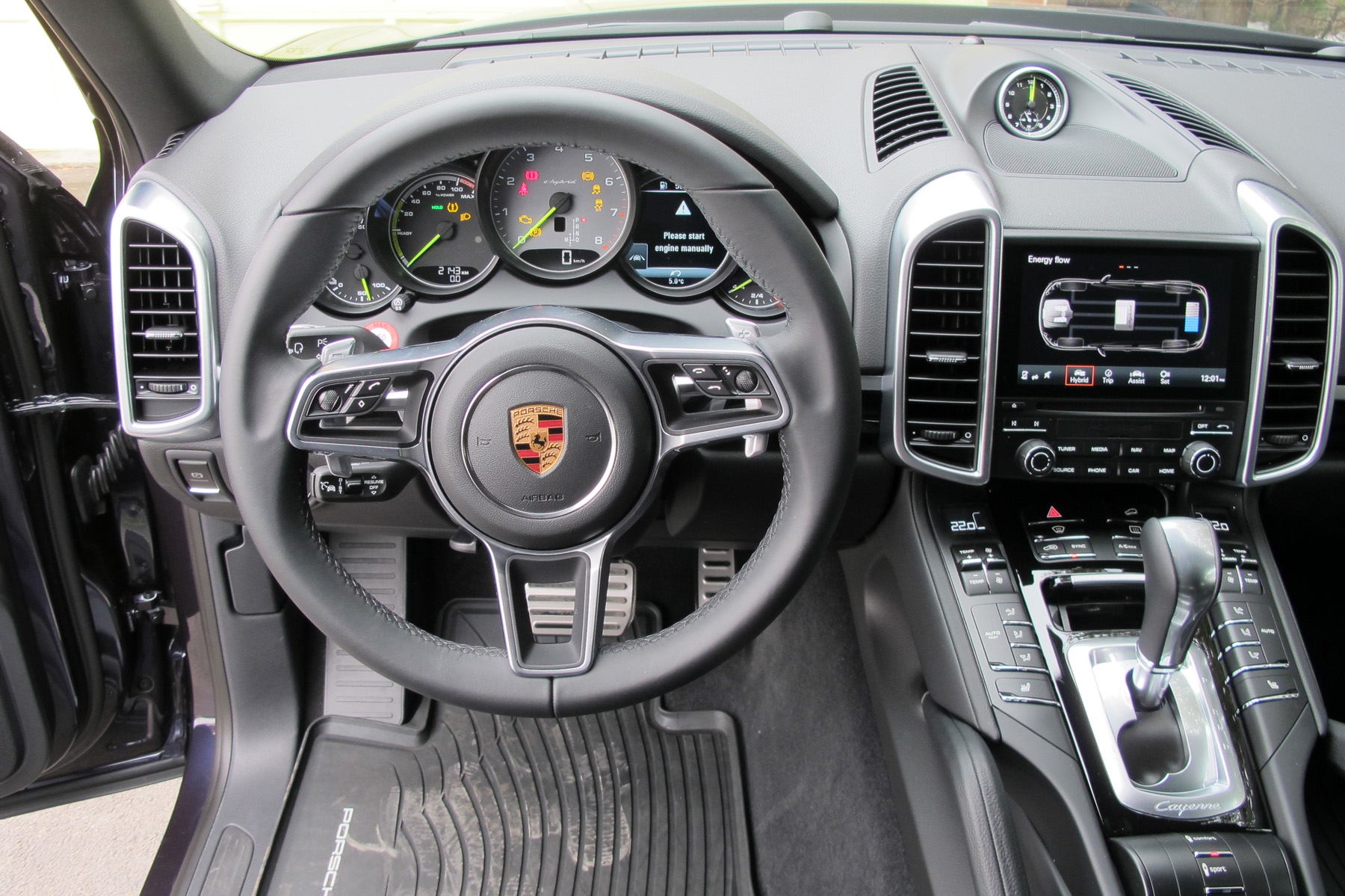 There are three kinds electric vehicles if you don’t count hydrogen fuel cells, beginning with an EV or all electric vehicle, which features a battery only that has to be recharged from the power grid.

Most common is the hybrid where a rechargeable battery and electric motor serve as a power boost to the main gasoline or diesel engine.

And then there is the plug-in hybrid vehicle (P-HEV) with a larger battery pack with motor that acts in combination with a gasoline or diesel motor using complex computing to get the best possible fuel efficiency — which is what we have in this week’s Cayenne S E-Hybrid Platinum tester.

Power is derived from a combination of a supercharged 3.0-litre V6 engine mated to an electric motor (combined 416 hp and 435 lb/ft of torque) and a lithium-ion battery with a capacity of 10.8 kWh.

An eight-speed automatic transmission is standard, as is the permanent all-wheel-drive with centre limited slip differential with a normal driving mode bias of 58 per cent to the rear.

Like all Porsches these days, you are greeted by a bevy of buttons along the centre console — the most important of which for the plug-in system to work more efficiently are the E-Charge and E-Power buttons aft of the shifter. 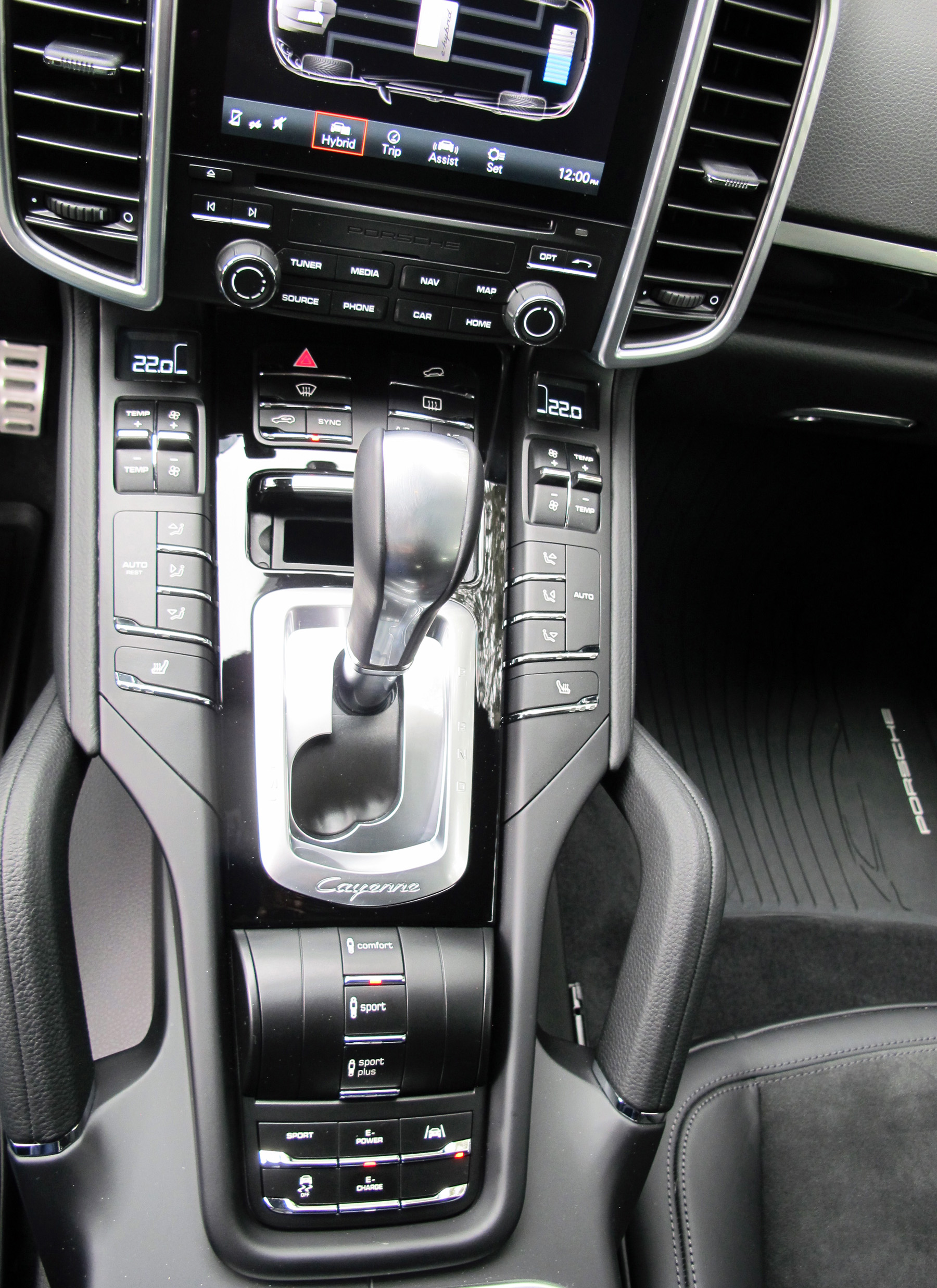 If the battery is depleted and you can’t plug in, start driving and press E-Charge and the engine/motor charge the battery as well as driving the wheels. You can help by coasting or braking to add regenerative power.

Leaving London, I turned on the E-Charge and it took about 45 km at highway speed to top up the battery, at which point I turned it off and continued on normally, which meant I could save the battery for when I needed it.

Also Read: A BMW for all seasons, all reasons

You can tell when the battery is full or what part of the system is feeding what by a large power flow display on the centre stack screen or another smaller one on the main instrument cluster. 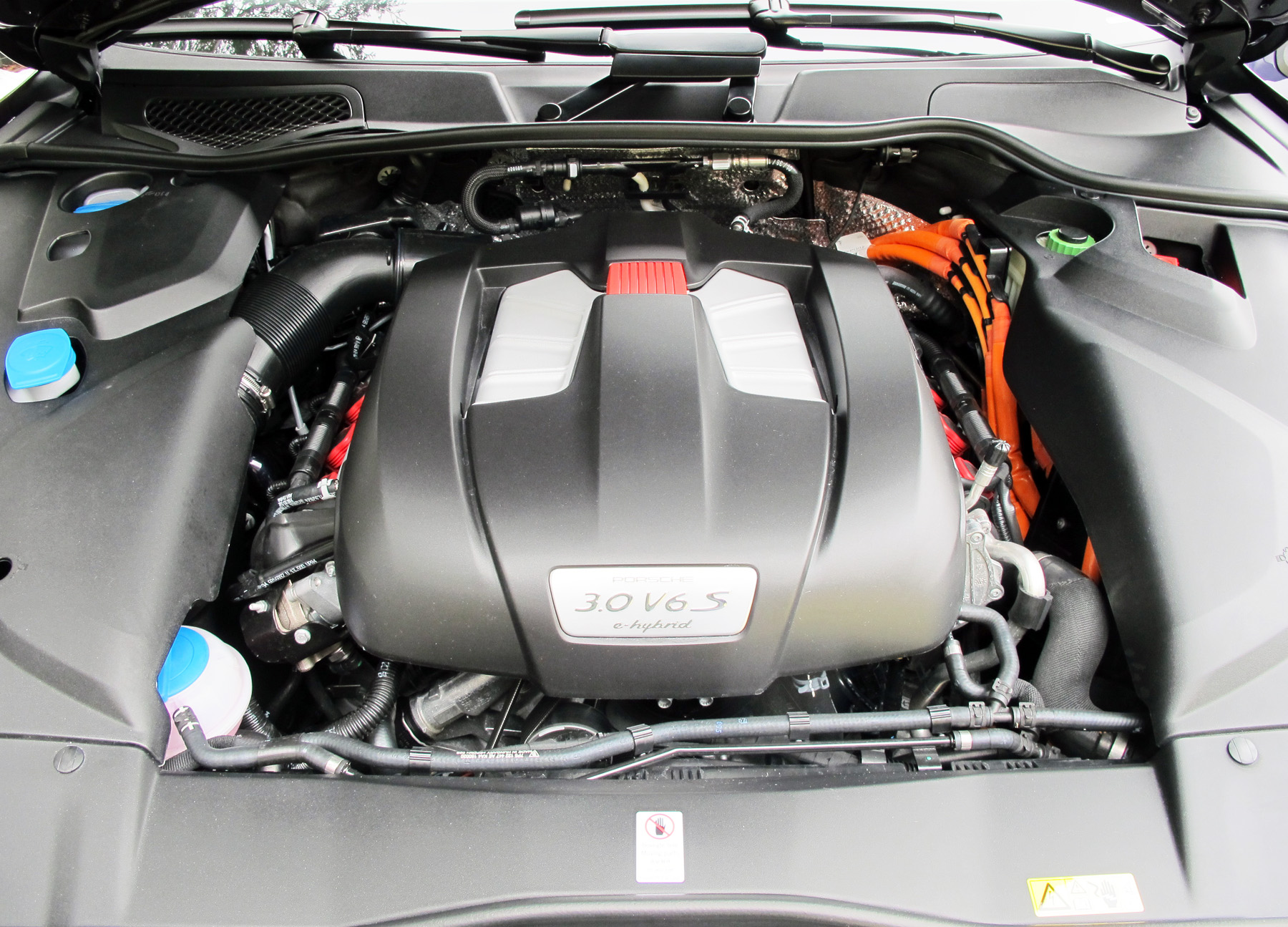 When you start the Cayenne P-HEV it defaults to the all-electric drive mode, where the engine is not engaged unless the gas pedal is pushed.

This can be over-ridden by the E-Power button that locks out the engine/motor for pure electric running, which can be augmented by coasting and braking.

I used it several times and got about 20 km from it before the system defaulted to normal running mode. 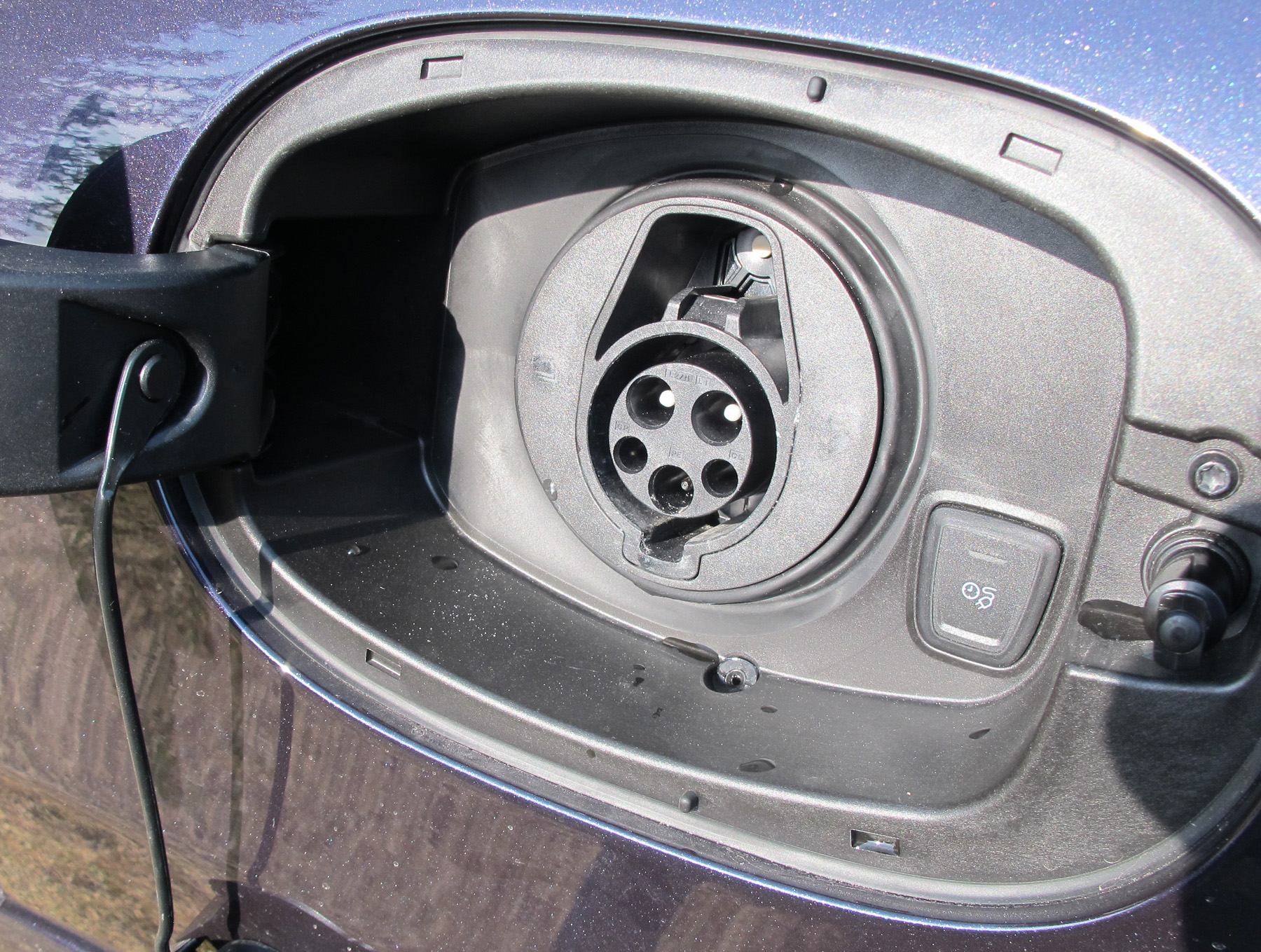 When it’s time to plug in, the Cayenne P-HEV comes with a bag in the trunk with a 7.5 m (25-ft) cable that plugs into either a 110-120-volt or 240-volt outlet, complete with a hefty transformer box you can mount on the wall if need be.

The charging instructions in the owner’s manual covered three pages with all kinds of pictures about what little lights around the plug-in point meant – all very confusing. 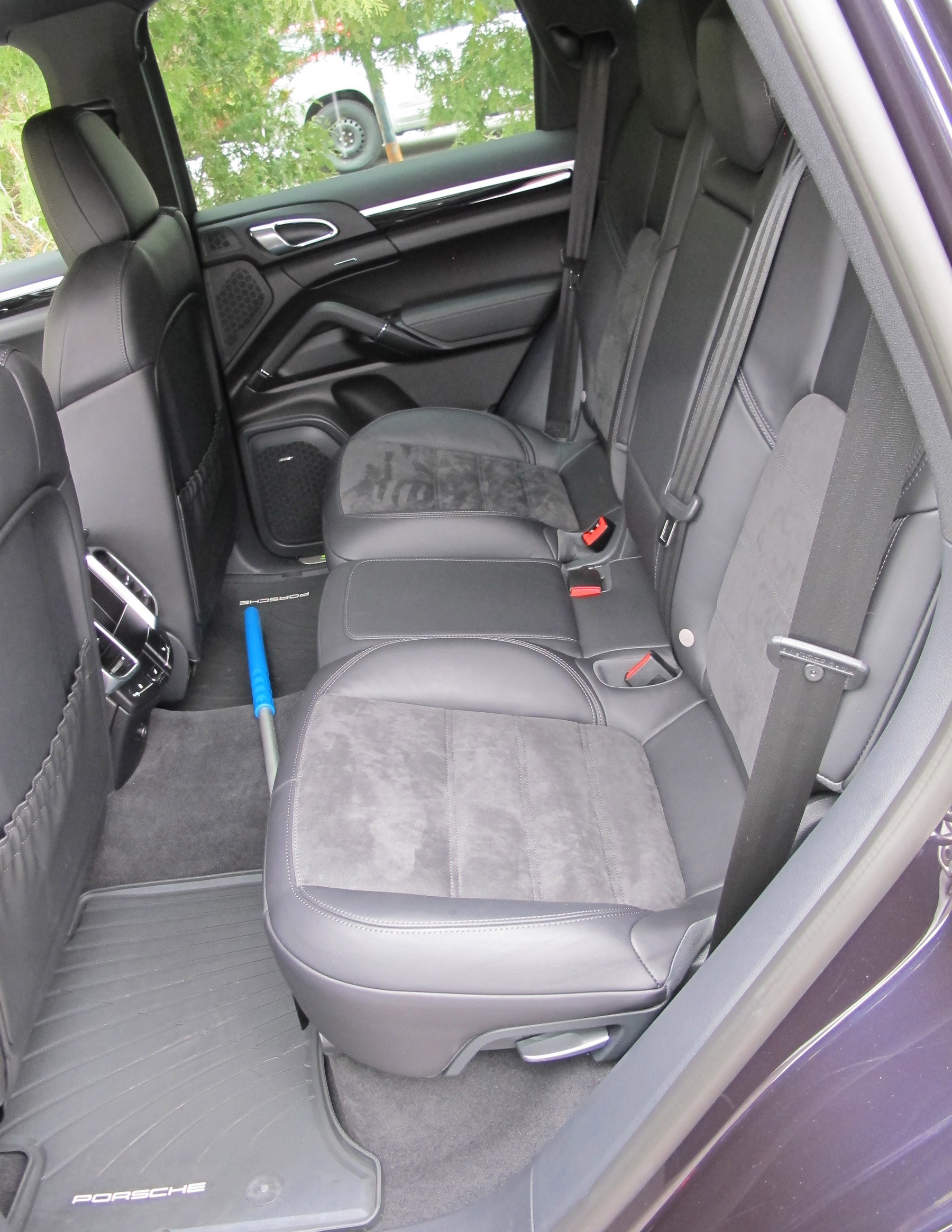 Assuming Porsche factored in dummies like my and my friend who lives way out in the country, we just plugged it in, hoping we would not hear a zap sound and see a plume of acrid grey smoke.

Of course, nothing happened until about two hours later when a violent rain and lighting storm (in the middle of February no less) blew through, knocking out power for six hours.

Remembering the warning about not trying to charge in a thunderstorm, we unplugged at the first sign of rain. 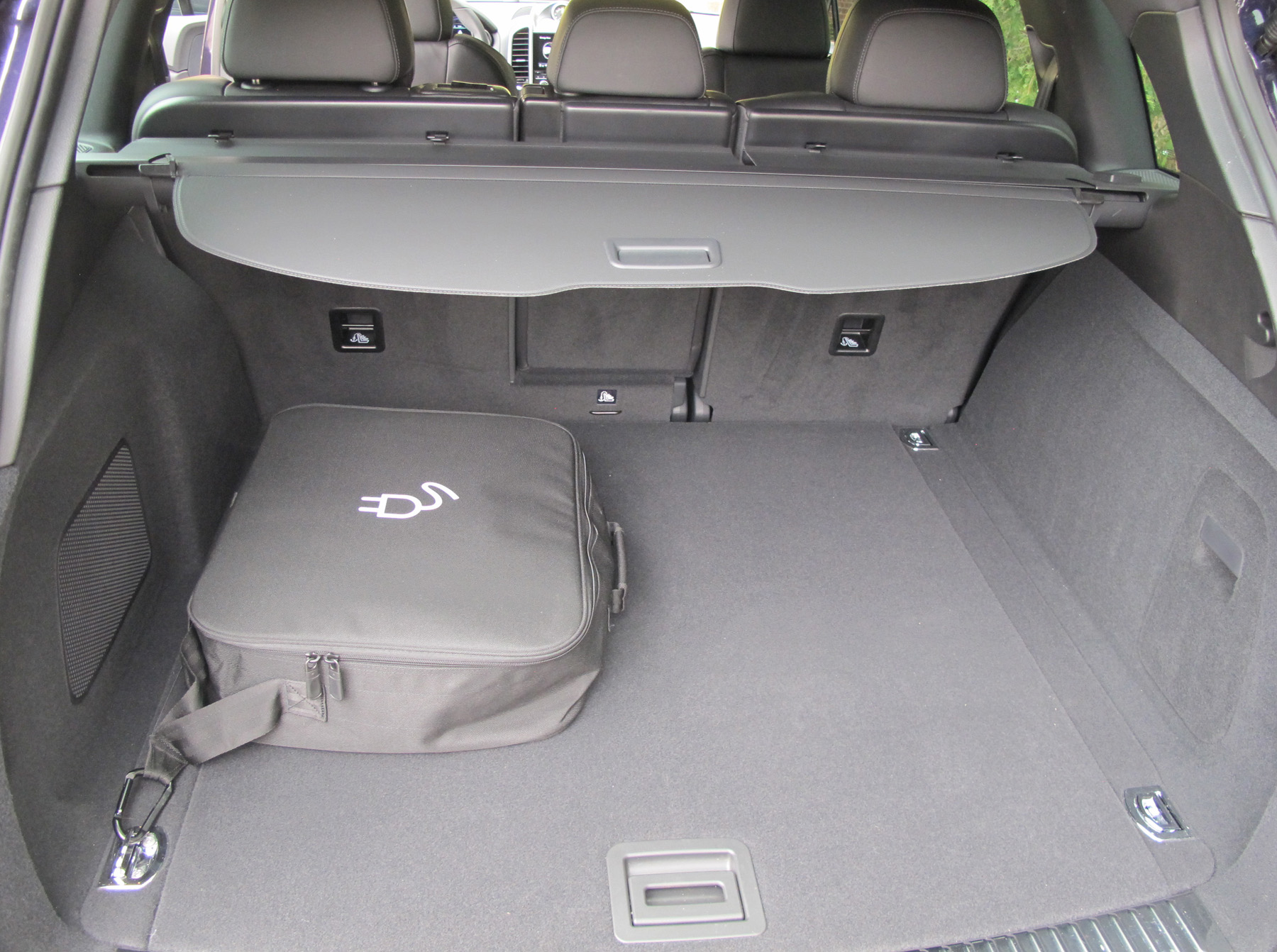 It was wild weather for sure. I even saw a honeybee on the outside mirror of the Cayenne on Feb 24, a day which broke temperature records for that date.

And with having the air conditioning on during a warm drive down to my friend’s home, my thoughts naturally turned to global warming, which I think we all agree is a threat to every living thing, even if we are slow to react.

But when carmakers like Porsche are making it part of their business plan to cut greenhouse gases, it’s good for all of us.

ENGINE: Supercharged 3.0-litre V6 engine with an electric motor (combined 416 hp and 435 lb/ft of torque) and a lithium-ion battery with a capacity of 10.8 kWh.