Despite some setbacks the RAV4 is a worthy choice, especially as a used-vehicle purchase. Carcomplaints.com gives this Toyota its “Seal of Pretty Good” approval and we concur.

As part of Toyota’s Canadian RAV4 product launch in early 2013, journalists were invited to a peepshow at the Woodstock, Ontario, plant where North America’s fourth-generation RAV4s are cobbled together.

It’s an industrial-park amusement ride, with RAV4 skeletons creeping along production lines filled with overhead cables, LED monitors and pneumatic tools suspended from massive superstructures. Silent robot drones glide down the corridors ferrying parts to workstations. On the day of our visit, human workers were scarce on the floor.

Despite the high levels of automation at Toyota’s three plants in southwestern Ontario, some 8,000 Canadian manufacturing jobs rely on the RAV4 and its Toyota/Lexus brethren continuing to get a warm reception from the buying public.

The RAV4 was the world’s first compact crossover sport-ute when it debuted in 1994 in Japan and Europe. It was created, Frankenstein-like, by surgically fusing unibody car bones and off-the-shelf components, including the Celica All-Trac’s all-wheel-drive system, to create a small fuel-saving SUV. An oddity then, it sparked an automotive segment that’s selling like white-hot Leafs tickets today.

Subsequent generations upped the RAV4’s content and refinement – including a wickedly quick V6 model – which kept Toyota’s cute-ute consistently in the hunt. It’s attracted a quiet fandom, some of them serial buyers.

Toyota designers expended a lot of time, clay and server space to get the new RAV4’s look just right. It’s aggressive and dynamic even standing still, and it avoids looking plump and doughy like so many small utes. Still, some have noted the RAV4’s passing resemblance to the Ford Escape and perhaps the Subaru Tribeca (may it rest in peace). 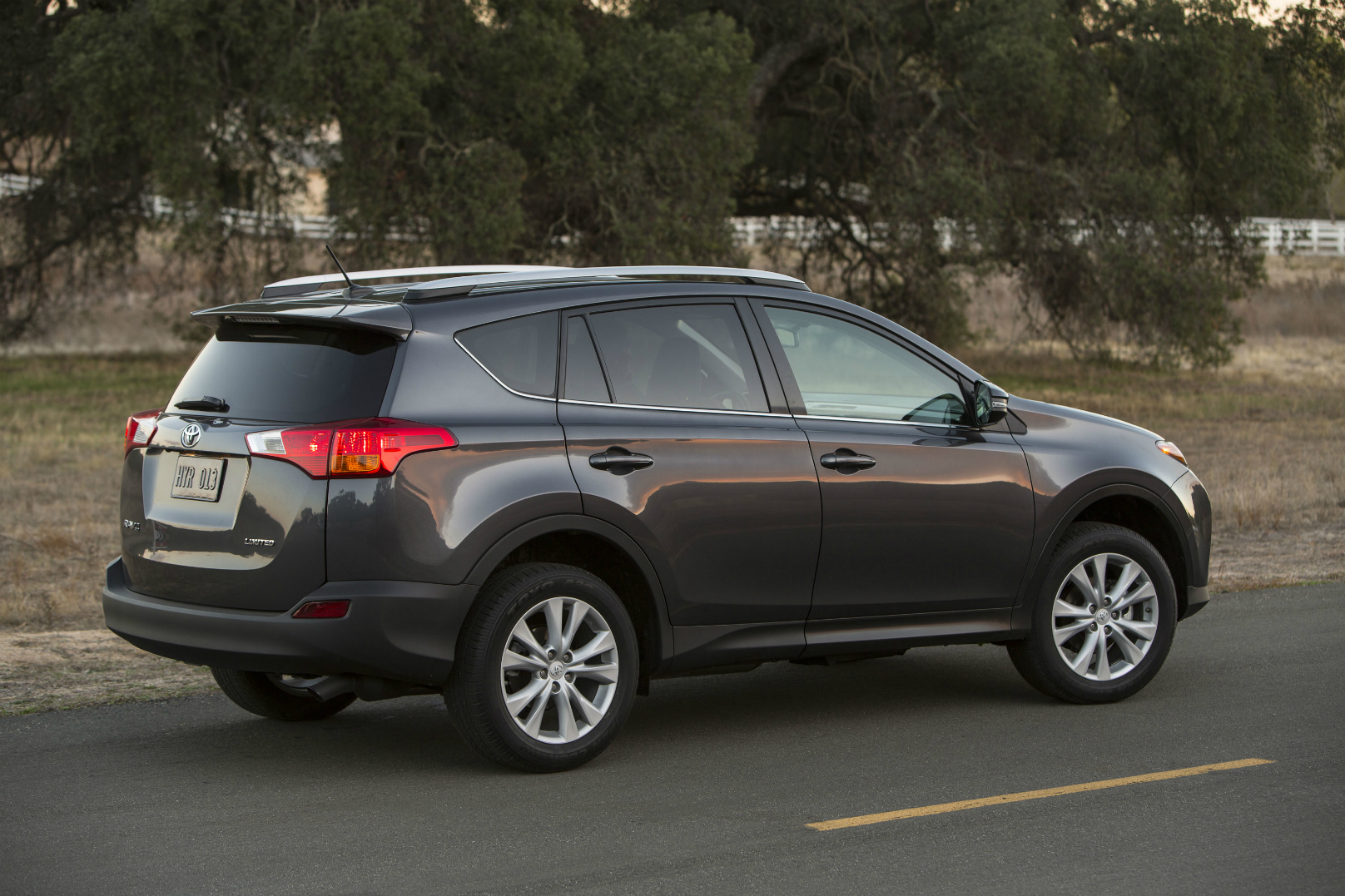 The RAV4 remained “right-sized,” meaning product planners resisted the temptation to make it bigger. Third-row seating was no longer offered, mainly due to the fact there was little buyer interest in the awkward jump seats anyway. What buyers get instead are comfy cabin dimensions for five and a more generous cargo hold.

One improvement shoppers immediately noticed was the absence of the spare tire hung on the rear door; it was moved indoors and under the load floor (a mini spare, naturally). That allowed the cargo door to swing upwards instead of sideways, which is easier to operate on a slope and in tight parking situations.

The cockpit is driver-centric with primary and secondary controls all within reach. The instruments are big and easy to read. On offer is a host of high-tech gear; things like blind-spot monitoring, lane departure warning, back-up camera and more. The floor at the back seat is flat enough to accommodate the footwear of three passengers, and the 60/40 split-fold rear bench can recline several degrees to enhance comfort.

All-wheel drive is automatically engaged when accelerating or when wheel slippage is detected. It’s especially quick to act, thanks to the electro-mechanical coupling used to summon rear wheel grip. There are three different drive modes: Auto, Lock and Sport. Lock allows up to half of available engine torque to be dispatched to the rear wheels, enhancing traction in mud or sand. The base model is front-wheel drive only.

Subsequent model years did not see big changes. Engineers revised the frontal structure to improve the RAV’s score in the Insurance Institute for Highway Safety small-overlap crash test for 2015, and a power liftgate became optional the same year. It earned a mid-cycle refresh for 2016 with updated styling, including sleeker LED headlights, and optional accident avoidance technologies.

Also debuting last year was the RAV4 Hybrid. Borrowing much of the gas-electric powertrain from the Camry Hybrid, it employs a 2.5L gasoline engine, electric motors front and rear, and a nickel-metal hydride battery that together dispatch 194 hp through a continuously variable (CVT) automatic transmission. The Hybrid delivers about 12 mpg more than the regular all-wheel-drive RAV4 and nearly as much cargo space.

The RAV4 feels light on its feet, even tossable, belying its upright, sport-utility stance. Engine noise is subdued, turning just 2100 rpm at 120 km/h. On the highway it’s the wind and tire noise that gets you, though to be fair, our tester was shod with aggressive winter tires.

Zero to 97 km/h comes up in 8.4 seconds in the heftier AWD model, while the Hybrid manages a virtually identical 8.3 (while it makes more power, it’s carting around an additional 150 kg of electric hardware). Braking distance is a little on the lengthy side. 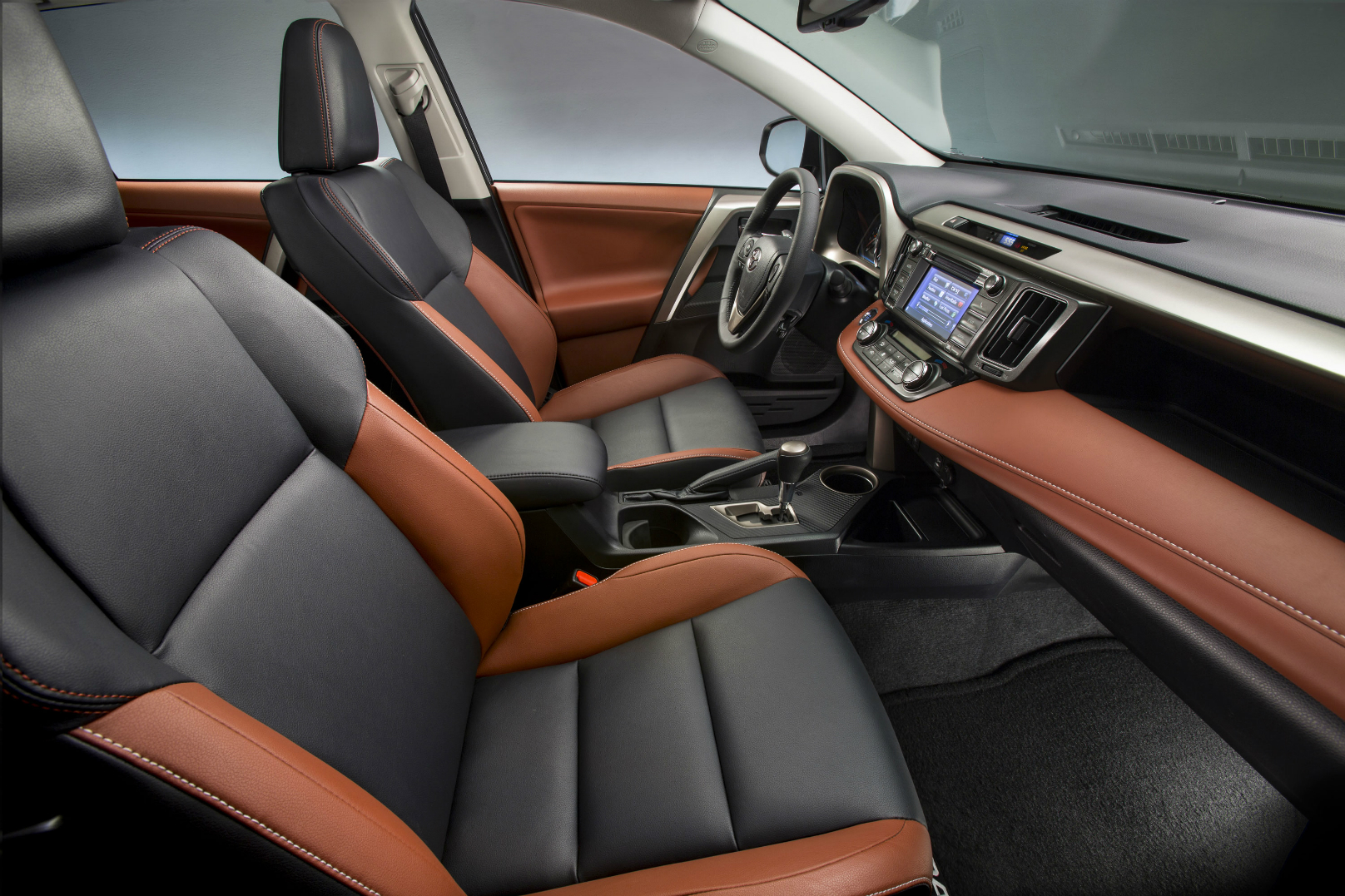 The ride can feel a little stiff with the optional low-profile 18-inch tires. While the body was free of squeaks and rattles, we did notice the front cowl was vibrating at highway speeds – a flub that owners have noted online, at least in some 2013 models.

“The hood vibrates all the time, but you will really notice it if you are parked at the top of a hill or stop at a traffic light at incline. It seems as if the hood is very lightweight,” reads a not uncommon gripe.

The fourth-generation RAV4 is a good all-rounder that competes well in a hotly contested segment that includes the crowd-pleasing Honda CR-V, Ford Escape and Mazda CX-5. Buyers love the roomy cabin, refined drivetrain and quiet composure. The big four cylinder isn’t quite as fuel-efficient as some of the segment’s best, however.

Used-vehicle shoppers value dependability (or they should), and the RAV4 doesn’t disappoint in this regard. Given the huge numbers of RAV4s in circulation, there haven’t been a lot of complaints logged online.

The single biggest concern is the quality of the navigation and radio displays in earlier models, which drivers note are very hard to read in harsh sunlight. It would take a few years for Toyota to come up with a brighter and more legible screen. 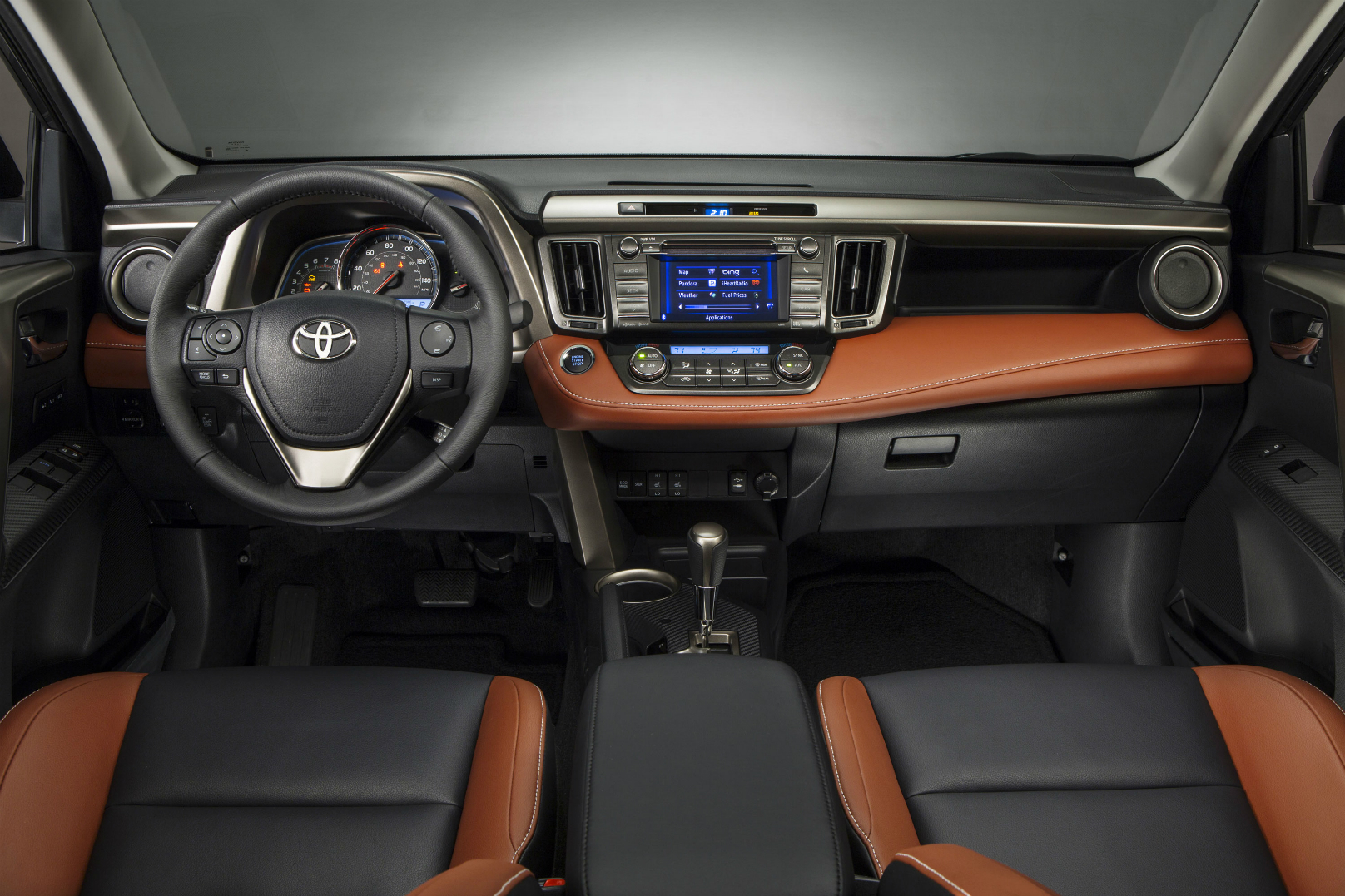 More troubling are reports of drivetrain vibration in 2013 models, reportedly related to the torque converter going bad. Dealers have been replacing them under warranty in small numbers (the 2015-2016 Honda CR-V has a more pronounced problem with drivetrain vibration).

Toyota is recalling certain 2014-2015 RAV4s, as well as 2015 Camry and Highlander models, because a component of the electric power-steering system may have been damaged during manufacturing. It could result in spontaneous failure of the system while driving, which can increase the risk of a crash.

Other concerns include mouldy air conditioners, broken radios, easily chipped paint and early rust. The door design seems to accumulate dirt and slush at the bottom, which may accelerate the process. There are reports of rodents chewing on wiring, which can be an expensive repair. Apparently, mice find the soy-based wire sheaths tasty.

Despite these setbacks the RAV4 is a worthy choice, especially as a used-vehicle purchase. Carcomplaints.com gives this Toyota its “Seal of Pretty Good” approval and we concur. Mice aren’t the only ones to find the RAV4 appetizing. 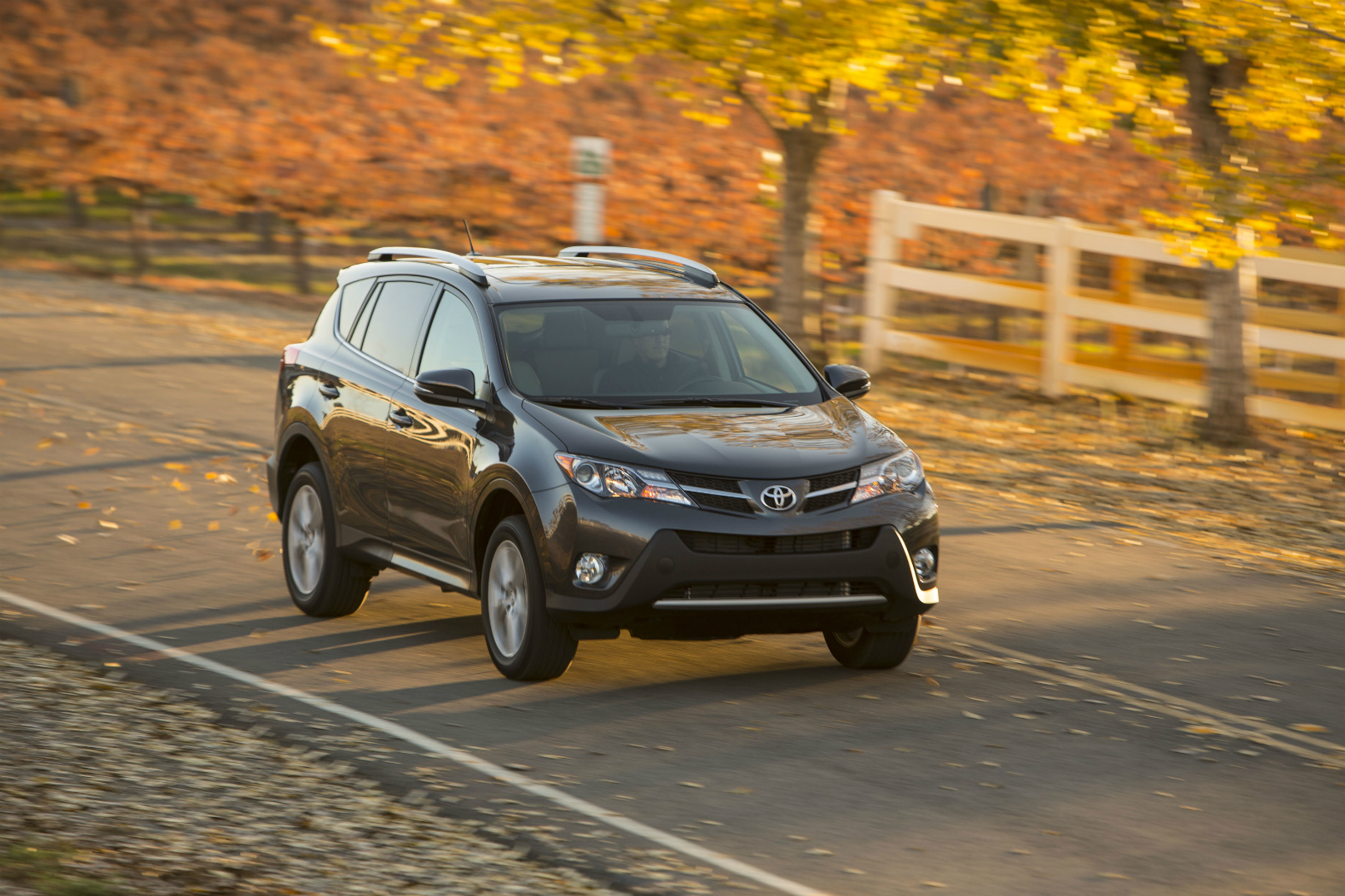