The only thing that could ruin its shapely profile is some duct tape or bungee cords holding the doors together.

“My son tried to close the back door behind the driver side and it would not shut. There was a police officer there who tried to help; they got duct tape and closed it,” one hapless Fusion owner wrote online.

Turns out the second-generation Fusion is known for letting its doors flap open, sometimes at speed. Swinging doors have hit parked cars (any unexplained damage to your own?) and spooked families along for the ride.

“While making a right turn, the passenger rear door flew open. Luckily, our child was sitting away from the door,” reads a not uncommon post. Other kids have been pressed into service, gripping the door while mommy searches for a dealership.

The hijinks caught the attention of the U.S. National Highway Traffic Safety Administration, which forced Ford to recall the Fusion and other models for faulty door-latch pawl springs. The automaker is spending $640 million (U.S.) to replace door latches on nearly 2.4 million vehicles.

Faulty door latches are just one of the issues buyers of used Fusions have to keep in mind. Read on.

When Ford and Mazda went their separate ways in 2010, Ford was free to design its next Fusion on a blank slate (or CAD monitor), and resisted carrying over any part of the old car’s Mazda-derived, front-drive platform. The previous double-wishbone front suspension was reduced to simpler MacPherson struts. And despite gaining a 12-cm longer wheelbase, the new car didn’t provide much more rear-seat legroom.

No matter. The Fusion is comfy up front where the buyer spends all of his or her time. The driver’s seat is highly adjustable, to fit all shapes and sizes, and very supportive. The dashboard and centre console are cleanly designed, although the look comes across as a little stark, especially in the carbon-black interior hue stylists seem to favour.

The MyFord Touch system is new to the Fusion; the improved interface permits voice commands for various audio, phone and navigation functions, as well as touch controls and buttons on the steering wheel. Still, users face a steep learning curve and the system is prone to frustrating glitches.

Under hood, the previous 175-hp 2.5-L four cylinder lived on as the base engine, lashed to the same old six-speed automatic transmission. A Ford-GM project, this conventional autobox is not related to the troublesome dual-clutch automatic found in the Focus and Fiesta models.

There were two engine options for 2013: a 178-hp 1.6-L turbo four that could be bundled with a (rare) six-speed manual gearbox, and a 240-hp 2.0-L four that offered 270 lb-ft of helpful torque (the V6 option was no more). All-wheel drive was available in the top-drawer Platinum trim.

The U.S.-based Insurance Institute for Highway Safety gave the Fusion the highest possible rating of Good in its frontal-offset, side and roof strength crash tests.

For 2014, the Fusion gained an optional 1.5-L turbocharged four-cylinder engine, good for 178 hp and 177 lb-ft of torque – almost identical to the 1.6-L turbo. Why? Turns out this world car with the 1.5-L engine is eligible for tax breaks in China, so it was made available to everyone.

The 2014s also got some newly available features, including inflatable rear seatbelts (a Ford innovation), a heated steering wheel and ventilated front seats. The rearview camera became standard issue in 2015, while the manual gearbox quietly disappeared.

Given its sturdy foundation, the Fusion impresses with its quiver-free body, quiet composure and smooth ride (the long wheelbase helps in that regard). The power steering system is electric, but it’s quick (2.7 turns lock-to-lock) and better than most in terms of feedback and accuracy. As a result the handling is responsive, more Germanic than most any American car out there, including GM’s Opel-designed models.

Despite the embarrassment of riches in terms of powerplants, the Fusion goes down the road like virtually every other mid-sizer; that is, not very quickly. The base 2.5 and the 1.5 and 1.6-litre turbo fours all provide similar acceleration numbers, taking about 8 seconds to attain 0-97 km/h – an entirely ordinary result.

The lone exception is the 2.0-L EcoBoost turbo four; its 240 hp and robust torque inject some athleticism, pulling the sedan to highway velocity in 6.9 seconds, comparable to the old V6-powered model.

Where the Fusion disappoints, unfortunately, is at the gas pump. Ford’s newfound reliance on turbocharged engines to hit escalading government fuel-economy targets may be working for regulators, but consumers openly question Ford’s lofty economy ratings.

“Getting a combined mpg of less than 25 (11.5 litres/100 km) is simply not okay for a modern car with a four-cylinder engine,” one Fusion owner griped online. Turbo engines can be frugal with a light throttle (ideal for government dyno tests), but real-world driving frequently requires mashing the pedal, as owners have discovered. 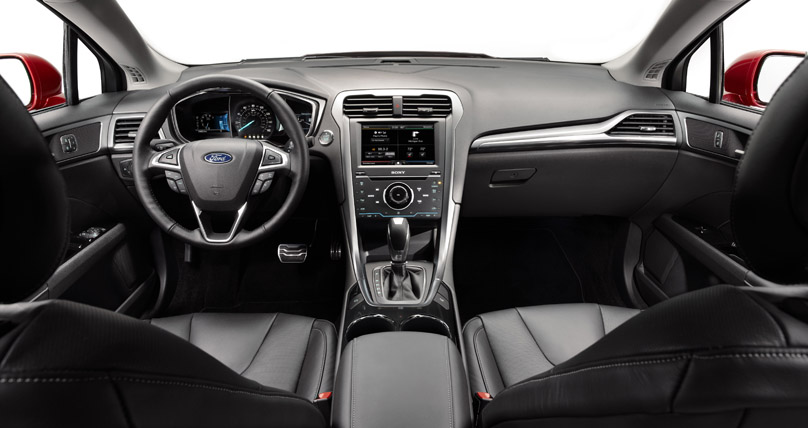 Provocative styling, loads of refinement and world-class technology have contributed to one pretty exciting mid-size package, owners agree, although the promised performance and fuel savings are more marketing bluster than reality.
The big issue for many shoppers is reliability, especially when contemplating a three-year-old lease return with little or no warranty remaining. Beyond the upsetting flying door situation, there’s a number of mechanical weaknesses that shoppers should consider.

Owners report the six-speed automatic transmission can exhibit jerky, hard shifting. Abrupt downshifting by the transmission, especially at highway speeds, has unnerved drivers. Dealers often reprogram the autoboxes, but some transmissions have been replaced outright.

The British-made 1.6-L EcoBoost turbo four is known for overheating and, reportedly, there have been some engine fires in both the Fusion and Escape models that use it.

The electric power-steering system can fail, leaving the driver to steer the car manually – a scary prospect for unprepared motorists. Ford says bolts on the steering gear motor can rust out, crack and disable the power assist (this is a recall item).

If you’re enamoured with the Fusion’s comely lines, the best bet is to find one with the conventional 2.5-L four cylinder engine.

You may also like: Top 9 features on the 2017 Ford Fusion