Released for 2012, the fourth-generation CR-V was built on a front-drive platform shared with the diminutive Civic to keep weight in check.

“My teeth are shaking, dad.”

Five-year-olds say the darnedest things. Fortunately or unfortunately, children can utter the unvarnished truth when adults can’t bring themselves to acknowledge bad news. Say, like when your car is vibrating to bits.

“I’m near nauseous at every stoplight I find myself at. I look over at the passenger seat, which is shaking madly, which means that the driver’s seat I’m sitting on is also shaking,” observed the unhappy owner of a 2015 Honda CR-V.

Turns out the most popular crossover on your street – of which Honda sold more than 4 million copies since its inception in 1997 – may have a bad case of the shakes. Who knew? Well, ask the kids.

Released for 2012, the fourth-generation CR-V was built on a front-drive platform shared with the diminutive Civic to keep weight in check. Despite the hand-me-down (up?), 65 per cent of the basic structure was new, including additional bracing around the back to ensure a sturdy foundation from which the suspension could do its work.

The 2012 models are instantly recognizable by their smooth front fascias, having corrected the unsightly underbite that made the previous CR-V hard on the eyes. The width and wheelbase remained unaltered, while the trucklet lost about an inch (2.5 cm) in height and length. 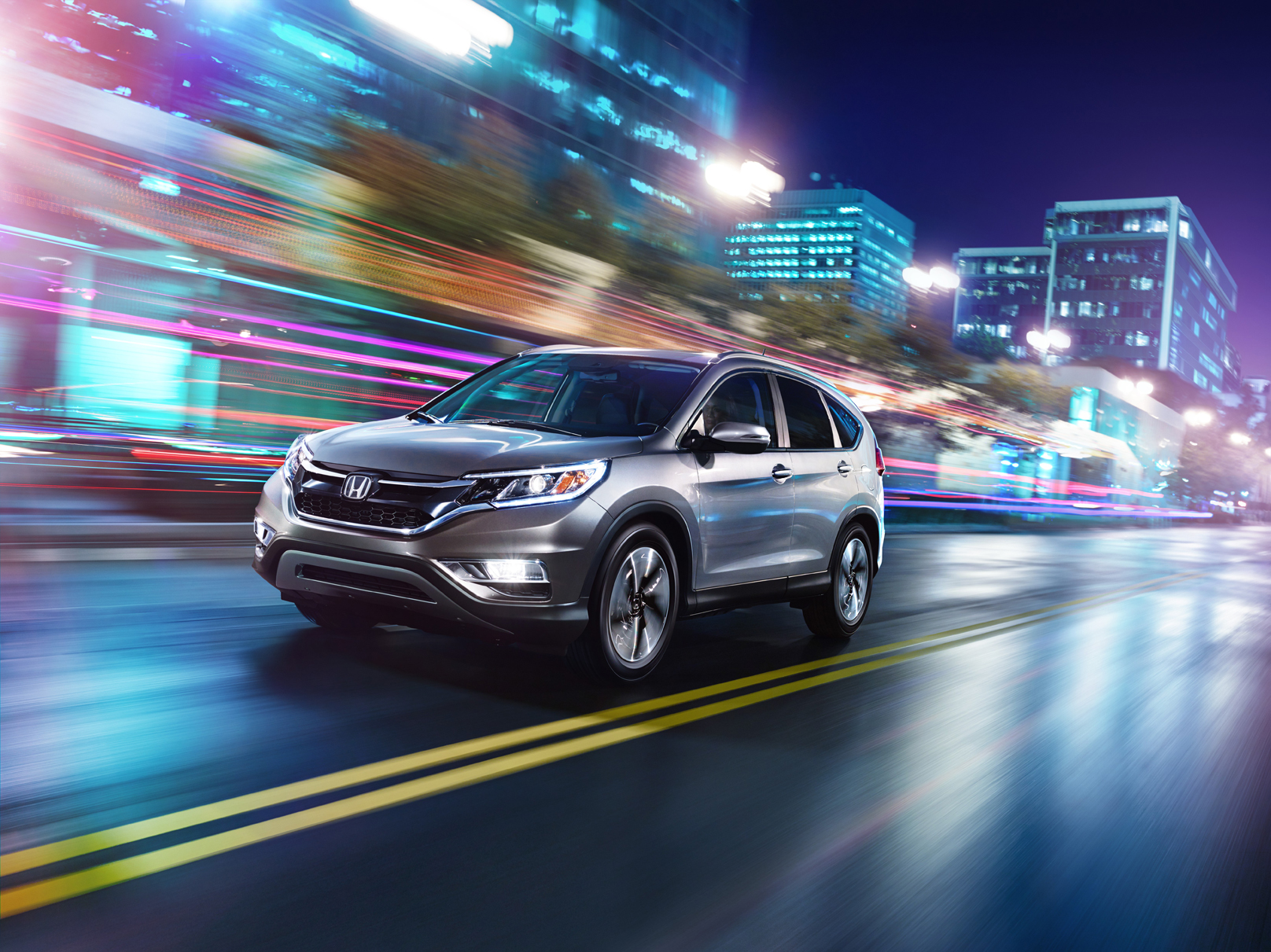 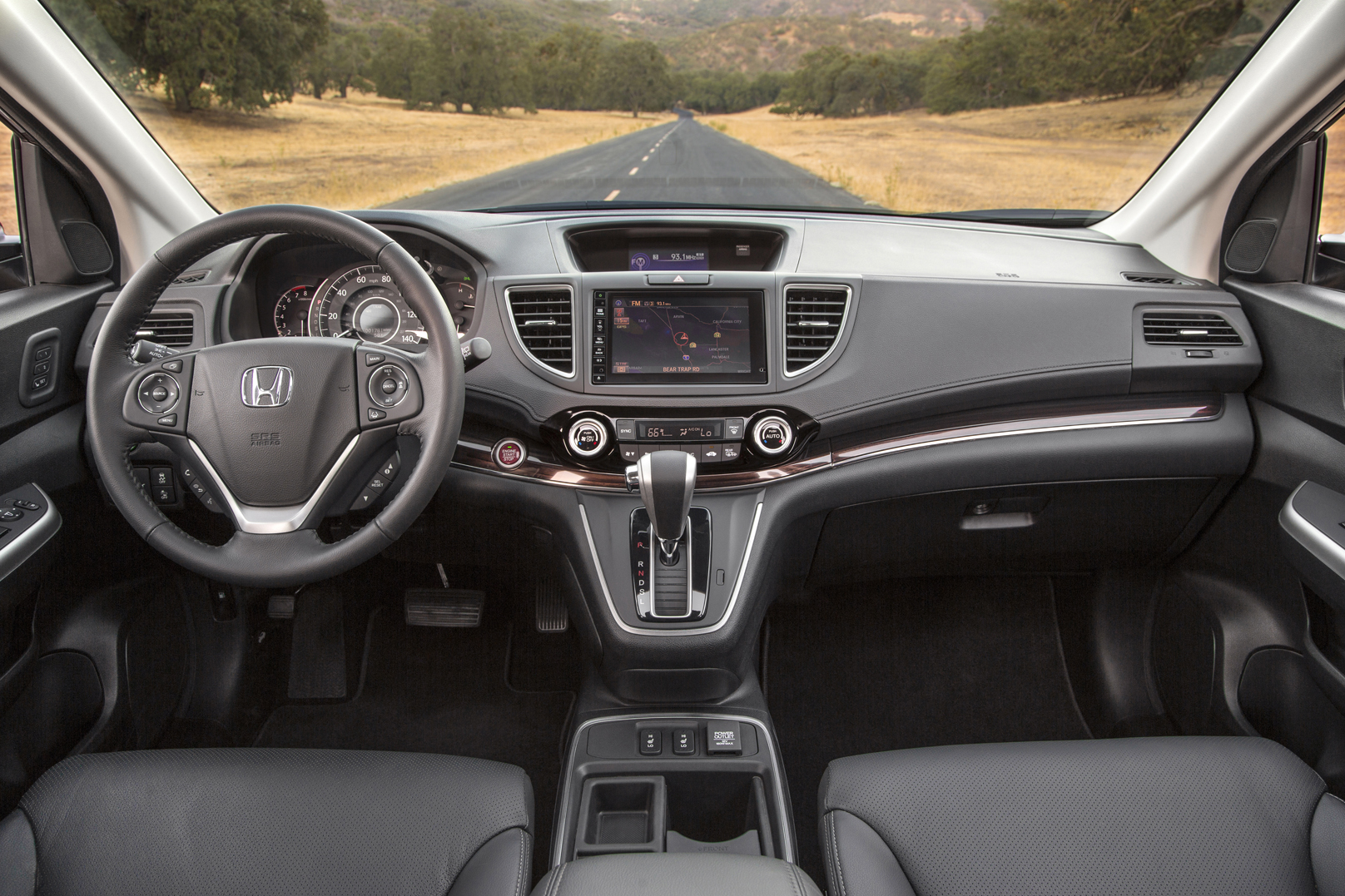 Inside, legroom was virtually unchanged, while cargo capacity actually increased a smidge. The CR-V has long been an accommodating conveyance for five people; some scribes have compared the generous space to that of a minivan (take it as a compliment). The floor at the split-folding rear bench is flat, which means occupants don’t have to play awkward footsies to avoid the hump.

The pleasing interior had shifted upmarket. Most models came with two display screens, although the graphics were oddly pixelated. The cabin was airy and inviting with its tall seating and great sightlines. Unlike the rival Toyota RAV4, there were no third-row jump seats to steal precious space. However, some owners disliked the CR-V’s firm chairs and intrusive headrests.

“The headrest pushes my head forward into a very uncomfortable position. After 1.5 hours’ drive, my neck hurts for five days,” one driver protested online. The headrests, designed for better whiplash protection, did not win over a minority of owners. Definitely try before you buy.

Making a return engagement was the aluminum 2.4-L DOHC four cylinder “K-series” engine – a model of durability that’s powered millions of Hondas since 2001. This version boasted a 5.4 per cent reduction in internal friction and a more efficient alternator, yielding better output: 185 hp and 163 lb-ft of torque. There’s no six-cylinder option – a constraint that was soon adopted by many of the CR-V’s competitors.

Also returning was the conventional five-speed automatic transmission, updated with lower-friction mechanicals and low-viscosity fluid to boost efficiency. A wider gear ratio goosed the CR-V’s fuel-economy ratings a little, too.

Newly installed was an “Econ” button that dulled throttle response for even better fuel efficiency. Think of it as the Killjoy button, given its ability to squelch anything that resembles acceleration. All-wheel-drive models got a new electronically controlled rear differential that was lighter, more efficient and responded quicker than the old hydraulic setup.

The restyled 2012 CR-V was so well received that Honda didn’t feel the need to update it until 2015. New headlamps, daytime LED lights, grille and bumpers lent a more expensive look, while soft-touch plastic on the instrument panel, a rear air vent and more sound insulation spiffed up the cabin.

More significantly, the 2015 models received an updated drivetrain pinched from the Accord sedan. The “Earth Dreams” direct-injected 2.4-L i-VTEC four-cylinder made the same 185 horsepower as its predecessor, but peak torque was up 11 per cent to 181 lb-ft at a more accessible 3900 rpm. It offered more vroom from the same displacement.

The engine was tied to the Accord’s continuously variable (CVT) automatic, which relied on a torque converter between the transmission and the engine to give the CR-V normal-feeling takeoff. Significantly, the CVT is Honda’s own design and not an off-the-shelf unit supplied by Nissan’s Jatco division. Suspension tuning rounded out the changes for 2015. 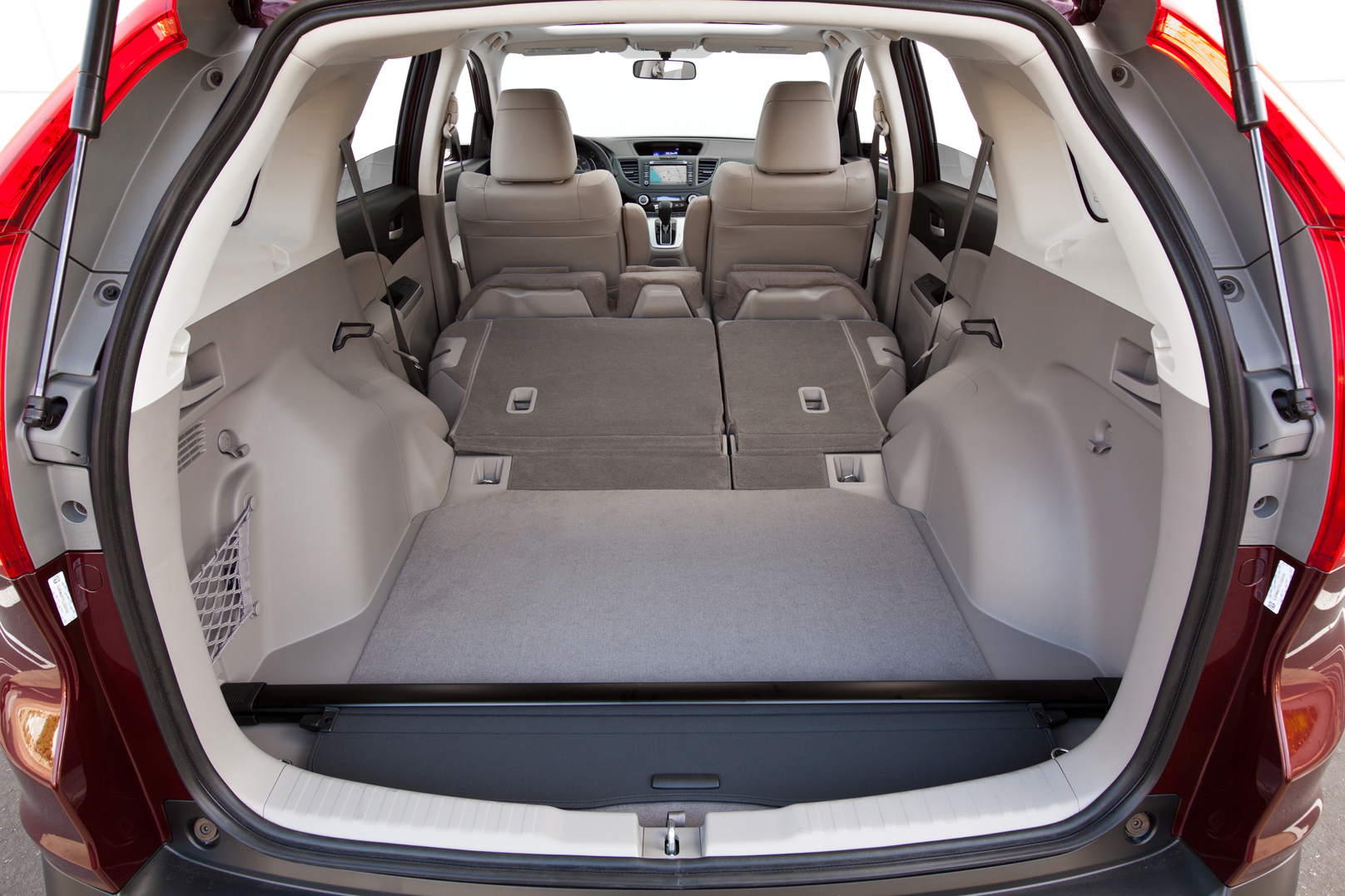 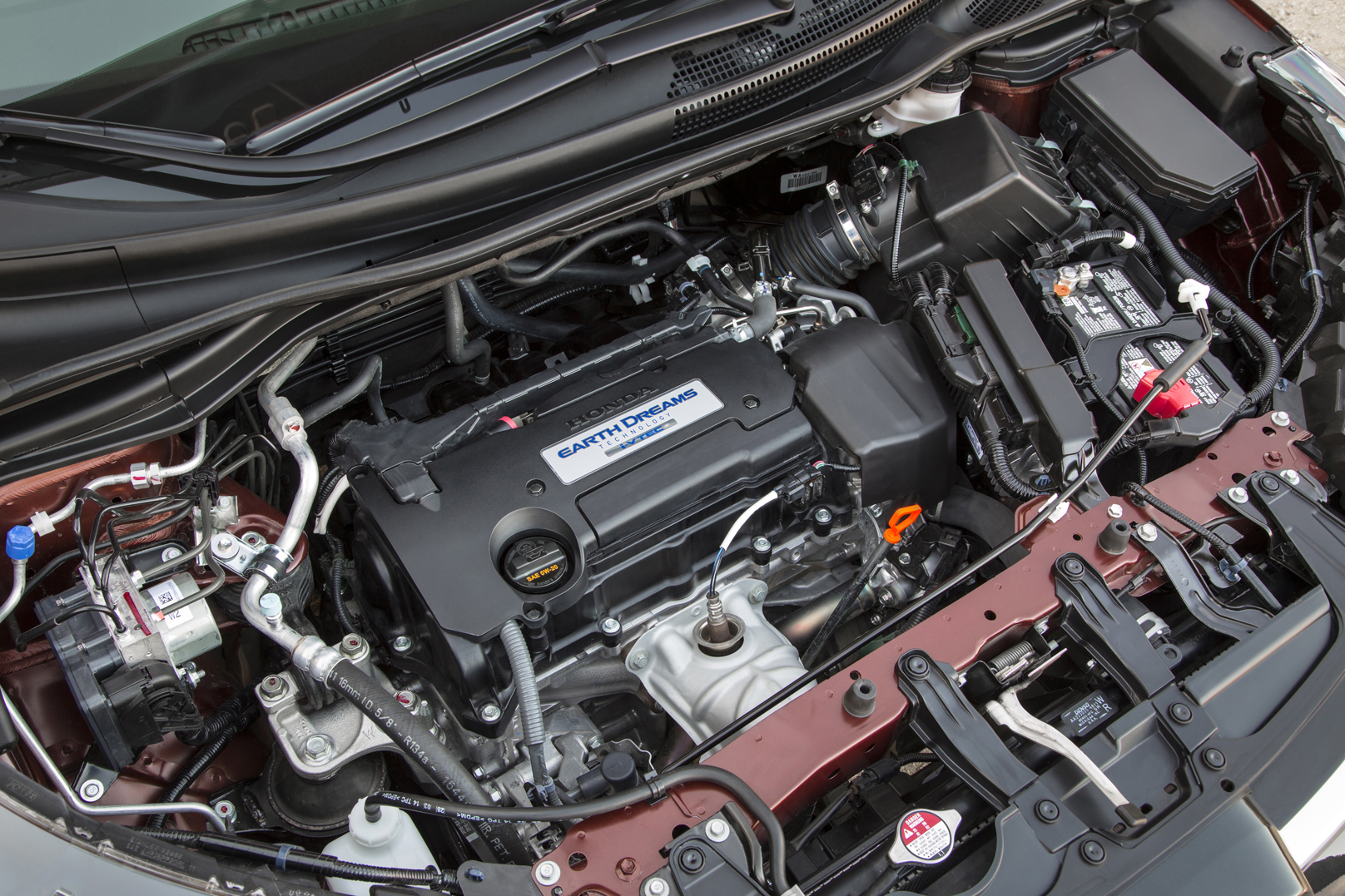 Surprisingly rewarding to drive, the CR-V offered the nimbleness of a Civic and the sturdiness of a full-bodied Pilot sport-ute. The ride quality was firm but rarely jarring; it remained planted on pockmarked roads and nicely damped. If there’s a weakness to speak of, it’s the electric steering system, which felt a little remote and disconnected.

Some drivers were disappointed with the mandatory four banger, which, while smooth and refined, felt underpowered at times. Zero to 97 km/h came up in 8.6 seconds in the 2012 AWD model, while the direct-injected engine in the 2015 made it slightly fleeter at 8.2 seconds (front-drive models could do it in 7.5).

At least the popular crossover was no longer a noisy blender on the highway. Engineers had stuffed enough insulation inside to make the 2012 and newer models significantly quieter than the previous-gen CR-V. Amen to that.

Perhaps the biggest draw is the CR-V’s penchant for sipping gas and making fuel economy numbers that can top the government ratings (with a light right foot). Expect to average around 9.0 litres/100 km (31 mpg) in mixed driving, especially with the CVT-equipped 2015-16 models.

The CR-V is Canada’s favourite “import” crossover for a bunch of compelling reasons: great road manners, roomy interior, fuel-efficient drivetrain, quiet comportment and that lightness of being for which Honda is famous.

Dependability is another CR-V strength, although a deep dive into owners’ experiences online can reveal some significant warnings used-vehicle shoppers need to heed.

The vibration issue noted off the top is indeed a deal-breaker for some buyers. It appears that the direct-injected Earth Dreams engine can be a nightmare for people who are sensitive to vibration.

“It’s been vibrating since I got the car. I am embarrassed to have people in my car, for when I stop at a light it vibrates like hell,” reads a blunt assessment. The affliction impacts 2015 CR-Vs mostly, though some 2016 owners have also reported the shakes.

Honda came up with a three-pronged approach (TSB 15-046) that addressed a lot of the complaints, though not all of them. The fix included installing new lower radiator cushions, a new transmission mount and front head restraints, as well as a tailgate damper. A software update to the engine management computer reportedly changed the idle speed.

Owners of 2012-14 CR-Vs don’t have the shakes, but there’s no shortage of gripes. Chief among them is a short-lived battery. Apparently the vehicle’s charging system output is insufficient when making short trips, so the battery often expires early. Budget for frequent replacements. Dim headlights may be a symptom of this weak charging system – lots of owners have complained about inadequate lighting.

Another concern is the VTC actuator, a component of Honda’s i-VTEC valve-timing system. Plenty of drivers have reported a loud grinding or rattling noise from the engine for a few seconds during a cold start. Honda has issued a service bulletin and will replace the actuator if pressed.

Still others talk about a clogged heater core, which typically won’t allow the driver’s side of the windshield to defog, but emits heat on the passenger side. Dealers can descale the core using a solution, but if it fails, a new heater core is an expensive proposition since it means dismantling the entire dashboard.

Other mechanical flaws include electric power steering that can intermittently fail while driving (reported in small numbers), faulty air conditioners and tire-pressure monitors, some hesitating transmissions and a few CVTs that have given up the ghost.

Overall, the Ontario-built CR-V is a highly touted family vehicle that’s exhibited a bunch of positive traits and a few not-insignificant faults. Yet there are enough happy buyers to make it a resounding success – just go into the relationship with your eyes open. 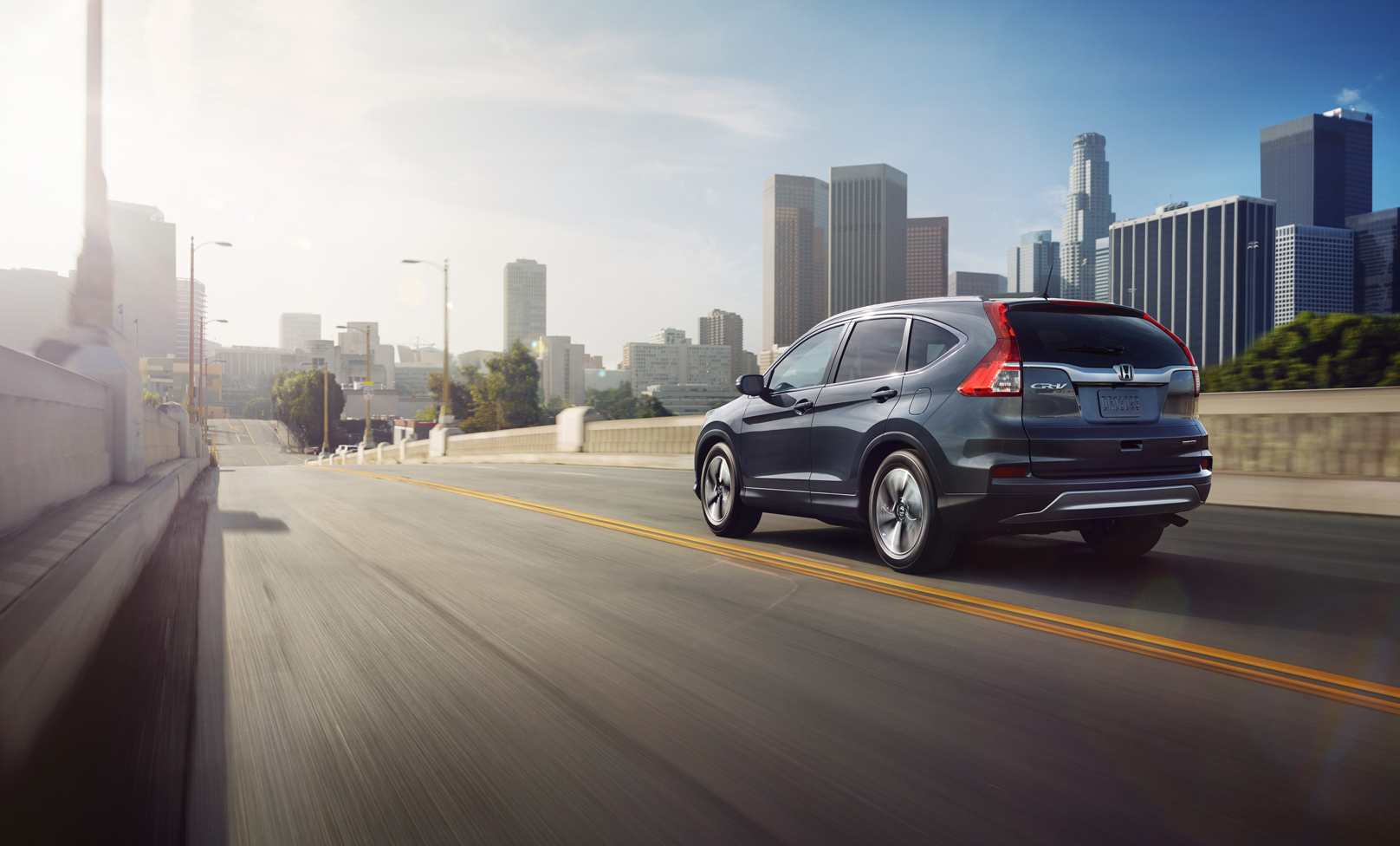