Benz E-Class respects the past while speeding into the future

Already a very good car, the updates cement the E-Class’s position as Canada’s segment leader; some massaging in usability would inch it even closer to perfection.

LISBON, PORTUGAL — Avenida da Liberdade in downtown Lisbon is an artful meld of old and new. The 10-lane boulevard houses traditional Portuguese pavement tile mosaics, cobblestone alleyways, and classic architecture that hearkens back through more than 2,500 years of history, yet the multi-lane traffic thoroughfare is modern and lined with shops selling the world’s finest luxury brands.

The same can be said of the new Mercedes-Benz E-Class sedan, the reason for our visit to one of Europe’s oldest cities. While it now enters the 10th generation of the official E-Class designation that debuted in 1993, the first executive sedans in the company’s lineup date back to the 1960s.

There are four areas in which the new E-Class is set to excel.

The first is in the technologies that move Mercedes-Benz closer to autonomous driving. The optional drive pilot system adds adaptive cruise control that now works up to 210 km/h — far beyond Canadian practicality, in other words — and can also keep the car in its lane on the freeway through straight lines and moderate curves.

It can even change lanes for you on the freeway, detecting obstacles and moving only when the way is safe. At first I found this sensation completely unnerving, especially with my hands off the wheel, but if we’re moving toward letting our cars drive for us, then we’ll all need to get used to it before long.

However, these features appear to be tied to the speed limit detection system, which might leave Canadians less inclined to use them on 400-series highways where 100 km/h is regarded more as a suggestion.

There’s also a new twist to Mercedes-Benz’s optional active parking assist system: you can now climb out of the car and manoeuvre it remotely using a smartphone, allowing it to squeeze into even tighter spaces since the doors won’t have to open.

The second key advancement is in an array of new safety features. The standard active braking assist now activates if you don’t slow down while approaching stopped traffic and can completely avoid a collision from up to 100 km/h.

There are also two new additions to the optional Pre-safe Plus suite: a function that detects an imminent crash and plays interference through the car’s sound system to prepare the inner ear and reduce hearing damage, and another that detects an incoming side impact and uses the seat’s inflatable bolster to bump the driver out of the way and lessen the collision’s force on the body.

The third comes through advancements in infotainment and connectivity. In the new E-Class, the instrument cluster and infotainment screen can now be combined as an option. While they’re actually two separate 12.3-inch screens, they can be mounted together to make the dashboard look like one massive integrated tablet. Though the steering wheel and my hands got in the way at times, the three selectable instrument layouts got around the problem nicely.

A smartphone charging pad and integrated Apple CarPlay and Android Auto functionality complete the package nicely. Don’t be surprised if copycat designs start appearing before long. This could well be a preview for the future of automotive interiors.

And finally, when you choose to shut all these systems off and focus on a great drive, the E-Class sedan will be waiting. Its drive feel has all the poise and refinement that one would expect from a car with many decades of German engineering behind it. 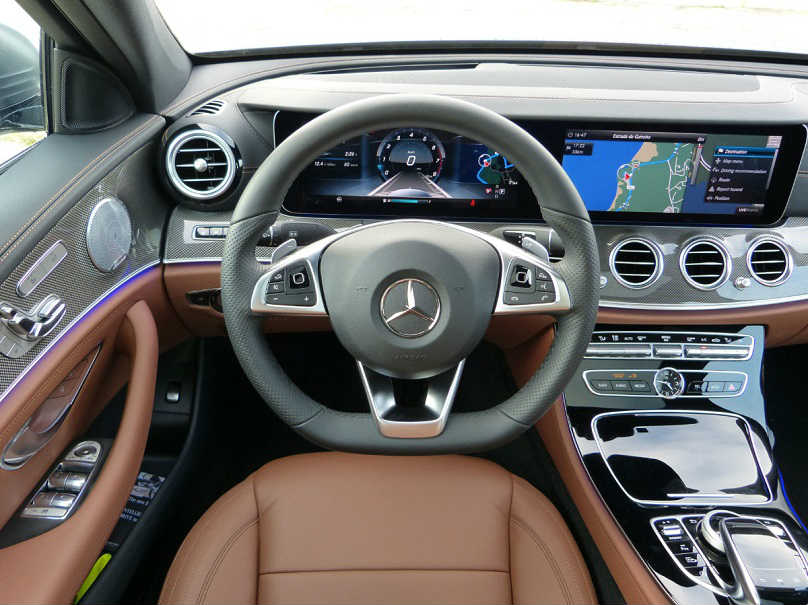 Though the current E-Class sedan lineup in Canada is diverse and the global 2017 lineup has some intriguing offerings — including a new four-cylinder diesel engine and a plug-in hybrid — we’ll only receive two models at launch, the E 300 (arriving in June/July) and E 400 (arriving September/ October).

Both are 4Matic, so we still get no rear-wheel drive, though this is arguably not a car for which many people in Canada would seek it out. An AMG and a V6 diesel version can be expected not terribly far down the road — possibly for the 2018 model year — and the hybrid might grace our shores if consumers express enough of an interest.

The E-Class boasts a world-first feature: tiny steering wheel mounted touchpads that replace toggle buttons for easier use while driving. I love the idea in concept, but on two separate occasions I inadvertently reported non-existent accidents while trying to zoom in the navigation map. Perhaps they just take some time to get used to, or perhaps they could use a bit of sensitivity tweaking.

The navigation system in the E-Class continues to be frustrating at times. It seems to be off by about 200 metres, which led me and some of my colleagues to second-guess some turns and get entwined in downtown Lisbon traffic.

But this one is not the automaker’s fault: while the rest of the world will get a spiffy new multibeam headlight system with 84 individually and electronically controlled LEDs, our government won’t let us have that. Our cars will ship with run-of-the-mill headlights instead.

It’s rare to have a what-were-they-thinking moment with Mercedes-Benz. A new interior accent lighting system can project 64 different colours throughout the cabin — everything from hot pink to lime green or electric blue.

This works in some cars — the far edgier Ford Mustang comes to mind — but it cheapens the brand somewhat to give people the freedom to make their upscale executive sedans look like gaudy Vegas limos. This feature’s only redeeming quality is that you can set it to white and forget it.

Exterior design changes are very subtle, which is perfectly fine for a sedan as classic as this one. And if you really want to pay homage to its past, the three-pointed star hood ornament is still available by special order.

ADD-ONS: To be announced

ACCESSIBILITY: Average for the segment; getting in and out of front seats is difficult when they’re pushed forward but back seats are good

COMPETITION: A new generation of the BMW 5-Series (starts at $60,500) has been spied in on-road testing and may be revealed late this year. The Audi A6 (from $56,900) just received a mid-cycle update last year and may therefor take more time to catch up in safety and interior design.

LOOKS: Updated only subtly, which is a good thing

INTERIOR: Very nice, especially with open-pore wood grain and the integrated twin 12.3-inch screens — but the accent lighting is very much a matter of taste

PERFORMANCE: Stout without being overwhelming; comfortable with plenty of power on tap when it’s needed, kept in control via the five-mode Dynamic Select feature

TECHNOLOGY: Impressive and extensive; some of the drive assist features will take some time to get used to, but they take Mercedes-Benz another step closer to true autonomous driving

RATING: Already a very good car, the updates cement the E-Class’s position as Canada’s segment leader; some massaging in usability would inch it even closer to perfection.

Freelance writer Stephanie Wallcraft is a regular contributor to Toronto Star Wheels. For this story, her expenses were paid by the manufacturer. To reach her, email wheels@thestar.ca and put her name in the subject line.