The 2017 Chrysler Pacifica was rolled out in Newport Beach, CA to our group of winter-weary Canadian journalists (and their kin) in what would be a proper test of this all-new model, not to be mistaken for the crossover that left showrooms in 2008.

NEWPORT BEACH, CA: Until now, I haven’t been a fan of the van.

I’ll agree there’s nothing else on earth that, with the pull of a few straps, can morph to any challenge: ferrying sports teams, separating warring siblings, transporting tipsy wine tourers – or hauling two adults and a whopping stack of drywall.

The minivan is the Swiss army knife of vehicles, and on practicality alone, it should be feeling more love. Unfortunately, nobody has been able to fix its “mom’s taxi” styling. And no, the stick-figure families don’t help.

On that note, I brought my own family for the launch of what I’d hoped would be a renaissance of this useful, but dreary domestic hauler.

The 2017 Chrysler Pacifica was rolled out in Newport Beach, CA to our group of winter-weary Canadian journalists (and their kin) in what would be a proper test of this all-new model, not to be mistaken for the crossover that left showrooms in 2008.

What I mean by ‘proper’ isn’t putting the Pacifica into the hands of enthusiasts who would tear up and down the nearby canyon roads, and then whinge about the driving dynamics it was never meant to achieve.

Although handling is pretty good.

No, FCA had provided an authentic southern California day-tripping experience where we’d make full use of the Pacifica’s long list of family-friendly features, gleaned from its 32 years in pioneering and leading the minivan segment.

Features you’ll find in the Grand Caravan and Town & Country that still own two thirds of the market – and some you won’t. 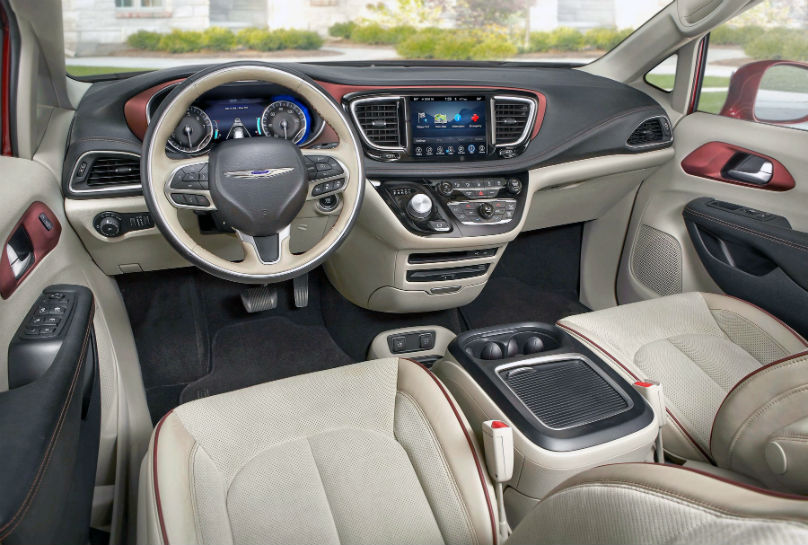 Let’s begin with the styling that isn’t simply a refresh of any FCA minivan.

My tester was a top-trim Limited model, rolling on 20-inch alloys (base vehicles get 17’s), with a long wheelbase and short overhangs to appear firmly planted.

Side glass looks long and uninterrupted between the A and C pillars. And what you won’t see riding atop Pacifica’s fashionably high beltline is the usual sliding door track beneath the rear window.

On some minivans, it sticks out like a canker. On Pacifica, it’s concealed.

This all-new ride may still look like a minivan, but didn’t make me feel like Clark Griswold among the Mercs, Bimmers and Audis the Newport locals were driving.

But a posh look comes at upscale dollars. Pacifica is replacing the pricey Town & Country, although the more budget-friendly Grand Caravan remains.

The latter item is handy.

Push the assist button and the front seats shift forward so you can lift the floorboards and drop the middle row. (L models get the driver’s side only, L Plus models get both.)

Just a few seconds to a flat cargo floor, or the fun of riding limo-style from the third row. My kids loved it, sitting with legs outstretched while gaming on the available rear entertainment screens.

Bump up to Touring-L Plus and you get upgraded 13-speaker audio, heated second-row seats and steering wheel, the bigger Uconnect 8.4-inch touchscreen, and some nannies like blind spot monitoring and park assist.

What struck me here wasn’t so much the choice of materials, but eye-catching colour palettes.

My beige seats were nicely framed in brown piping – a tone that was picked up in the door handle surrounds, instrument panel, and stitching throughout. The combo really popped.

On a more practical note, Limited trim also gets a built-in vac, with hose that’s long enough to suck up every goldfish cracker from bow to stern.

Power for all Pacificas comes from FCA’s proven 3.6-litre Pentastar V6, which in this vehicle claims best-in-class highway fuel economy of 8.4L/100 km – 12 per cent better than the outgoing model. It is mated to an uber-smooth, nine-speed auto with Jag-style rotary shifter on the floating centre console.

Handling is what impressed me more. 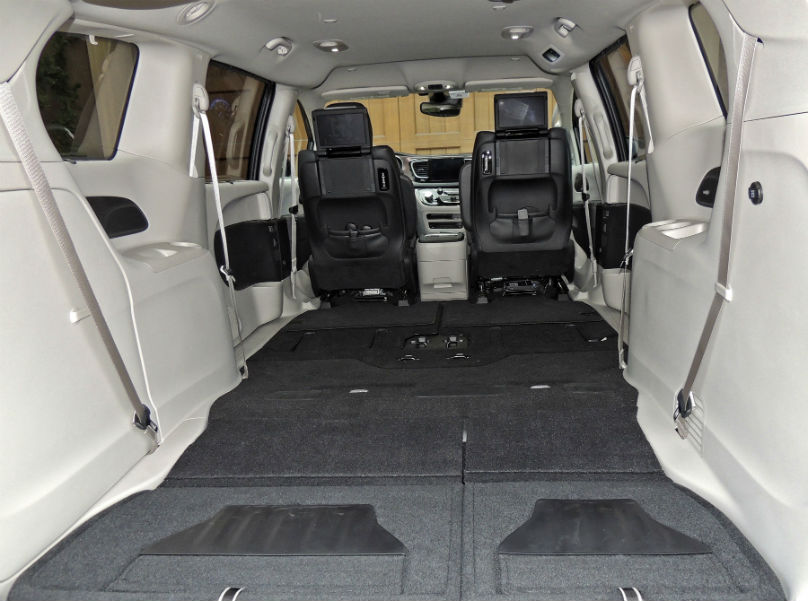 It was on our trip to the San Diego zoo, which should have only taken about 90 minutes, that I experienced Pacifica’s agility. Somebody had inadvertently set route guidance to “avoid freeways” sending us on a goose chase through the foothills around Lake Elsinore.

My daughter, who is easily carsick, couldn’t delight in the switchbacks and rapid drops in elevation, but I did appreciate the way Pacifica’s independent suspension diminished body roll without sacrificing on comfort.

Like any minivan, Pacifica shines at handling cargo. You get nearly four cubic metres and a flat deck without removing any seats – although eight-passenger models have one that doesn’t stow.

But our test was less about schlepping plywood than about fun family outings, with our ride hopefully maintaining the peace between feuding offspring. 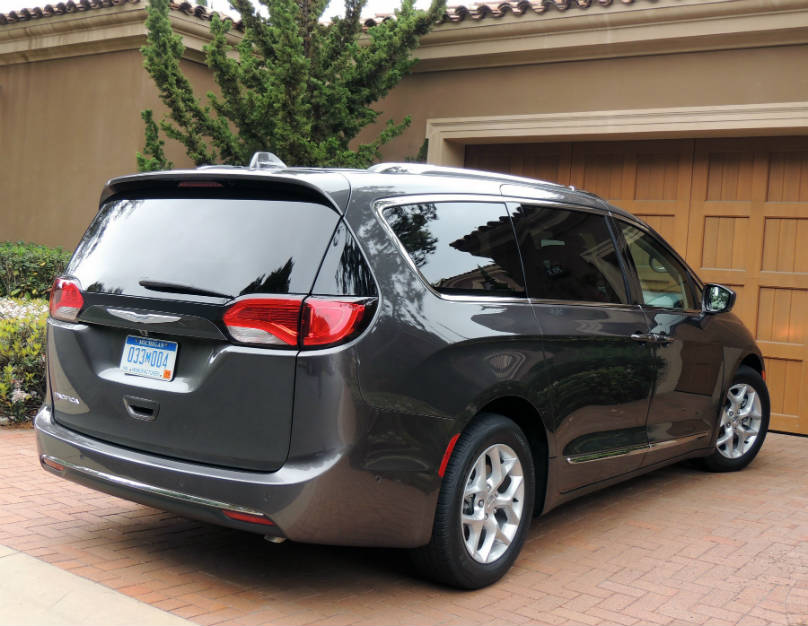 With the twin 10-inch touchscreens, a pile of apps (including one called ‘Are We There Yet’), and a heaping serving of family friendliness, getting lost in the desert and then jammed up in Orange County traffic didn’t upset my inner Feng Shui.

Pacifica may not sit at a price point that moves most minivans, but it has nudged my purchasing needle to the right of “no way.”

It hasn’t suddenly made the minivan sexy – nothing can – but if Pacifica can win over lukewarm buyers like me, I’m sure it’ll bring no shortage of new fans to the segment.

AVAILABILITY: expected to start arriving at dealerships in April