BMW's 2018 M760Li xDrive makes the perfect companion on the twisty autumn roads that meander through the Muskokas.

It’s quite amazing that a car like the 2018 M760Li xDrive exists today.

What with all that talk of governments mandating electric in the near future, and the decline in people who actually want to drive but would rather be chauffeured around autonomously.

Car enthusiasts like me are having a hard time these days talking to anyone about the joy of driving without them going into an instant coma. No one cares anymore.

Someone must. How else does a car company take the biggest engine they can find and then see fit to add on a couple turbochargers for even more power.

Whoever signed off on this engine, well, I need to shake their hand—or give them a high-five. As the 6.6 litre mono scroll, twin turbocharged V12 in the M760Li is a veritable middle finger in the face of CAFE restrictions and downsized engines.

And stuffing this bomb of a motor that could probably tow the moon, into BMW’s ultra-lux and gargantuan long wheelbase 7er seems a bit out of place. Owners of this type of car typically get driven around in serene comfort and it would seem most uncouth to be shoved into the back of the seat with the enormous 590lb-ft of torque that this V12 develops at a sleepy 1500rpm.

That torque figure is supplemented by an even more astounding 601hp. I’ll save you the time of googling this (you probably will anyways) but it is the most powerful powerplant BMW has produced—ever. It is also the fastest accelerating BMW ever. 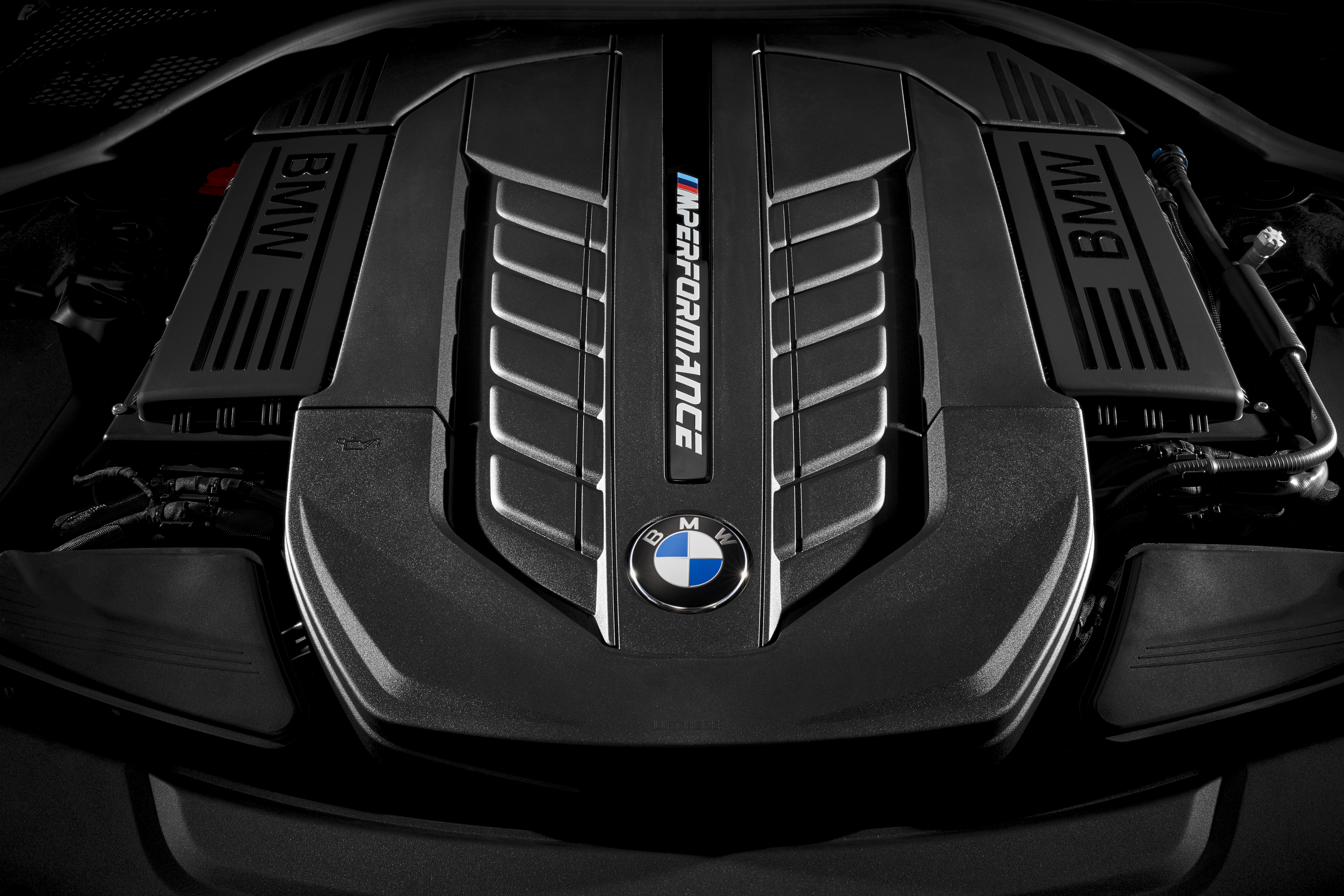 The effect straddled even to this 2326kg limo is unbelievable. Flooring the go pedal on this car is like ripping a hole through the fabric of time. The rear-biased xDrive no doubt aiding traction and catapulting this beast to 100km/h from a standstill in a mere 3.7 seconds. That number no doubt conservative as BMW’s numbers usually are. This is square in Viper ACR territory and quicker than a 700hp Hellcat.

Yet place the M760 in its default comfort mode, or my favourite comfort plus, and you have a car that is church quiet where power is metered in a linear un-obtrusive way. You are merely whisked along sipping on a buttery smooth endless well of torque.

NVH is a thing of the past. This is next level refinement.

I just can’t help but imagine what a motor like this could do in something exotic and mid-engined, kinda like that AMG V12 Pagani uses in his cars.

It actually doesn’t seem that far fetched, as it has been done before. Remember the McLaren F1? It was the fastest car in the world for over a decade until the Bugatti Veyron bested it. The F1 had a BMW V12 designed by engine genius Paul Rosche. It is probably the greatest V12 ever made and still immensely powerful by today’s standards all without the aid of forced induction.

The M760 comes fitted with xDrive and rear wheel steering, the latter aiding everything from cornering and high speed stability but also making it easier to take tight turns in parking lots or around town.

The effect is rather extraordinary. A car so big should not be so agile, but the laws of physics be damned, it totally is.

And Muskoka’s twisting and undulating back roads are a brilliant place to witness all this techno-wizardry in action. Doing this in fall is just icing on the cake. 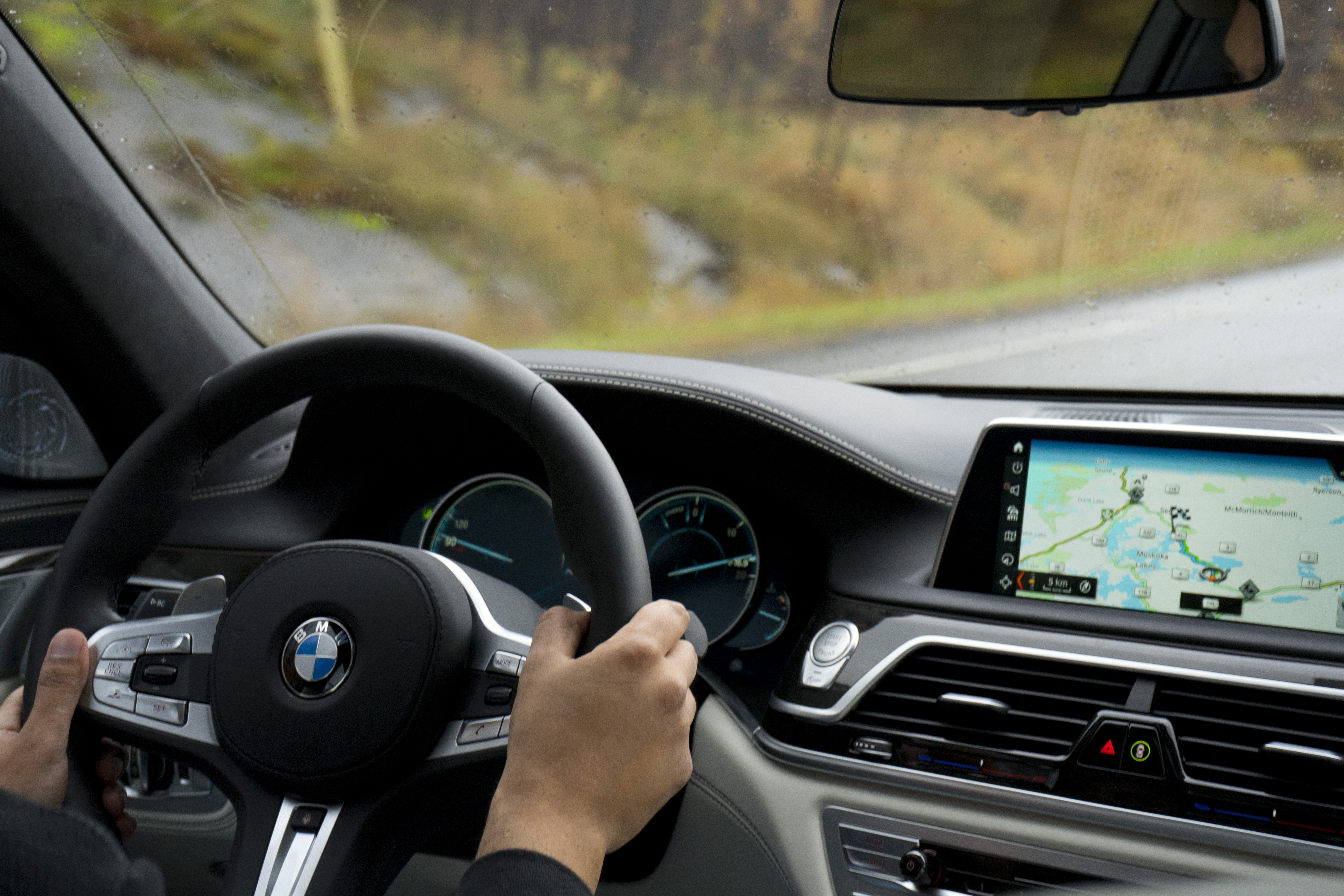 I love backroads and they are even better in a good car. This article helped me on my quest to discover what Muskoka had to offer, albeit it’s catered to bikers—we certainly share similar interests with our two wheeled brethren when it comes to seeking out good driving roads.

Setting off from Gravenhurst—and always wanting to check out the Muskoka Brewery in Bracebreidge—Muskoka Beach Road was a no brainer. It definitely did not disappoint.

The beautifully smooth and curvy asphalt is enveloped in a field of bright oranges and reds, the rain and grey skies adding to the character of the autumn painting I see through my windshield—this is a moment.

The steering while lacking a bit of feel is accurate and fast placing the giant sedan exactly where you want it. The grip is enormous with little protest from the Michelin Pilot Super Sports.

I discover Stagecoach road nearby, that is even more brilliant, with even tighter steeply cambered corners. 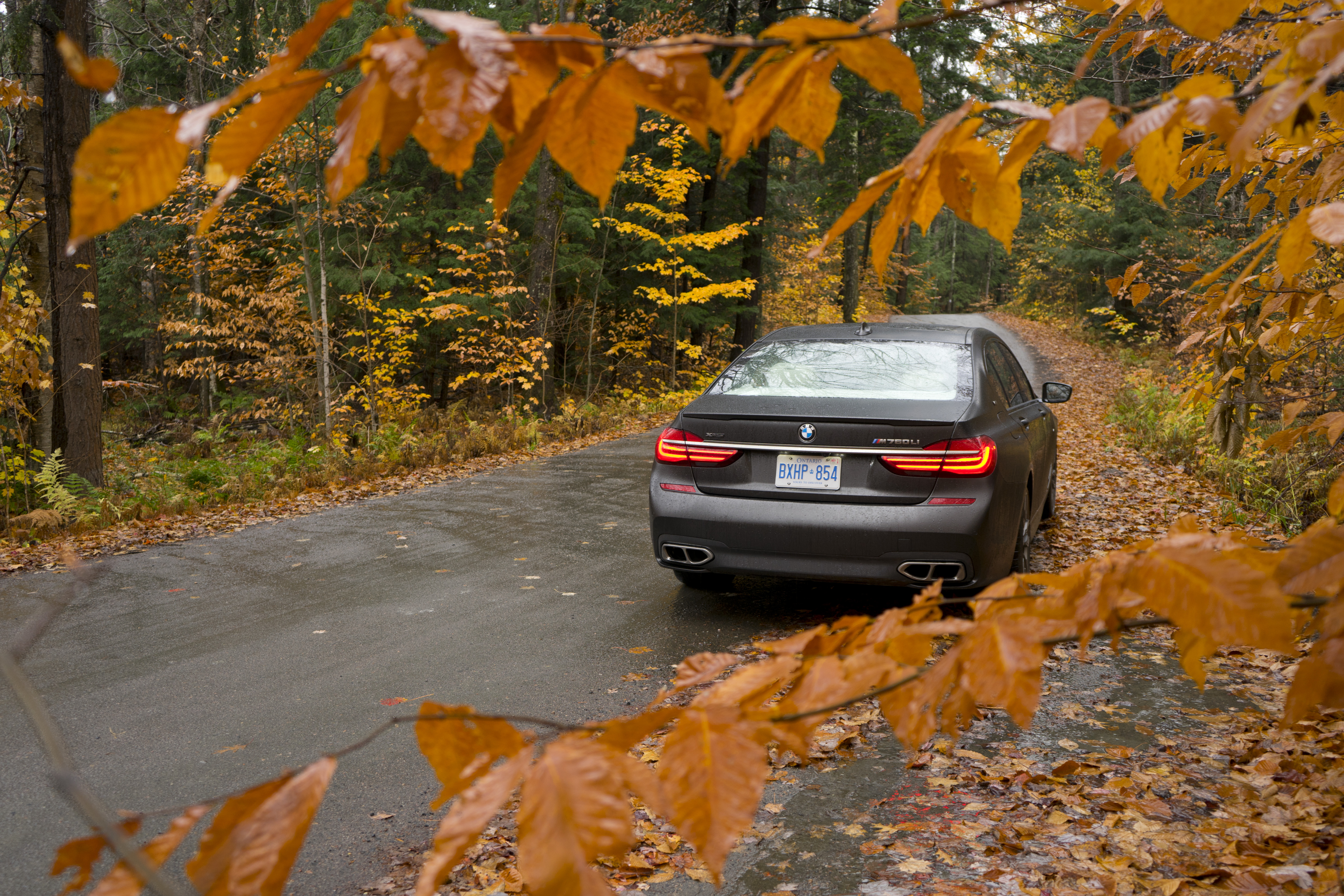 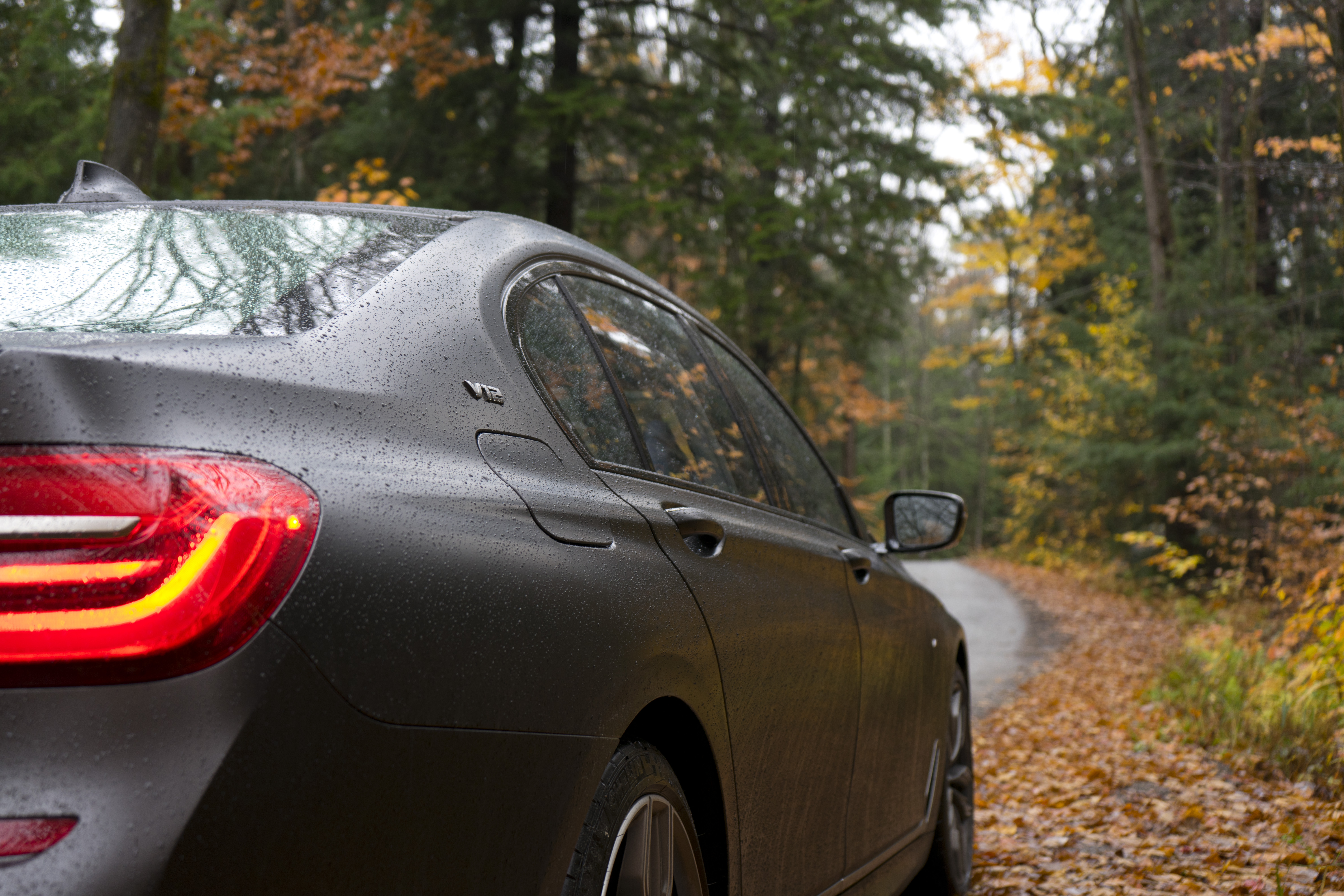 Also not disappointing is the M760 and its wall of torque, it feels natural here— the steering light and precise. The 2.2 tonnes of weight shrinking around you is the sign of a brilliant chassis. The sonorous V12 soundtrack is mesmerizing. Perfect.

All the electronics and driving aids are thankfully transparent and un-intrusive. This adds to the experience. Shifting your own gears in this car, which is possible by way of paddles seems unnecessary. The 8-speed ZF unit left to its own devices is phenomenal.

Sport Mode works well on these roads, and it’s only place I found where it felt right.

This car can completely demolish a back road.

But I slowed it down, because it’s good at that too and much appreciated by my rear passengers. Who might I add, were ensconced in all manner of creature comforts available on cars today. Adjustable lighting, two 9 inch screens controllable by a tablet mounted between the rear seats that are also heated, cooled and multi adjustable with massage.

The best seats in the house are in the back. This is car that you should be driven in. A point that I made sure to tell everyone I showed the car too. And everyone who saw it was awe struck. Awe struck at the 15,000 etchings that change colours selectable by that tablet. Is the sun’s glare too strong? No problem. With one touch all the rear sun screens, or just yours,  can be raised or lowered.

Entertainment? That’s covered too, with a mobile hotspot, aforementioned power tilting screens, connectivity for all your devices, a blu-ray player and a fanatastic albeit optional Bower and Wilkins Diamond Surround Sound System that is probably the best I have ever listened to in a car.

Then there is the party piece of the rear, or executive lounge as BMW calls it. One push of the door mounted button and the passenger side rear sear starts to recline while the front seat gets moved forward all the way and drops its headrest. A leg rest is then presented and allows the occupant to—well—travel like royalty.

It sure made anyone who sat back there feel like a royal. And when they got a bit too relaxed, a slight squeeze of the gas pedal into the thick carpet woke them right back up. 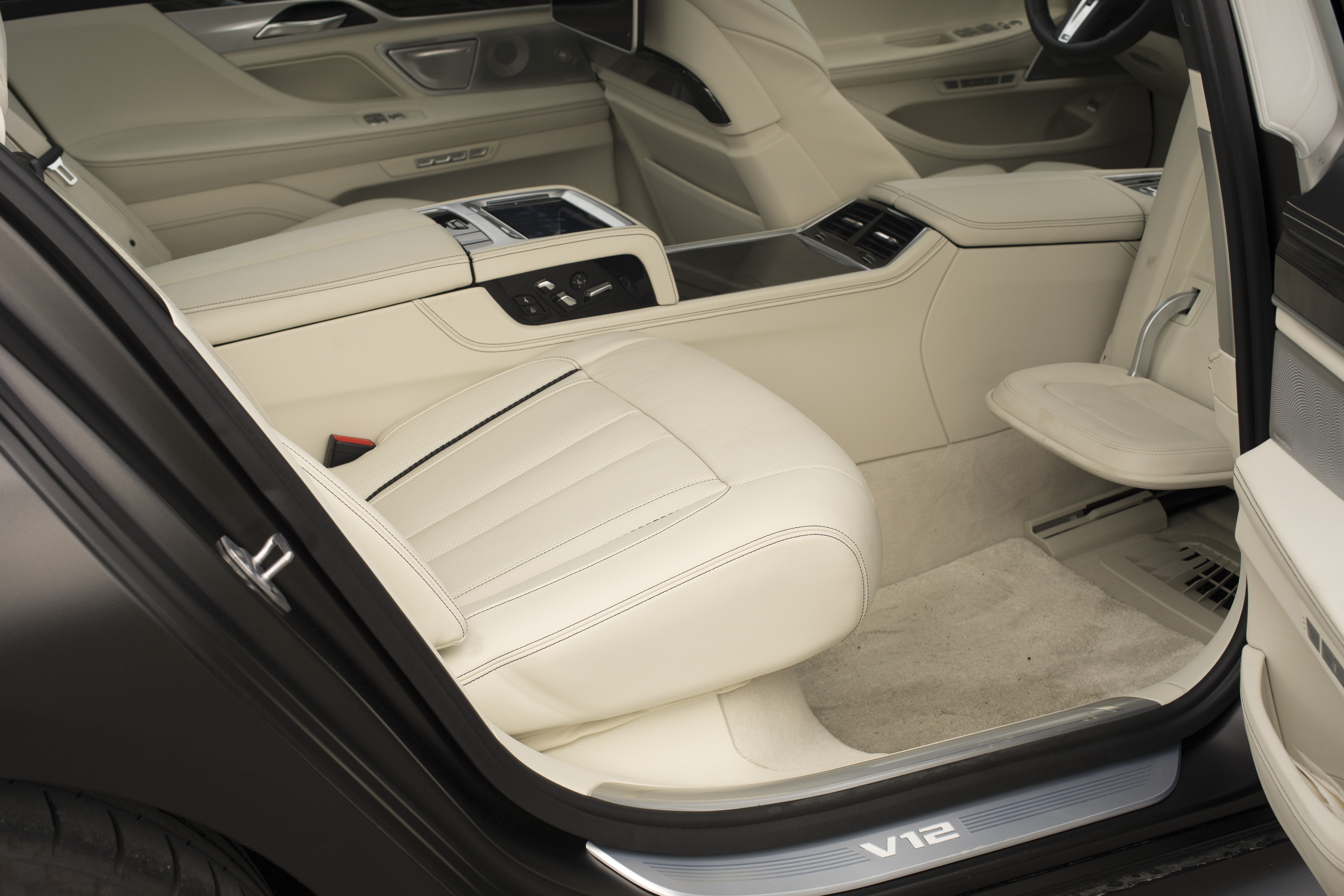 Of course a car like this has all of the latest driving aids and gadgetry like Active Cruise Control with stop and go that allows the car to drive itself in dense 401 traffic as I did. It is a bit unsettling at first, but the way the car slows down and speeds up in sync with traffic is brilliant. With steering assist the car will even follow the lines of road and steer for you. What’s left for the driver to do? Quite frankly—nothing. You end up feeling like a spectator and since the car is so coddling, it made me feel sleepy too. Not ideal behind the wheel.

I didn’t use these systems too much. They work well enough but, personally I don’t think I’m ready to relinquish control of driving just yet.

That would also defeat the purpose of the M760. This is the M performance version, not a true M car but one with M aspirations—so it should be driven. And like other M performance vehicles this car relishes a good flogging every once in a while.

If I were in the market for an M5, this M760 makes a very strong case for itself. While it might not be as hardcore or give you that ultimate lap time, most M5 drivers never track their cars anyways.

It also seems quite the bargain considering its as tested price of $183,000 is still about $100K south of the Ghost, which is in many ways the same car.

The Frozen Dark Brown on our tester coupled with the Cerium Grey trim, and the stunning 20” M light-alloy wheels pack a visual wallop that turns heads and distinguishes it from lesser 7’s.

In this realm of luxury automobiles presence is everything, and the M760Li has more of it than almost anything on road. And those V12 badges on the flanks might be showing off but when an engine is this epic, the world should know. 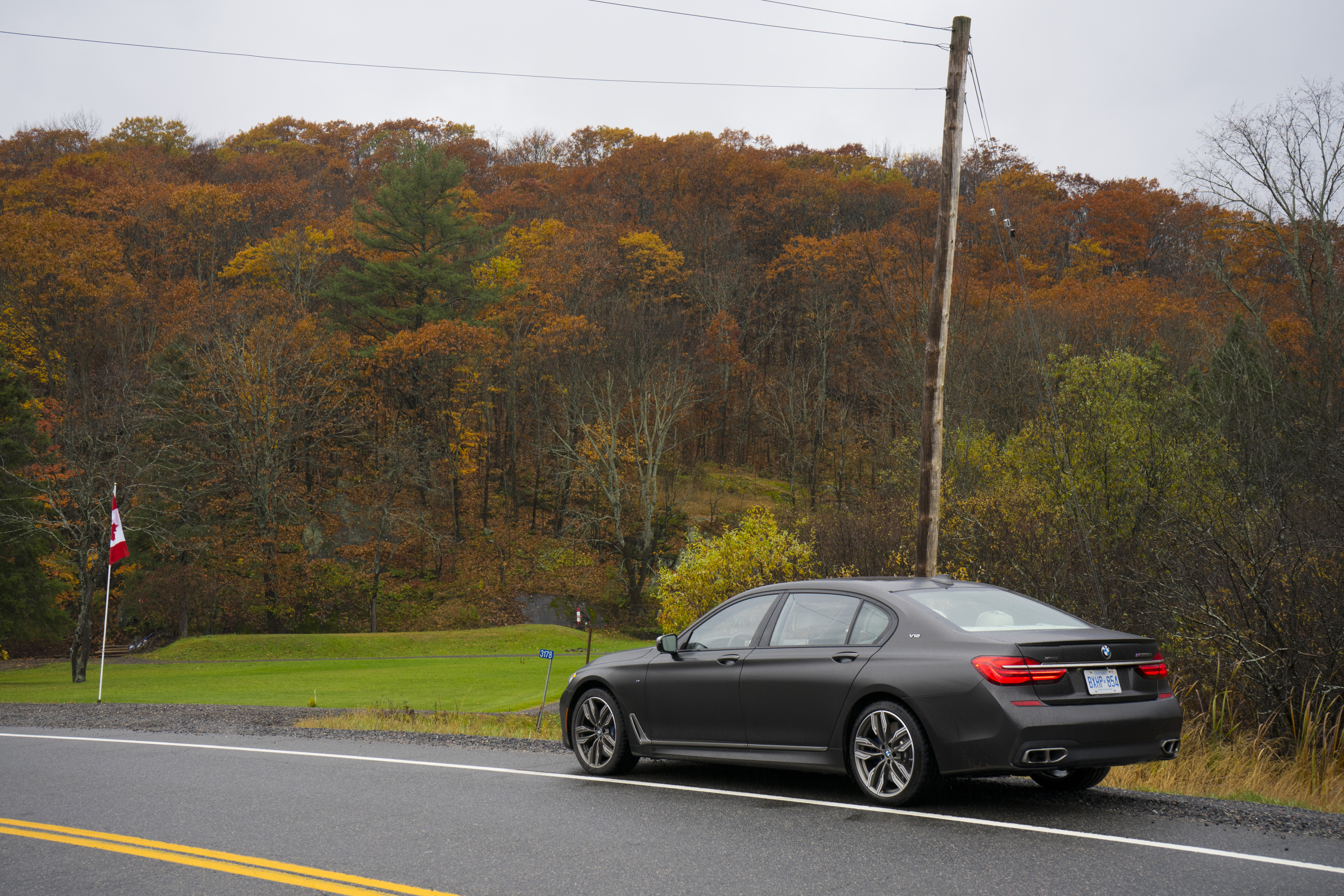 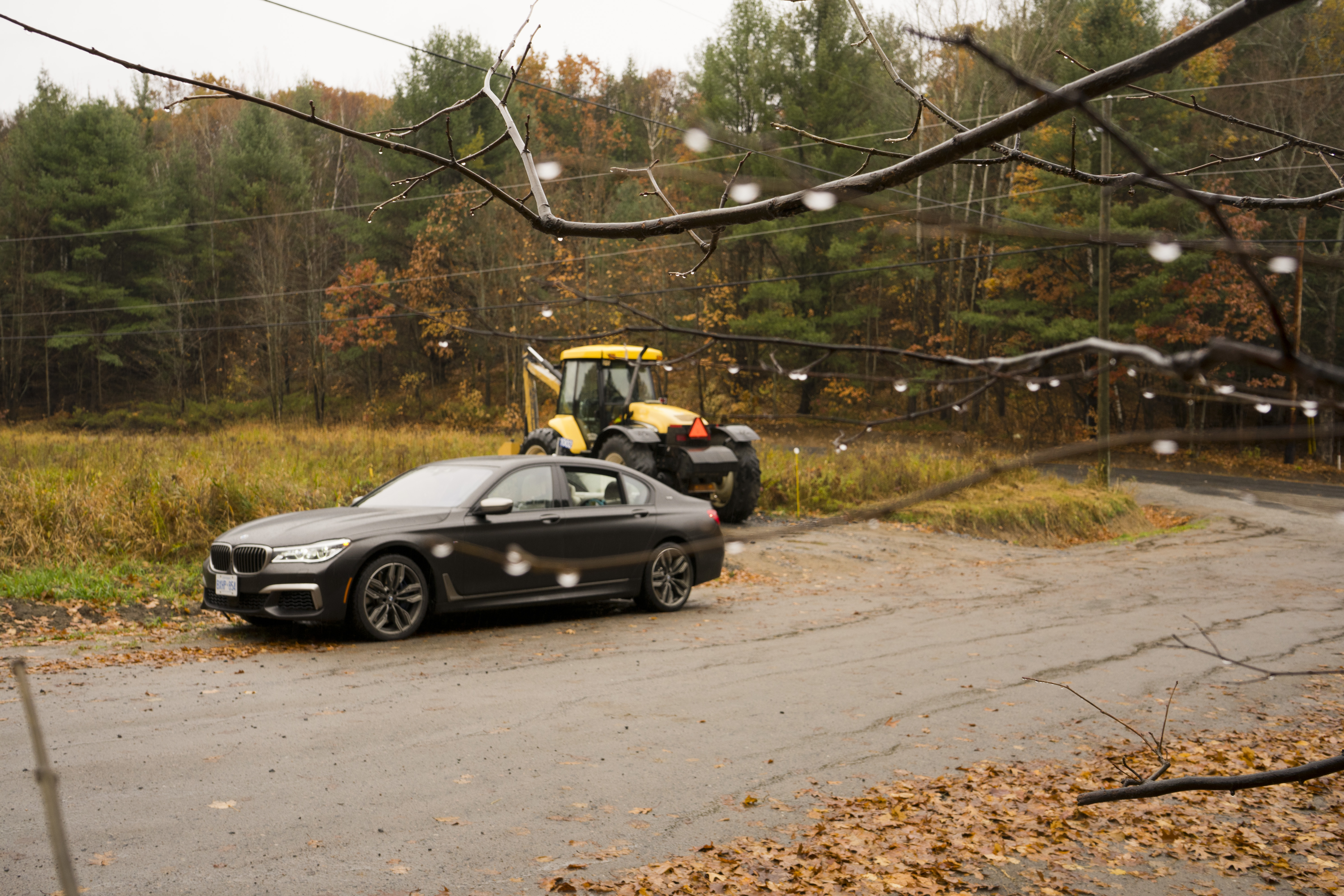 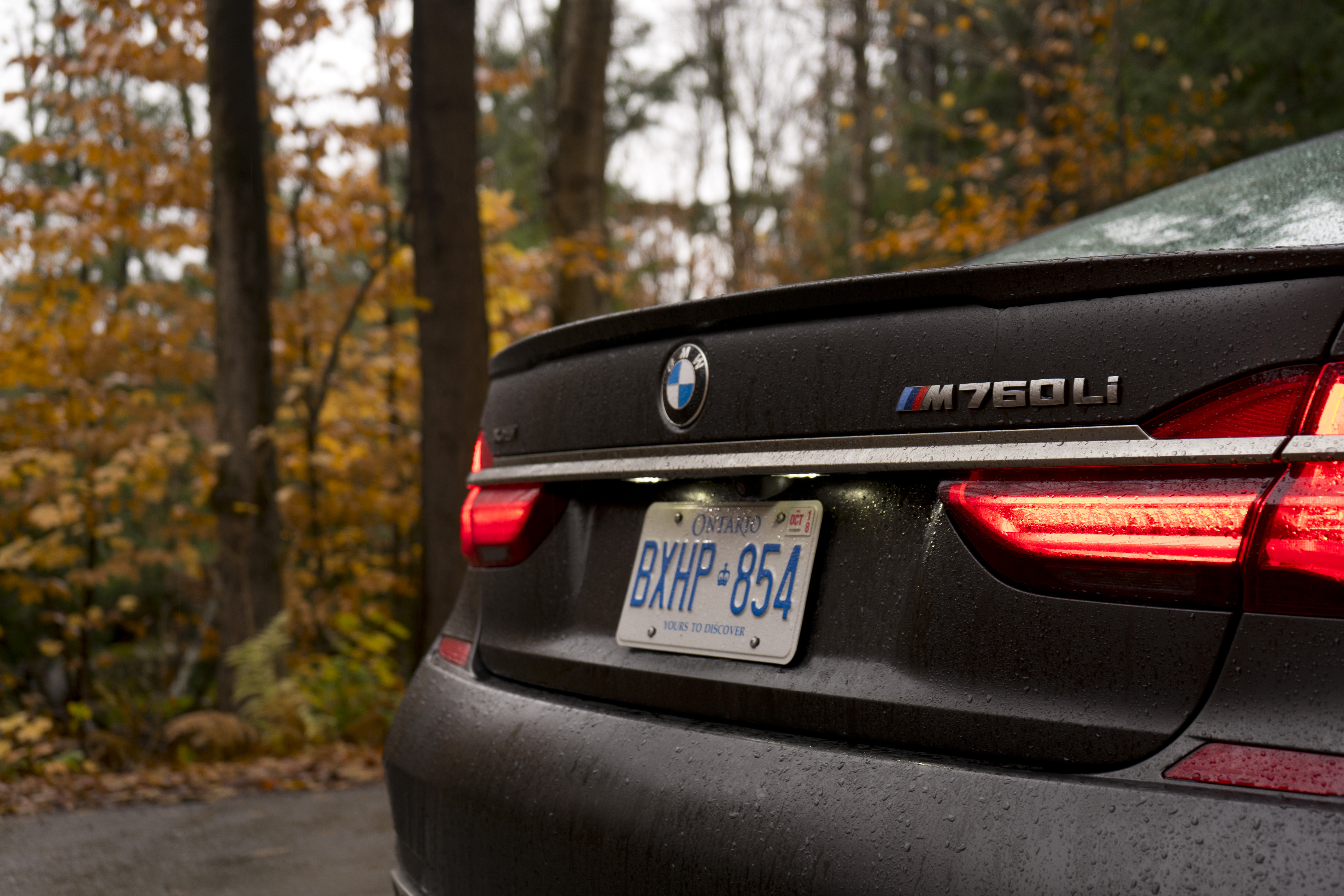 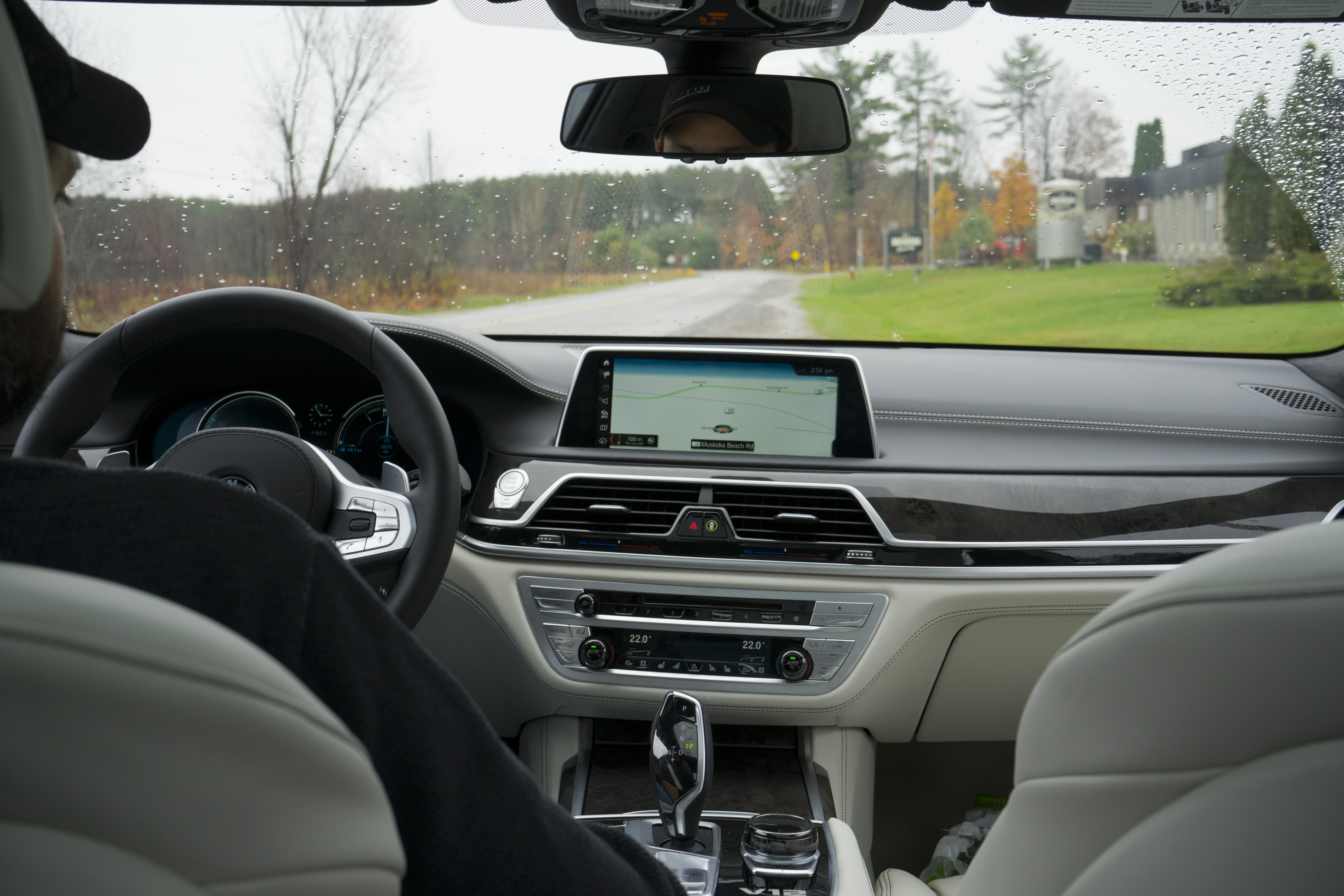 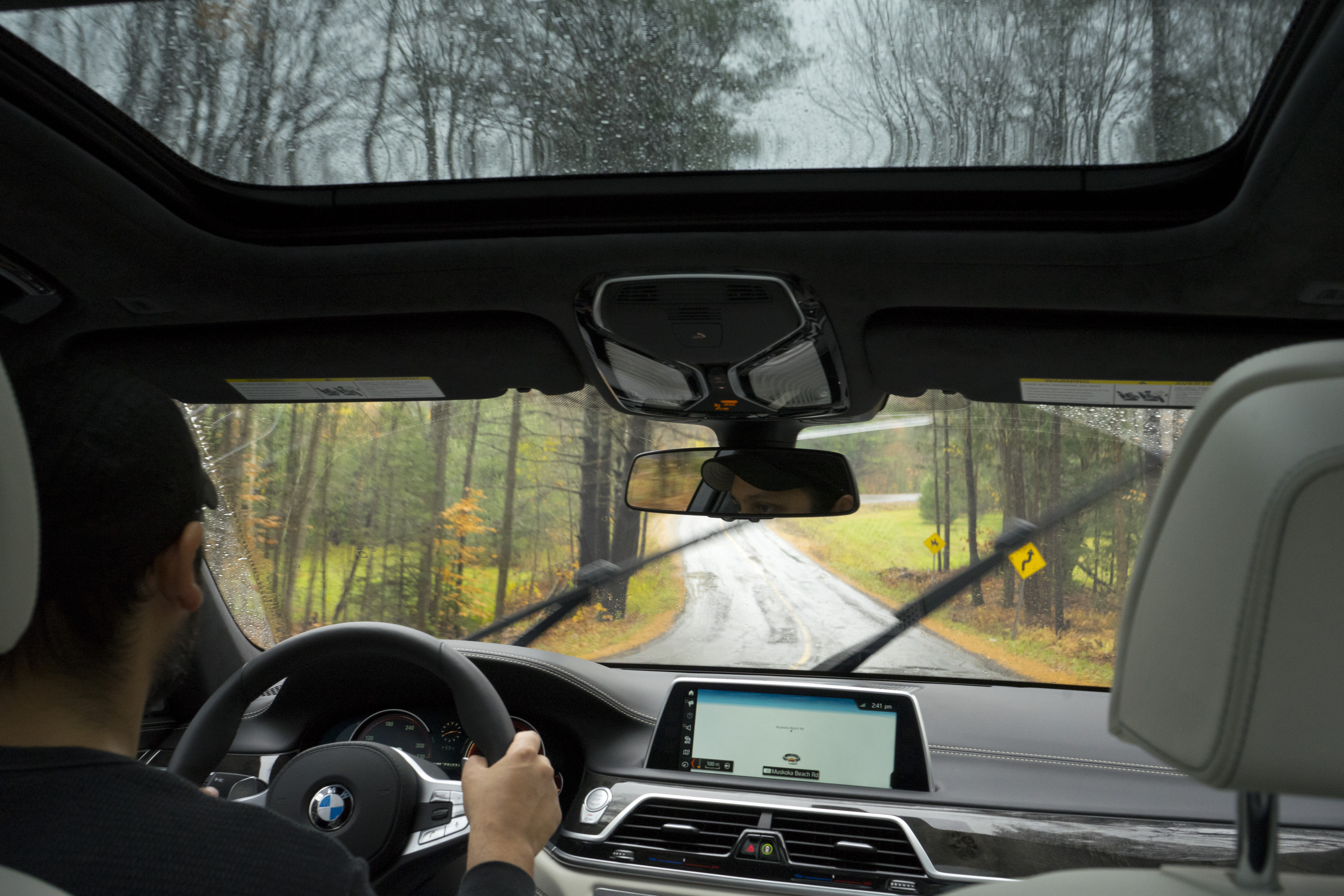 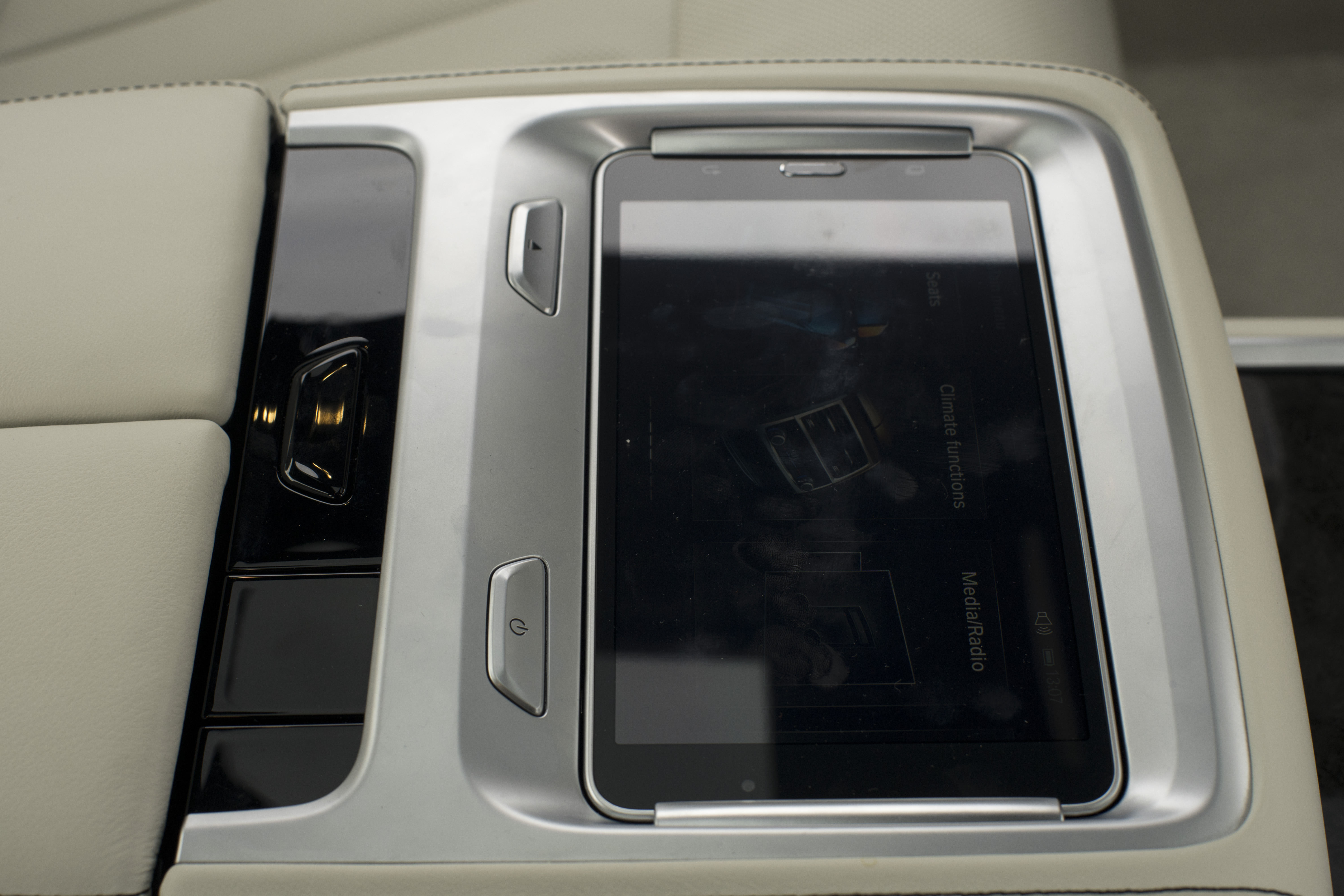 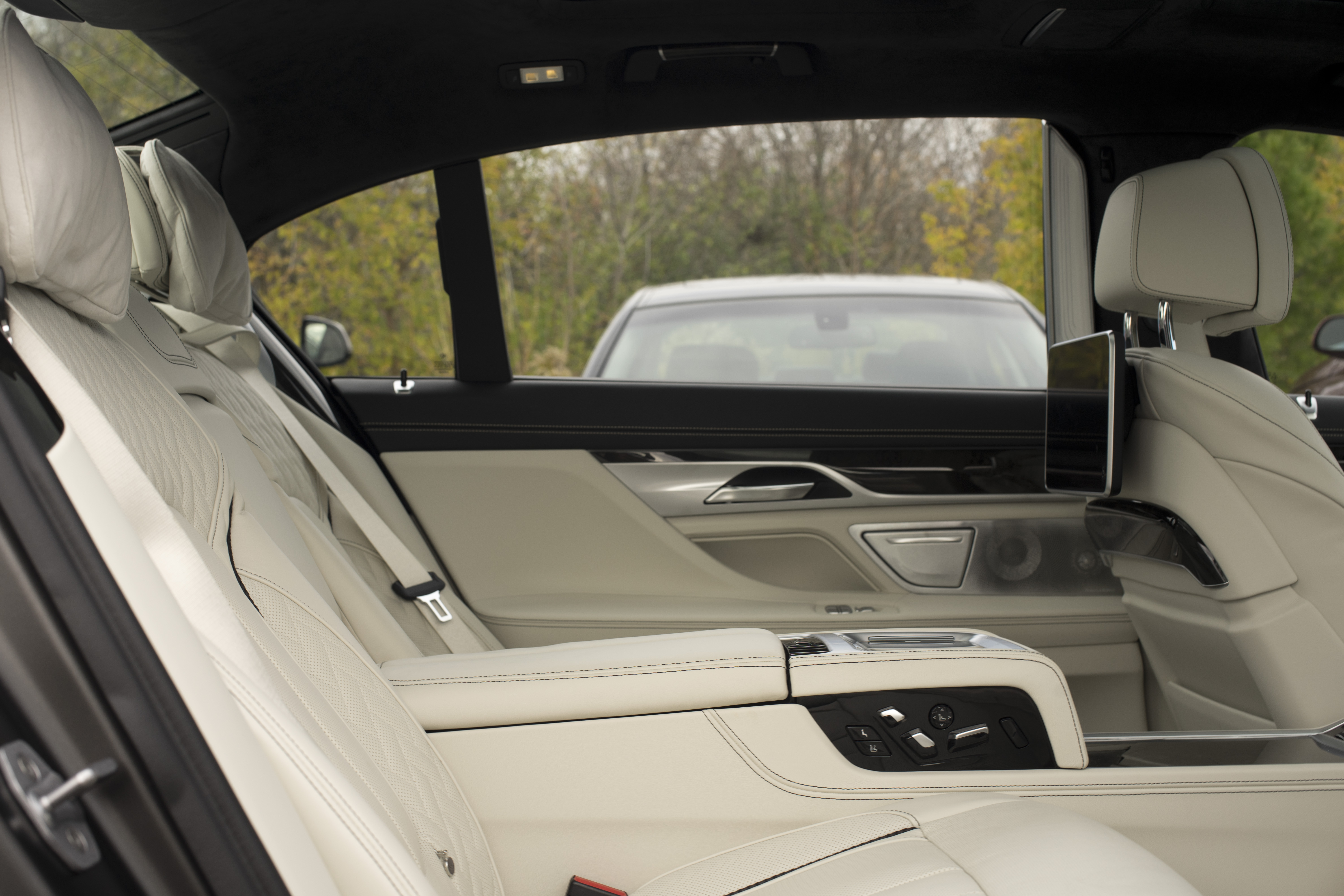 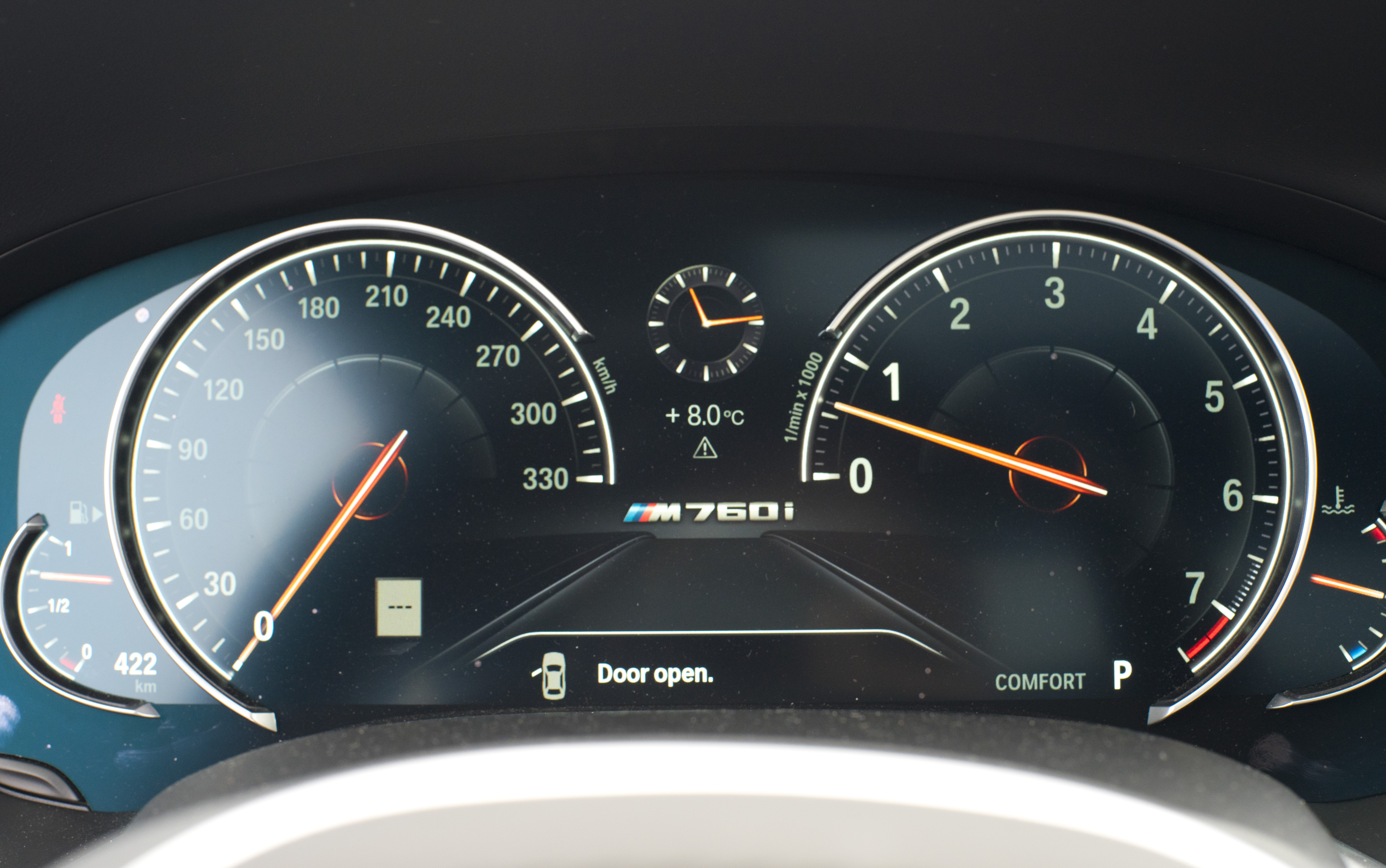 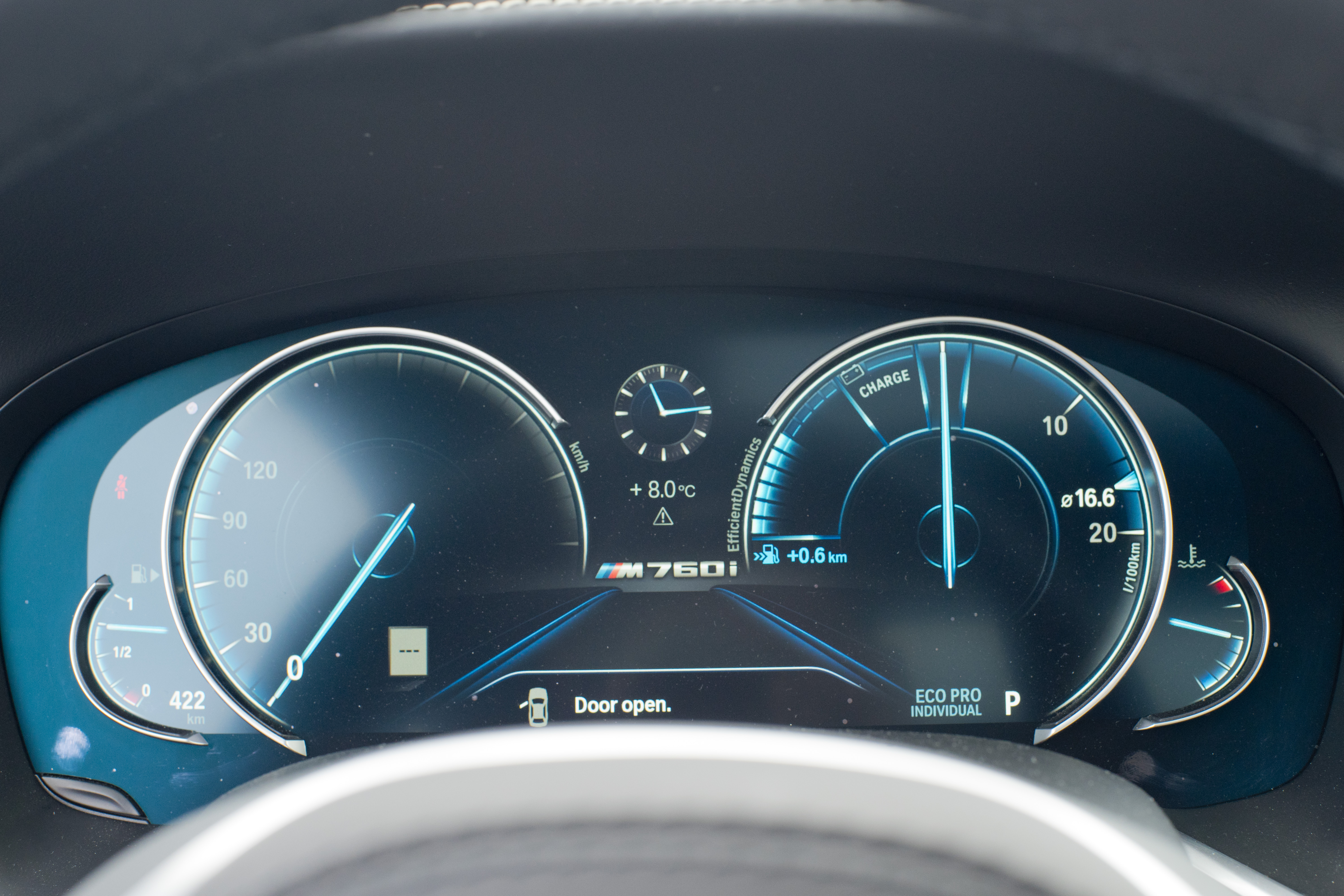 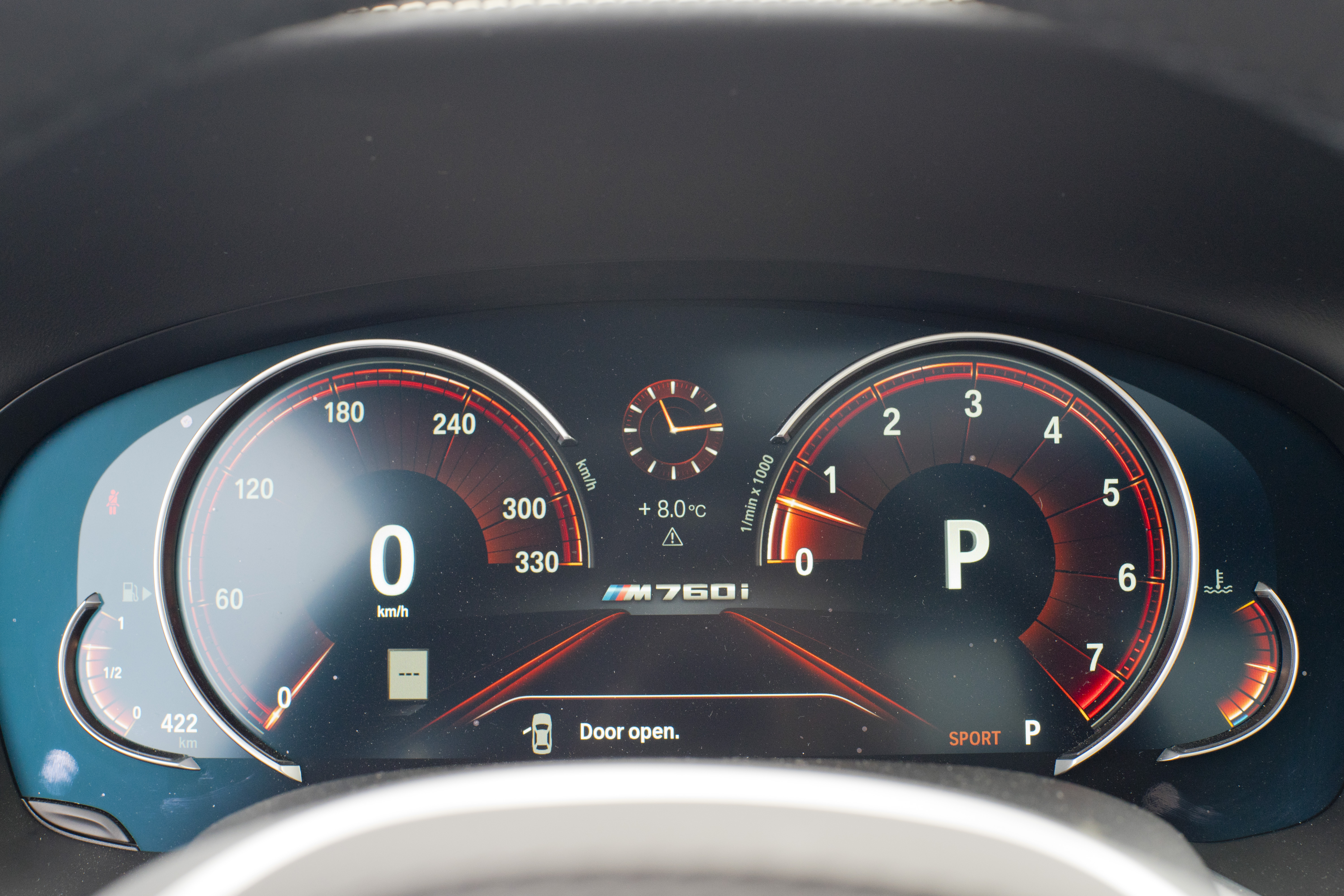 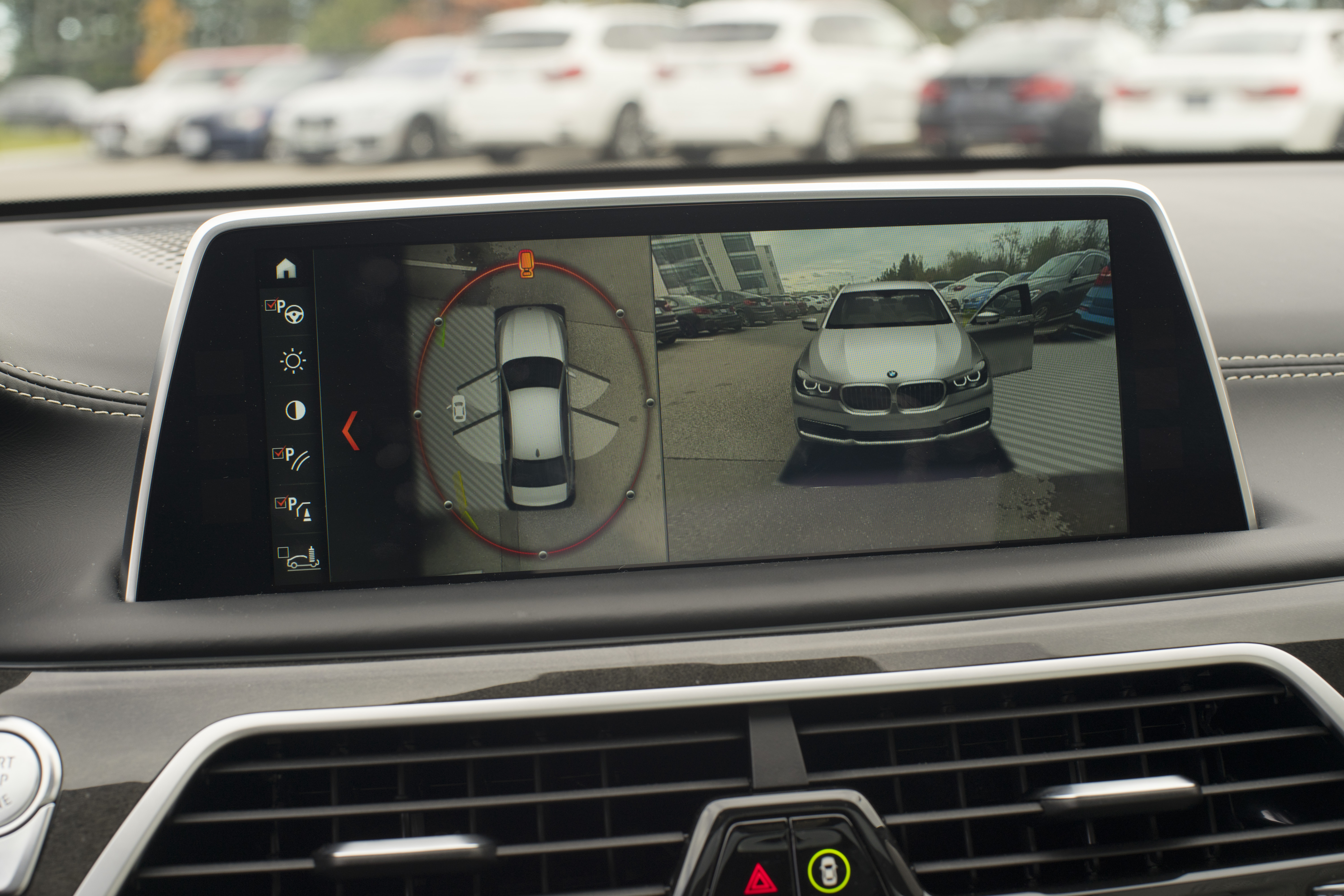 Click here to discover more on what the Muskoka region has to offer for year round travel.