I am struggling to find the words to begin this article, due to the fact my brain is still wrapping itself around having driven a $2.5 million Pagani Huayra 2hrs ago. Just writing those words scrambles my noodle. The best part was that I had no idea that I would be driving a Pagani. It was the most delightful of surprises.

So how did this come about? Well this story needs a bit of background. The weekend of September the 10th is the Luxury Supercar Weekend held at Van Dusen gardens here in Vancouver. I have been going to the show for the last few years, marveling at all the exotic machinery and exploring options on how to get behind the wheels of these rolling works of art.

I have worked for several years on building my supercar profile by testing cars and writing articles about my supercar adventures. This year I have driven a lot of Ferrari’s, the Ferrari FF, Ferrari F12, but most importantly I was given my first Ferrari manufacturer test drive down in LA with the new California T (Turbo) for 3 glorious days. I also squeezed in an Aventador roadster, and a McLaren 570S. 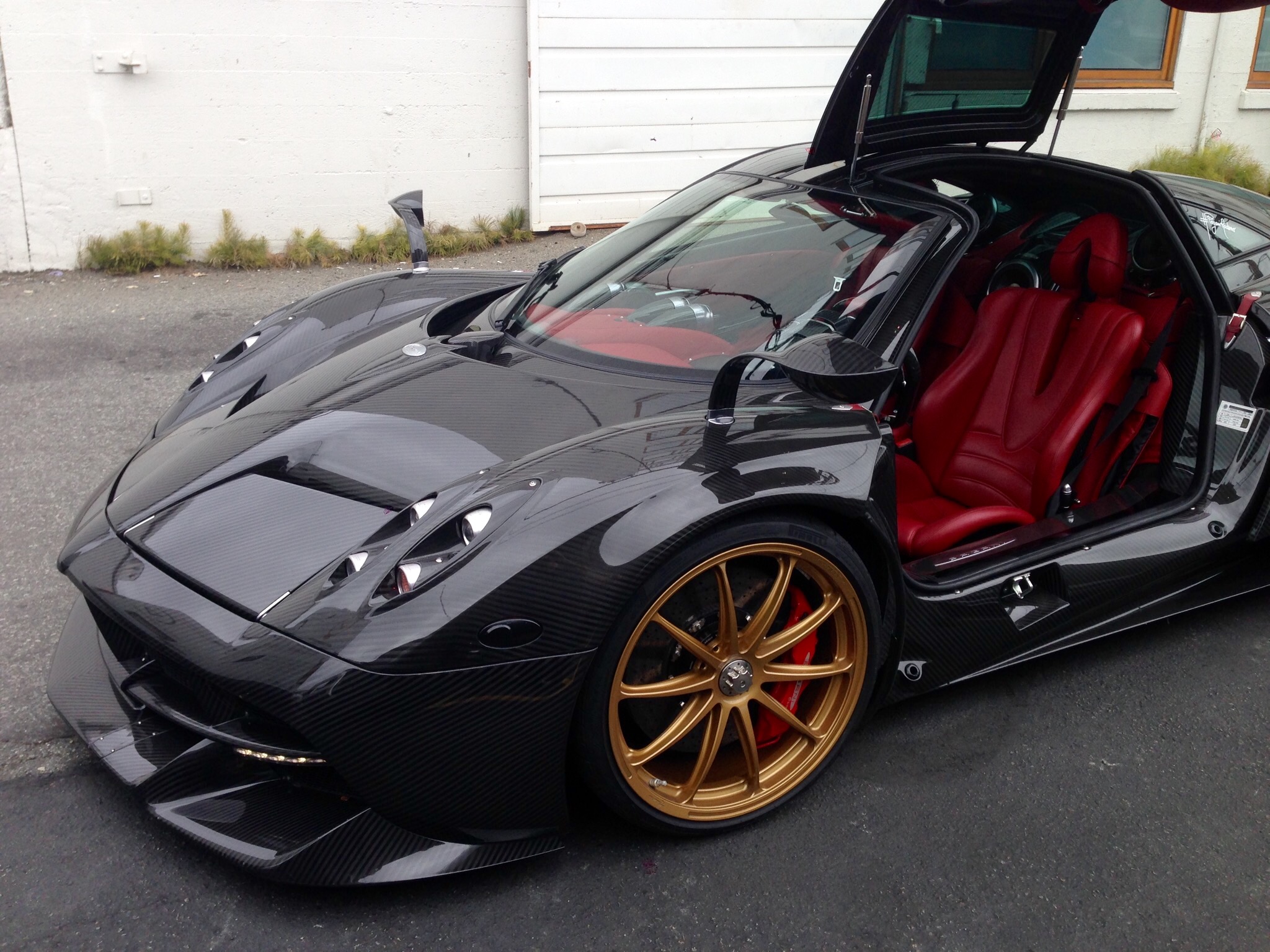 In conjunction with my driving adventures two important things happened. First, I have started to write for Wheels.ca, a prominent Canadian online automotive site. Second, I have been accepted as a Tribal Leader (of supercars) on Drive Tribe, the new social media site organized by the ex-Top Gear team of Jeremy Clarkson, Richard Hammond, James May and Executive Producer Andy Wilman. This will be launched in October alongside the launch of their new series “The Grand Tour”. I am so excited to be a part of this new endeavor and to share exciting new Supercar and Hypercar adventures.

With this in mind I approached the Pfaff McLaren dealership in Vancouver, who are also a licensed Pagani dealership to see what opportunities would be available.

My request was simply to accompany the Pagani Brand Ambassador Chris Green, in the Pagani Huayra to the Luxury Supercar Weekend show on Saturday. Wilson Ng is a Sales Executive and my contact at McLaren Vancouver arranged for me to come and meet Chris to discuss my request.

You May Like: The Ultimate Ferrari experience for the Ultimate Enthusiast

I arrived at McLaren where I met Chris who immediately took me over to the Huayra. It was almost a year to the date that I was this close to a Pagani Huayra when my wife and I attended an event held by Inform Design in Gastown, Vancouver. My wife and I both managed to have a seat in the car, but there was a horde of people milling about so it was delightful to have the Huayra all to myself. Chris and I chatted about the new Tempesta upgrade package for theHuayra, the new Huayra BC and the Huayra roadster. Chris had opened the rear clam shell so we could view the mighty AMG produced V12 engine.

So many details to drink in, like the sculpted rear suspension in gold anodized aluminum. My favorite piece is the titanium exhaust system that ends in the quad exhaust pipes exiting the rear. I may have begun to drool a little by the time I took a good look at the exquisite carbotanium weave that makes up the body of the car. In case you missed it, I was a very happy bunny chatting with Chris, and had not even had a chance to ask about my request.

Then out of the blue Chris says “Ok let me open the garage door then we can head out for a drive. I’ll drive it out for a few blocks then you can take over.” I was stunned. Did I just hear Chris say we were going to take a Pagani Huayra out for drive and that I was going to get the opportunity of a lifetime to drive it myself. There was no more time to dwell on the moment as the garage door began to open, so like an enthusiastic gazelle I bounded into the passenger seat. Reality was reasserting itself as I found myself sitting in the gloriously red passenger seat of the Pagani Huayra and pulling down the gull wing door. 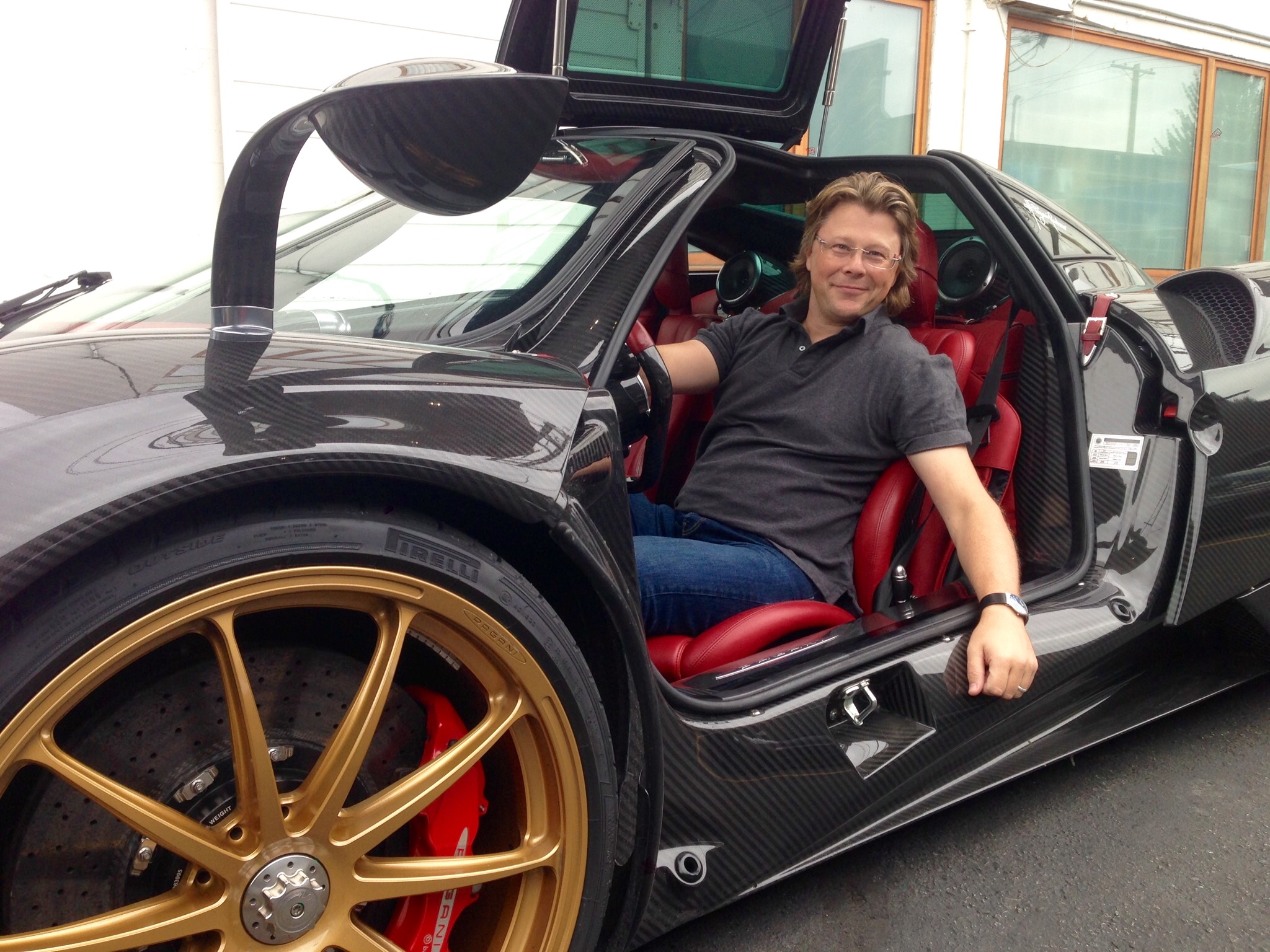 Chris Green is a professional racing driver. A fact I was profoundly grateful for when he unleashed seven hundred and thirty horsepower through the 6.0L twin turbo AMG V12 engine. I have driven numerous supercars so I have some idea what supercar performance is like, Hypercar performance takes it to another level entirely.

I was thrust back deeply and, very, very firmly into my seat. Pure undiluted power, it quite literally took my breath away. Chris repeated this maneuver several times, each was longer and yes I‘ll say it, more orgasmic, than the last. Accompanying this thrust is the hissing sound of the twin turbo’s waste gates opening and closing. So not your traditional V12 sound, rather another element of theatre that is the Pagani Huayra. Horacio Pagani’s instance on a single light weight clutch encompasses his determination for the driver to engage with the Huayra at all times. The Huayra leaves no doubt that you are driving a serious road-going machine.

All this excitement was from the passenger seat. Then it was my turn to drive the “wind god”. The glass panels in the gull wing doors provide light and help encourage an open feeling in the cockpit. Scarcely believing I was actually behind the wheel of a Pagani, I adjusted the eyelash mirrors which are works of art in their own right. The center mirror is so small it is essentially useless. Before I lost myself in the myriad of sculptured controls, I thumbed the right indicator on the steering wheel, and eased myself into traffic. The first 100 meters were pedestrian due to traffic, but then I got a break and unleashed several hundred horsepower which resulted in a shortness of breath combined with an electrifying feeling cascading down my body. 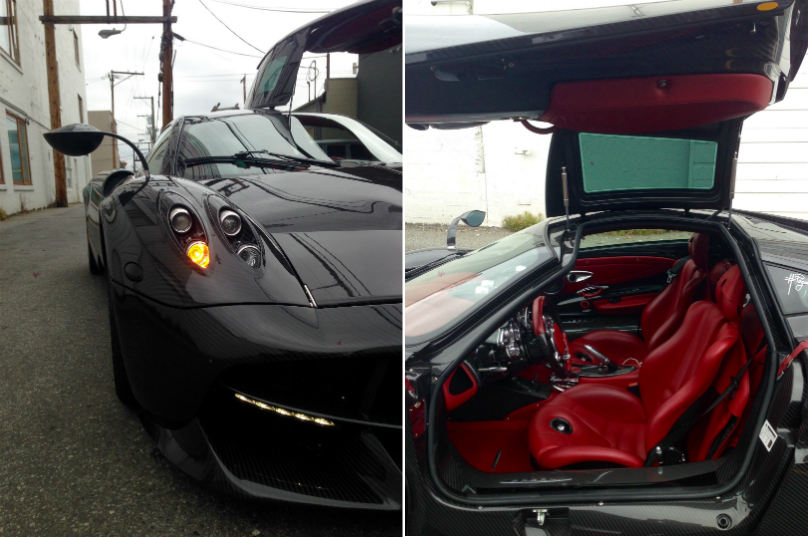 Chris encouraged me to drop down a few gears to feel the rear end kick loose and the surge of enormous torque. Sadly bridge traffic prevented me from replicating Chris’s earlier achievements. Frankly my senses were so overwhelmed it was hard to process the whole experience, paramount on my mind was not mangling 2.5 million dollars’ worth of exquisite carbon fiber.

Not wishing to take anything away from the power of the Huayra, but at moderate speed the car is easy to drive. The steering wheel is light, and the car goes where ever you direct it. As I found out on the bridge this calm hides a tremdous power that is waiting to be unleashed. I got to try another aspect of this Hypercar as we approached the McLaren Vancouver dealership. A large garbage truck blocked our passage so I was forced to reverse the Pagani Huayra. It was a breeze since the large eyelash mirrors provided excellent views that coupled with the rear view camera.

Five minutes later the truck had moved and I, rather cautiously parked the Huayra. My heart was still pounding in my chest, my senses on overload. I asked Chris for the obligatory pictures of me in the car and then we were done. I was, if only briefly a Pagani Huayra driver.

Unlike a great many supercars and hypercars this Huayra or Hanna as she is known has been driven over 30,000km, in all sorts of conditions which made her all the more attractive.

I must express my thanks to Wilson Ng and Chris Green of Pfaff McLaren for allowing me the honor and privilege of driving a Pagani Huayra. I can now quantify the term Hypercar. I loved that while I was driving the Huayra, Chris told me I was the most badass driver in Vancouver, haha awesome. This particular Huayra has the upgraded Tempesta package (at $160,000) which makes it even more exclusive. The Tempesta package can be added to any Huayra. It is distinguished by new wheels, and a new front splitter. The gorgeous suspension gets four way adjustable Ohlin shocks to cope with the increased downforce.

Unlike a great many supercars and hypercars this Huayra or Hanna as she is known has been driven over 30,000km, in all sorts of conditions which made her all the more attractive. These cars are meant to be driven on great roads amidst majestic scenery. I loved my drive, and I think I have fallen in love with Hanna (don’t tell my wife). If you will now excuse me I just need to be alone for a while as I process having driven a Pagani Huayra.