The Nissan Qashqai (pronounced cash kai) is already an incredibly successful nameplate in other areas of the globe.  To date, it has sold close to 3.5 million units!

Lacey Elliott: Getting to spend time in a brand new vehicle is always the best part of my job. It is even more exciting when you get to test drive it in an amazing city like Montreal.  This press trip is to drive a vehicle that is not really new, I would say ‘new-ish’? I say new-ish because the Nissan Qashqai (pronounced cash kai) is already an incredibly successful nameplate in other areas of the globe.  To date, it has sold close to 3.5 million units! So I think it is about time Canadians get to see what this vehicle is all about.

Nissan has sold over two-and-a-half million of these throughout Europe since 2007. I’ll save you the trouble: that’s about 250,000 sold per year. Better yet, Nissan reports that most of these are still on the road. It’s time for us Canadians to finally see what all the fuss is about. 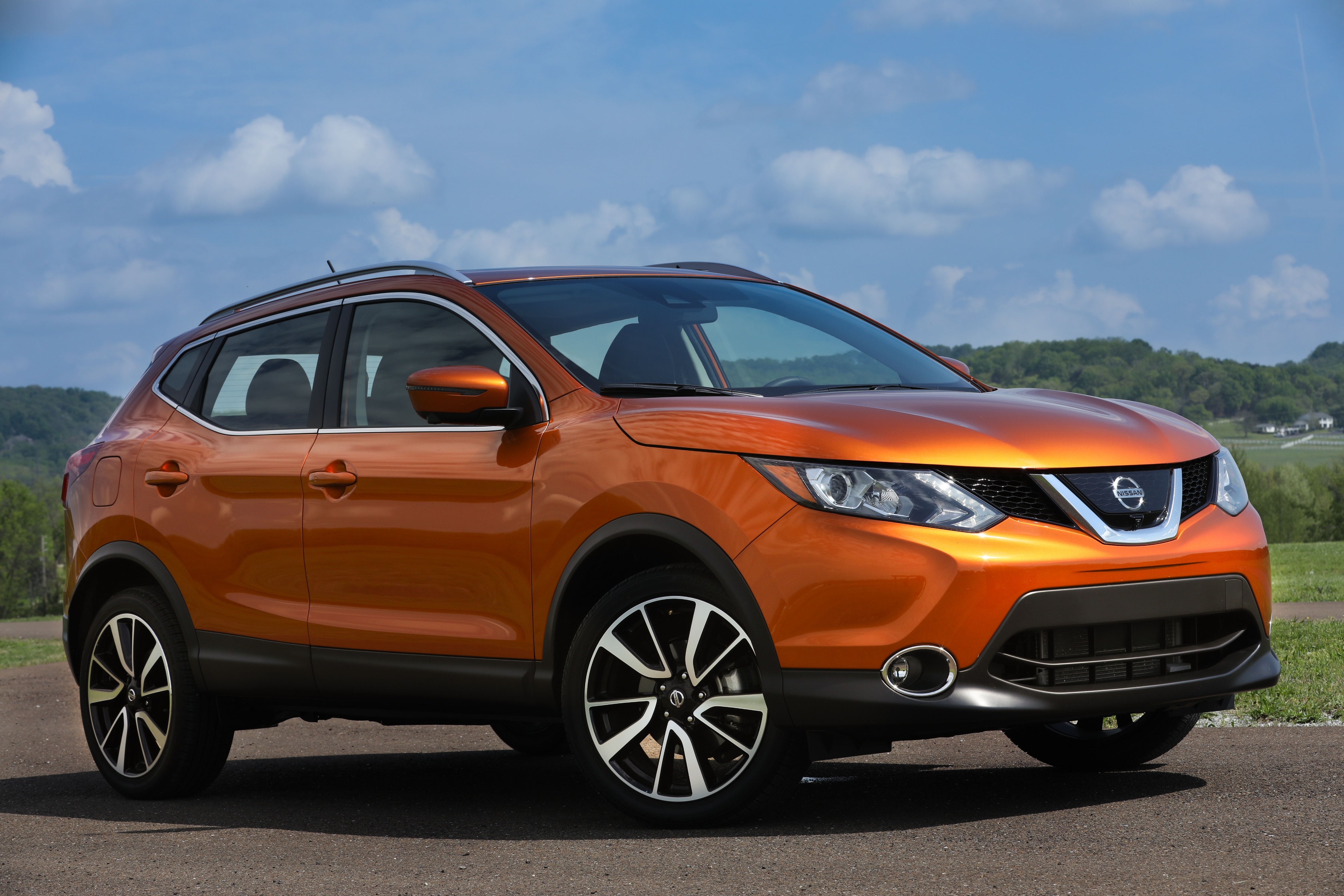 LE: The Qashqai shares the same platform as the incredibly popular Nissan Rogue but is smaller, shorter and lower to the ground. This little guy is coming to Canada at just the right time. In 2016 the compact SUV segment became the fastest growing segment in Canada.

The Qashqai is sportier than the Rogue. The body shape is super sleek with a lower profile and very strong presence. The front grille features Nissan’s signature LED daytime running lights. The back end has a sexy rear spoiler and boomerang shaped tail lights. At first glance, these two look very similar.  Park them nose to nose though, and you will easily spot the differences.

I like Nissan interiors. They still have simple buttons and knobs for most features and look clean and modern. There is shiny piano black finish and chrome accents scattered throughout the cabin.  Some places have a hard cheap feeling plastic, but with that being said, there is a leather wrapped steering wheel as a standard feature on the SV trim and higher trims. We have our hands on the wheel more than any other surface in the vehicle, so I am glad Nissan chose to put extra attention here.

I love the colors that are available: Nitro Lime, Cassiar Blue, Monarch Orange and Palatial Ruby as well as shades of white to black. Artistic, right brained women will love all the creative choices.

DH: Of courses, we must not forget that the Rogue also exists, and if the Qashqai sells like gangbusters over there, the Rogue continues to kick butt and take names over here. Nissan has to be careful, then, to ensure that folks can see a tangible difference between the two beyond the fact the Qashqai’s rear overhang is a lot shorter than that of the Rogue. Up until very recently it would have been even tougher for the Qashqai, as Nissan also had the Juke, whose out-there styling is pretty much its calling card. I say “up until recently”, though, because Nissan has now officially killed the Juke so the Qashqai is ostensibly the way to go for the younger buyer that wants a Nissan.

The best way to sway said younger buyer, it seems, is to fry their retinas with bright colours. OK, that may be a little extreme but for the first time in what seems like forever, a crossover’s offered colour swatch actually has more proper colours than it does variations of grey, black and silver. Lacey mentioned the colours so I won’t bore you by repeating those. I will say, however, I love the choices we do get, from their hues right down to their nomenclature. And I’m not even an artistic right brained woman!

Also Read: A crossover for all seasons 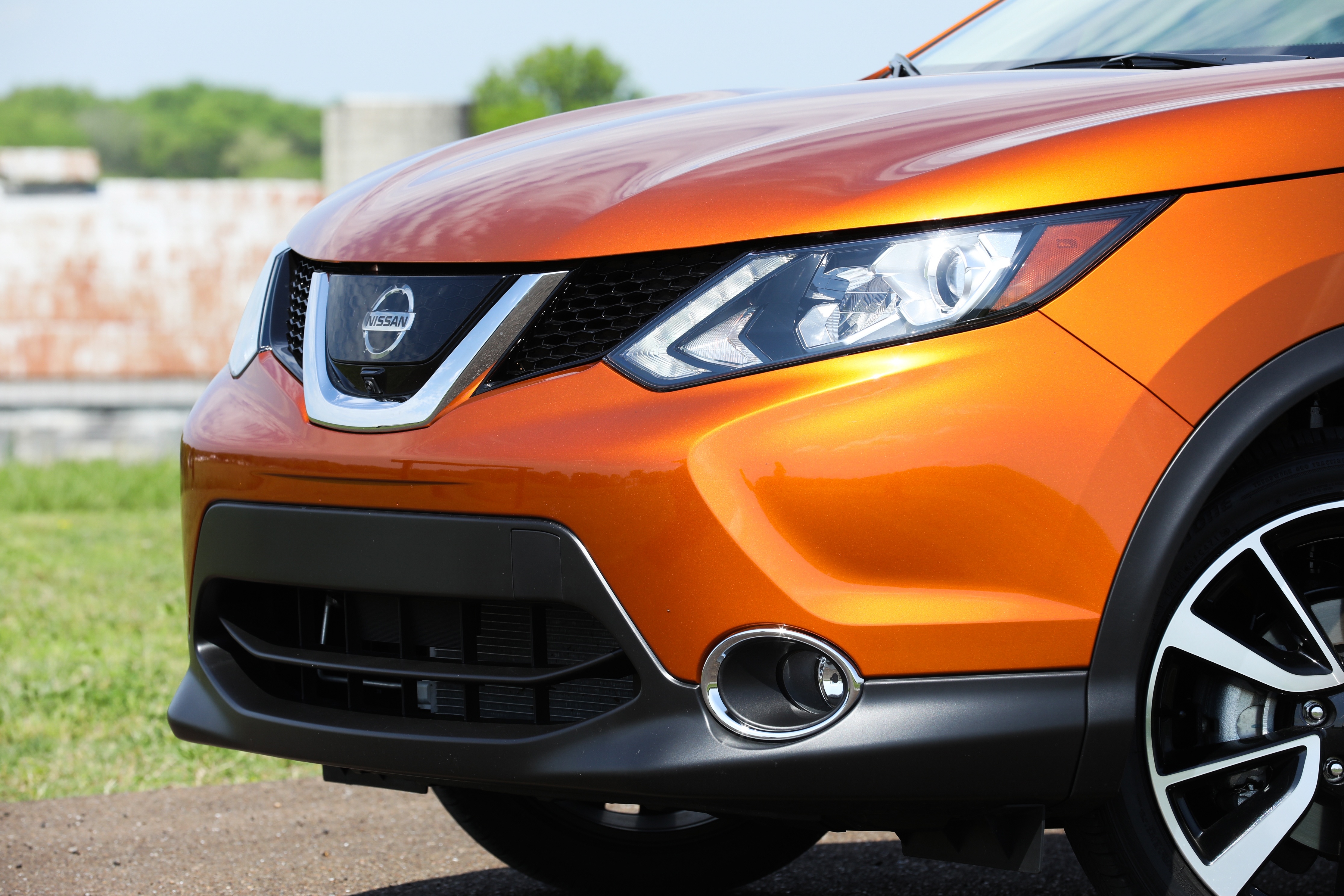 LE: Nissan is targeting customers who are looking for a cross between an urban commuter and an SUV.   They hope that people looking to buy a Mazda3 sport, VW golf, Honda HR-V, or Mazda CX-3 would consider this small Qashqai instead.

Montreal is a busy city with narrow roads, lots of traffic and bumpy cobblestone streets. The perfect arena to put this city SUV to the test.

It’s powered by a 2.0L DOHC 16-valve 4 cylinder and puts out 141hp.  Only in Canada do we get a choice of a 6-speed manual or, like the rest of the world, the Xtronic transmission with sport mode shifter.  Unfortunately, I was not able try the manual so I am curious to hear what Dan thinks. I have no complaints about the CVT. Nissan has always done a good job with its execution.

The compact size and short wheel base make this an ideal city car. Match it to electric power assisted steering that is light and responsive and you get a nimble feeling vehicle that loves moving around on busy city streets. Independent rear suspension helps deliver agile handling and solid cornering.

I don’t know who else in Canada has streets like these? So if the suspension is smooth and quiet on these cobblestones, it will be no match for any other Canadian roads.

After maneuvering out of the downtown core, we headed for lunch. Even on the highway the Qashqai held its own. Just zippy enough to pass when needed and surprisingly quiet even at higher speeds.  Nissan has made sure that buyers will be comfortable both in and out of the city.

A high seating position for the driver allows for great outward visibility. The seats, both front and back are comfortable. Leg room is a bit tight in the back but will be fine if needed in a pinch for out of town guests.

This little SUV is really the perfect size for Nissan’s target customer. A single or couple with a city lifestyle looking for something that is both compact and versatile. It is small yet has a lot of useful cargo space in the back. The second row splits 60/40 and the seats fold flat. You can also get the available Divide -N-Hide Cargo system that creates a very functional space.

DH: My favorite part? The fact that Nissan has actually tuned the Qashqai to handle more athletically than the Rogue. The spring rates and shocks have been modified, making for reduced body roll and dive under braking. It’s actually the more agile feeling of the two.

More than just adding a layer of immersion to the drive experience, adding a little pointy-ness to the handling actually means it’s easier to navigate the situations in which the Qashqai’s supposed to excel, that is to say the urban jungle. The short overhangs make it just that much easier to thread through tight spots, while the high seating position – a little too high for me, but I digress – allows you to better see what’s going on around you.

I have to apologize, though. I’m not going to be able to answer Lacey’s question about the manual because I haven’t had the chance to experience it either. I drove the Xtronic CVT as well, and as someone who looks for an involving drive above all I don’t love CVTs as a rule, Nissan’s offering is not a bad compromise. I’m a bit miffed that there’s no paddle shift option, but they’ve programmed in virtual shift points to make it feel like you’re driving something with a little more “oomph”. Plus it makes for smoother progress when cruising, which is nice.

It’s good that the transmission allows for that, because as you’ll see from Lacey’s numbers, there isn’t a huge amount of power on offer. That 141 hp figure equals that of the Honda HR-V and is down a little on the Mazda CX-3, both vehicles that are a little smaller than the Qashqai but will surely be cross-shopped with it. I’ve sampled all three vehicles and those two do feel a little quicker than does the Qashqai. It’s not significant, but it’s there. Doesn’t take away from the Qashqai’s ride and handling, though, which will surely be a big attraction for many buyers. 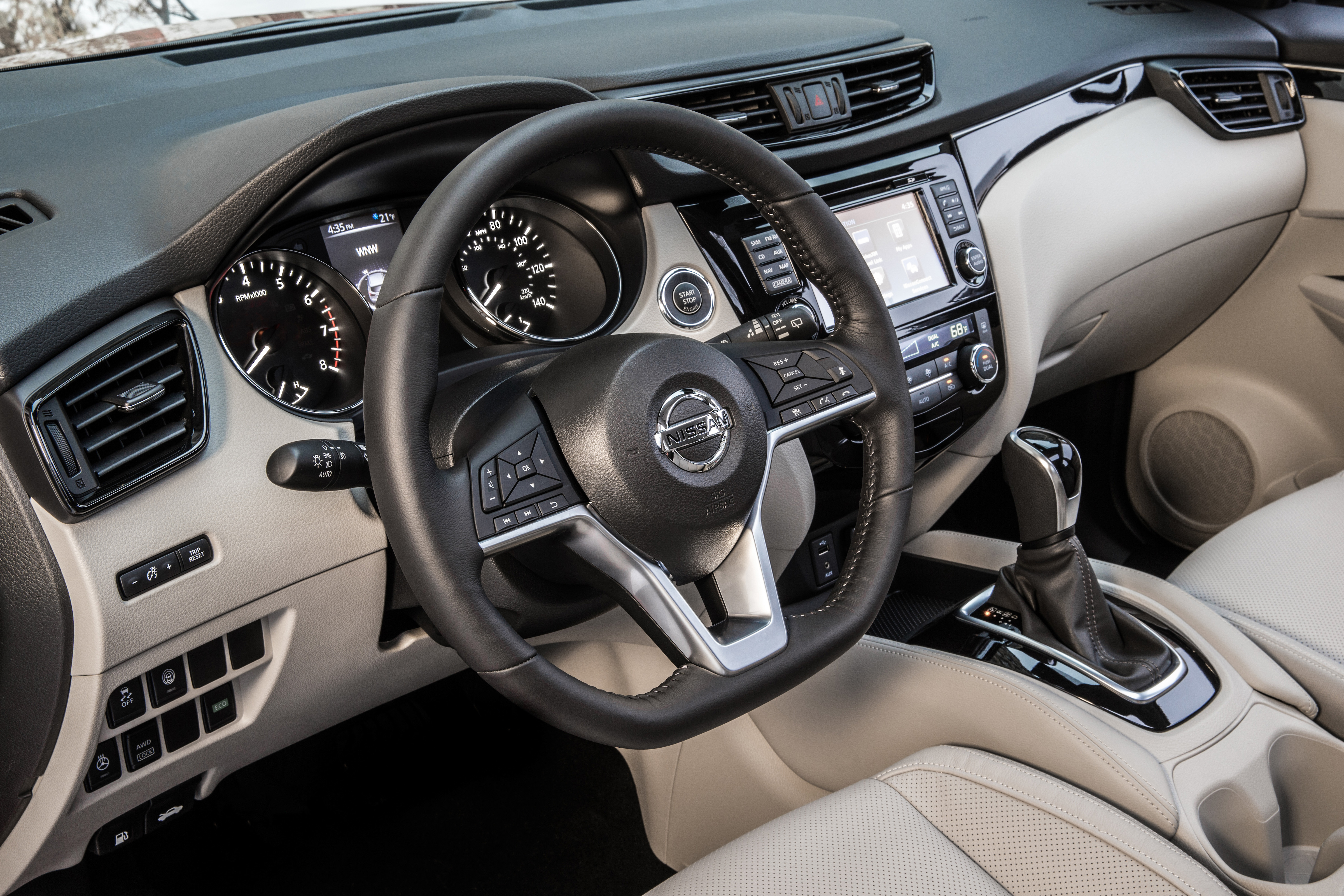 Qashqai offers a long list of advanced Nissan Intelligent Safety Shield technologies that are not available on some of the competition.  Items such as blind spot warning, lane departure warning, rear cross traffic alert and intelligent lane intervention, just to name a few.

DH: Oh, that Around View Monitor. Other manufacturers have since come out with a version of this, but Nissan’s was one of the first and even for a smaller vehicle like this, it’s a great feature to have. The top-down and front/back views are great, but I’m a big fan of the over-the-wheel view that will surely save you many a dinged rim when parking.

LE: The Qashqai starts at $20,000 for the FWD manual and close to $25,000 for the well-equipped SV trim.  Add in the available Canadian only features, and I am confident that Canadians are going to fall in love with the Qashqai just like the rest of the world.

DH: That starting price is the real eye-opener for me. Nissan made big news when their Micra subcompact managed to undercut Mitsubishi’s Mirage as the lowest-priced new car, and it seems like Nissan’s trying to kind of do a “Micra of Crossovers” thing with the Qashqai. Those smaller competitive vehicles I mentioned? They all start at more than the Qashqai, and that should be a big draw for anybody. Now, with the demise of the Juke, I’ll expect they’ll be selling plenty of these.

Except for one thing.

If I were the Qashqai, it wouldn’t be the external competition I’d be worried about, but the internal competition from the larger Rogue, which starts at just around 5 grand more than the Qashqai. The Rogue has a very dedicated customer base that just seems to be growing, so it will be interesting to see how the Qashqai can eat into those sales. 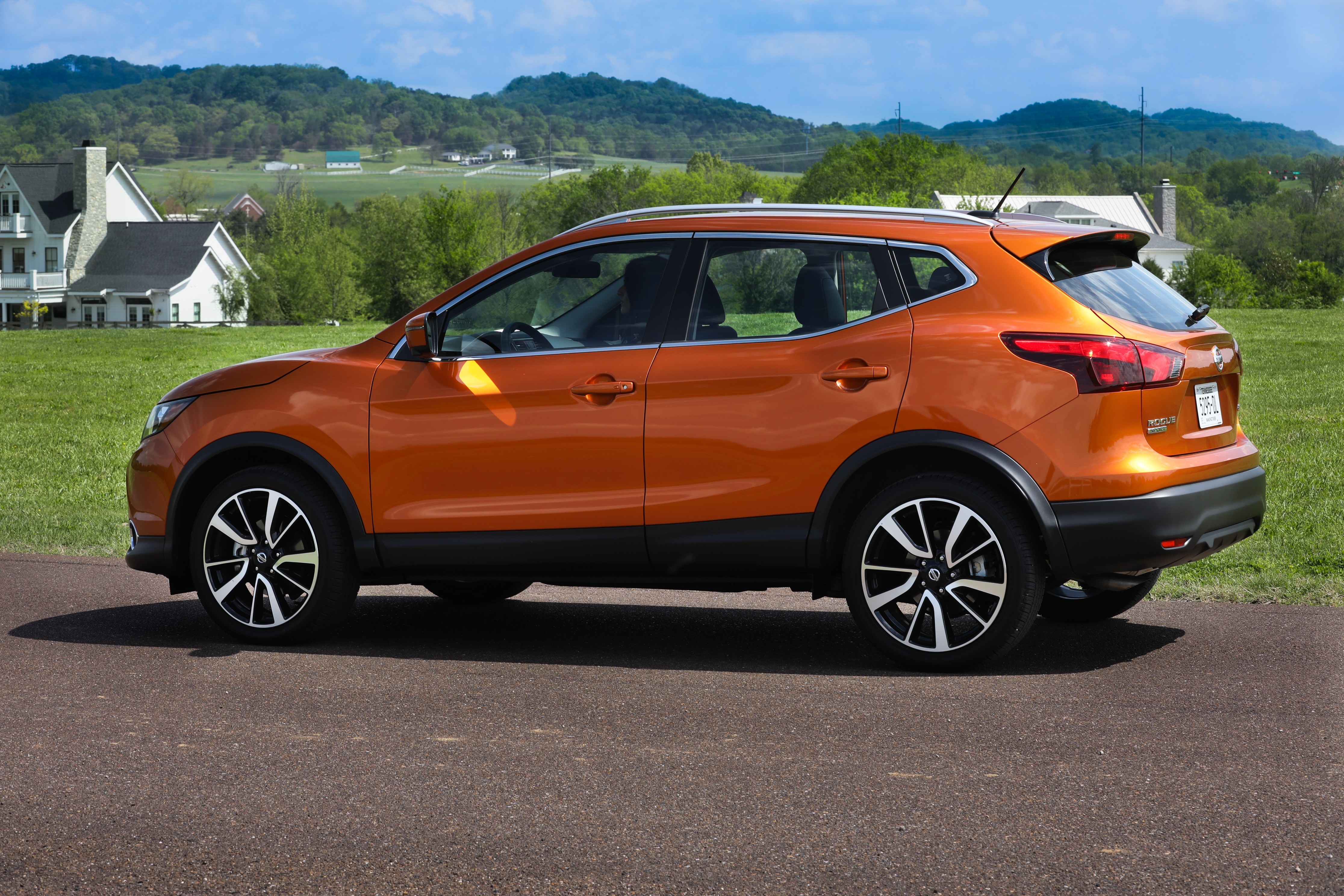