For 2017, Toyota’s thrown all that out the window, choosing to style the Corolla with, well, actual style. The front end is decidedly aggressive, with angry vertical slashes for its LED running lights which bookend a gaping trapezoidal maw filled with black mesh.

I’ll freely submit that there are many things in this world which are wildly popular but I do not understand. Kale chips, for example. PewDiePie on YouTube. Episodes of The Bachelorette. I don’t begrudge any of these their success—well, ok, maybe The Bachelorette gets on my nerves—and in fact I applaud their ability to triumphantly tap into some part of the public’s consciousness. I do, however, remain mystified.

For years, I was also mystified by the Toyota Corolla. Despite its stodgy image and somnambulant styling, the thing sold like hotcakes. Last year alone, they shifted 45,626 copies in Canada. That’s 125 Corollas sold every day, around the clock. By comparison, the popular Mazda 3 was a sales disaster; they only sold 75 a day.

Last year’s model made an effort to look more adventurous, with its pointy headlights and frowny-face lower grille. Problem was, it largely ended up looking like your math teacher who suddenly decided to wear UnderArmour hoodies and don his ball cap backwards. The effort was made but there was the ever-present whiff of Ben-Gay.

For 2017, Toyota’s thrown all that out the window, choosing to style the Corolla with, well, actual style. The front end is decidedly aggressive, with angry vertical slashes for its LED running lights which bookend a gaping trapezoidal maw filled with black mesh. The nose pinches down to an oversized Toyota logo, and a pseudo-spoiler juts out from its chin. This time, your math teacher didn’t stop with new hoodies and a ball cap; he went and got three new tribal tats and a nose ring. 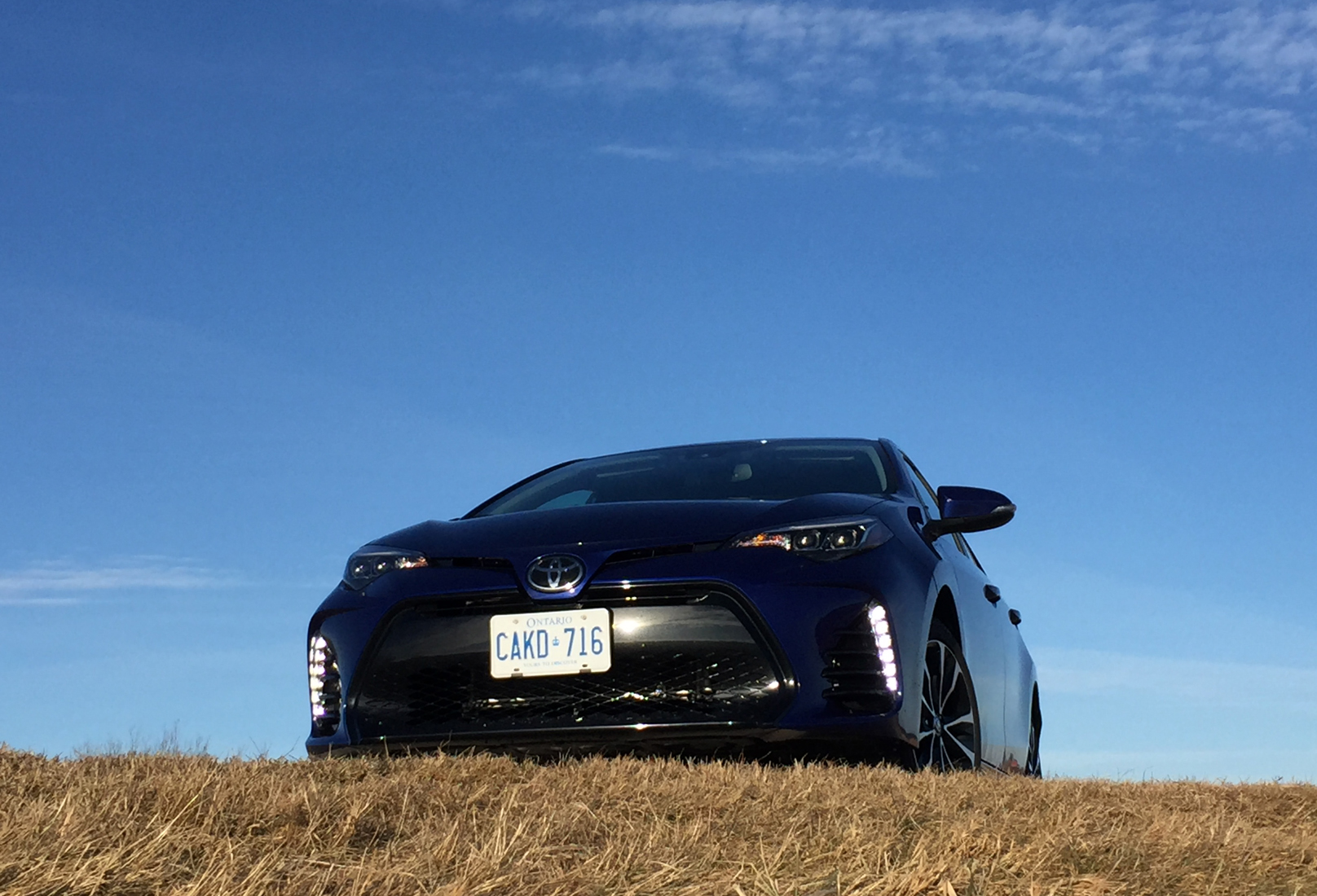 Behind the bold new face is a 1.8-litre inline-four cylinder engine, making 132 horsepower. That doesn’t sound like a lot, but the Ontario-built Corolla weights less than 2900lbs, so acceleration is merely uninspiring rather than glacier-like. Our test vehicle was fitted with a continuously variable transmission which places the tachometer firmly in the power band and keeps it there during passing manoeuvers. Shod with 17” Bridgestone Blizzak winter tires, the Corolla handled predictably but won’t be mistaken for a canyon corner carver anytime soon.

Very few shoppers buy a Corolla for its sporting intentions, however, and it is in the passenger cabin where the compact Toyota earns its keep. This thing feels huge inside, defying the logic of my measuring tape which told me that this car is but a pencil’s-width over fifteen feet long. There was plenty of leg- and headroom in the driver’s seat for this 6’6” author, a shocking discovery as my knees are perpetually bruised from the dashboards of some poorly designed crossovers. Abundant storage space abounded in the centre console and cavernous glovebox. A deep bin fore of the shifter accommodates an iPhone 6+ without difficulty. Charging points abound. 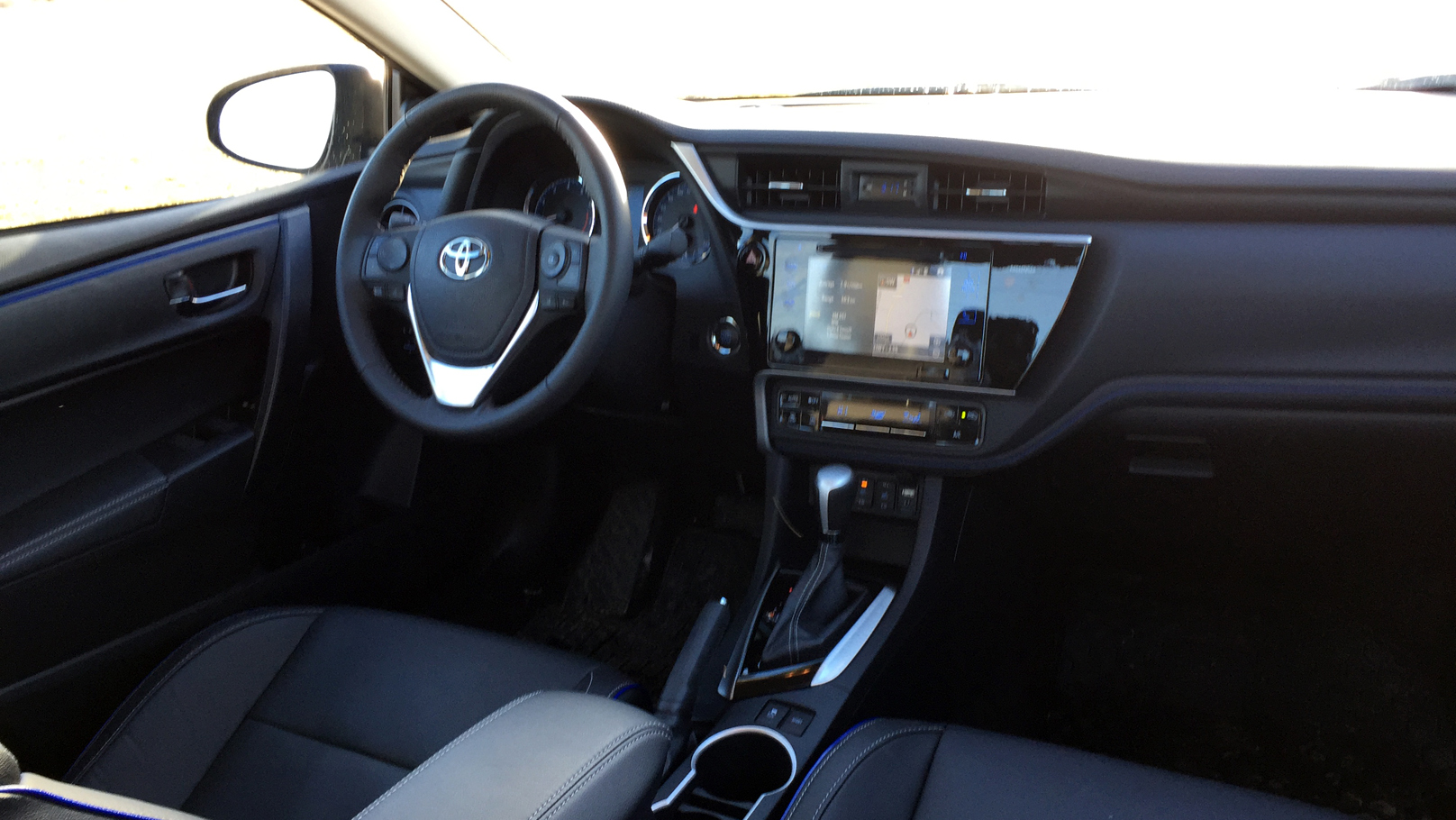 The back seat was equally welcoming, featuring plenty of space for elementary-aged kiddos plus a flip-down armrest with integrated cupholders. Blue piping on the seats contrasted nicely with the black leather seating surfaces and matched the striking Blue Crush Metallic paint. The rear seatback can be folded down to expand the 13 cu.ft trunk, a space which is large and well-shaped. The Corolla does employ large swing arms for its trunk lid, rather than hydraulic struts which do not intrude on trunk space, so take care not to load the trunk to capacity and accidentally crush your belongings when closing the lid.

Drivers of the Corolla are presented with a clear set of dashboard gauges, with a reconfigurable 4.2” digital screen designed to display trip or audio information residing between the large and easy-to-read tachometer and speedometer. The blue illumination is soft and pleasant, avoiding the glare created by vehicles which choose to display information in harsh red or orange. 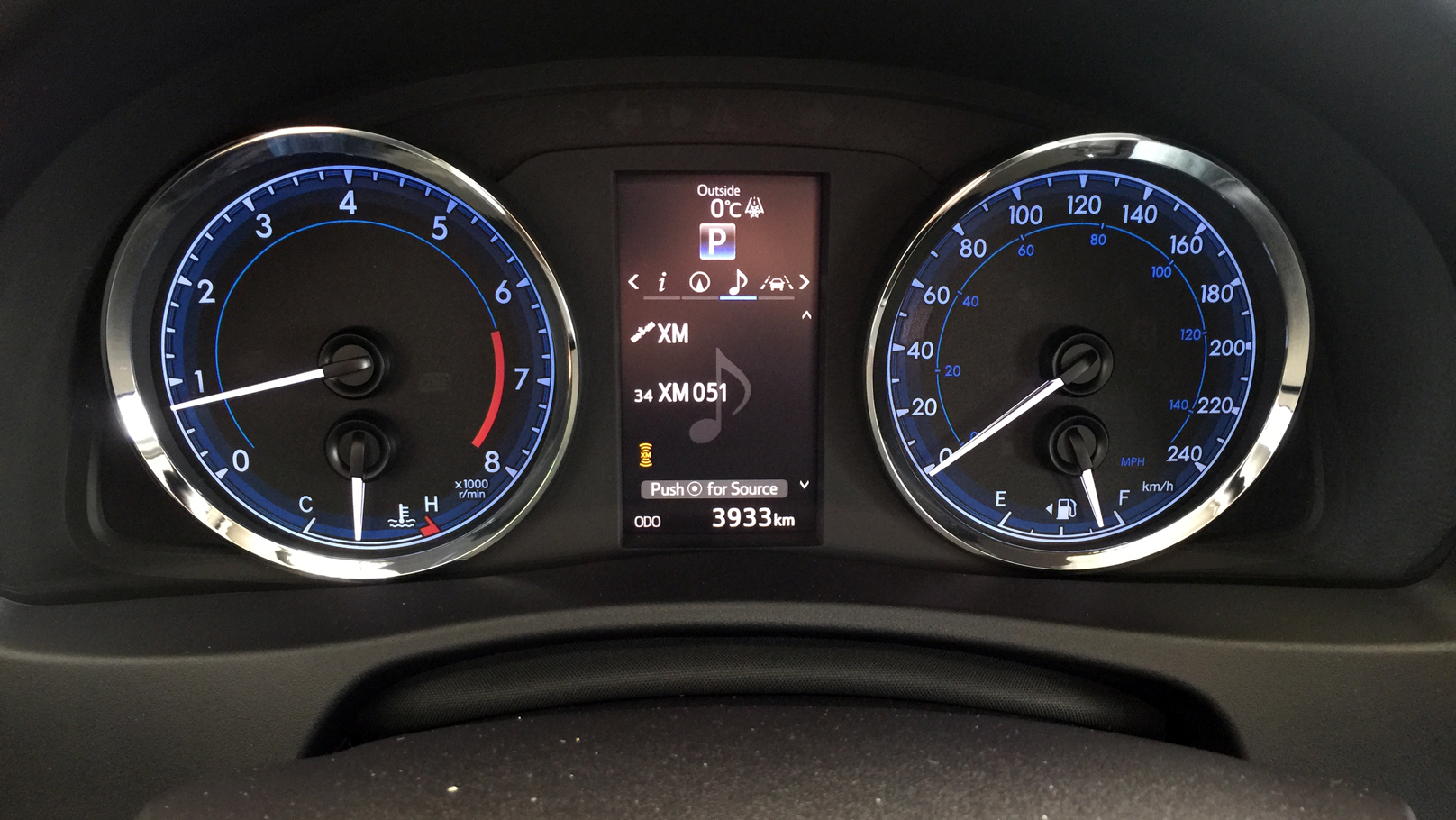 The stitching on top of the dashboard in the top-trim XSE model lends an upscale feel to the interior. The upper dashboard is comprised of decent soft-touch materials; working one’s way down to the floor reveals scratchy, hard plastic which belies the Corolla’s economy car mission, regardless of trim level. That’s the price paid for good economies of scale.

Set in the middle of the centre stack is a 7” touchscreen for the infotainment system. Its home screen presents a trifecta of information for fuel economy, audio settings, and navigation. Digging deeper into the available menus reveal a plethora of available displays ranging from album art for the song currently being played to efficiency tips for saving fuel. Speaking of which, we averaged 8.2L/100km over a week’s driving on winter tires.

Toyota has done us all a favour by not incorporating the climate control into one of these submenus, choosing instead to allocate separate real estate below the infotainment screen for a trio of rocker switches dedicated to the temperature, air direction, and fan speed. Thank you. These controls are intuitive and easy to use while wearing gloves. The car is quick to heat up, too

Our test vehicle was an SE trim, loaded to the gunwales with the XSE package, which delivers a 17” wheel & tire package, leather seating surfaces, power moonroof, navigation, and other bits and bobs. Oddly, this XSE was not equipped with a heated steering wheel, nor is one available to be fitted, even though such luxury is offered on lesser trims. Odd. 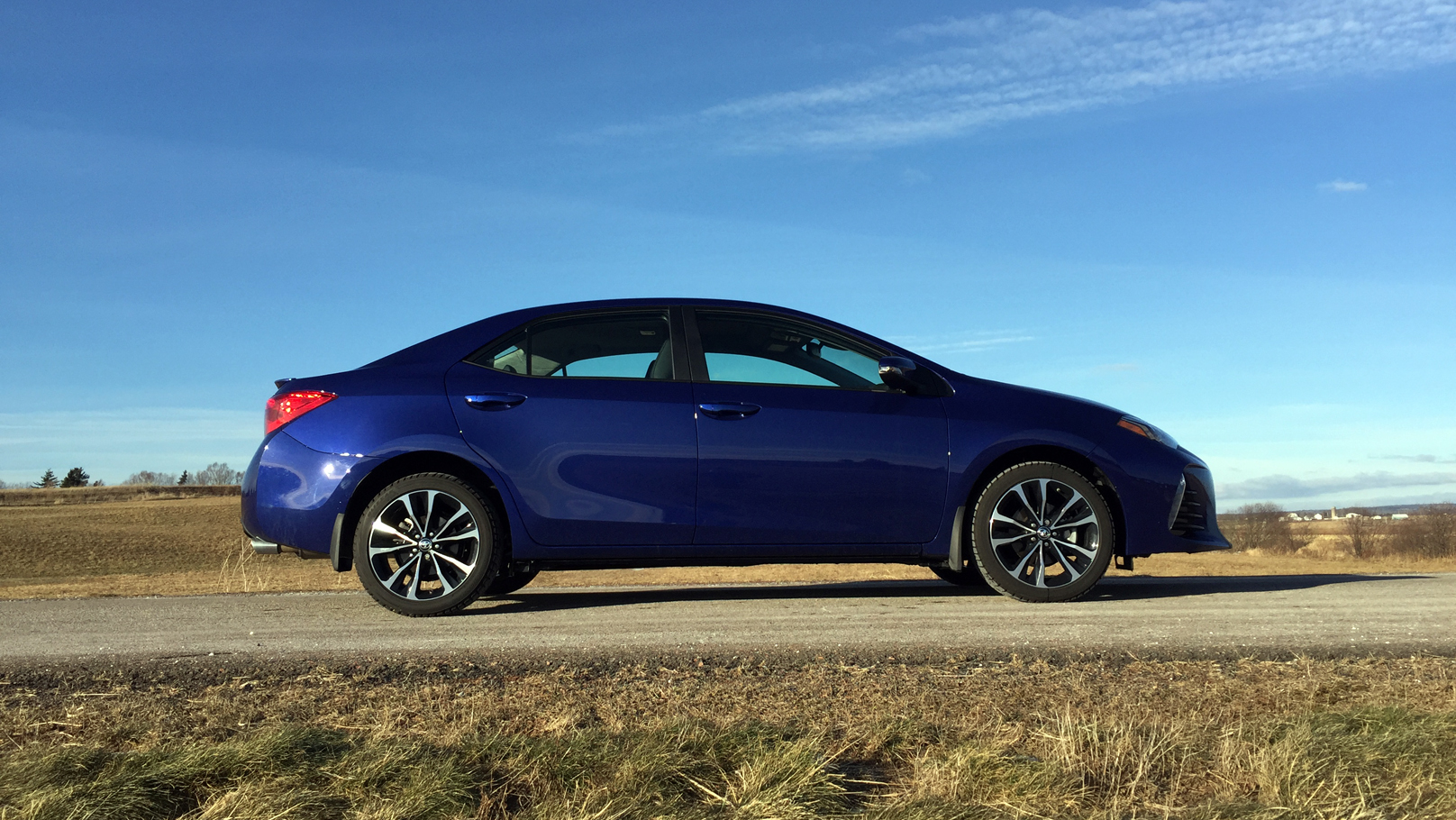 Shoppers deliberating a Corolla purchase should seriously consider popping for an SE model with either the Upgrade Package or the XSE package shown here. Why? These versions have rear disc brakes, while other Corolla trims are equipped with old-fashioned drum units at the rear. Modern discs offer better stopping performance and are not significantly more expensive to service and replace, a common argument of yore.

Ringing the bell at $26,900, including freight and fees, the most expensive Corolla does start to stray into base Camry territory in terms of price. If it’s a well-equipped Corolla you seek, try sampling an SE model with the optional Upgrade Package. For a reasonable $23,695, the leather seats will vanish but a heated steering wheel appears. Selecting an automatic transmission will add a grand to that figure.

Many people will be very happy with this car. It’s reasonably priced, has a great deal of interior room, and gets good fuel economy. For the first time, I think I finally understand the Corolla. Kale chips, on the other hand…