Fast-forward two years and our 2017 Protonic Red Edition BMW i8 isn’t any less futuristic looking, judging by the responses we received from everyone who came in contact with it.

I can remember exactly where I was when I first saw a BMW i8 on the road. It was Silver Metallic with Frozen Blue accents and was silently gliding along Sunset Boulevard in West Hollywood. I followed it for several blocks and really felt like I was staring at the future. That unique looking car fit in so well in the City of Dreams. Fast-forward two years and our 2017 Protonic Red Edition BMW i8 isn’t any less futuristic looking, judging by the responses we received from everyone who came in contact with it. And the response from onlookers was very positive and surprisingly knowledgeable. Most knew that it was a hybrid and seemed to like everything that they saw and heard about it as we filled them in on some of the unique features of this car.

Base price and options 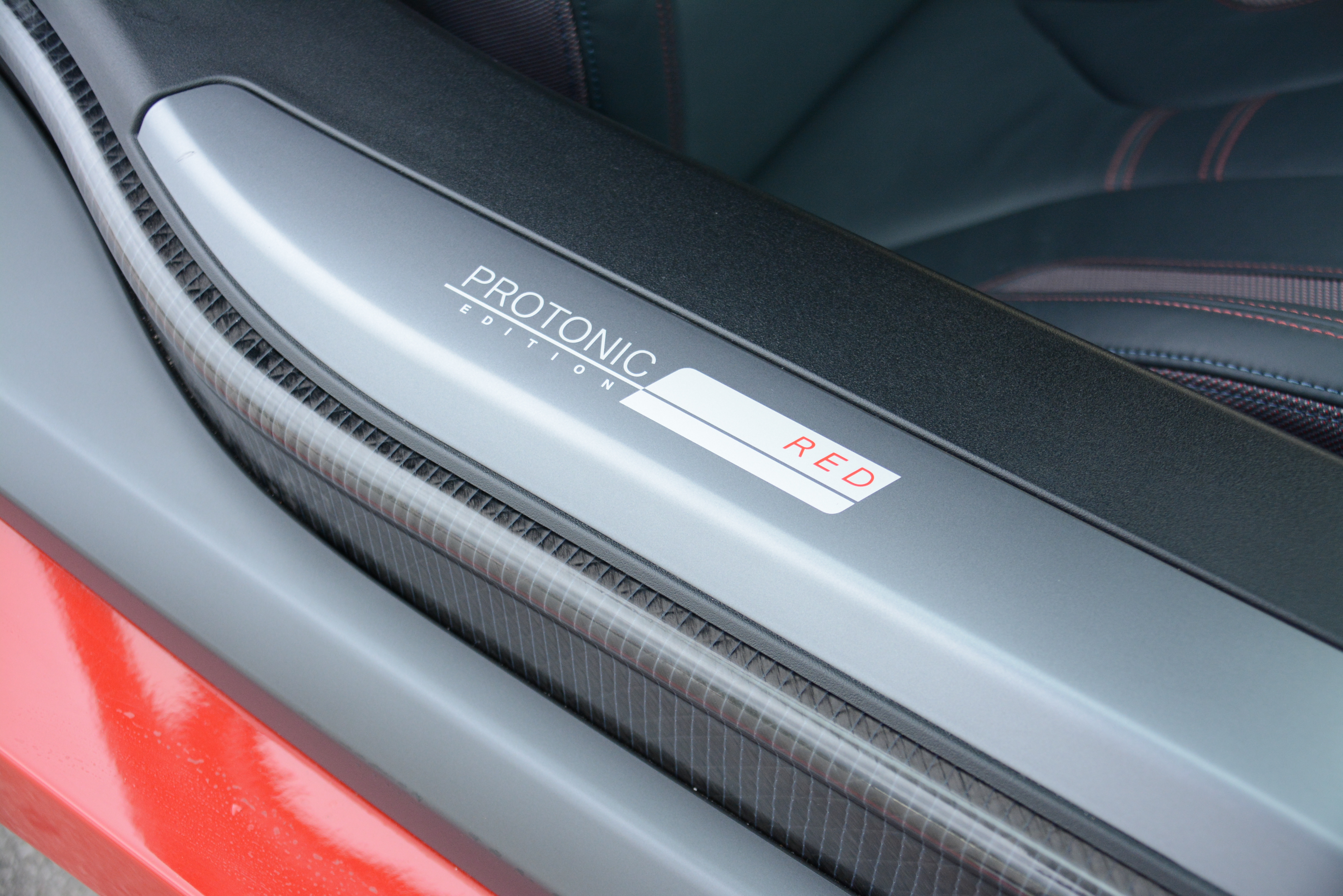 The colour of our tester is very unique, so much so that there will only be 15 Protonic Red Edition i8’s in Canada, with a correspondingly limited number in the US and worldwide. It is after all a $13,700 option which includes a leather engine cover, display key, anthracite roofliner, LED headlights and Proton Red Edition content. Our car was also fitted with the optional $8,500 LaserLight headlights. When you add those two options to the $149,800 base price plus a $2,095 delivery charge and HST, and hand over $200,000 to your local BMW dealer, you will get $3,272.65 in change. One more reason this will remain a very rare car.

Yes, that’s a lot of money, but a mid-engine Ferrari or Lamborghini will set you back one-third of a million dollars, plus options and taxes. And if you want an exotic hybrid car, the Porsche 918 Spyder costs about $1.1 million, and a hybrid Ferrari LaFerrari costs about $1.8 million. There is no question the Ferraris, Lamborghinis and Porsches are much more aggressive, extreme, ultra-high performance cars, but for the select few people who can afford them, the BMW i8 represents a lot of style, performance, and technology with a starting price just under $150,000.

Would I rather have a BMW M2 Coupé (which starts at $61,000) or a BMW M4 Coupé (which starts at $76,000) and more than $12,000 in my checking account for track days and new tires? Yes! But the BMW i8 is intended for a much different buyer, quite possibly someone who is moving up from an M car as they climb the corporate ladder and their kids move out so they can focus more on themselves.

You may also like: BMW i8 Presented with the World Green Car Award

The BMW i8 has two motors powering the 4 wheels; a 131-hp electric motor which drives the front axle and a 1.5 litre turbocharged inline 3 cylinder gasoline powered 231-hp engine which drives the rear axle. When the batteries are fully charged, the i8 is a front-wheel-drive all electric car. When you push the gear shifter to the left (once in Drive) you engage Sport mode, the rear engine fires up and you have a 362 hp 4-wheel drive electric and gasoline powered car which can sprint from 0-100 km/h in 4.4 seconds. In full electric mode the i8 will accelerate to 60km/h in 4.5 seconds

The car can be charged using the BMW i charging station which takes about 2 hours (these can be installed in your garage); or if you just have access to a standard wall plug, you can use the portable charger which takes about 8 hours, useful if you are not at home and you want to charge your car overnight. 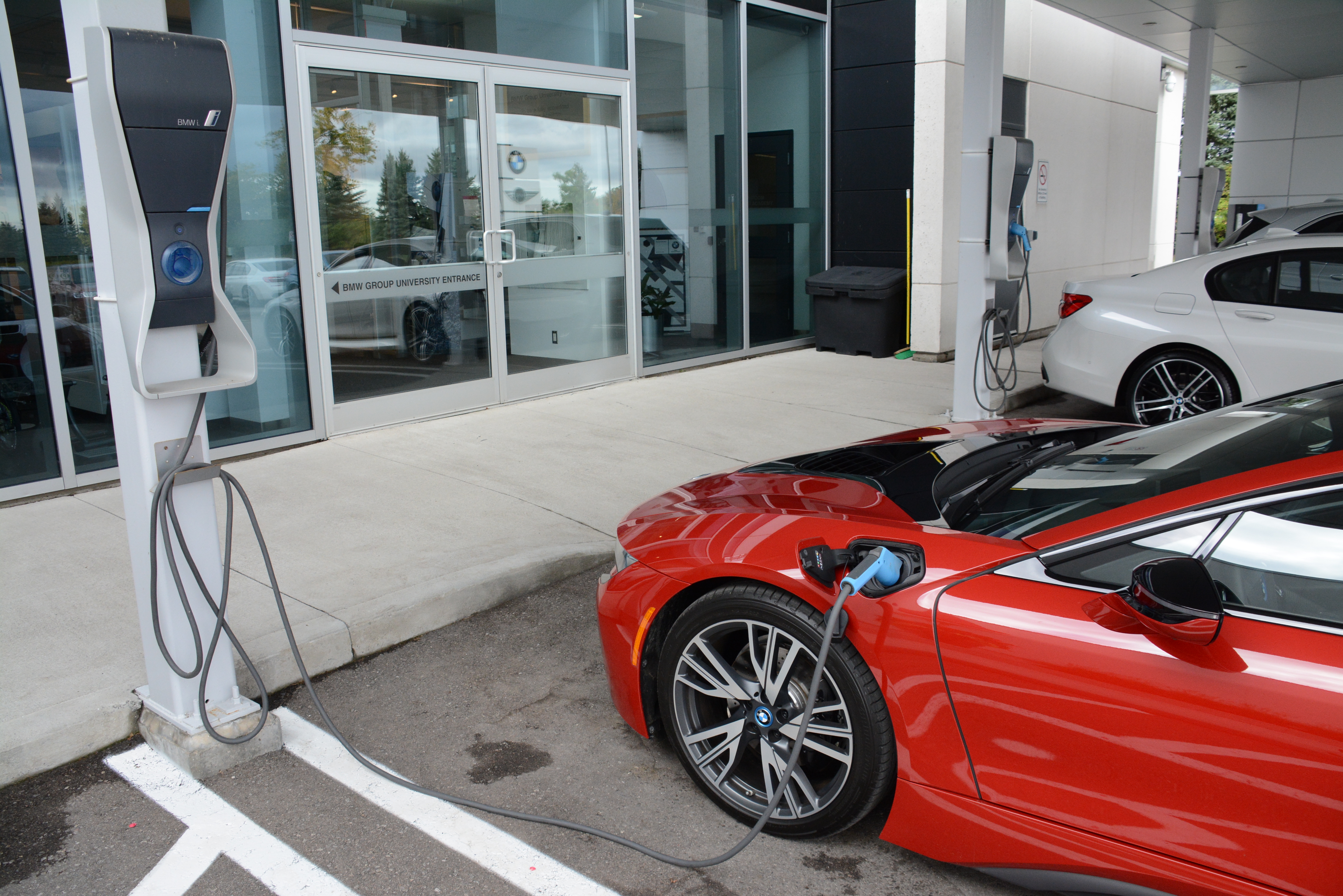 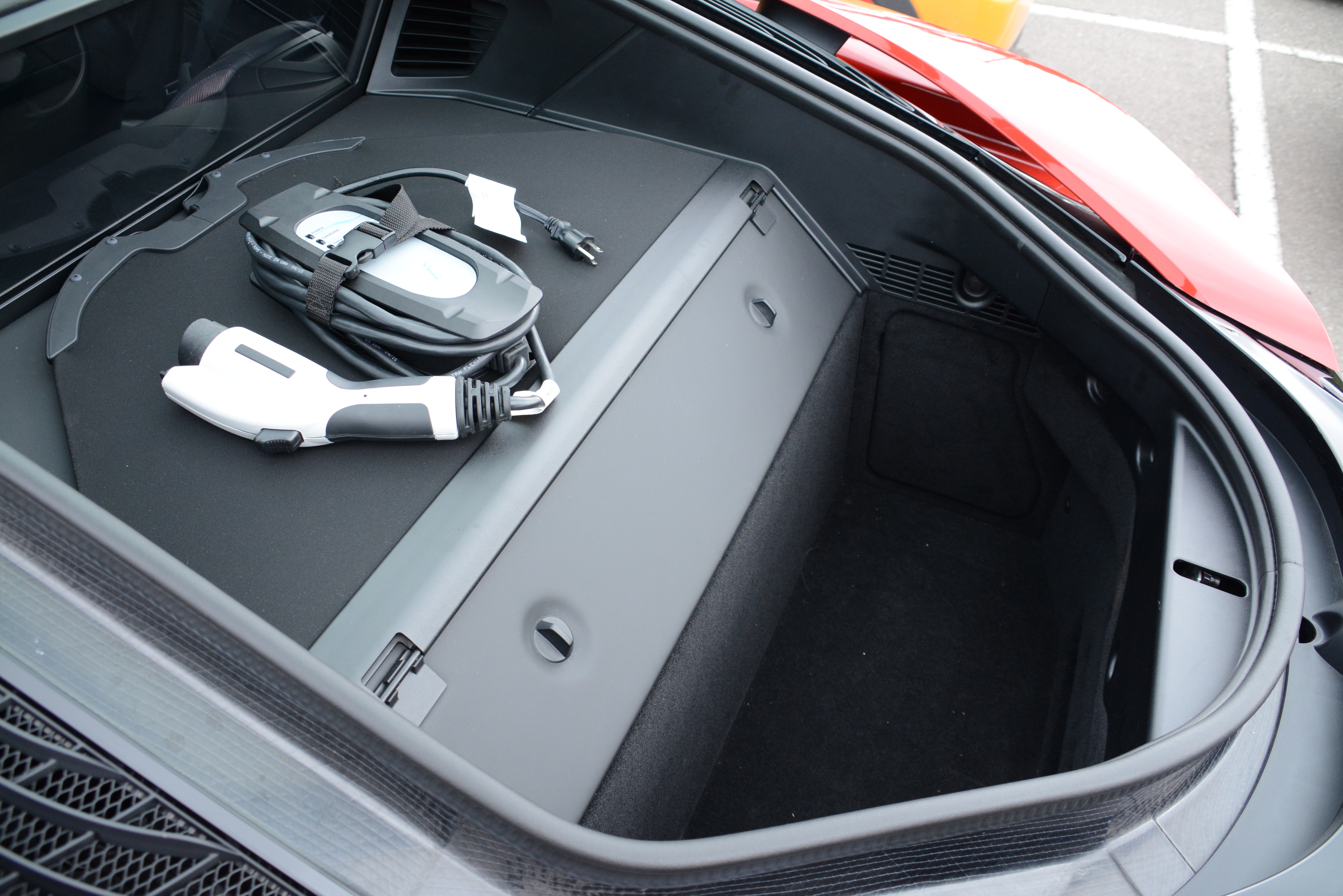 With a full charge you have a range of 24 kilometers and can drive up to 120 km/h. But there is no need for range anxiety with the i8. As long as you have gas in your tank, the 3 cylinder engine, with 236 lb-ft of torque, is always there to seamlessly transition from electric only, to gas and electric, or gas only, and has a range of more than 400 km. 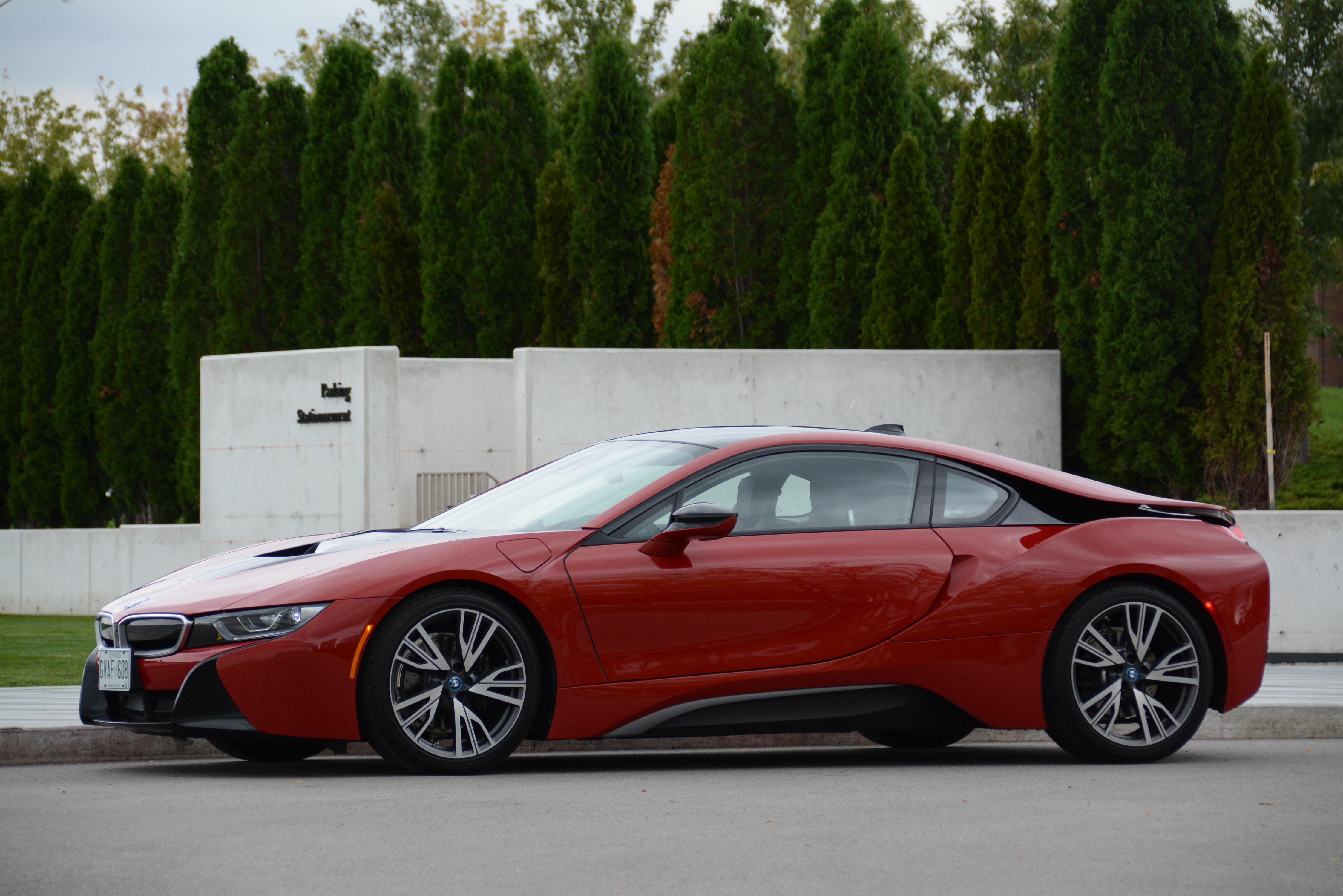 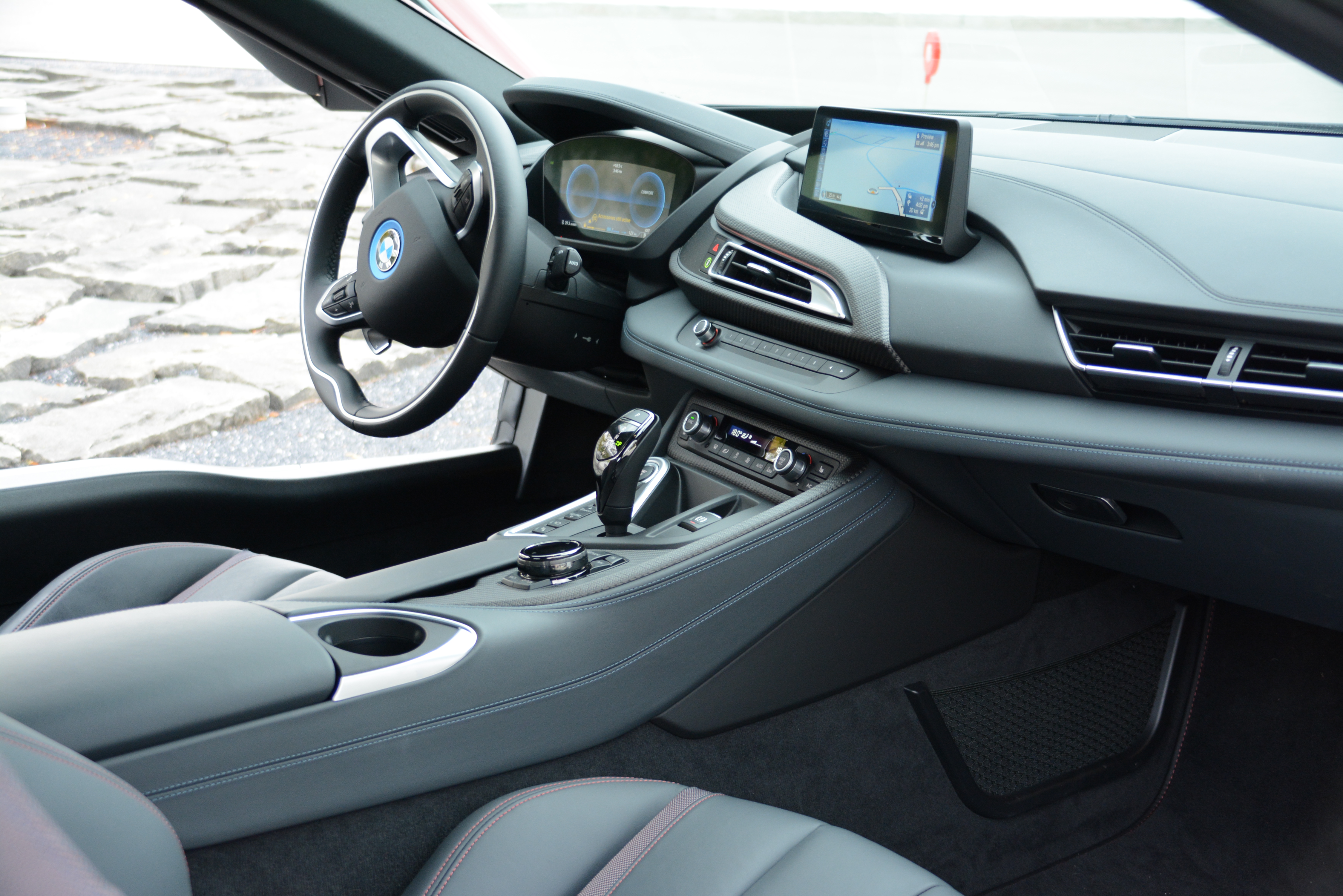 One of the show stoppers of this car, which is an integral design component of its overall futuristic look, are the scissor doors. Easy to open and close, it’s the steps in-between that require practice and fine-tuning. You need to look good doing this because you are always being watched by onlookers as this car attracts attention wherever it goes. To get in, you slide your rear end in first, then bring both feet across at the same time and put them in the foot well. To get out, it’s left leg first, lean on your left arm on the exceptionally wide door sill, then right leg and roll out, kind of. Once you get the hang of it, you can try to look as cool as the car. And should you ever need it, this is a 2+2, which has room for two small passengers in the rear seats. I drove with three occupants including my two nieces who had (almost) no problem climbing in and out of the front and rear seats. Lots of snapchatting emanated from the rear seats during our drive.

Conceptually the car is divided in two, with the upper part being what BMW refers to as the Life Module, or passenger compartment which is made of high strength Carbon Fibre Reinforced Plastic (CFRP). The lower portion of the car is referred to as the Drive Module, which contains all of the running gear and is made of aluminum. The i8 weighs 3,455 lbs and is built using sustainable materials and green building techniques.

You may also like: Driving the magnificent Pagani Huayra 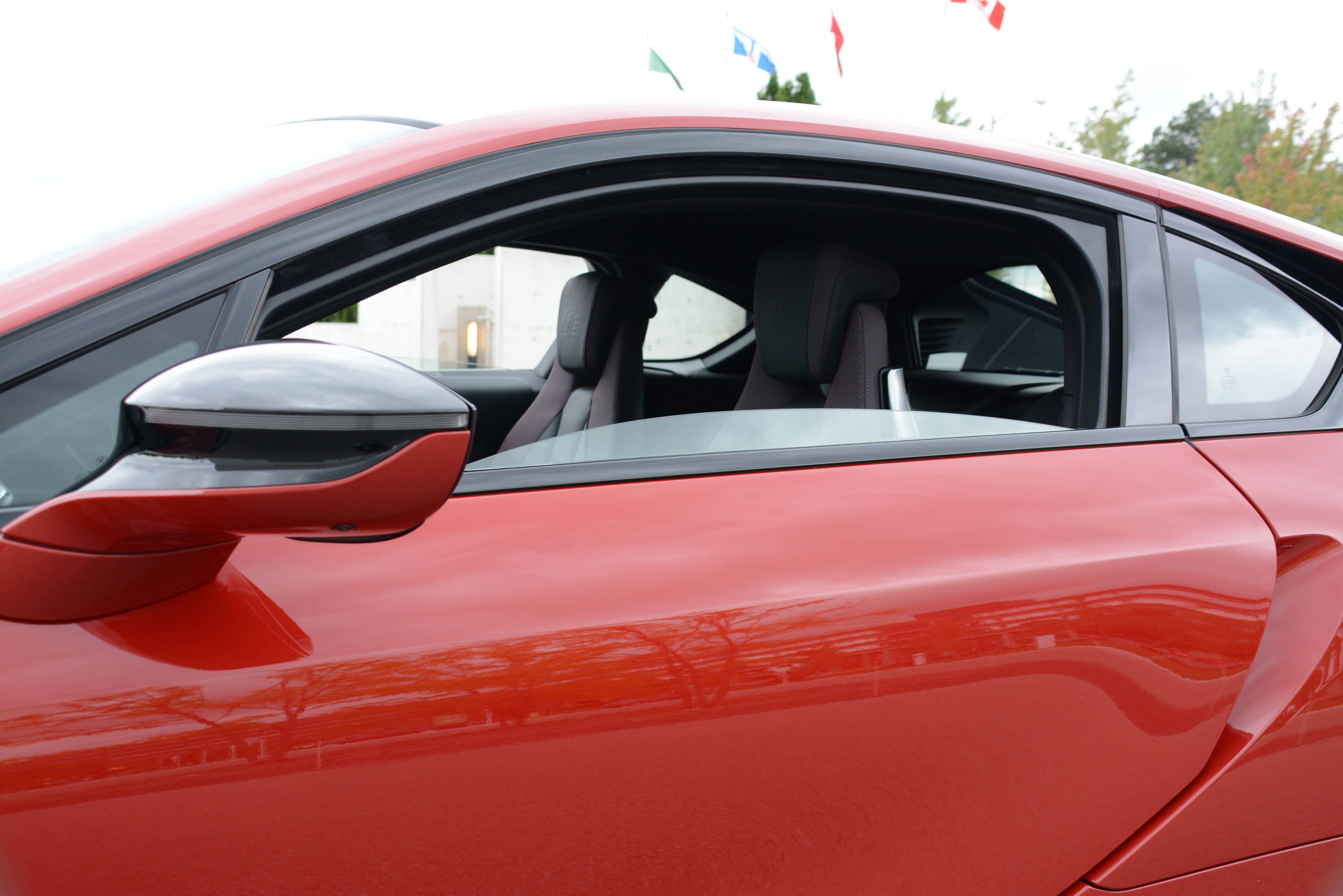 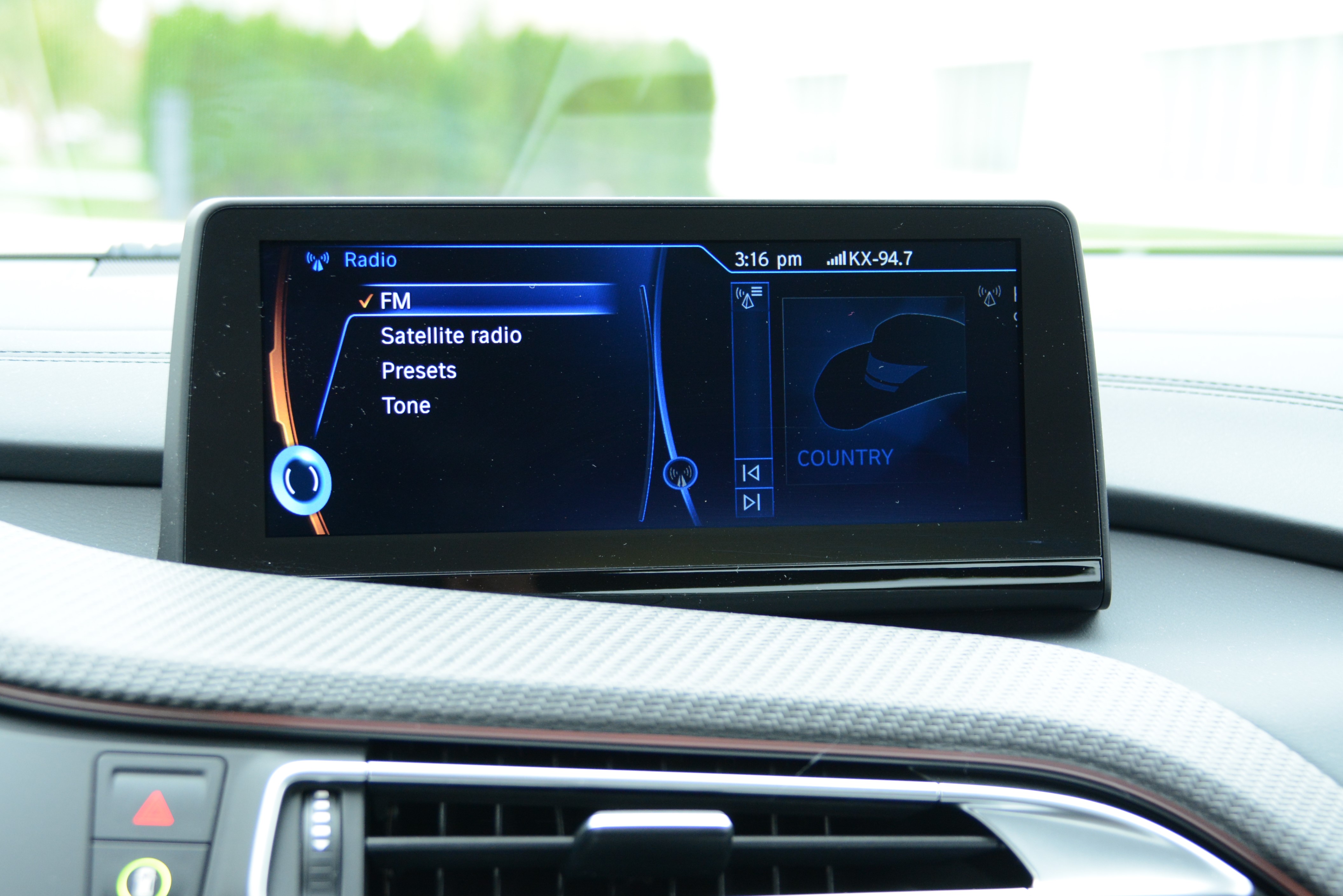 My two nitpicks; the driver and passenger windows do not go all the way down. In the fully opened position there is more than an inch of window sticking up. Driving with the windows opened and your elbow out isn’t really an option because your elbow rests on top of the glass, which is not very comfortable. The car door isn’t large enough to conceal the entire window. Possible solution, make a slightly smaller window with a correspondingly slightly larger door?

Other nitpick, no AM radio. FM and satellite radio are available, as is the ability to connect an iPod and other MP3 players but AM is not available. Living in a large urban area with the desire to tune in to news and traffic reports is pretty common. Some AM stations are now available on HD radios, for example 680 News is available on KiSS 92.5 when you switch to HD channel 2. I missed not being able to tune in to the sports and news stations which are typically only available on AM.

The BMW i8 is a surprisingly normal car to drive. You know you are getting into an exotic car as you walk towards it but once successfully inside, everything about this car is relatively simple, easy and quite intuitive to use. With a little bit of agility, this could easily be used as a daily driver, especially because of its all-wheel-drive capability. If you don’t want to fuss with the car at all, just put it in drive and off you go. The car takes care of determining if you are in electric, gas plus electric, or gas only mode if you have run out of battery charge. If you feel like participating in the driving experience, you can move the shifter to the left, engage sport mode and start paddling your way up and down through the 6-speed transmission. And with this car’s surprisingly boisterous sounding gasoline engine, the exhaust note is very rewarding as you generate very sporty sounding upshifts and downshifts.

A 24 km battery range does not sound like a lot. If you have a short commute to work and back and or access to a charging station at work, then you could achieve an electric-only commute. But it seems like there is a lot of technology involved in this car for a relatively limited amount of return on that tech investment. But one thing is for sure, you can feel less guilty about driving an exotic car knowing that in hybrid mode you aren’t burning fossil fuels or emitting carbon dioxide into the atmosphere.