Small but significant tweaks make this luxury sports sedan set for another long run at the front of its class. The new 5 is impressively quiet, and promises to be more fuel-efficient, too.

SINTRA, PORTUGAL:  Replacing a failure in any business is easy — toss everything out and start over.

Replacing a success is considerably trickier.

Your customers obviously liked what you were doing. But stand still and your competition will trample you.

That was the challenge facing BMW when it came time to replace the 5 Series sedan, which has been a stalwart of its lineup since 1972.

This also makes it the company’s longest-serving model designation. 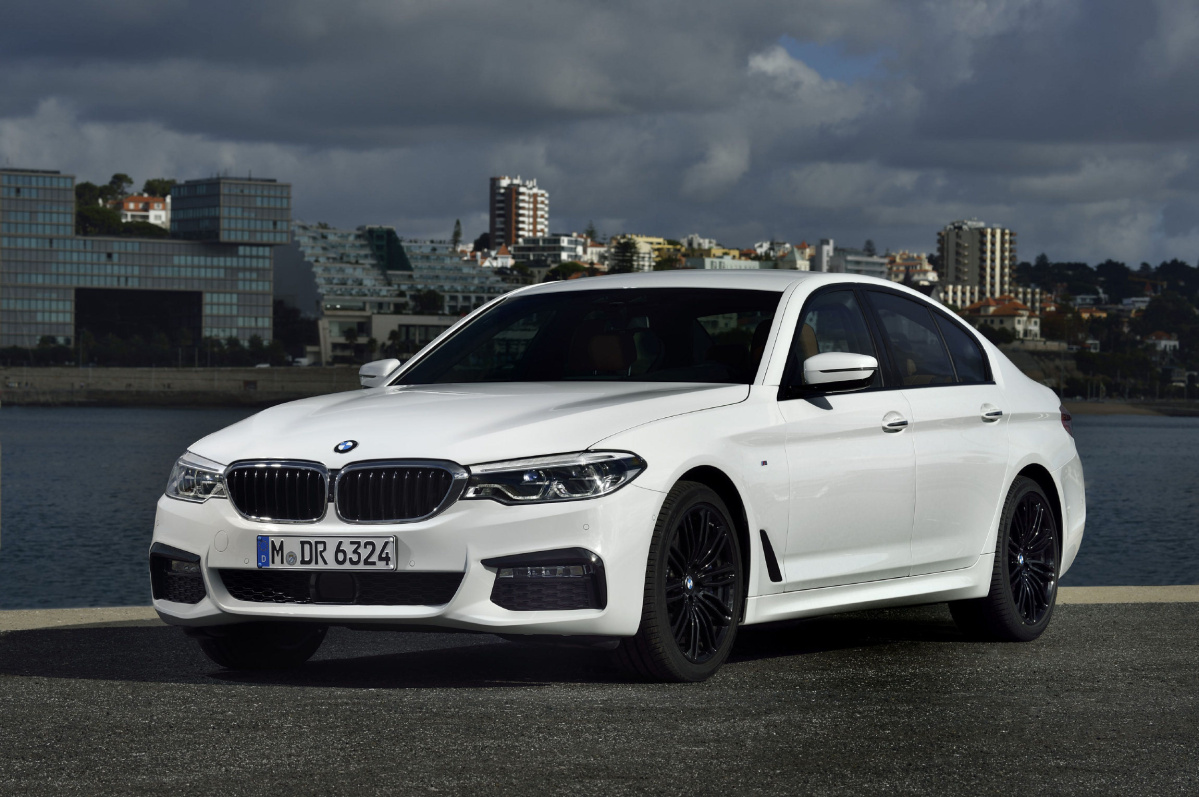 BMW 5 Series, Portugal BMW 540i The new BMW 5 Series is up to 100 kilograms lighter than before, thanks to increased use of lightweight materials.

The seventh-generation 2017 model line goes on sale in spring next year. Pricing has not been announced, but it surely won’t be too far off the current range, which starts at $60,500.

BMW calls the 5 Series a ‘business sedan,’ which apparently it is in Europe. Big enough to be comfortable for those long-distance runs, but not so big as to be ostentatious.

Not sure it carries the same rep here. It is more of a luxury sports sedan.

Dimensionally, it is 29 millimetres longer, 8 mm wider, 15 mm taller, and wheelbase is up by 7 mm. In other words, about the same as before.

Styling tweaks are also subtle, and most noticeable if you compare the current and upcoming new generations side-by-side.

It almost looks like the old car has been stretched along its longitudinal axis; the car appears longer and sleeker. Looks lower, too, although the tape measure says that’s an optical illusion. It almost makes last year’s car look a bit pudgy.

Not an illusion this time, as the new car is up to 100 kilograms lighter than before, thanks to increased use of lightweight materials.

Although the body isn’t that much larger, more real space has been carved out, especially for rear-seat passengers.

A bit of optical trickery here, too, though, as the lower dash and free-standing centre control panel give the illusion of spaciousness.

Materials quality has been upgraded, too; good job, as BMW was already behind Audi, and Mercedes has made great strides here recently, too.

‘Connectivity’ is BMW’s buzz word du jour, with every known means of communicating with the outside world being available.

It can even communicate with other cars if they all belong to the ‘interconnected BMW fleet,’ by relaying messages about traffic, collisions, or inclement weather to each other. I don’t think this system will be available back home, but its time will surely come.

A wide range of powertrain options is available globally; as usual, we will only get a limited number thereof. Just two at launch, in fact — a 530iX and 540iX.

The X means full-time four-wheel drive which has become de rigueur in this market segment in Canada.

As has become the norm these days, the model numbers are meaningless with respect to the hardware.

Interestingly, that’s 0.2 quicker than the rear-drive 530i, the added grip of the four-wheel drive more than compensating for the 55 kg extra weight.

BMW gives a 0-100 km/h time of 4.8 seconds, a full second quicker than last year’s comparable model, and again 0.3 seconds quicker than its rear-drive stablemate, despite the latter’s 65 kg weight advantage. 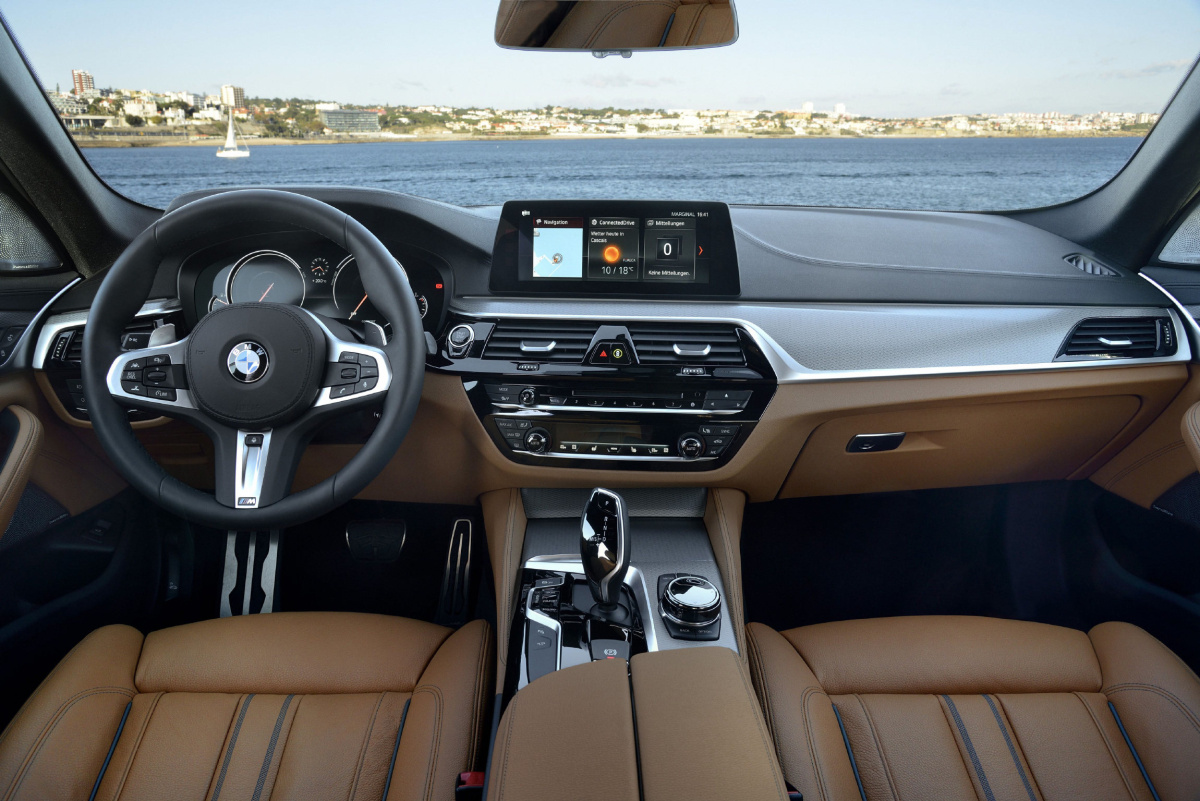 BMW 5 Series, Portugal BMW 540i The BMW 5 Series has always been a good handler for a fairly large car. With revised and lighter suspension components front and rear, it proved itself again on these twisty roads, with excellent turn-in, high levels of grip, and strong stability.

An M5 will surely join the party, probably as soon as mid- to late next year.

An all-too-brief spin across the Tagus River south of Lisbon, along the coast westward from Setubal, back across the Tagus, along its right bank and back into the hills of Sintra gave us just a hint of the new car’s capabilities.

We were assigned a 540i, the rear-drive model we won’t actually get. The roads were clear and dry, so the lack of four-wheel drive probably wouldn’t have affected our impressions that much. And the engine was representative.

BMW long ago largely got rid of turbo lag; press the loud pedal and the car responds with satisfying alacrity.

The eight-speed automatic shifts decisively for the most part; you can speed things up by selecting a Sport profile with the Driving Experience Control, or just using the shift paddles.

The 5 has always been a good handler for a fairly large car. With revised and lighter suspension components front and rear, it proved itself again on these twisty roads, with excellent turn-in, high levels of grip, and strong stability.

It’s a car that makes you feel like a better driver than you probably are.

That said, you definitely ARE a better driver than the car is by itself when you invoke the semi-autonomous features. This just seems so non-BMW — when did it become the Ultimate Being-Driven Experience?

One brief test and you’ll never switch the self-steering on again, as the car hunts and pecks trying to find itself within the lane markings. The automatic lead-follow cruise control is a little better.

But in modern traffic in most countries, you still have to be very careful, because even when your car is set to follow the car in front by the smallest available distance, the gap is still big enough for two or three taxis to dive-bomb it.

And that’s here in laid-back Portugal. I’d hate to try this in Beijing, where the first rule of the road is “No gap is too small.”

An interesting advance comes with the fuel-saving engine idle stop/start system. It connects to SatNav and camera data, so the engine won’t shut off in situations where it might be inconvenient — entering roundabouts, for instance.

The seats provide good comfort and support in spirited driving.

The big central touchscreen is fairly easy to work; you can swipe the tiles back and forth to get the one you want, pinch and zoom to your heart’s content. 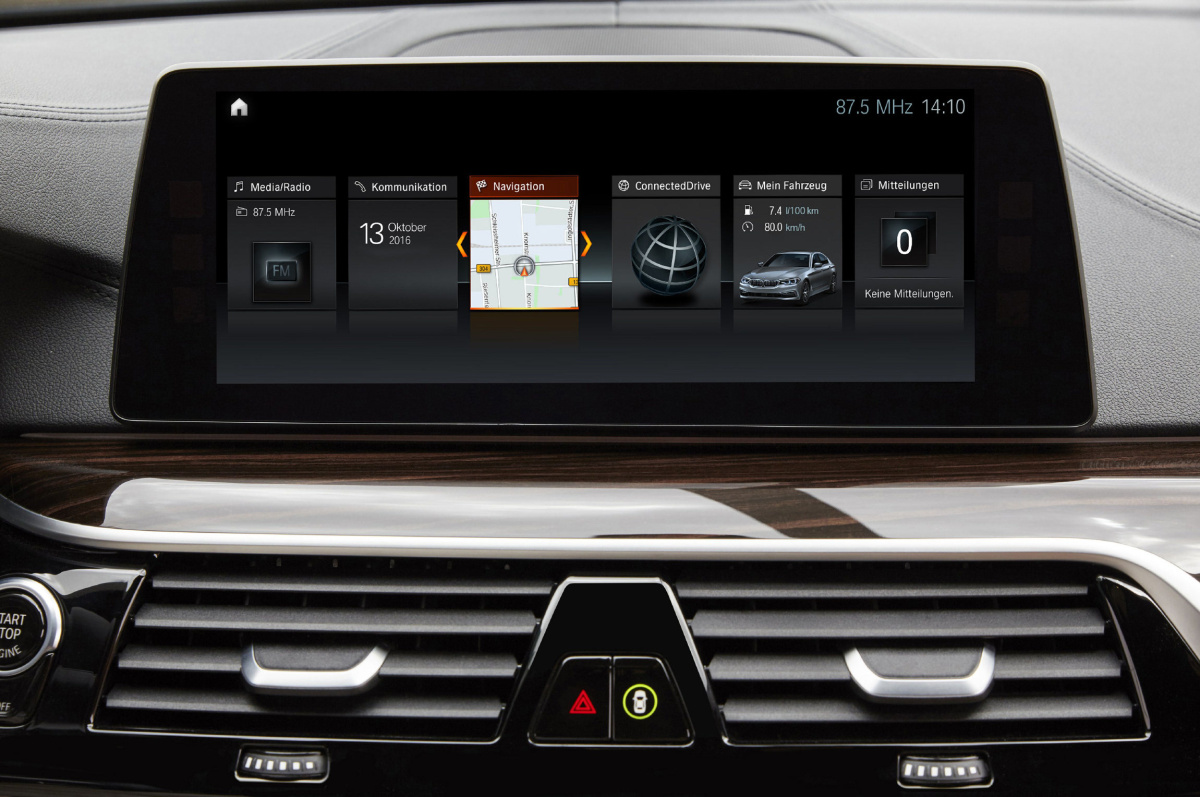 BMW 5 Series, Portugal
The Head-Up Display (HUD) has a 70 per cent larger display than before, and offers a wide range of colourful read outs.

Funny; if you do this with your cellphone held close enough to your line of sight so you can still see the road, the cops will run you. Bend down, lean over and stare at the centre screen to do the same thing, and that’s just fine.

The Head-Up Display (HUD) has a 70 per cent larger display than before, and offers a wide range of colourful read outs, if you like that sort of thing. I don’t; I find it all distracting. But you can switch it off.

Portugal has played its EU card well, getting the Germans to pay for a lovely network of largely empty, well-surfaced highways.

That may be why BMW’s unfortunate devotion to run-flat tires (a.k.a. ruin-ride tires) didn’t seem as big an issue as it usually does. Or maybe the suspension dudes and the tire dudes are beginning to figure this out.

The new 5 is impressively quiet, and promises to be more fuel-efficient, too.

So, it doesn’t look like a dramatic overhaul, but as noted earlier, it didn’t need one.

Instead, it has been improved by small to significant degrees in virtually every area.

It should be set for another long run at the front of its class. 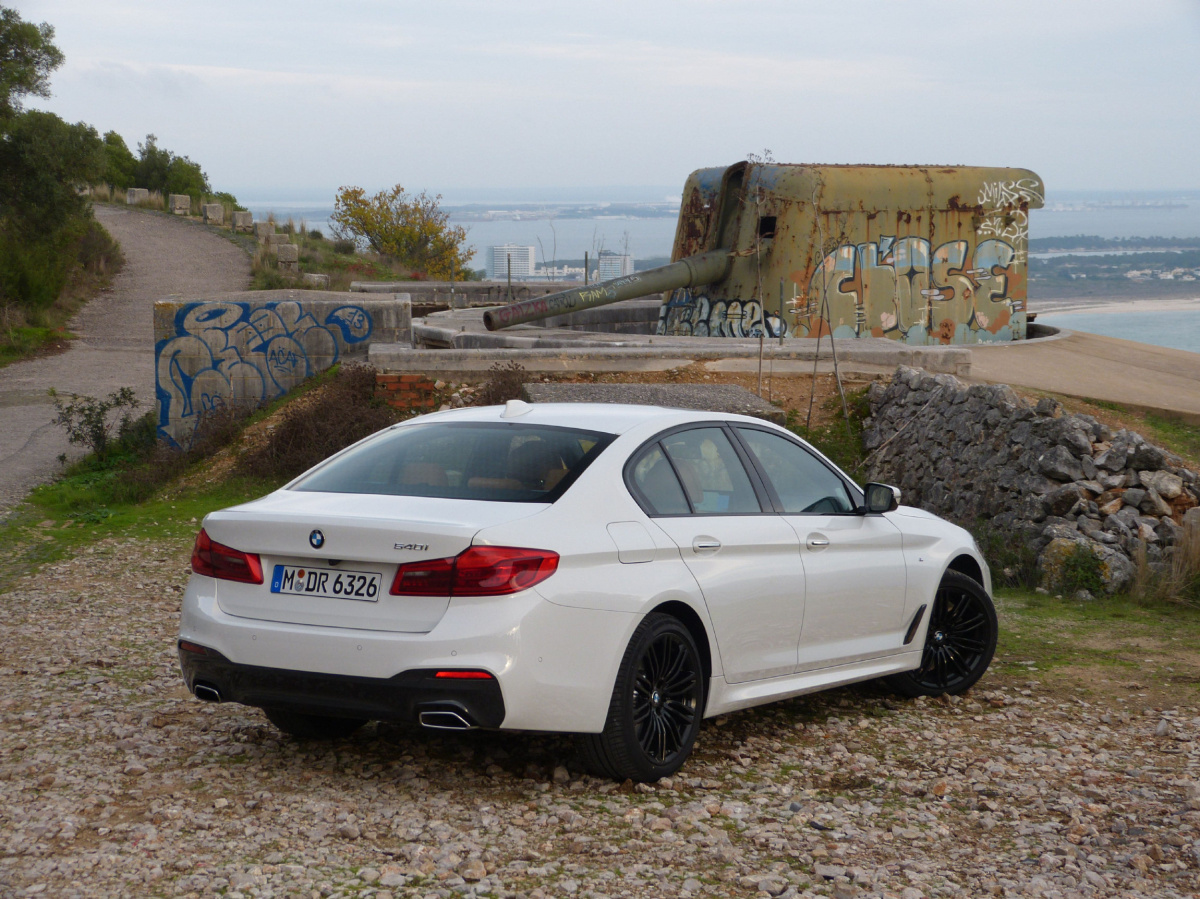