This isn’t your typical “just ease my range anxiety and make sure I can transport my family” EV; this is the Tesla Model S in P90D form, a full EV – no Volt-esque range extending petrol engine here

Writing about electric cars is a little different than doing so on more traditional powertrains. A whole new rack of elements comes into play; charge times, range, power types (kwh vs hp, combined power figures and so on) all join the regular test drive elements that revolve around comfort, practicality and so forth.

That’s writing about “electric” cars in general; writing about this particular electric car, however, is a whole different ball of wax. This isn’t your typical “just ease my range anxiety and make sure I can transport my family” EV; this is the Tesla Model S in P90D form, a full EV – no Volt-esque range extending petrol engine here – that beat the 707 hp Dodge Challenger Hellcat on the dragstrip. 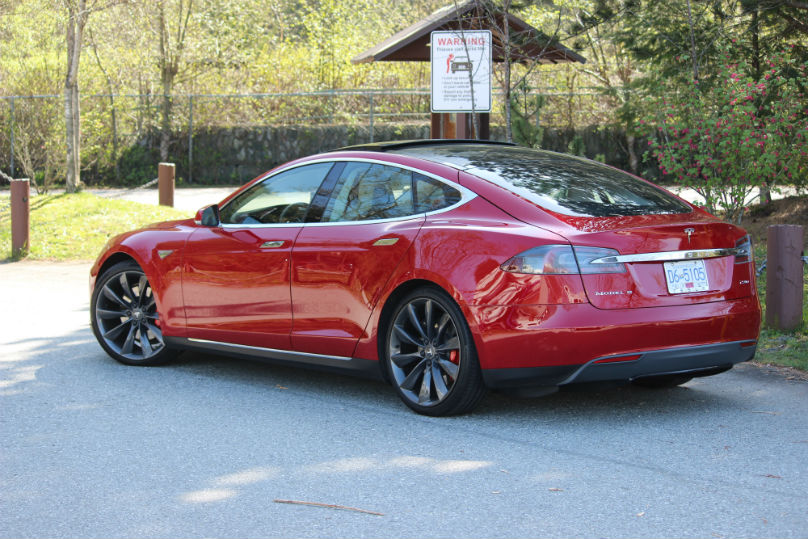 Without even knowing this is the highest-po of all current Model Esses, my tester will turn a few heads. The optional gunmetal 22” turbine wheels and gorgeous candy-apple red paint have seen to that, drawing your attention even before you lay eyes on the subtle “P90D” badging on the rear fascia. We recently published a story about the best sleeper performance sedans of all time, but this one could very well trump them all for other than that badging, there is nothing else to differentiate this particular Model S from any others. You can configure your base car to look just like this.

The overall look of this and any other Model S is one of monochromatic cleanliness, a quality helped by the fact that there are no gas tank doors (obviously) and, on the surface, no charge ports, either. That’s because it’s integrated into the corner of the taillight lens, effectively hidden from view, exposing itself only when asked.

Up front, the look is kept clean thanks to there being no need for a radiator, which also allows Tesla to hide the Model S’ forward collision and adaptive cruise sensors where the grille would otherwise be.

Thing is, while the car is undeniably handsome, I wouldn’t say it’s the most exciting thing to look at. Yes, the LED DRLs are certifiably Audi- and Lexus-esque in their application, and there’s the wheels and all that, but if you were to keep the standard 19” wheels and forego paying for that fancy red paint, it’s a bit of a plain car, the Model S. The shape helps deliver a miniscule coefficient of drag, but that does not necessarily an exciting styling package make.

Inside the story is kind of the same, assuming you haven’t alighted the plethora of displays that make up your entire dash. We’ll get to those in a minute.

Tesla has gone to the Mercedes-Benz parts bin to source their window and stalk controls, which is no big deal if you don’t mind some vanilla parts from another manufacturer in your special electric car. Those Mercedes parts, meanwhile, are the only real moving parts inside the cabin, this side of a button for the glovebox release, and a button for your hazard lights.

Everything else is all screen, all the time. Speedometer? Digital display. Charge port release? Yep. Sunroof? Activated via the 17” – yes, you read that right – touchscreen that dominates not just the dash, but the cabin as a whole. You can open the roof to any percentage, though, simply by sliding your finger, Apple iDevice style, across the screen. Navigation, internet, charge indicator, sat radio are all accessed via that monitor. I guess that’s not so far removed from what’s happening throughout the industry, but it’s taken to the nth degree here, that’s for sure.

The interface itself is massively clear, responsive and fairly easy to operate. The only issue I take with it, though, is that a lot of poking has to be undertaken in order to take care of everyday tasks like climate control, drive mode selection and infotainment (there are some redundant controls on the steering wheel, however) and distracted driving being what it is these days, well, let’s just say there’s something to be said for a knob or two. With buttons, dials and knobs, you don’t have to look away from the road as much; with a touchscreen – especially one with this much real estate – you do have to do some searching.

And believe me, you need to keep your eyes on the road when driving the P90D, especially if you’ve selected the “Ludicrous” drive mode, which unleashes the full 713 – SEVEN HUNDRED AND THIRTEEN –torques, made possible thanks to the inclusion of a 90 Kwh battery that sends power to two electric motors. Which, in turn, drive all four wheels.

It’s not so much the fact that it makes that much power, but more just how accessible it is and the manner in which the Model S P90D goes about its business.

Since there are very few moving parts in the drivetrain, the car’s attitude is incredibly docile. There are no vibrations from cylinders reciprocating or gears spinning; just a slight buzz as you dip into the throttle. Which, if you dip in deep enough in Ludicrous mode, will press you and your passenger’s shoulders into the nicely-supportive seatback unlike anything you’ve driven before; you’ll hit 100 km/h from zero in just over 3 seconds. Then again, you could be doing 0, 50 or 100 km/h before you throttle in, and you’ll get the same, banal slug of acceleration no matter what. It is so bloody fast, this thing and the fact that you’re not hearing all that much while you’re at it (as you would in, say, a Hellcat or any number of supercars) just adds to the space-aginess of the whole Model S experience. It may not look or act in a manner that will earn it a spot in the next The Fast and the Furious iteration, but darned if it can’t take most of the cars from that movie series to the cleaners on the track. Or, perhaps more pertinently, the drag strip. 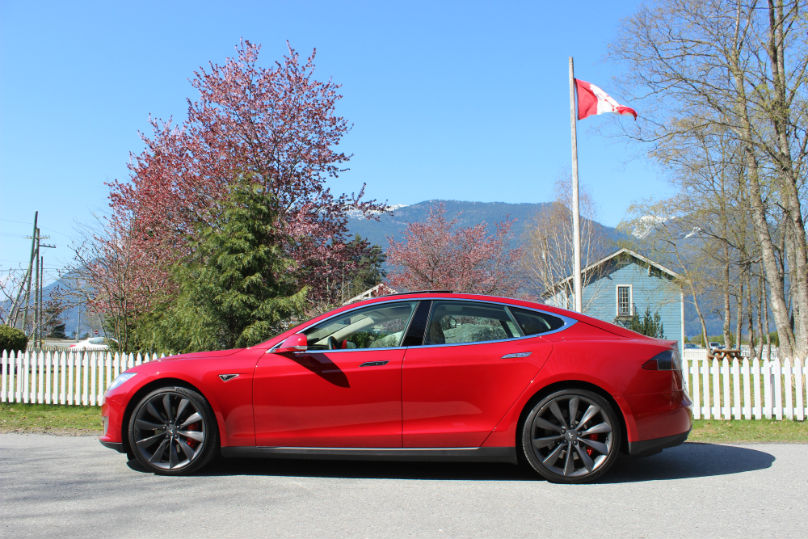 Thing is, the Model S has the ability to do an about face and cruise the boulevard, keeping its occupants in supreme comfort while it’s at it. Even the driver if they decide to make use of the autopilot feature, which comes as part of a $3,300 option package. It acts pretty much as advertised; it reads the traffic all around you as well as the lane markings and can literally navigate the city streets all on its own, requiring only braking input to bring it all the way to a stop. Then, if you so choose, it will park itself, too, in either a parallel or perpendicular spot.

Or, if you’d rather do the driving yourself, different steering and suspension settings – our car had the optional ($3,300) air suspension package, smoothing things out even further – mean most drivers should find a set of settings that will keep them happy.

As much as the on-road performance is impressive, electric cars – no matter the creed – will always be judged not just how they drive, but how efficient and easy-to-charge they are, too. Tesla has the competition beat for the time being thanks to one big advantage: the company’s network of superchargers.

Spread across Canada, Tesla claims these level III units will charge the Model S from 0 to 50% in 15-20 minutes; we went from 134 to 323 km of estimated range in about a half hour when we tried. Tesla claims that a fully-charged P90D – with its larger battery back – is good for 435 km, meaning we saw a 43% charge increase.

We started our 67 km journey with 217 km on the clock, and our finishing with 134 means our Model S was off the pace a little. The variance was less than 20 clicks, however, and thanks to the ever-expanding availability of the supercharger stations (you can use standard charging stations, too, and those are even more plentiful), range anxiety should be greatly reduced.

Of course, all that piece of mind comes with a price – literally. After all our car’s options – autopilot, cold weather package (heated steering wheel, seats), fancy paint, wheels, air suspension – our car came out to an eye-watering $160,700 before taxes. That’s roughly the cost of any number of uber-luxury coupes, sedans and SUVs available on the market today, including examples from Mercedes’ hot AMG line-up and BMW’s M vehicles. It’s a luxury vehicle, I get that but to have to lay out $1,300 just to get heated seats is a tough pill to swallow, especially in Canada where base models of much more basic cars are getting these features as standard. I know, I know; they’ve sold thousands of these in California, where chargers are plentiful and cold weather, well, isn’t. I get that but still; that’s big money, any way you slice it.

In the end, though, Tesla remains a boutique brand that sells boutique cars. For many, the quietness of the operation (and that neck-snapping acceleration, of course) and the knowledge that you’re driving one of the most advanced EVs on the market is worth the price of admission. 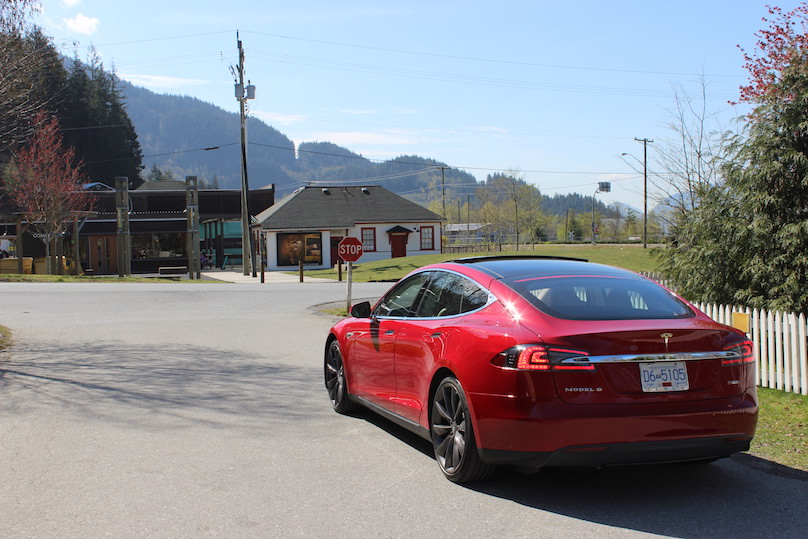