The 2016 Nissan Maxima -Nissan’s Four-door Sportscar is back.

What’s Worst: Lack of AWD in this segment.

What’s Interesting: Maxima lives up to the Four-door Sportscar type.

2016 Nissan Maxima at a glance

NASHVILLE, TN: Nissan is calling itself the fastest growing full line car company in Canada and it’s products like the 2016 Nissan Maxima that back up that statement.

Only a decade ago, it seemed Nissan had lost its way with products such as the Cube, Titan and decidedly drab-looking Sentra, with the evergreen Altima carrying the banner.

But it was the Maxima that seemed to suffer the most compared to the days when a Maxima with 3.5-litre V6 and a slick manual transmission was a sedan to reckoned with and known as the “Four-door Sportscar”.

Things have turned around in Canada with 21 months of consecutive growth and a sales increase of 51 per cent.

And there is exciting product, such as the red-hot selling $9,998 Micra with 11,000 purchased and counting to the much-awaited Cummins diesel-powered Titan HD pickup.

But the four-door sportscar was not forgotten and it’s back with a vengeance in the form of the 2016 Nissan Maxima model. 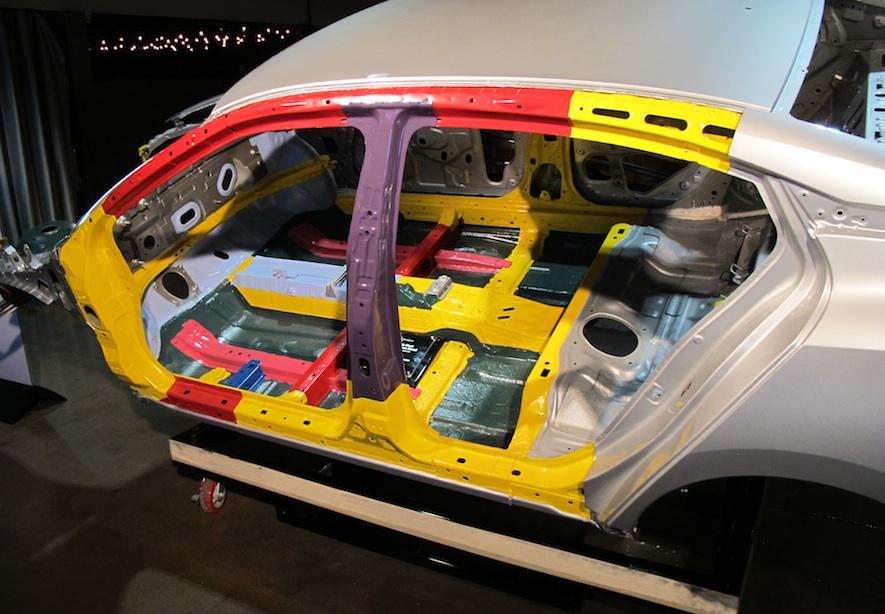 Weight is down by 80 lb and power is up to 300 hp along with a 15 per cent increase in fuel economy.

And to make it more attractive, Nissan has a quite simple pricing strategy.

RELATED: The 2016 Nissan Maxima unveiled in New York along with 2016 Infiniti QX50 and QX30 concept

The SV is hardly base with leather seats, heated steering wheel/outside mirrors/front seats, rearview camera, front and rear sonar parking assist and navigation system, to name a few, as standard. 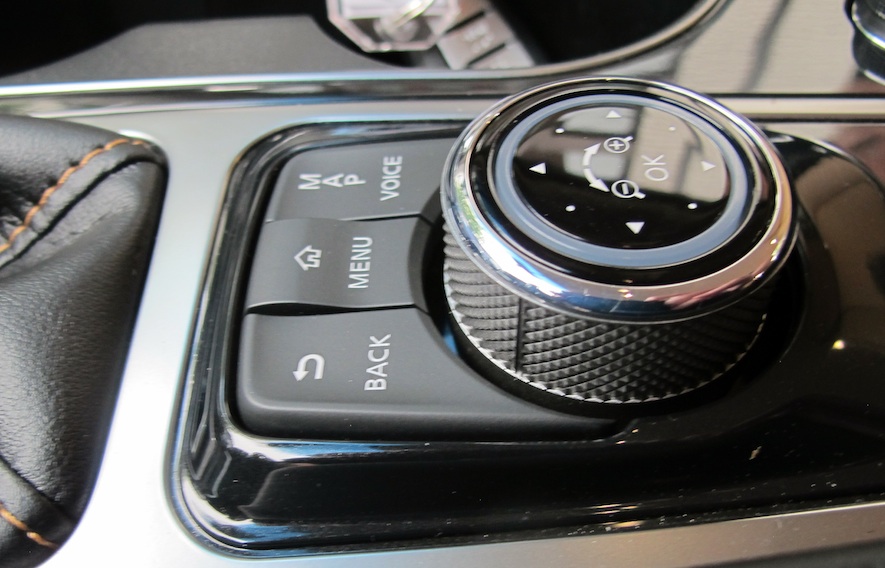 There is too much to list but the SL adds blind spot warning and cross traffic alerts, panoramic roof and Intelligent Cruise Control with Forward Collision Warning and Forward Emergency Braking.
The SR is the sportiest with all features found in the SL plus beefed up suspension, 19-inch wheels and Bose 11-speaker surround sound system. 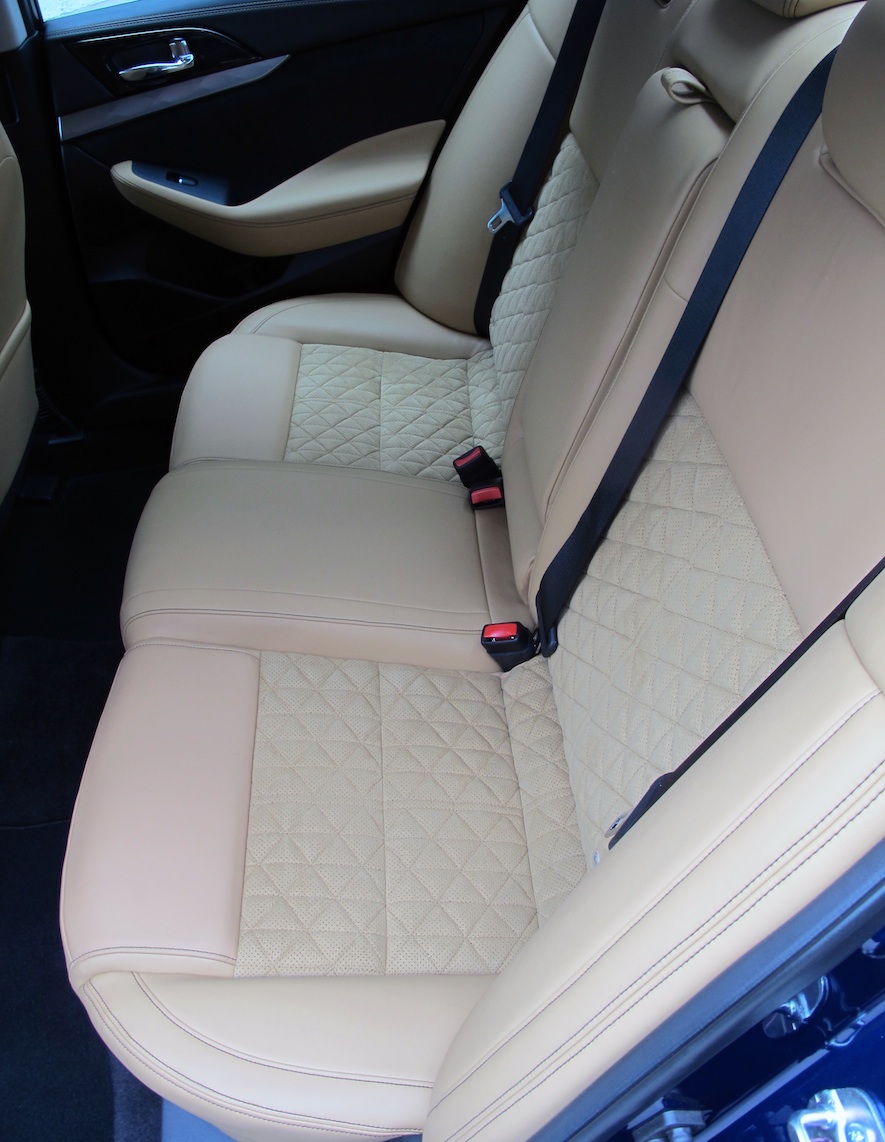 The exterior breaks away from any Maxima that has gone before with now signature “boomerang” lights front and rear, wraparound windshield and a thin blackout on the C-pillar that gives the impression of a floating roof.

But the most dramatic element of the 2016 Nissan Maxima is the interior that was heavily influenced by frontline fighter jet cockpits. Nissan calls it the Maxima’s command centre. 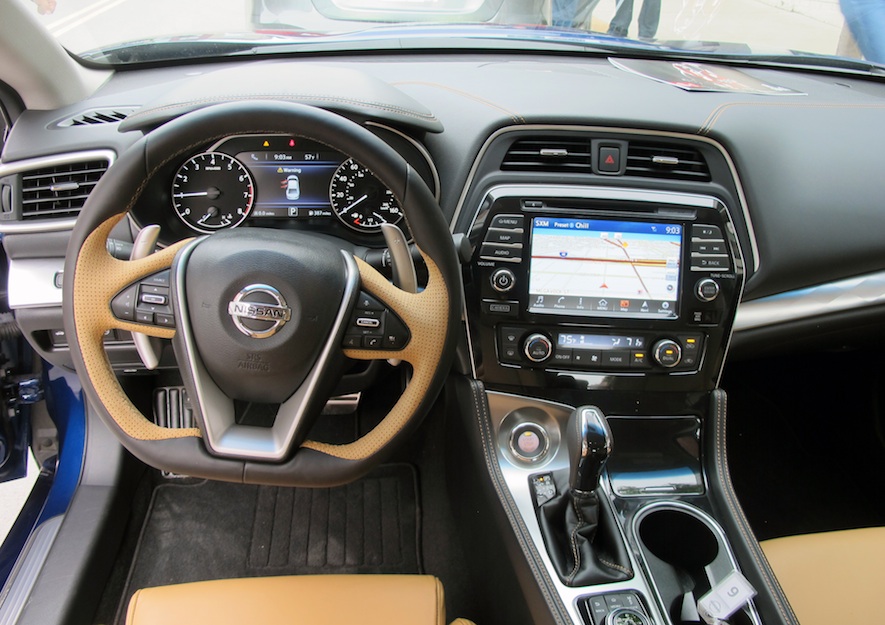 With the centre stack angled toward the driver with its eight-inch touchscreen and seven-inch main instrument cluster monitor, the driver has no less than 15 inches of combined viewing with only 10 switches compared to 25 beforehand.

Like a smartphone or tablet, the centre touchscreen has pinch and swipe features that allows the driver to take info and swipe across to the driver information screen with a simple gesture – amazing! 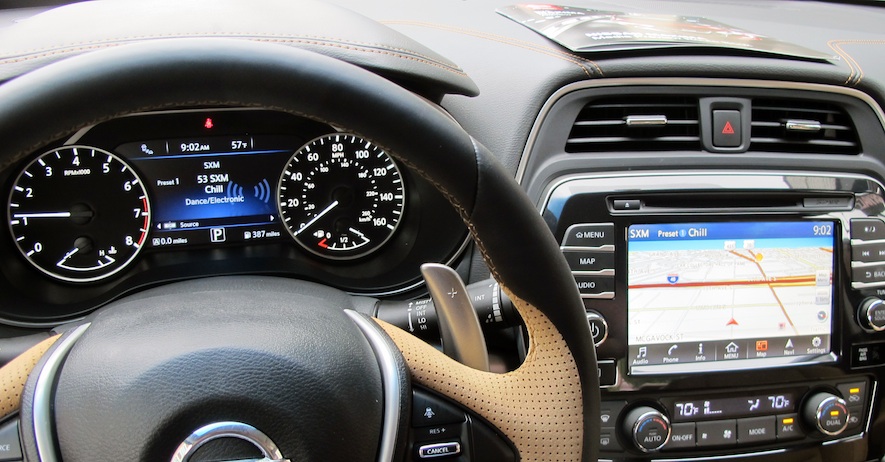 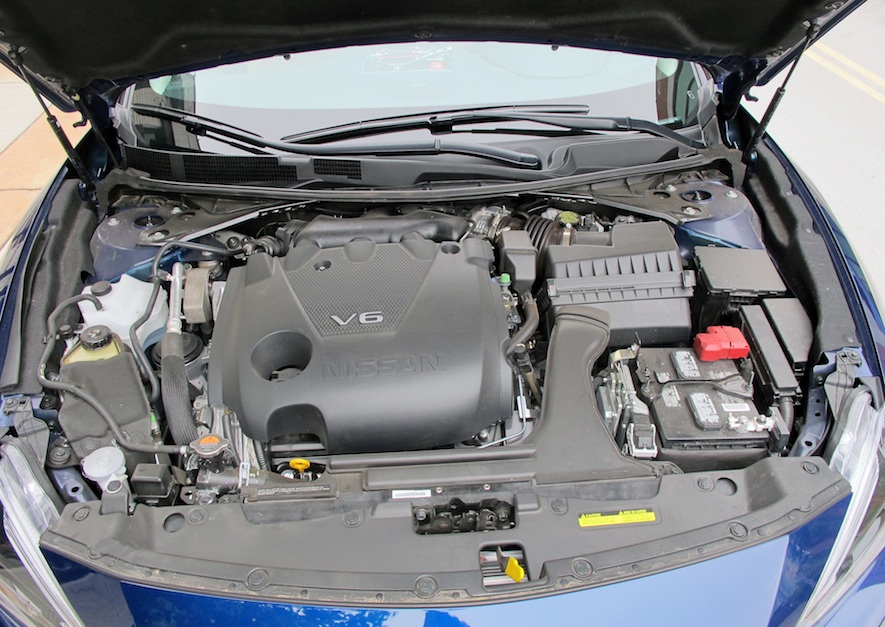 The unibody platform rigidity is up 25 per cent, thanks to much more high strength steel.

With the claimed highest power-to-weight ratio in the mid-size class, I couldn’t wait to make the most of that in the hill country roads around Nashville where the press launch of the 2016 Maxima was held.

Getting into SR model, I drove, you are greeted by a stylish, flat-bottom steering wheel with Alcantara inserts in perforated beige.

The centre console placed HMI (human machine interface) has a nicely knurled rim like a Rolex watch. The trim has an intriguing “diamond cut” face matching the form of the quilted seat inserts.

Put your foot down and all Maxima’s 300 horses surge the car ahead without tire squeal, and more importantly, no torque steer.

With the SR’s bigger 19-inch wheels and beefed up suspension, the Maxima took everything I could throw at it without drama, tracking straight and true along more than a 100 miles of well kept, but challenging, roads. 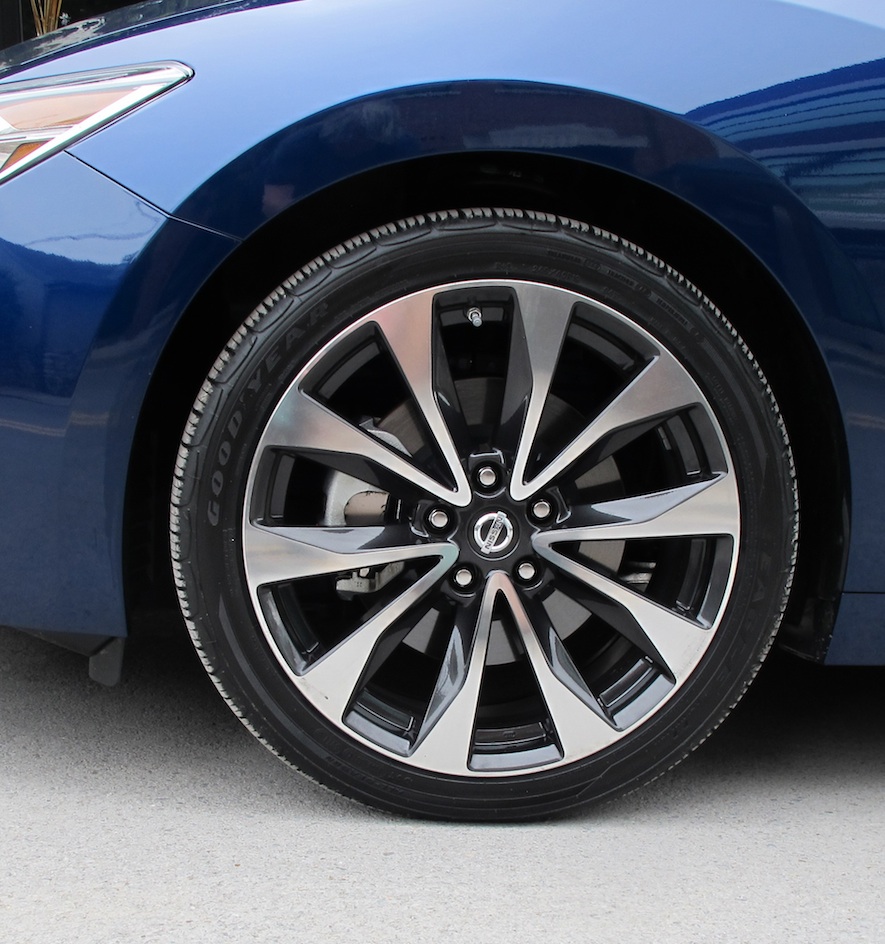 But my overall impression is how good the new Maxima would be on a drive across the continent.

Yes, the Four-door Sportscar is back.