The 2016 Mazda CX-5 compact CUV benefits from the brand’s KODO styling language. This is the topline GT with 19-inch alloy wheels.

What’s Worst: Growly engine at start up and infotainment system that requires too much scrolling up and down and back and forth while driving.

What’s Interesting: Hooray for Mazda fitting a full-size spare under the cargo floor instead of a dinky bolted to the underside or an inflator kit and no spare at all.

Mazda was one of very first to come up with a compact CUV, the Tribute, which was introduced in 2000 as a 2001 model and also sold as the Ford Escape.

Here’s an interesting bit of Trivia. The Tribute was the first Mazda to use the Zoom-Zoom song in TV advertising.

The Tribute was a tough little truck that was simple in execution and a chinch to maintain. My neighbour has a first generation version that still runs in perfect order and does most of the maintenance himself.

But as we all know the compact CUV segment has morphed mightily in the past 15 years, with people wanting more content, more style and, of course, better fuel economy — all of which sum up the 2016 Mazda CX-5.

Mazda has adopted its Skyactiv design philosophy which combines a suite of technologies designed to lower weight and improve fuel saving at the core of which are its Skyactiv engines and light weight drivetrains.

Mazda is run for the most part by engineers and they concluded that they could achieve hybrid-like efficiency without the complexity and mass of electric motors and large battery packs.

Cutting engine integral friction and weight, while radically changed the ignition process has resulted in fuel numbers that do approach that of hybrids.

There are two Skyactiv engines on the CX-5. The base GX has a direct injection 2.0-litre inline four-cylinder producing 165 hp and 150 lb/ft of torque with standard front-wheel-drive and all-wheel-drive optional. A six-speed manual transmission is standard on the base model with a six-speed automatic with selectable manual shift mode and option. 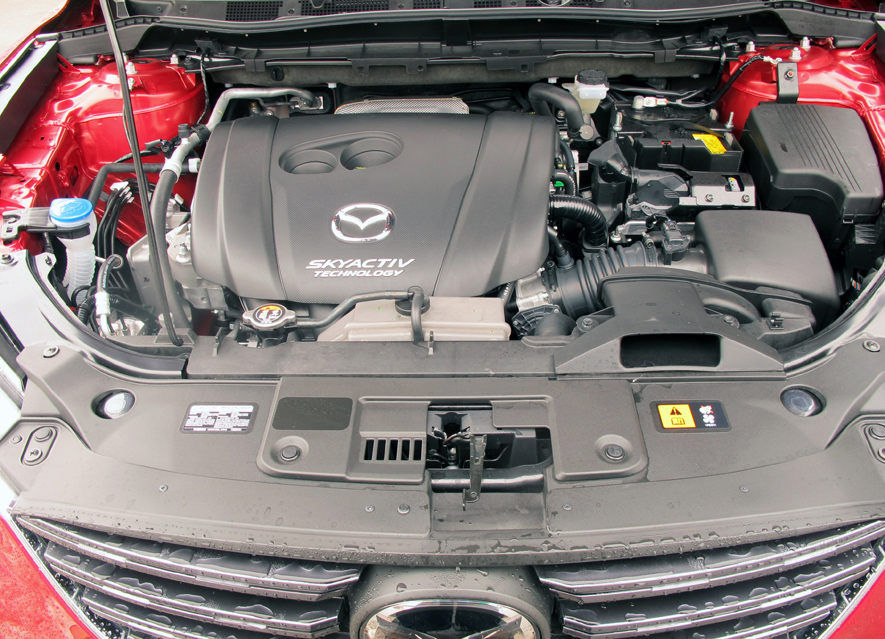 The 2.5-litre direct injection four-cylinder is found on the mid-level GS and topline GT with the automatic standard on both. The GS comes standard in FWD with AWD an option, while AWD is standard on the GT.

One thing I really like is a full-size spare tire and, as a bonus, it is under the cargo floor not slung under the body. 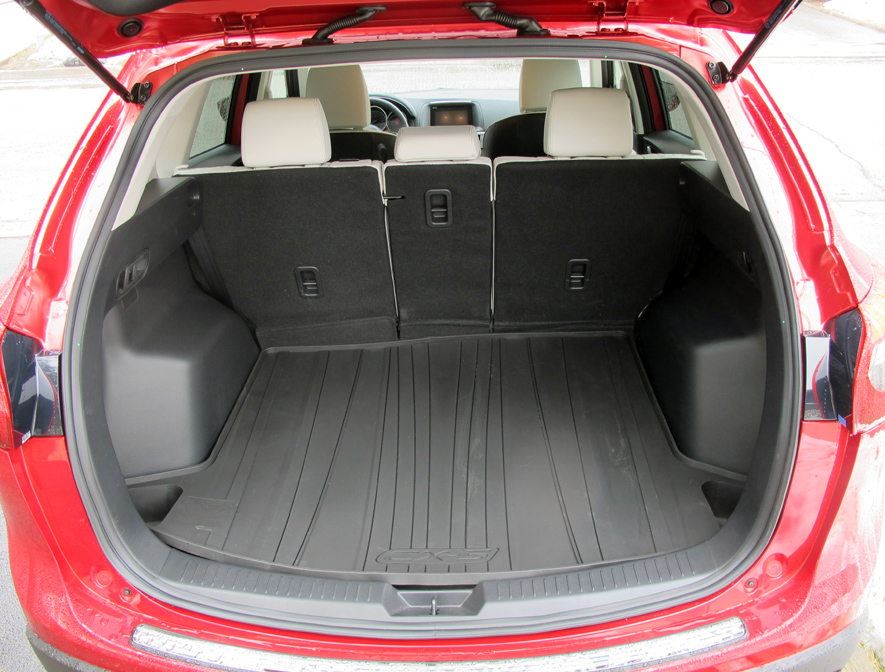 When you start up, the 2.5-litre is very gruff sounding, almost like a diesel. There’s nothing wrong. It’s just the nature of the engine and the sound fades away when it comes up to the correct running temperature.

The CX-5 tested here is the top trim GT model with every standard and optional feature in the Mazda parts bins.

Heavily equipped does not mean it feels heavy, in fact it’s one of the best handling compact CUVs I’ve driven recently and with all-wheel-drive to boot.

All Mazdas have what they call the “soul of a sportscar” as part of the ride and handling, which makes driving it, in my opinion, more fun.

In addition to my week with the CX-5, I was a passenger in another 2016 with a colleague going up to see an old pal in Collingwood.

With the rolling hills and the snow just starting to recede, it was a very enjoyable ride, thanks in no small part to the compliant suspension even with snow tires fitted.

Performance is adequate for just about every situation you’ll encounter. But if not, there is a “Sport” button on the automatic that’s new for 2016.

Basically it drops a gear for more power and delays the upshift. But it does add a lot of engine noise and it seems to take a long time to upshift. Personally, I would probably never use it.

Styling is very sharp and uses the KODO design language that, thankfully, got rid of the “Joker” grille treatment and way too many body side character lines.

The grille on the CX-5 has a five-point form with five, thin horizontal cross bars. This leads to a sweep up and over the front wheels that glides back to the rear. Thick wheel well liners give it a rugged look, but also go a long way to quelling a long-time Mazda weakness, wheel arch rusting.

Besides styling, the demand for increased content seems to grow on a yearly basis and the CX-5 does not disappoint. 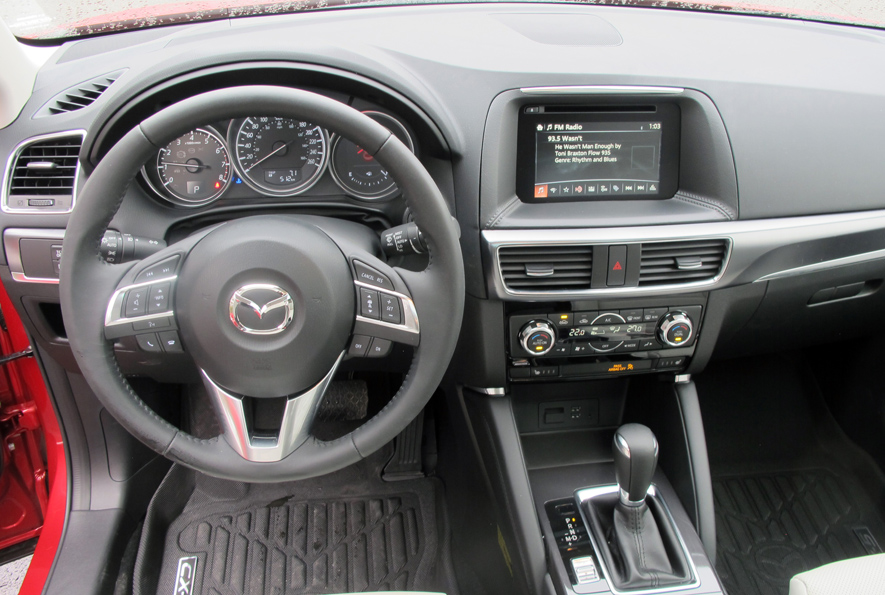 A $300 option, and well worth it, was the Soul Red Mica paint which just about everyone commented on.

As the CUV segment continues to stratify in more and more sub-segments (Mazda is bringing out the smaller CX-3 shortly) the number of compact CUVs coming to market shows no signs of slowing.

But with KODO styling, soul of a sportscar performance and Skyactiv efficiency, the 2016 Mazda CX-5 hits all the compact CUV sweet spots. 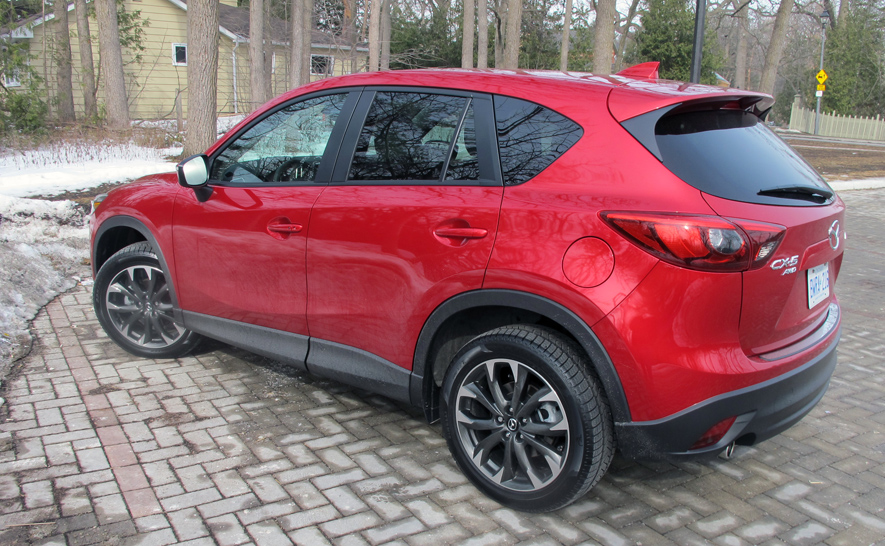 Related: Production Of The All-New Mazda MX 5 Has Begun