The Germans do fast sedans well, but the GS F proves that Lexus has what it takes, too

In addition to all the fun stuff we’re going to talk about during this review, you have to respect Lexus and the GS F for having the stones to even dip a toe in the mid-size performance sedan category. 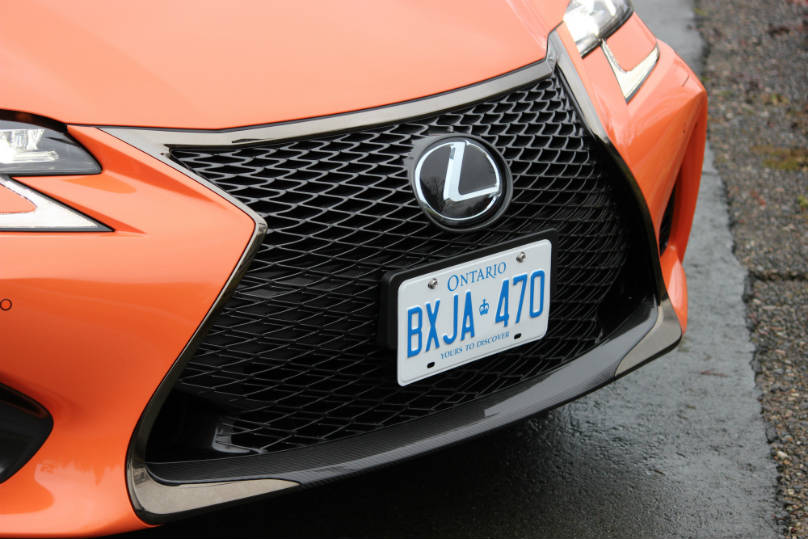 It is one that has been dominated – DOMINATED – by the Germans for as long as I can remember; heck, unless you count the Lotus Carlton of yesteryear, Mercedes, BMW and Audi pretty much started the whole performance sedan category – four doors, big engine – all of their own volition. Indeed, the GS F’s  BMW M5 competitor got its start way back in 1986, when BMW had a bunch of engines laying around that were supposed to be used for the M1 supercar. Instead, they shoehorned them into the engine bay of the 5 Series sedan.

Thing is, Lexus has been a fast study in the sports car and sports saloon game, leaving its Japanese competition in the dust thanks to the same stuff that makes the German entries into the class so great; big engines and big power. 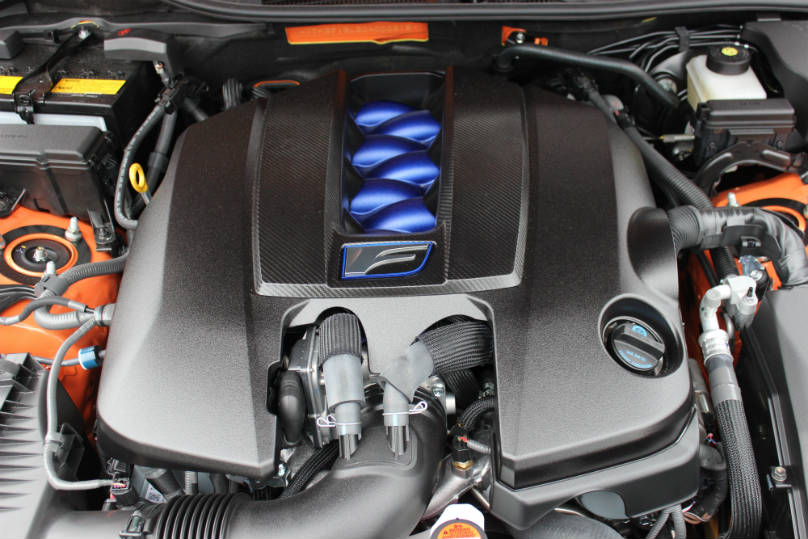 Upon first glance, though, the GS F is appealing because the super saloon buyer often falls into one of two camps: flashy, or Q car. For the latter, it’s all about badge deletion and muted colours. For the former, however, it’s all about being seen, which means lots of bright colour, and lots of noise.

It’s a naturally-aspirated V8, so the power hit comes quick, quick, quick: peak torque arrives at 4,800 rpm, but you have to keep hoofing it to get to peak hp

As you can see, my tester has the colour thing all sewn up; it doesn’t get much more retina-searing than my car’s Solar Flare orange (see? It even gets a bright name!), which my wife compared to the tint used by many cabs in my hometown of Vancouver, BC. And you know what? She’s right. However; you also must know, then, that this is exactly what Lexus intended in the first place. It’s a head-turner like few sedans (or even sports coupes) I’ve ever driven. I had the fortunate chance to park beside an M5 at one point and let me tell you; the Bimmer doesn’t stand a chance, sitting there melting in the glare of my Solar Flare. 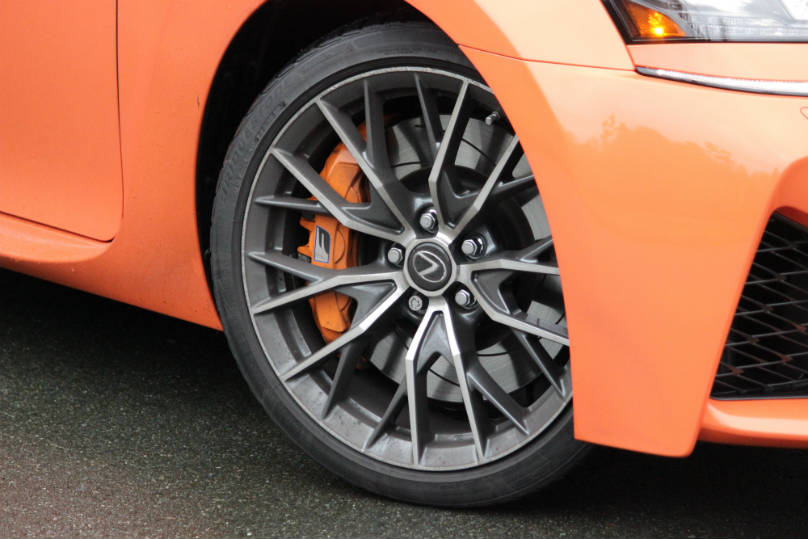 Still, I guess there’s something to be said for the “lesser” colour options – Ultra White, Caviar and Atomic Silver, to name a few – because Lexus isn’t really known for their flash. There’s just something about a grey Lexus – of which there are about a billion in the world today — that can go toe-to-toe with an M5 off the line. It could very well be the ultimate sleeper car, when you think about it.

Still, no amount of colour neutrality can hide the front and rear bumper extensions, flared fenders, black mirror caps and carbon-fibre trunklid spoiler. These are all elements that help to reinforce the fact that this model is a pretty far cry from the GS 350 it starts life as, as well as that car’s “F Sport” variant. Indeed, the GS F is a big, big step up performance-wise from that car, and I reckon it would feel a mite slighted if you ever mixed it up with its lesser-endowed stablemate.

It’s not all on the skin, either; I experienced one of the neater surprises of the year when I popped the hood of my tester. Like that which is seen in so many other offerings from luxury brands today, I expected the GS F’s engine bay to be one big plastic cover. Even though I had previously experienced the GS F’s two-door RC F cousin – which gets parts of its engine bay painted a sparkly blue, for the whole world to see – I still had my doubts. They turned out to be unfounded, however; the GS F? Same blue paint, same inviting window to the power made within the big 5.0-litre, naturally-aspirated V8 block.

Of course, as fun as it is to enjoy your car as you’re walking towards (or away from) it, you can’t see it once sat inside, so you want that to feel special, too. 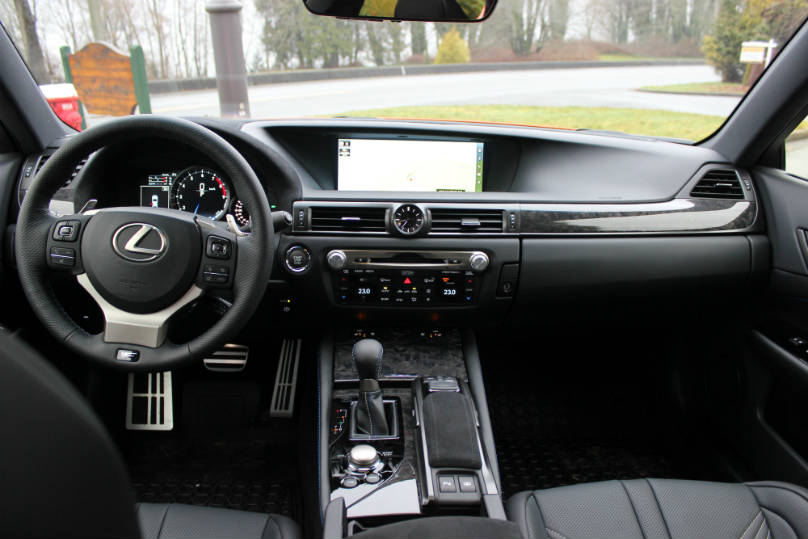 “No problem,” says Lexus. Contrasting stitching, Alcantara suede dash upper and headliner, and carbon-fibre accents leave little doubt you’re in something special when sat in the GS F. The very comfortable and supportive F-specific sports seats are icing on the cake, and I encountered no discomfort over long distances. Even the side bolsters are easy to clamber over; yes, those that like their side bolsters so tall you need a forklift to get out may be disappointed, but there’s still plenty of support even for slimmer hips. 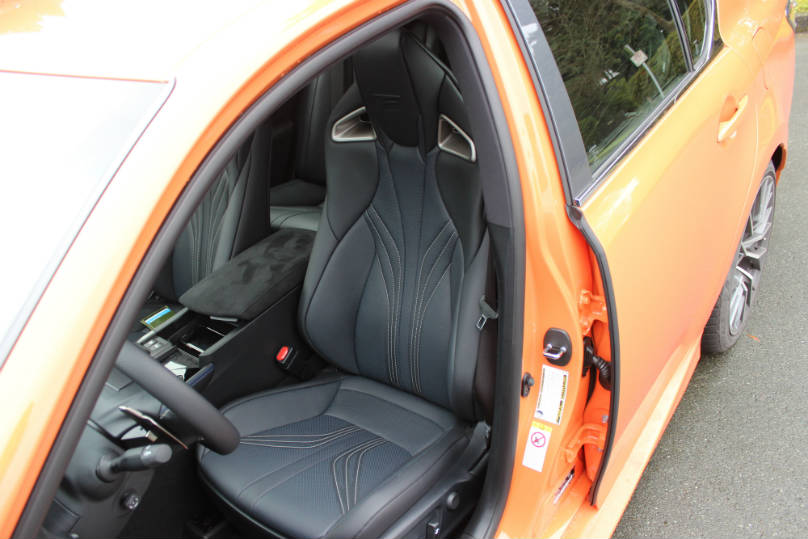 The rest is pretty standard Lexus fare, including the infotainment system. Which, as always with Toyota’s luxury brand, is a bit of a mixed bag.

There are a few versions; luckily, the touchpad found in some models is replaced, here, with a joystick thingy and it’s a step up. Basically, it acts as a mouse and there’s a cursor, of sorts, displayed on the infotainment display. The cursor is tuned to “snap” to the nearest button, which would be fine if it were foolproof. Unfortunately, all too often, I found the cursor to snap to the wrong spot, forcing me to start all over again. Some lesser Lexus models – the CT 200h, for example – use a more traditional scroll wheel. I’d prefer that. 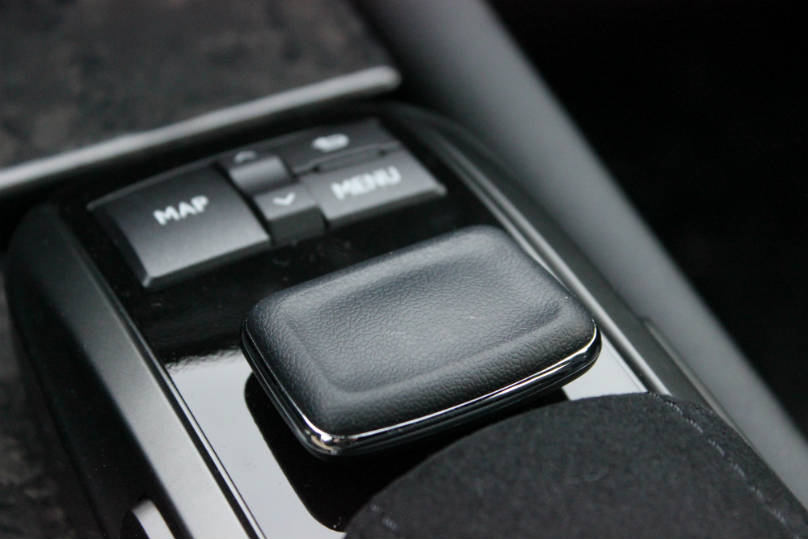 The system is a mixed bag, though, because many other parts work rather well; the 17-speaker Mark Levinson sound system, for example, is very good, and does well to keep up with the rumbling engine ahead, and twin-outlet exhaust behind.

That’s no small task, considering just how noisy the GS F is. And we’re beyond talking about the “noisiness” of the colours; we’re talking the deep, angry, bellowing report from the engine and exhaust that gets electronically boosted as you go deeper into the throttle. Let’s just say that if you told me that Lexus – a company whose old ads featured a pyramid of fine glassware balanced on the hood of a running car – would one day make something as feral, I would have had quite the laugh.

All kidding aside, though: this GS F is one serious performance machine. It stands to reason; the “F” in “GS F” stands for “Fuji”, as in Japan’s Fuji Speedway, where Lexus has a development facility, and where this, the RC F and plenty of other fast Lexuses (Lexi?) have laid more than a few rubber strips.

It’s a naturally-aspirated V8, so the power hit comes quick, quick, quick: peak torque arrives at 4,800 rpm, but you have to keep hoofing it to get to peak hp, which comes some 2,300 rotations later. Rest assured, though, that it will be manic the whole time; I actually found it felt quicker than the RC F I sampled. If I’m honest, though, I’ll admit to a bit of a bias because as a two-door coupe, I probably had higher hopes for the RC in the first place.

At any rate, when coupled with the 8-speed automatic (with paddle shifters), forward progress is quick and an assault to the senses, which is kind of what you want from a super sedan like this. In S or S+ mode (selectable via a console-mounted wheel), shifts are carried off lickety-split, with throttle sensitivity dialed up to 11 so that feathering the “go” pedal will have you forced into the seatback pretty aggressively. 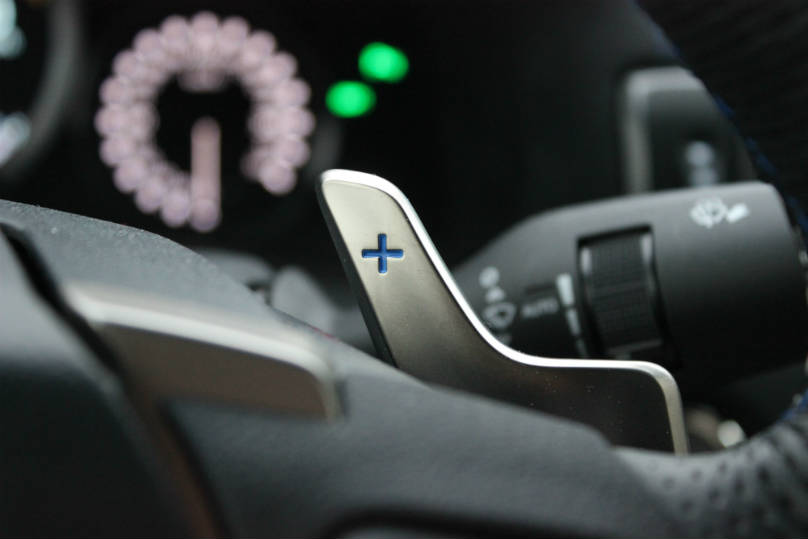 There’s an Eco mode, too. But would you ever use it? It makes you feel like you’re driving in molasses, which, of course, is a feeling that’s redoubled considering how peppy it is in either of the two “S” modes, and even in normal mode. There’s a snow mode button, too, but that may be the least-pressed button in the automotive industry today.

Much more appropriate to the GS F experience is the “Torque Vectoring Differential (TVD)” button, which modifies the torque vectoring system. You can set it to Standard, Slalom and Track, each setting modifying how power is dispersed between the rear wheels. Slalom, for example, is tuned to provide quicker turn-in for left-right transitions, while Track is meant for stability at higher speeds. Best to keep the car in Slalom, as chances are any kind of slightly-more-aggressive driving you’re going to do is going to be on tighter, winding backroads, where the Slalom setting works really well. TVD is independent of the drive mode settings, so while the experience is not quite as robust as the M5’s M-buttons, most drivers should find a setting that suits them. 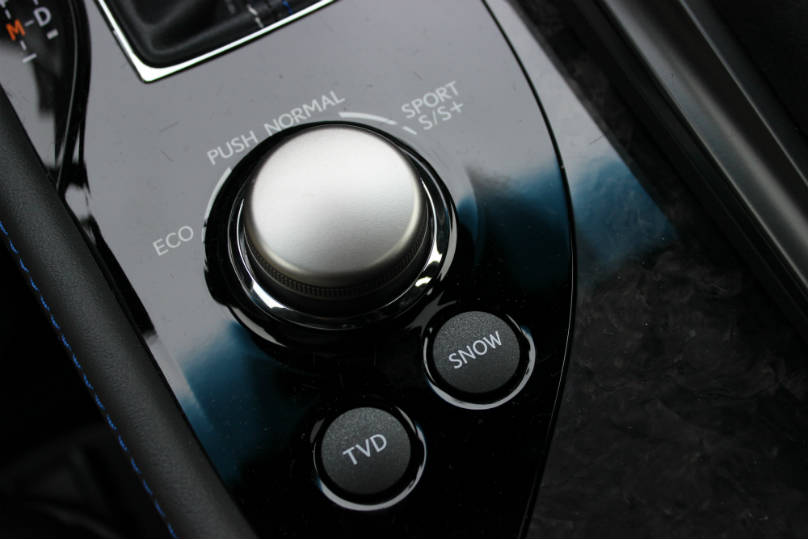 Yes; the power is big but at 1,830 kilos, I wouldn’t exactly call the GS F “svelte” and the combination leads to some pretty lairy fuel economy figures (we saw 14.4L/100 km), but then, we made very little use of Eco mode and it changes the drivetrain quite drastically to save at the pump. Not to mention that it uses a version of the Atkinson Cycle used by Toyota’s hybrids to help reduce fuel usage at lighter loads.

Thing is, big fuel usage doesn’t hurt quite as much when you realize that with pricing that starts below $100 grand, the GS F is a bargain when compared to most of its competition; the less-powerful S6 is the only real competition that starts at less than does the GS F. Both the Mercedes and BMW entrants start north of $100K. Plus, with the Lexus, you’ve got the peace of mind that comes with parent company Toyota’s engineering quality.

Not to mention a healthy portion of driving fun. 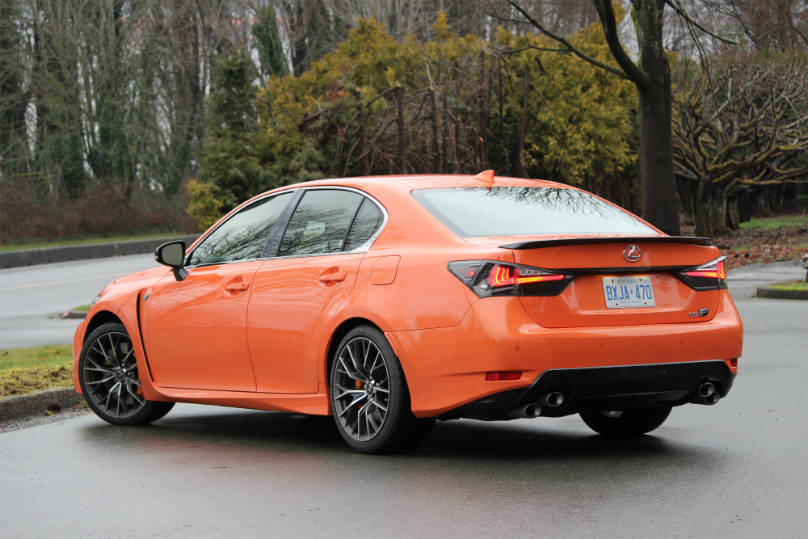