It may look different, but the 2016 Lexus ES 350 remains as capable a midsize luxury sedan as you’ll find on the market today.

Like the Dodge Challenger I recently tested, I have to respect the 2016 Lexus ES 350 for the fact that it is so very good at doing what it’s meant to do.

It’s not particularly exciting on the dynamic front; it’s not like so many other new Lexi in that it doesn’t scorch your retinas with bodywork slashes left, right and centre. It’s smooth, if not overly powerful to have you torque-steering your way into the fire hydrant as you do your best to pull into evening rush hour traffic.

That’s OK, though, because if you ask me which car I’d rather be using to undertake such a task, it sure as heck wouldn’t be the Dodge Challenger. Not a chance. Plus, the ES did receive a styling update for 2016, adding a slightly more serious version of Lexus’ controversial hourglass-shaped “spindle” grille, new headlights, boomerang-like LED running lights and new wheels. I think it looks rather good; in fact, some of Lexus’ more garishly-styled models (I’m looking at you, NX and RC) could take a few notes from the ES. Never thought I’d be saying that of Lexus’ bread-and-butter vehicle. 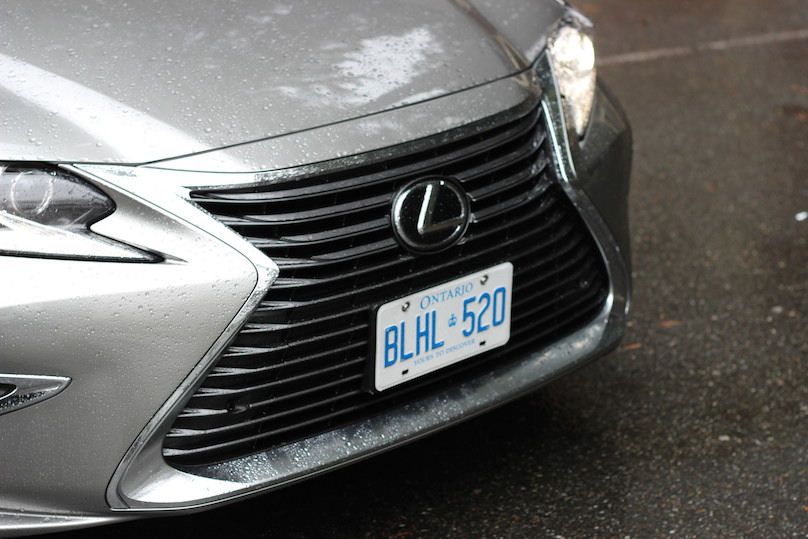 The ES was all-new for 2013, the biggest addition being the switch from being based on the Toyota Camry, to being more closely related to the larger Toyota Avalon (all three vehicles use a derivation of the same platform). That means a longer wheelbase, and more room inside.

Rear passengers get 953 millimetres of headroom (938 mm with the moonroof, as fitted to our car) and 1,015 mm of legroom, while front passengers get 953.4 mm and 957 mm with the moonroof; the back seat is where you’ll really feel the difference, as the front seat feels a little low on headroom, especially for taller drivers like myself. I found my sightline was perilously close to the top of the windshield. The seats are plush yet supportive, the steering wheel and shift lever fall easily into your hands and you won’t have any problem loading four passengers and their goods, thanks to the ES’s 430-litre trunk capacity. 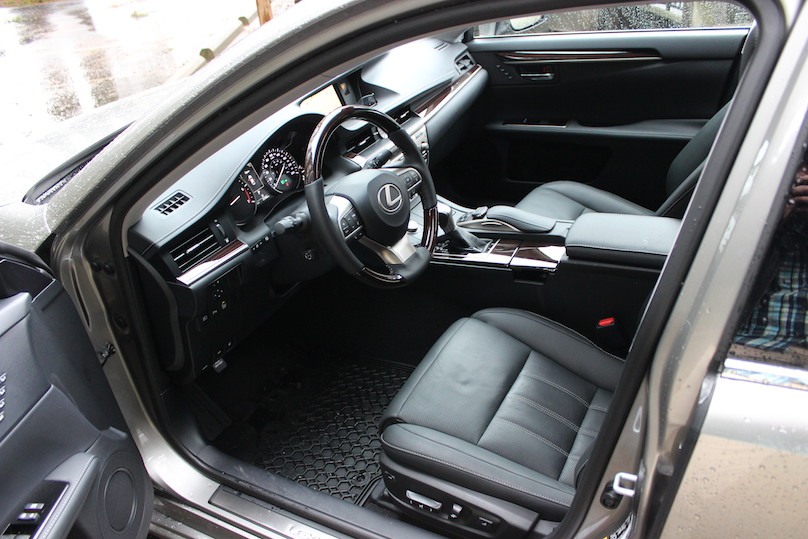 This being a Lexus, there’s plenty of tech on-hand, too. How you access it, however, is likely going to divide opinion.

While the ES does away with the touchpad interface as seen elsewhere in the line-up, the joystick it uses is still a little clunky to operate. Technically, there’s a cursor on the infotainment screen that can be manipulated by said joystick, but it’s tuned to snap from button to button, often snapping to the wrong one. I like it more than the touchpad, but it’s not perfect. I’d take competitor Acura’s controller any day of the week; I always found myself wishing that the ES’s drive-mode selector wheel was actually used to navigate the infotainment interface.

The Lexus does beat said competition on the graphical front, however; the fonts are clear and crisp, the colours nice and bright and the automatic album-art that displays when you’re running Bluetooth audio or Sattelite radio is a nice touch. Better still, you get proper dials knobs for your volume, tuning and climate adjustment, while others are going to a touch-only interface. 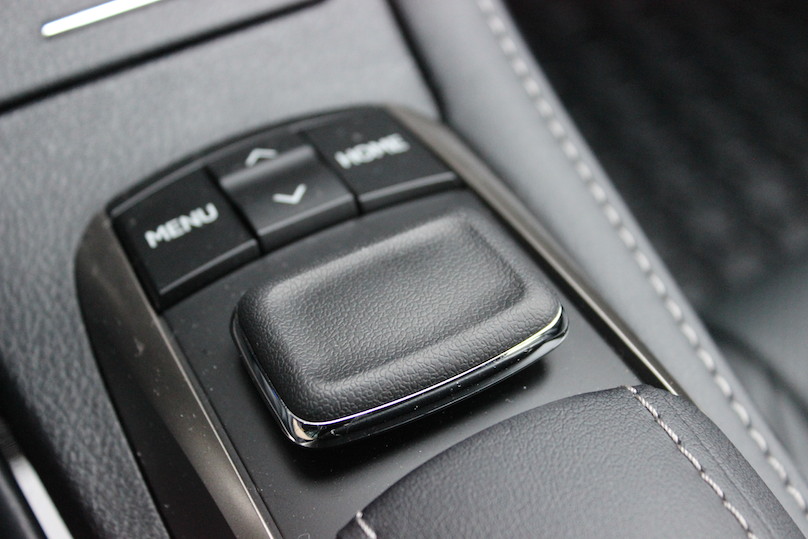 I just wish that the cockpit in general were a little brighter; our car had some white contrasting stitching, but it does little to offset the dark dash and door panels. While they look good from the outside, the narrow window openings don’t help the situation. My advice? Choose one of the brighter interior colour options.

On the safety tech front, my tester’s Executive Package means the addition of all sorts of safety tech: it provides active lane-keeping assist, rear cross-traffic alert, pre-collision warning system, dynamic radar cruise control, backup camera and automatic high-beam reduction. Lane keep assist is especially well-implemented, not directing the car back on-line too forcefully; often, systems like this have the car bouncing back and forth from side to side within the lane.

There are two ES models for 2016—the ES 350 and its Hybrid twin, the 300h. Being the former, my tester was powered by a silky smooth V6, good for 268 horsepower and 248 lb.-ft. of torque, both figures that are down a little on the competition from the likes of the Infiniti Q50 or BMW 535i. I guess that’s too bad, but the way the ES goes about its business plays into what we talked about earlier; it doesn’t need to be able to blast up a b-road at a million miles an hour. What it needs to do is get its occupants to the restaurant smoothly, quietly and comfortably. Plus, if you want a little more performance from your luxury sedan, there’s always the ES’ GS Series cousin. Or the smaller IS, for that matter.

Power is fed through a smooth-shifting six-speed electronic transmission, as the non-hybrid model managed to escape the continuously-variable automatic (CVT) doldrums bestowed upon the ES300h. There are no paddle shifters, but there is a manual mode that’s actually surprisingly responsive if you want to add a little more flare to your drive, or if you’re driving in adverse conditions. 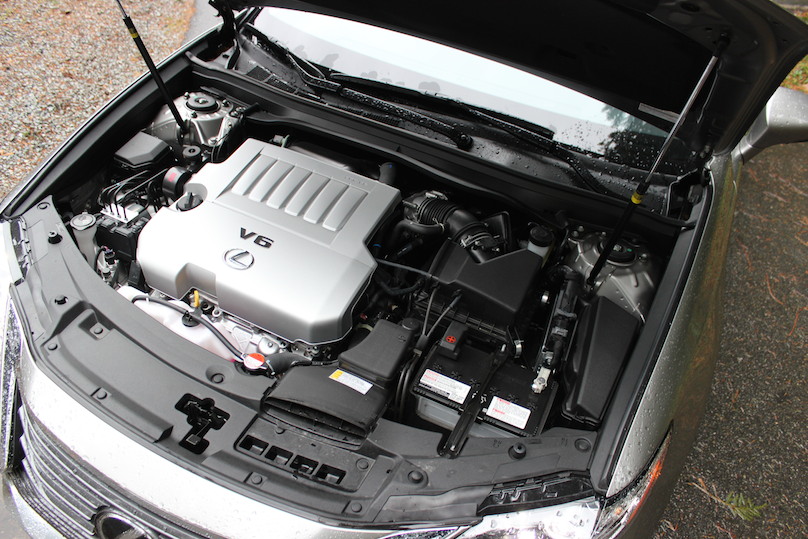 Three drive modes—all selectable from that console-mounted control wheel—are on-hand; ECO, Normal and Sport. Sport makes some reasonable returns, but we kept it in Normal or ECO for most of our time in the car. That way, we still had that great ride, while at the same time only using 12.6L/100 km in the city. Better still is the way throttle response isn’t deadened as much in the most fuel-efficient mode as it is in other cars.

Peak power comes at 6,200 r.p.m., but you’d never know the engine was working that hard because the thing’s so darn quiet. Indeed, more attention was paid to sound deadening for 2016, and it’s paid off; there’s very little wind noise (the ES’ slippery shape returns a drag coefficient of just 0.27) and the engine will growl a little under full throttle but doesn’t drone on when on the highway. The only real noise is from the tires, probably made a little worse by our tester’s chunky winter rubber.

Change the interior colours, get some all-season rubber on there, and the Lexus ES 350 will strut its stuff as the well-equipped, well-mannered and altogether luxurious car that it is. The ES was one of two models that help debut the brand all the way back in ’89; obviously, the manufacturer has learned a few things over the years, and the 2016 ES 350 is all the better for it. 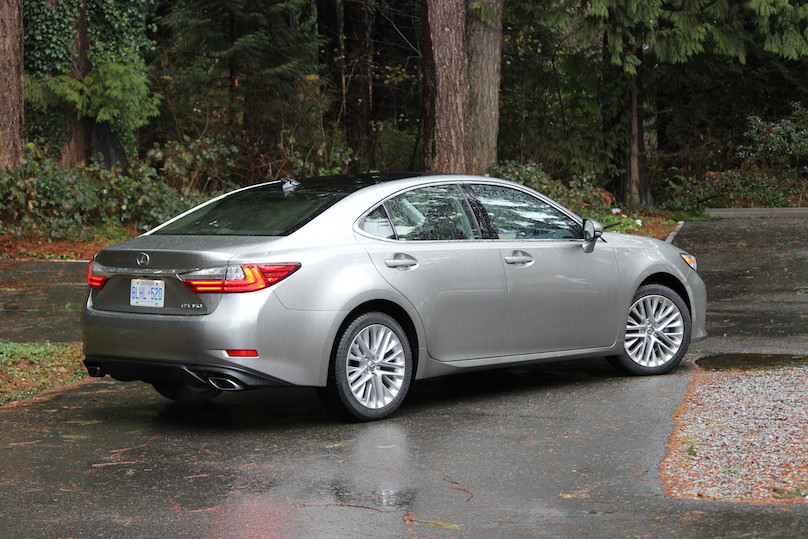