For the first time in quite a while, the BMW 550 and Mercedes-Benz E400 may be spending a little more time looking over their shoulder on the autobahns and b-roads of the world.

FOR the first time in quite a while, the BMW 550 and Mercedes-Benz E400 may be spending a little more time looking over their shoulder on the autobahns and b-roads of the world.

2016 sees the arrival of not one, but two new versions of mid-size luxury sports sedans from the Bimmer and Benz’s competition.

Cadillac and Jaguar have both come to the table with fast-saloons of their own with the CTS V-Sport and the ride you see here, the Jaguar XF S. They join Lexus, which jumped in the ring with the all-new GS 350 F Sport las year.

Allow us to get one thing out of the way first: unlike most of the competition listed here, the XF gets the benefit of a supercharged V6 (turbochargers pull forced-induction duty on all the others, save for the naturally-aspirated Lexus), similar to what’s found in certain trims of Jaguar’s very impressive F-Type sports car. That means the XF S’ powerplant is strong, it’s well-tuned and, because it’s a Jaaaag, it sounds incredible, too.

Which means more than you might think, if you consider the way Jag’s gone about its performance car business as of late.

I was one of the few lucky journos that had the chance to attend the mini-launch of the upcoming 2017 Jaguar F-Type SVR, which happened to occur in the middle of Manhattan. In fact, it happened to occur in a cordoned off tunnel – the Park Avenue Tunnel, if you’re asking – in the middle of Manhattan. Why, you ask? Simply because it was in a tunnel like that, that we could experience the full aural delight that is the SVR. Think about it: a whole tunnel cordoned off, just so we could give a new roadster the full beans and hear what it had to say while we were at it. The exhaust report was a huge part of the car’s attitude, and when you’re buying flash metal like this, well, that kind of stuff matters.

Now, the XF S isn’t quite so feral, but the sound through the two potato canons Jag calls tailpipes is worth a listen; kind of an off-beat warble with a twist of metallic whine that does a pretty good job of recalling classic Jag sixes, like something from an XKE.

Granted, being supercharged, it’s a little more muted than it may be if naturally aspirated, but it’s hard to fault Jag for that considering that of all the cars we mentioned earlier, the majority use some form of forced-induction. 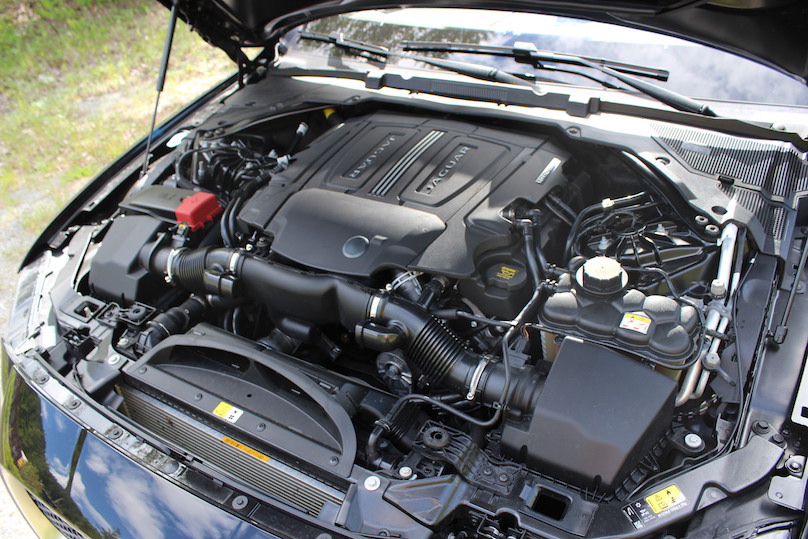 What it does do for the Jag, however, is help provide 380 hp and 332 lb-ft of torque, fed to all four wheels through Jag’s well-sorted 8-speed automatic transmission (that can be shifted via a pair of wheel-mounted paddles as standard). That means that jump off the line is quick, to the tune of a claimed 5.3 second 0-100 km/h time. Ours wasn’t an instrumented test so we couldn’t test this, but when you think about it, not many owners are going to be rigging black boxes to their Jaaaags either.

What matters, then, is how the XF S feels when you give it the beans. And it feels great, especially if you’ve selected Dynamic Mode with the press of a console-mounted button. That sharpens throttle and transmission response as well as sharpens the dampers. Even if you decide to do the shifting yourself, the gearshift times are quickened, so you get a very sports car-like response.

At 1,760 kg the XF S is 48 kilos lighter than the next lightest of the cars mentioned earlier, the CTS. The XF S is a full 431 kilos lighter, meanwhile, than the group heavyweight, the GS.

The lighter engine helps, yes, but so does the extensive use of aluminum in the body. Not only does the material save weight, it also adds stiffness so you get better handling, a more controlled ride and less noise as speeds grow higher, or turns grow sharper. Oh, and for you sustainability types: much of the aluminum used is recycled, which Jaguar claims uses 95 per cent less energy to produce.

That’s the “feel good” stuff; as far as the “bad ass” stuff goes, the XF S was game for almost everything we threw at it. It was the perfect partner to cruise with towards one of our favorite driving roads; the black and red seats may seem garish, but they are comfortable when you need them to be, and as we’d soon find out, supportive, too. 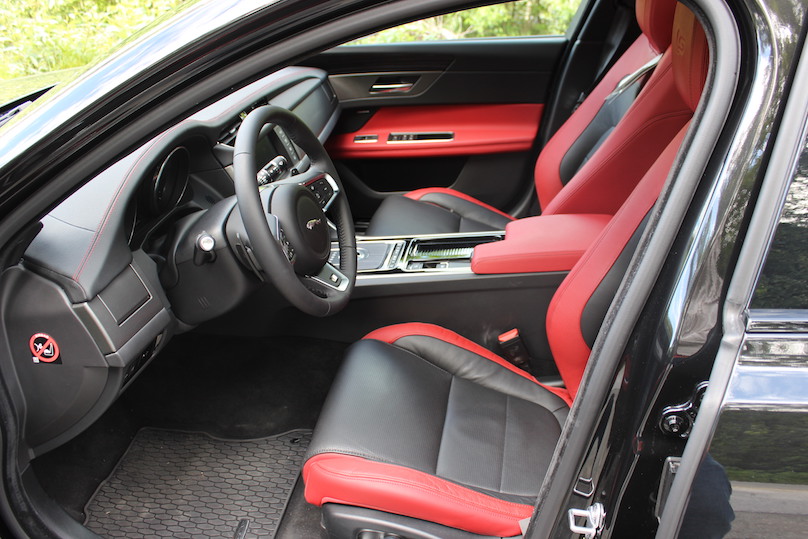 It’s also in times like these were you begin to explore a car’s infotainment interface, and the XF S’ is all-new. It’s a good thing; the old system was way behind the competition when it came to appearance, ease-of-use and responsiveness. The new one is much better; buttons are responsive, the graphics have gotten a major overhaul and it’s more user-friendly overall. Ours was the base 8-inch version, but you can upgrade to a 10.2 in. widescreen interface if you really want the full-bore “pro” experience. You can opt for a heads-up display reflected off the windshield, too, as well as a digital gauge cluster.

It’s paired with a fantastic Meridian 11-speaker unit that is crisp, clear and able to rattle your ribcage if you let it. Jaguar knows that while it continues to up the performance ante, its luxury credentials need to keep pace, too.

The one issue I’d take with the interior is how around some creases and bends on the seats, it’s almost as if they didn’t quite pull the leather tight enough, resulting in some fairly unsightly wrinkles that look like something you’d see on something older than our 3,500 km tester. You’ll also want to keep the rear seat reserved for shorter folk; they are snug, both in the leg and headroom departments.

You gotta love the finer details, though, such as the aluminum bezel around the gear select dial, and the way the dash vents only reveal themselves once the fans are activated.

None of that matters, though, once you start to dip into the Jag’s deep power and performance reserves.

Upon arrival at the off- off Broadway piece of tarmac we use to test performance vehicles, it was time to activate Dynamic Mode and see what the XF S’ performance credentials were all about.

It’s a gnarly piece of business, this bundle of bends. There’s some broken tarmac here, a little off-camber dip there and a handful of blind curves that have you really wanting an adjustable steering rack, lest some oncoming traffic get a little generous with their lane placement.

The Jag, especially in Dynamic Mode, provides. It’s a – surprise! – electronic set-up, but one that’s been given a good amount of weight; it’s not quite as high on feel as the F-Type’s is, but that’s to be expected considering the segment in which the XF S competes. It’s also not overly-weighted like what you’ll find on some BMW products, so that’s a nice takeaway and feather in Jag’s cap.

In practice, the results are satisfyingly quick left-to-right transitions, with smaller adjustments sitting just before the instantaneous sports-car level. The dampers automatically self-adjust to what’s going on underneath, adding another weapon to the XF’s dynamic arsenal. If anything, I would say that the chassis almost feels a little too neutral, the clever AWD system keeping all four corners planted and requiring a real push to get unsettled. The sticky Pirelli Cinturato P7 tires, meanwhile, do their part to keep things copasetic; they are an all-season tire, though. It would be interesting to see just how much more glued to the tarmac the XF S would get shod with some performance summer rubber.

I would hope, however, that it wouldn’t be too much more, because as we explained before, the ability to engage in a little hooliganism is already pretty heavily reduced.

That is unless we’re talking about the rockin’ acceleration provided by the powertrain. We talked about its performance at launch, but it’s not hard to keep things on boil, especially if you make use of the paddles and sport mode – press down on the gear select wheel, spin all the way to the right – at which point everything gets sharpened even finer than it would be with just Dynamic Mode selected. Those settings will make you forget about any wrinkles in the leather, I can tell you that. No, you’ll be too busy feeling as the rear-biased AWD sends you spearing forward, fingers barely keeping up as you flick through the paddles, twin tailpipes singing as you clip another apex. 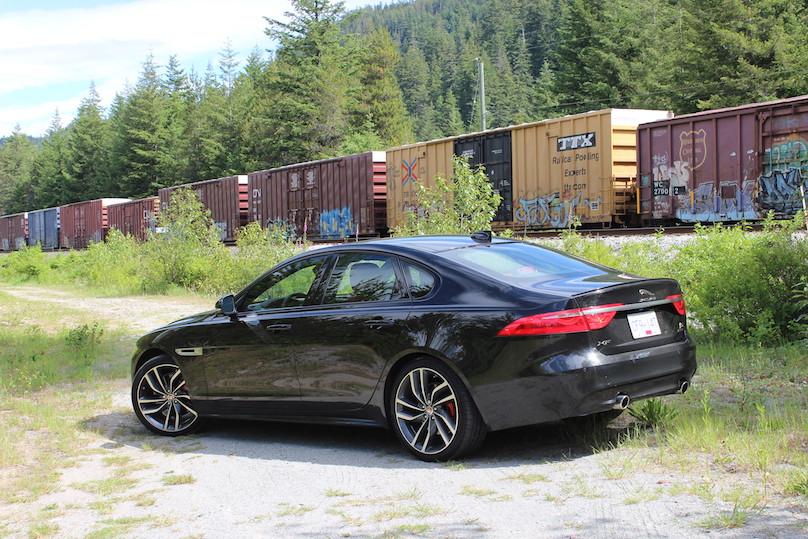 The larger-toed amongst us will want to be careful, however; the pedals sit close together to the point I found myself heel-and-toeing when I had no intention of doing so. I’m sure it’s great if you were spending time practicing your rally driver Scandinavian Flicks on a dusty or snowy road somewhere, but that’s not really what this car’s about.

It’s more about whisking you from point A to Z in comfort, with the ability to sojourn into points C, D, E etc. as you make your way forth, and not feel out of place at all when doing so.