2016 Honda Civic Sedan at a glance

Honda’s 2016 little Civic sedan has a big story to tell.

And that story is about a car that has grown up in many ways.

As an example, while it is sold as a compact sedan, the U.S. EPA considers it mid-size, based on the combined passenger (2,769 litres) and cargo (428 litres) volume. In fact, the 2016 Honda Civic has 2.1 inches more legroom than a BMW 5 Series. Honda claims best in class interior volume and I believe it.

Nearly 35 million Civics have been sold worldwide since it bowed in 1973 with a 1.2-litre engine. It has also been the best selling passenger car in Canada for 17 years, with more than 4.5 million of them produced in Honda’s Alliston production plant of which nearly 1.9 million have been sold in Canada alone.

The new Civic is also big news. As the global lead plant, Alliston not only launched Civic production around the world, but it is also responsible for developing the processes and tooling that will form the manufacturing base at all Honda plants.

The future of the new, 10th generation Civic gets even bigger, with the sedan being followed by a coupe, high-performance Si models, a five-door hatchback and the first-ever Civic Type-R model for the Canadian market.

And big was my first impression just walking up to it. Visually it looks about the same size as the last generation Accord, but the styling is much more daring.

While it is a four-door, the sweep back of the roof gives it a coupe-like persona, resulting in a very short rear deck and giving it a bob-tailed look, accented by the curved forward LED taillights.

From the front especially, the 2016 Honda Civic has a lower looking stance, thanks to the hood and roof being 40 mm and 20 mm lower respectively. At the same time, the front end is 30 mm shorter while the wheelbase is 30 mm greater, leading to the overall sense of greater size.

Inside, the love-it or hate-it two-tier dashboard is gone, replaced by a more contemporary main gauge cluster and centre stack. Premium and soft touch materials are used throughout.

Readers will note, not only do you get more power with the turbo, but better economy too. The power part my co-driver and I found out during an impromptu 0-100 km/h test where the turbo was two seconds faster.

More to the point, the 2.0-litre and 1.5-litre drove like two very different cars. The former was very comfortable, but the latter felt much more stiffly sprung and more responsive at higher speeds.

It turns out Honda re-jigged the suspension with grade specific tuning including shocks, springs, stabilizer bars and bigger wheels, resulting in the marked difference between the two, with Honda claiming best in class handling agility.

I applaud Honda for making a rearview camera standard, and also for its wonderful LaneWatch system that has a camera on the lower part of the right outside mirror.

When you flick on the right turn stalk, the camera pops on showing what is behind you on the right. Not only does it make turning a breeze, but the real benefit is, when passing, you can activate the stalk and you can see who and what is gaining on you – brilliant.

There are five basic trim levels starting with the DX at $15,750 which is, well, basic, with steel wheels and manual only, but it does have the rearview camera, power locks, rear disc brakes and keyless entry.

As mentioned at the top, Civic has been Canada’s sedan sweetheart for 17 years and looking at 2015 sales-to-date, it seems destined to be number one for the 18th year in a row. 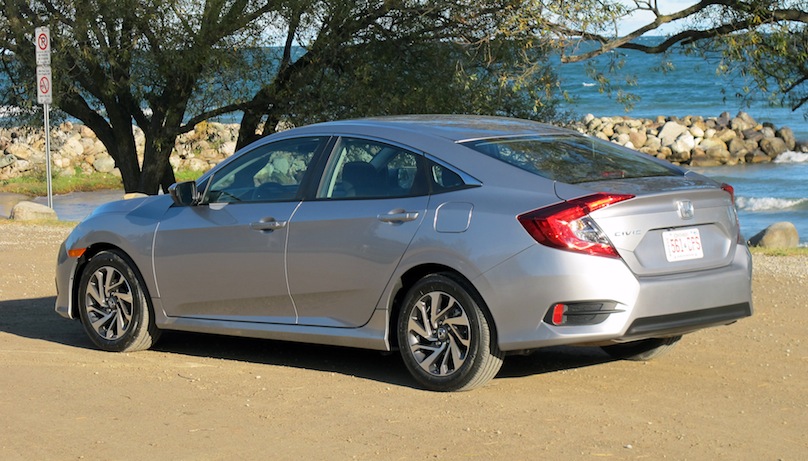