The M2 has earned its “M” laurels, and will put a smile on your face – and those of its M-ancestors – almost every time.

What’s worst: Snug interior is good for drivers, but that’s about it

What’s interesting: 365 hp means that while the M2 is the least powerful of all current M cars, it has almost 100 more hp than the original M car, the M1 supercar.

Let’s rewind back to the 1960s, for a moment. BMW in 1962, to be precise. After starting out in the aviation world, the German brand had moved towards building roadsters and grand tourers, often piloted by the rich and famous (even Elvis had a gorgeous 507 roadster; this is Mr. Pink Cadillac Elvis we’re talking about here). A worldwide fuel crisis was looming, however, and they needed something that would be able to keep them solvent as drivers began putting more and more of a premium on how often they went to the pumps for more premium. It didn’t help that BMW had been teetering on the brink of bankruptcy for quite some time, and needed something to buoy their sales.

So, with that in mind, they developed the “New Class” of sedans; small, 4-cylinder powered runabouts that kept the good engines and sporty handling characteristics of the older roadsters, but were much more frugally run.

Eventually, the “New Class” grew to the point where it was able to include some truly sporting models; enter the 2002 and its Turbo variant. These were quick, good-looking Hofmeister-Kinked coupes that could run you to the office one day, and smoke the opposition on the race track the next without too many mods. The era of the compact sport coupe had truly begun.

You May Like: XE takes Jaguar into a new era 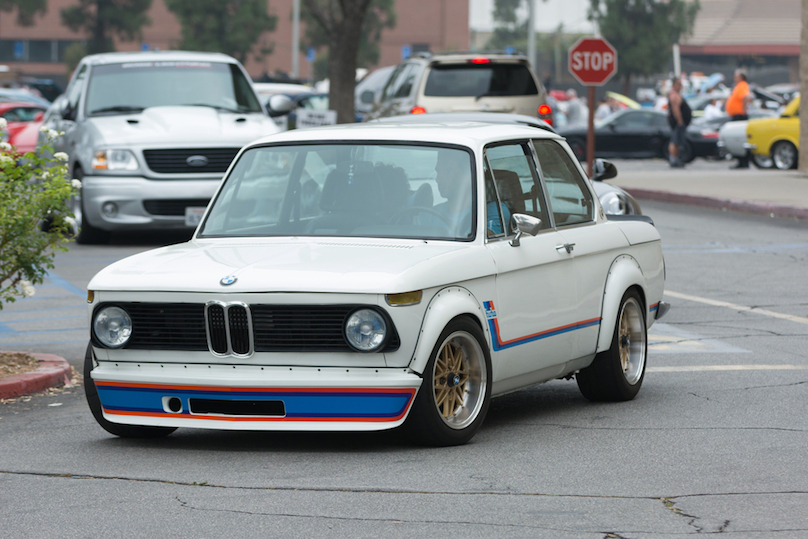 What follows is a timeline of one of the most recognized car brands of the performance world; the 2002 and its 3.0 CSL cousin gave way to the E30 M3, the E30 to the E36 and the E36 to the E46 designation, where we have to take a quick pause.

BMW insiders of the time likely knew it, but the public did not; the E46 was to be the last of the naturally-aspirated six-cylinder M3s. Every performance BMW before them save the 2002 Turbo was powered by a motor that had at least one of those features, but it was no longer to be. Six cylinders gave way to eight, then back down to six, but with a turbocharger this time. The old natch-asp motor just wasn’t going to cut it in the modern era; it was too heavy, too inefficient. Many BMW purists cried into their Bitters in Munich’s Hofbrau House.

Which brings us to the present day and the M2 you see here, finished in a gorgeous tint of Long Beach Blue; there are other colours, but I think of all of these that I’ve seen on the road – and there are lots, as dealers are unable to keep stock – I’ve maybe seen one in a different colour, and it was Alpine White, the only available colour that doesn’t cost more to get. 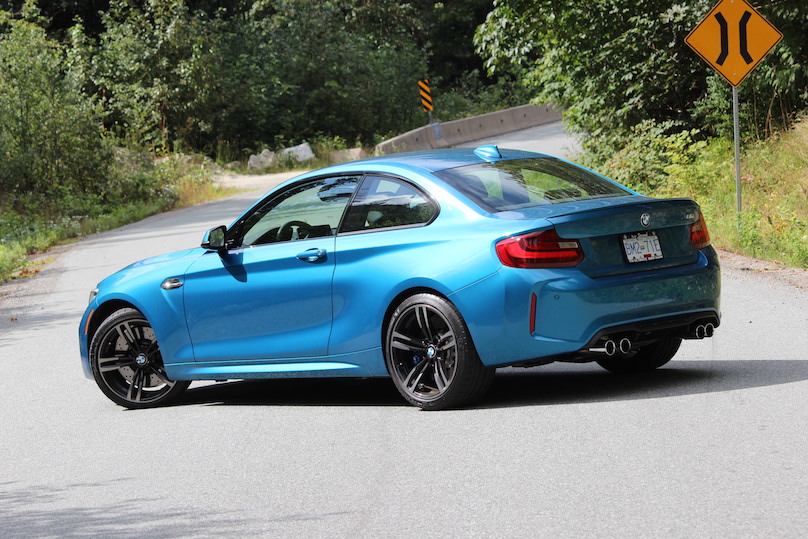 It’s this car’s job to succeed in an era of turbo everything, and if you’re not turbocharged, you’re hybridized. So, like its ancestors, it has to break that status quo, that there’s no longer room in this world for a rear-driven, big-engined performance compact.

We won’t go too deeply into which car we should call its inspiration; you could say the 2002, or the E30, or even the E46. Or, you could say it’s a compelling mix of all three of these; it sits closer to the original M3 in size than does the current M3, which is now sedan-only and quite a bit larger. Since it has a straight six-banger, we can look to the E46 and since it’s turbo’d we can look to that venerable 2002.

Or we can forget all that and just consider it for what it is: a very good and purposeful-looking (flared fenders, massive front bumper intakes and a rear bumpers flared with cooling ducts all do well to complete the transformation from a standard 2 Series coupe), brash and powerful rear-drive coupe that puts driving pleasure above all. 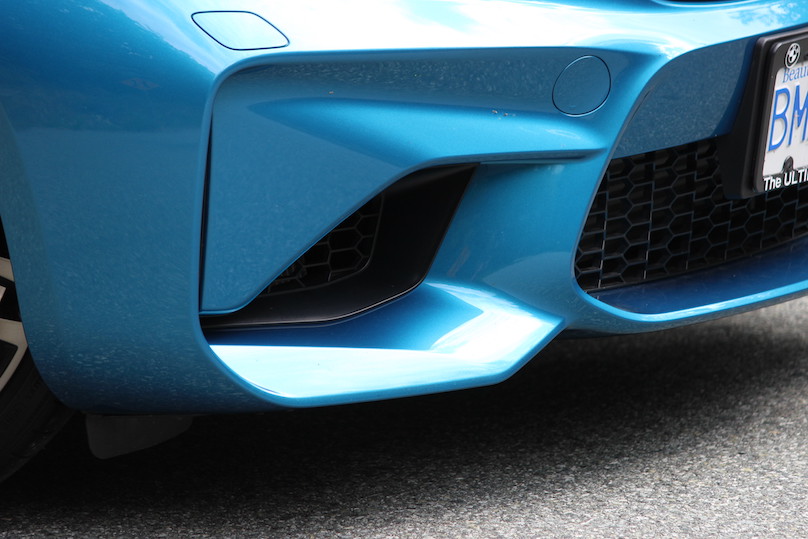 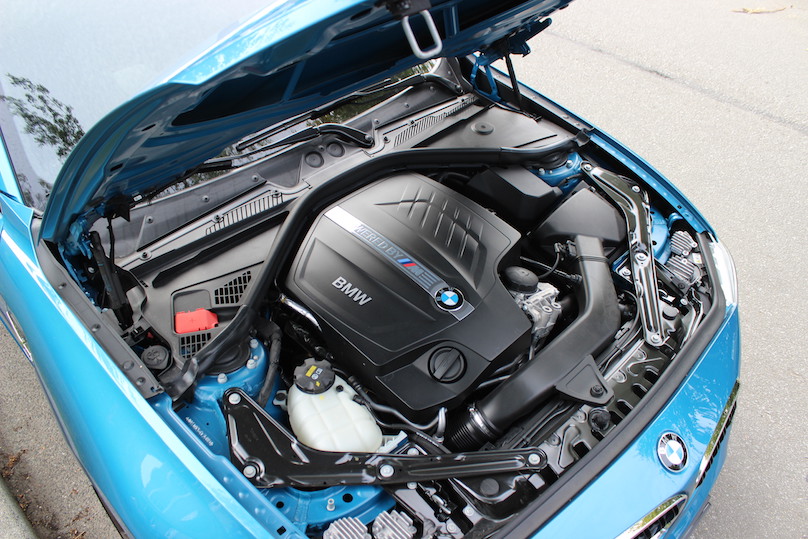 Better still is the fact that with just 2,692 mm between the axles, the M2 is easy to thread through traffic as well as the pines alongside your favorite B-road.

Stepping inside, however, will take you back a bit; the 2 Series is not a big car in general, and when you add the thick sport seats included here, the cockpit becomes even more coddling. That being said, I was surprised to find that while that is the case, I wouldn’t call the front seating area a cramped place to be. Really, what you get with the smaller environs is a set of controls that are that much easier to reach, a seating position that feels that much more “in” the car as opposed to “on top” of it. Of course, the seats are fantastically supportive as well.

The steering wheel is also fantastically chunky, and so you know you’re not sat in an “M Sport” car like the M2’s M235i cousin, but rather a “proper” M division car, the stitching on it is surrounded by the traditional “M” red and blue stitching. Oh, and of course, you’ve got red needles on your gauges, as opposed to white ones. 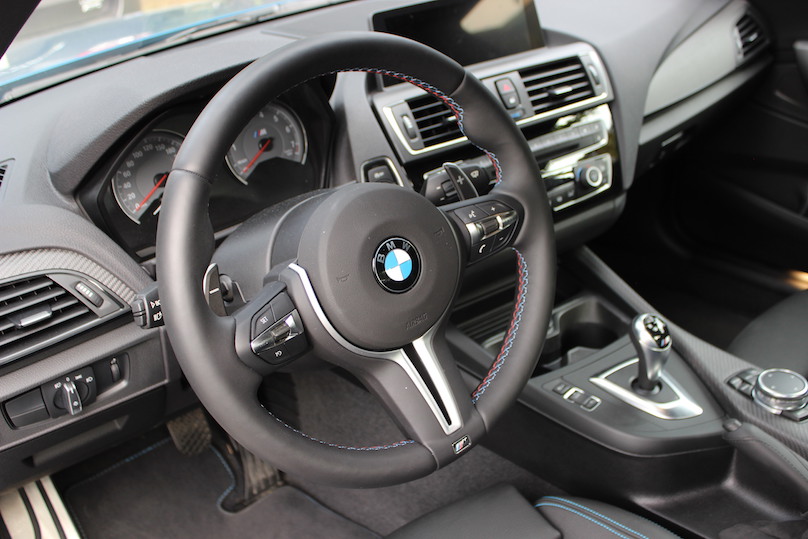 The gauges themselves do well to show how focused the car is; there’s no fancy digital trickery here; just an analogue tach and speedo finished in a pleasing shade of grey with white numbers. Yes, there’s a small digital trip computer between the two and down, but it’s fairly easy to ignore.

So their displays are top notch, but they look even better soon as you fire it up and send those nice red needles sailing around their respective gauge faces. Thanks to the M2 being turbocharged, the sound that accompanies such a manoeuvre is a little more muted than it was in all those great inline-4 and 6-powered M-cars of yesteryear, but there’s still enough tone through the big twin exhaust outlets to get the fizz going.

Of course, that’s made a little tougher still when there’s no clutch to dip, as was the case with our tester. It came with the latest M Double Clutch automatic. It’s got a pair of paddle shifters, of course, but if ever there was a small sports car in which you wanted – really wanted – to row the gears yourself, this has to be it. Plus, the auto will cost an additional $3,900 on a $61,000 car, so there’s that. Most people, of course, will be opting for the auto.

Oh, they will be snapping off quick shifts, though. In fact, the complete lack of power interruption and searing forward acceleration even made me – a diehard #savethemanuals guy – allow the “would I actually consider the manual?” thoughts to creep into my mind.

It’s such a quick, quick car this that the immediacy with which the gears are shifted just matches the complete lack of inertia found throughout not just the powertrain but the chassis, too. 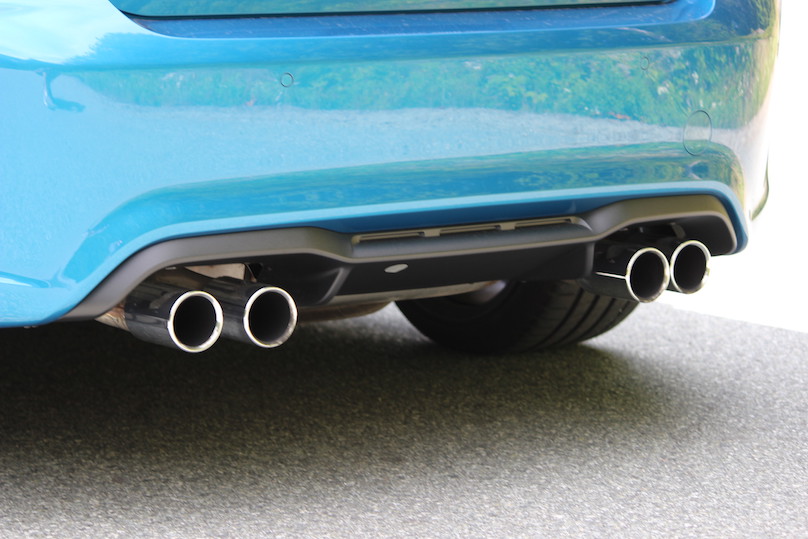 Yes, there is an electronic power steering system at play and it adds a little too much artificial weight to the steering, but it’s not so bad here as it is in other parts of the BMW line-up.

Instead, what you get is a surprisingly feelsome steering rack that is all about being direct. The steering tuning – especially in the most aggressive of four available driving modes – coupled with that short wheelbase has left-right-left transitions occurring in the blink of an eye. All that power, meanwhile, will have you to the next bend lickety-split so you want to be able to answer that challenge. Helping this is a set of active dampers that are always on the move, adjusting to the road conditions below. It all works in unison for a proper point-and-shoot experience.

The tires sure will help; Michelin Pilot Super Sports are sticky to start with. Wrap them around those gorgeous 19-inch wheels, attach them to a chassis as willing and planted as this, and you have car that acts like an extension of the human hands and feet that guide it.

Which is good. Mostly.

I guess this is me going back to my #savethemanuals tack again, but if there’s anything this car’s at risk of being, is too perfect. I was surprised by how little drama there was during my time with BMW’s latest firecracker. There’s no mistaking the M2 for its M235i brethren, of course, but I’d hesitate to say that you won’t mistake it for the 1 Series M Coupé it replaces, either. That was a car that drove as ornery as it looked – and ornery-looking it was, with its massively flared fenders and cooling gashes cut into its bumpers – at it represented the summit of the M stable at the time. Not in terms of price, mind; just the way it fulfilled the “M” ethos.

This, of course, is not to say the M2 is a poor car. Not by a long shot. It’s fantastically well-sorted, comes well-equipped with an array of electronic driver aids as well as infotainment – iDrive remains one of the better systems in the biz, once you get to know it – and will explode out of the barn like few other cars with this footprint. It’s great for all that. It’s not as quite as high on the drama as some of the cars before it, but there’s only a small slice of drivers that are likely going to care. For the vast majority, the M2 has earned its “M” laurels, and will put a smile on your face – and those of its M-ancestors — almost every time.