What’s Best: Great styling with more standard content than you would think. GS model comes with simple to use manual HVAC controls.

What’s Worst: Back seat is cramped and infotainment system takes a lot of practice to get right.

What’s Interesting: At the end of each drive the centre TFT displays a record of how well you are doing in terms of fuel economy.

The Mazda3 has won more than 130 international awards over the years and the reason is simple – soul of a sportscar.

The 2015 Mazda3, completely new from top to bottom, scored very well in this country last year, being named 2014 Best of the Best by the Canadian Automotive Jury, 2014 car of the year by Motoring TV and soundly taking its category in the AJAC annual TestFest.

What people who have long experience in reviewing new cars will tell you is that any Mazda you drive has a sporty feeling that is very much a design objective of the brand.

But the 2015 Mazda3 is very different from the ones that have gone before, including vastly different KODO styling language and Skyactiv engineering.

Skyactiv is now well understood and it is a complete suite of technologies all designed to cut weight and improve fuel economy.

The Mazda3 comes in two body styles, the Sedan and Sport (Mazda’s name for hatchback), and in Mazda hierarchy they start with the base GX, the mid-level GS and the toptrim GT.

All front-drivers, the GX/GS are equipped with the 2.0-litre version of the Skyactiv DOHC inline four-cylinder with 155 hp and 150 ft/lb of torque.

There is also a 2.5-litre Skyactiv four-cylinder on the GT with 184 hp and 185 ft/lb of torque but we are dealing with the GS in this review.

A six-speed manual is standard on all trim levels with the GX and GS having an optional six-speed automatic. The GT also gets a six-speed automatic but it is enhanced with sequential manual shift, paddle shifters and a “Sport” button which changes gear mapping for more power when needed. 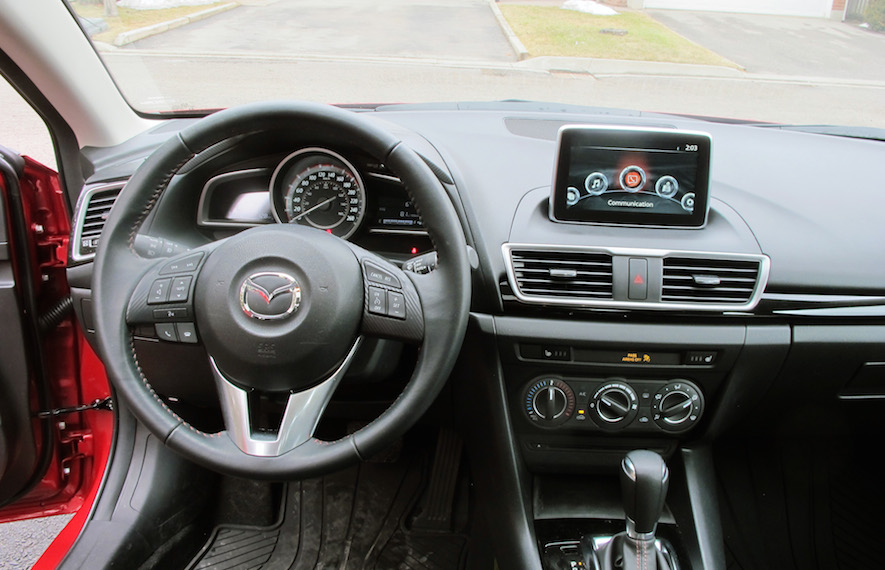 You will note the numbers for the automatic are marginally better than the manual, which is a result of the Skyactiv engineering on the gearbox by cutting weight and friction.

At the end of each drive, the centre TFT screen displays a record of how environmentally naughty or nice you have been as a driver.

The 2015 Mazda3 sits on a generous 2,700 mm wheelbase, but its KODO styling and low roofline make it appear smaller than it really is.

Much of this is due to the long hood and short rear deck that gives the Mazda3 Sedan as tested a classic grand tourer look.

You find the reason why in the engine bay, where the four-into-two-into-one Formula One style exhaust manifold’s inherent straight back architecture means space had to be made between the engine and firewall to give the manifold room.

A down side is rear seat legroom, which is very tight for passengers if the front seat is all the way back on its track.

Also the high rear deck line needed to create a modest 350 litres in the GS Sedan makes the driver grateful for the standard rearview camera.

Cargo space in the Sport is much better at 572 litres behind the back seat and 1,335 litres folded. 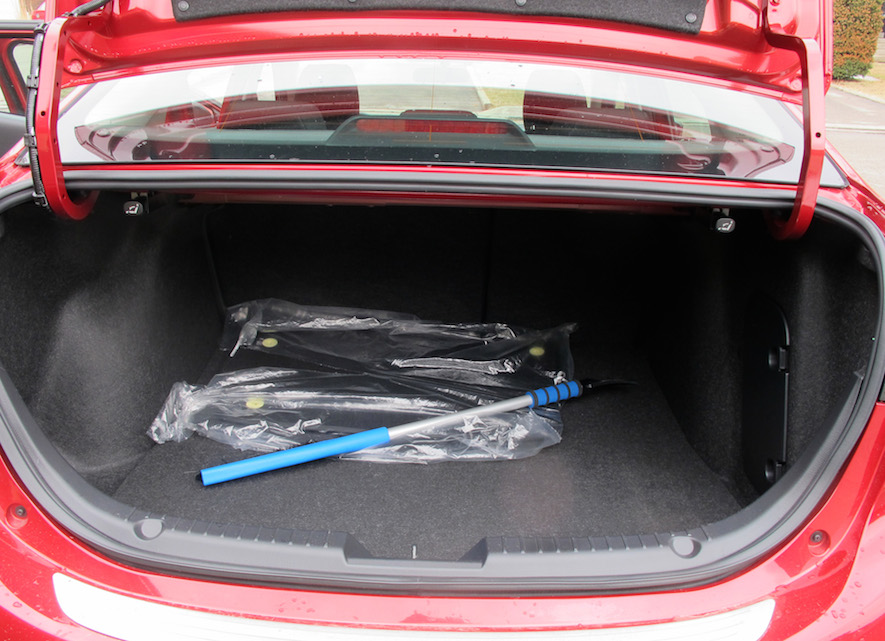 It’s an either/or thing. The swoopy lines of the Sedan are more pleasing to the eye, while the Sport has the room.

But the surprise was the engine.

I was expecting the 2.0-litre to be anemic, especially with the automatic, but such was not the case.

The week before I had a Mazda CX-5 CUV with the 2.5-litre Skyactiv engine and it was growly and sluggish on start up, but the 2.0-litre as tested was not.

Also, the transmission seemed to more sympatico with the engine and this in a car that was barely broken in. 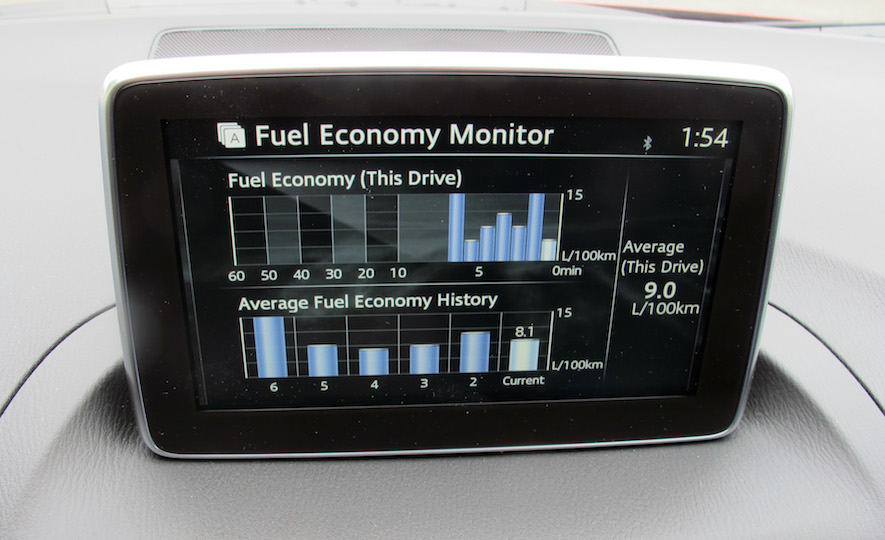 While not as quick as our 2010 Sport, the GS was not that much slower, but the noticeable difference was in the handling.

The 2015 GS as tested felt more relaxed in daily driving, which is probably due to the fact the 2010 has a five-speed manual, not a more flexible six-speed.

Where the GS really shines is in the price, which starts at $19,795 with $3,350 in options, which includes $1,200 for fog lamps and a power sunroof, which I could happily live without but my wife loves.

But at $550 it’s probably worth it, especially because my good wife can no longer imagine living without rain-sensing wipers.

Last, $300 for the Soul Red Mica exterior paint is a bargain for one of the best colours I’ve seen in years, bringing the grand total to $23,145 not including a $1,695 shipping fee.

Summing up, it comes down to whether or not Mazda has been able to keep the Mazda3, as one of the best selling compacts not just here in Canada, but around the world.

The trick for Mazda for the 2015 model was to incorporate all these changes noted above, without sacrificing the core of Mazda’s soul of a sportscar spirit.

Based on the awards won to date, the 2015 Mazda3 is well on the right road. 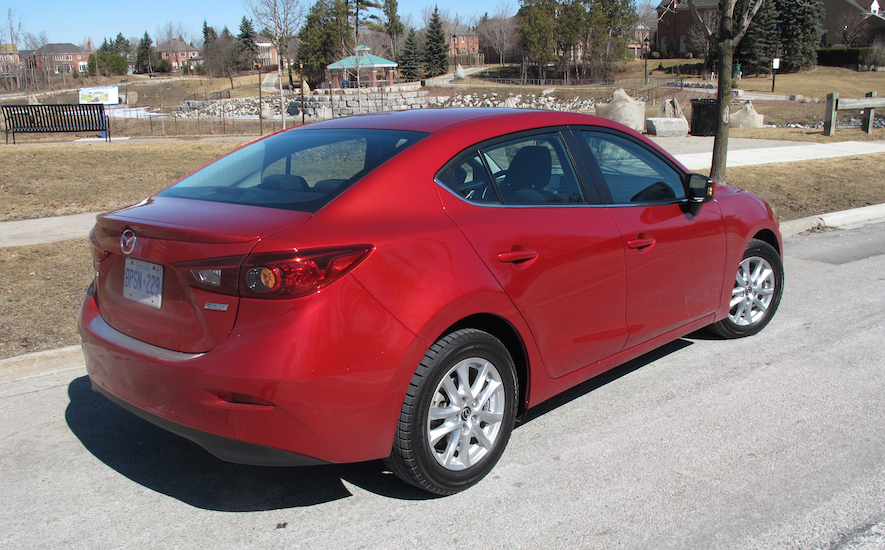