It’s bold, brash and beautiful and the 2015 Corvette Stingray is just so much fun to drive.

Now in its seventh generation, the iconic Corvette Stingray remains the performance flagship of the Chevrolet brand.

While parent company General Motors has seen its fortunes dim over the years, the Corvette has remained a shining light for the Chevrolet brand even after all these years since it debuted in 1953.

The C7 (seventh generation) Corvette bowed in 2014 and was named North American Car of the Year. For 2015 the big news is the introduction of the Z06 model. This is the fire-breathing world-class supercar that boasts 650 hp and 650 lb/ft of torque.

But for most of us mere mortals, the regular Corvette Stingray in coupe or convertible format remains the vehicle of choice.

The combination of performance, styling, pizzazz and value for the dollar makes it an attractive option to the pricier European and Asian sports car contenders on the market. The Stingray is offered in 1LT, 2LT and 3LT trim levels.

We had an opportunity for an extended drive in the 2015 Corvette Stingray Convertible during last fall’s Car of the Year testing conducted by the Automobile Journalists Association of Canada (AJAC).

Chevrolet calls the 2015 Stingray “the quickest, most powerful, most capable standard Corvette ever made.”
We can’t argue that.

Featuring a 460 hp 6.2-litre direct injection V8 engine, the 2015 Stingray is available with a seven-speed manual transmission or a new eight–speed automatic.

For those who want to up the speed and handling quotient without going all the way to the Z06 model, Chevrolet is offering a Z51 performance package on the Stingray. This includes unique design and wheel features, performance exhaust, suspension and brake systems and upgraded performance summer tires.

Our tester had the seven-speed manual transmission, which had a nice feel and was easy to shift. It is a very quick car on the straightaway but also performed well through the slalom course AJAC had set up at Car of the Year. The Stingray showed great balance and grip in the tight corners, thanks in part to a 50/50 weight balance.

This is one gorgeous looking car that looks fast even when it’s standing still!

The convertible version is stylish with the top up or down. Said drop top is fully electric and can be lowered remotely using the key fob or at speeds up to 50 km/h without the need for mechanical latches. The top can be lowed in 21 seconds. When the top is down, it hides seamlessly beneath a body-coloured tonneau cover.

The Stingray coupe and convertible share an identical rigid aluminum frame structure. Since this was originally designed as an open top vehicle, the convertible model is just as rigid as the coupe.

What once was the Achilles heel of the Corvette is now one of its strengths— the interior is vastly improved in the C7 redesign. 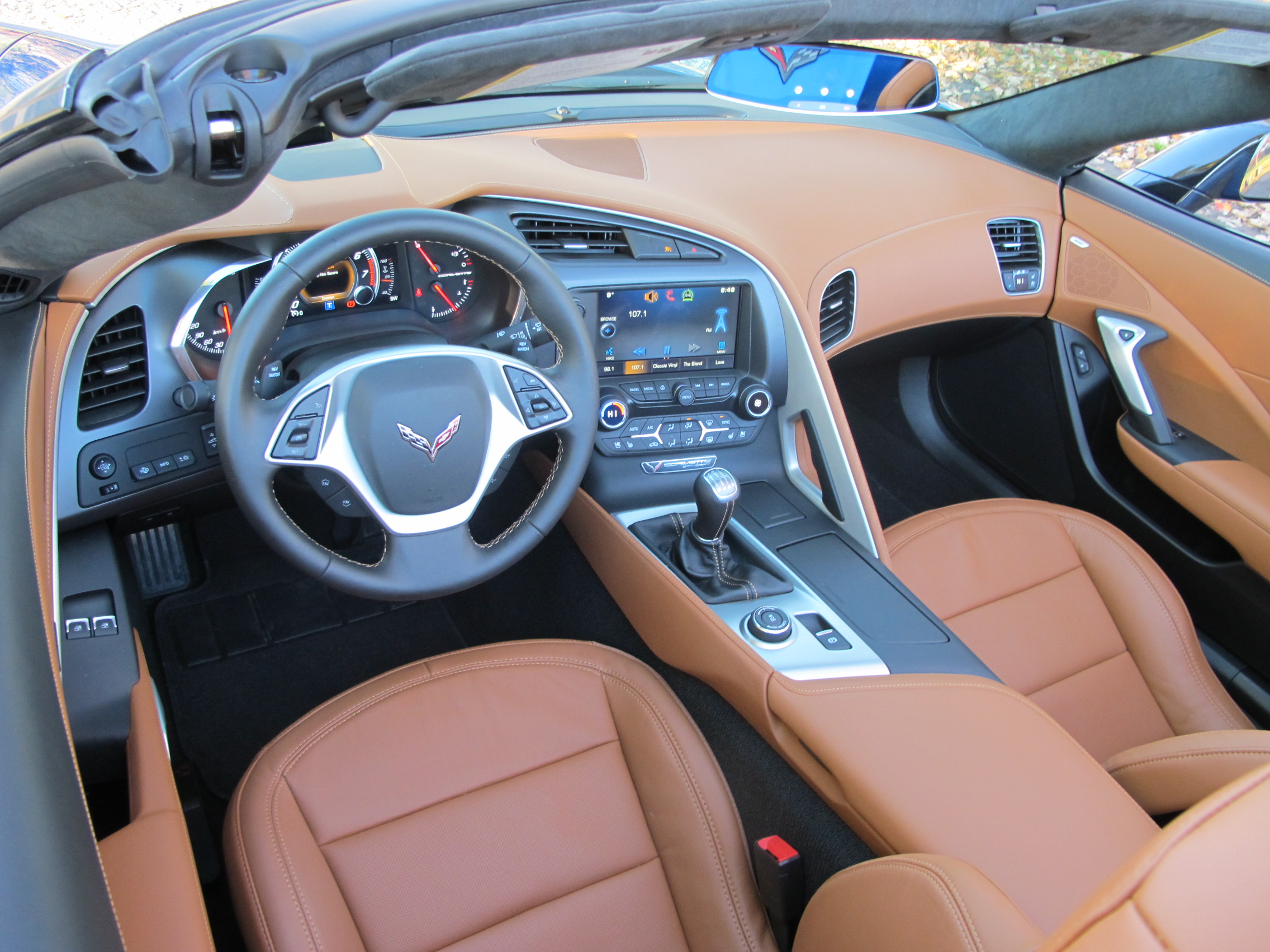 The thick fabric top along with sound-absorbing padding and a glass rear window contribute to a fairly quiet cabin when the top is up.

Information abounds on the two 203mm (8 inch) display screens as well as an available colour Head-up Display that shows speed and other information at the base of the windshield.

Instead of fading into the sunset, the Corvette Stingray gets better with age. In terms of value for the dollar, there isn’t another comparable performance two-seater in the same price territory. 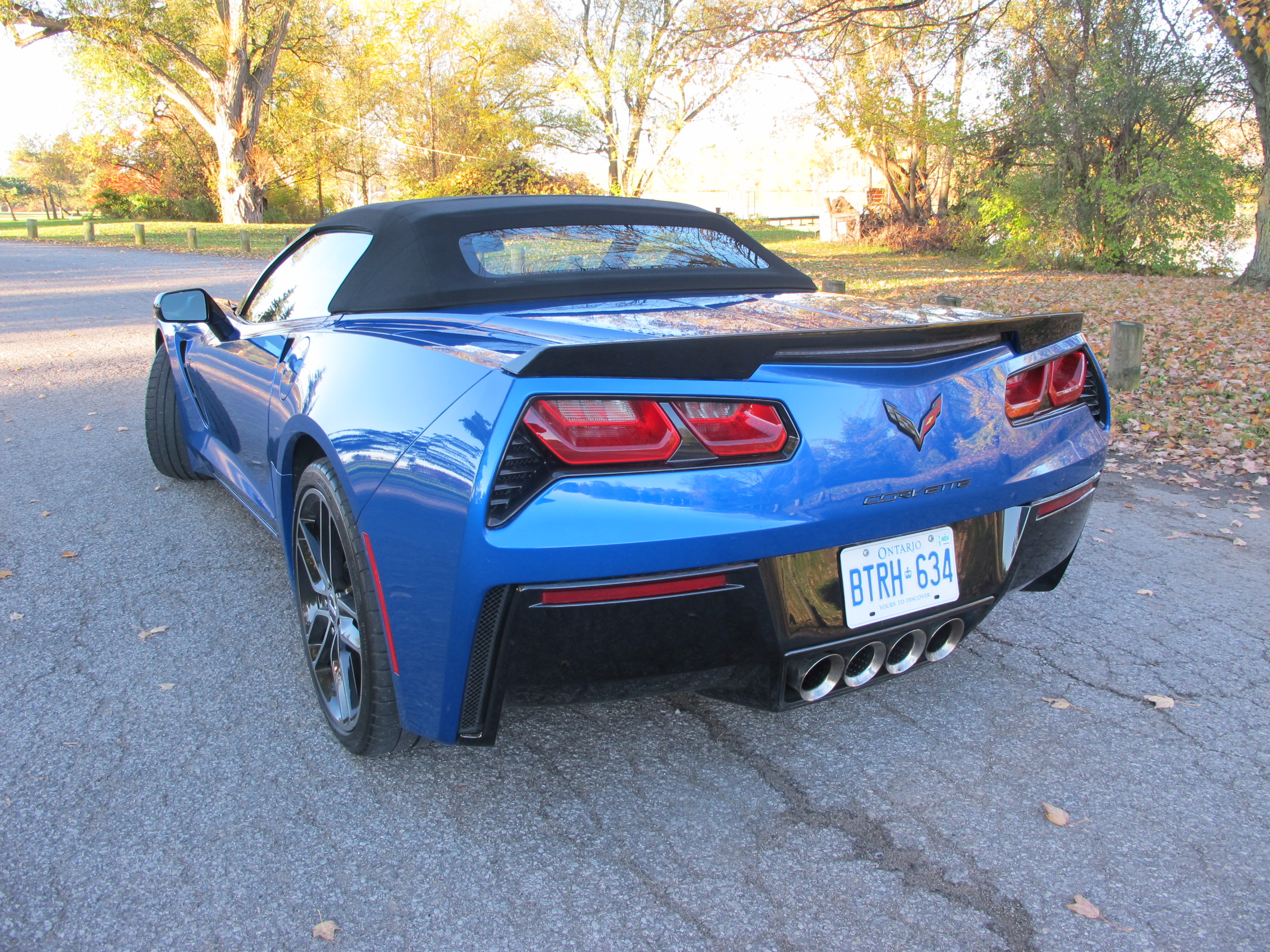