The M4 Cabriolet is a new model for 2015, replacing the last generation M3 convertible. It has a twin turbo 3.0-litre inline 6 engine, making 425 hp, up 11 hp over the previous model.

What’s Best: Get open-top driving and performance to boot.

What’s Worst: Not the same performance as the M4 Coupe version, but no slouch nevertheless.

It was a sunny, but bitterly cold early February morning when I ventured up to BMW Group’s Canadian headquarters north of Toronto to pick up a 2015 M4 Cabriolet for a weeklong road test.

Just a day after the biggest storm of the winter paralyzed parts of the Great Toronto Area with up to 30 cm of snow, it was far from an opportune time to be driving a 425 hp performance car, let alone a convertible.

Yet there I was and BMW product specialist Rob Dexter assured me that the car was outfitted with winter tires and would do just fine in these wintry conditions.

As I pulled away from the BMW offices past open fields where the gusty winds were whipping snow into drifts and covering the roadway with a slippery coating of snow and ice, I was taken aback at the civility of the M4 when driven in a smooth and careful manner.

But the thing that struck me the most was the quietness of the cabin.

There were no squeaks or rattles in the hardtop convertible roof of the car, even though the temperatures were in the -20C range with the wind chill.

Over the years, I’ve driven several of these retractable hardtops, but none as quiet as this one.

Even when I pulled onto Hwy 407, the cabin was a quiet and peaceful place. Sure there was a bit of wind noise as you would find in any vehicle, but nothing to make the atmosphere unpleasant and certainly less than one would expect in a convertible.

Most well heeled cabriolet buyers park them in the garage for the winter in Canada, but the M4 is definitely one convertible that can be a four-season driver if need be.

Proper winter tires are a must and driving through deep snow drifts would be out due to the low-slung front spoiler and nose of the car, but otherwise this could be a vehicle for all seasons, especially with the retractable hardtop rather than a ragtop.

Our M4 Cabriolet came with a base price of $84,500, but with stand-alone options and packages, the as-tested price was $98,750. Included was the Executive Package ($4,500) that features active LED headlights, surround view and full Merino leather. 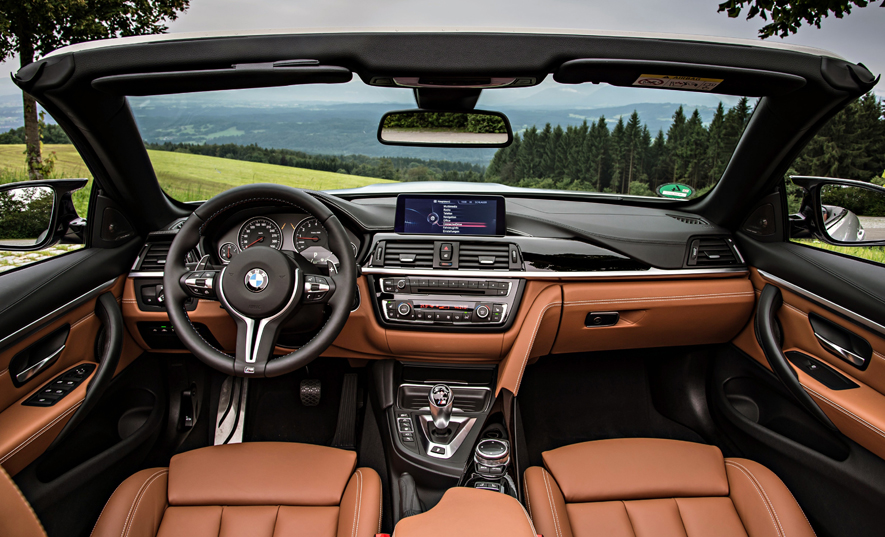 What makes the 2015 M4 Cabriolet a desirable car in my opinion is that it has all the performance goodies that come with one of BMW’s ‘M’ models with the added benefit of a retractable hard top for top-down cruising.

For those new to the BMW brand, ‘M’ models are similar to ‘S’ in Audi-speak— they are the high-performance versions of a particular model with specially tuned engines and suspensions and body modifications to set them apart from the general auto population.

In BMW’s case, the modifications are done in-house and the 2015 M4 Cabriolet was new to Canada in fall 2014, following the earlier introduction of the M4 Coupe and M3 Sedan.

The M4 Cabriolet is powered by a twin- turbo, 3.0-litre 6 inline six-cylinder engine, producing 425 hp and 406 lb/ft of torque. It is available with either a six-speed manual or the seven-speed M double-clutch transmission found in our tester.

With weather conditions as they were for our test period, we didn’t try much spirited driving, but suffice it to say, you know the power is available when you need it. The double-clutch transmission takes some getting used to, but it allows the driver to make gear changes with no interruption in the flow of power. Shifts can be made with the selector lever in the centre console or the paddle shifters on the steering column.

Related: Avoiding the wind – in a convertible!

BMW has Drivelogic that allows the driver to select a particular shift mode— comfort, economy or sport. A launch control function with the M DCT allows for quicker launches off the line. There are also Comfort, Sport and Sport+ modes for steering and suspension settings.

Weighing in at 1,839 kg, the 2015 M4 Cabriolet has shed 41 kg from its previous version, thanks in part to the use of aluminum in the front fenders, hood and chassis. Extensive use of lightweight, but stiff and durable carbon-fibre-reinforced plastic also lends to the weight reduction. Nevertheless, it is still 250 kg heavier than the M4 Coupe.

On the design front, the M4 Cabriolet is a gorgeous car from any angle. From a front view, there is no doubt this is a BMW. From the twin headlights (with optional LED technology) and the twin bar kidney-shaped grille, there are distinctive BMW design clues.

Inside are a number of features that let you know this isn’t just any BMW, but it’s an ‘M’ model with M door-sill plates and M driver’s footrest, steering wheel, gear shift lever and special circular instruments with white graphics.

The front sport bucket seats get the M treatment with electric adjustments and heating. There is even an illuminated M logo on the seat backrests and three-temperature neck warmers for comfort during open air driving when the temperature dips. 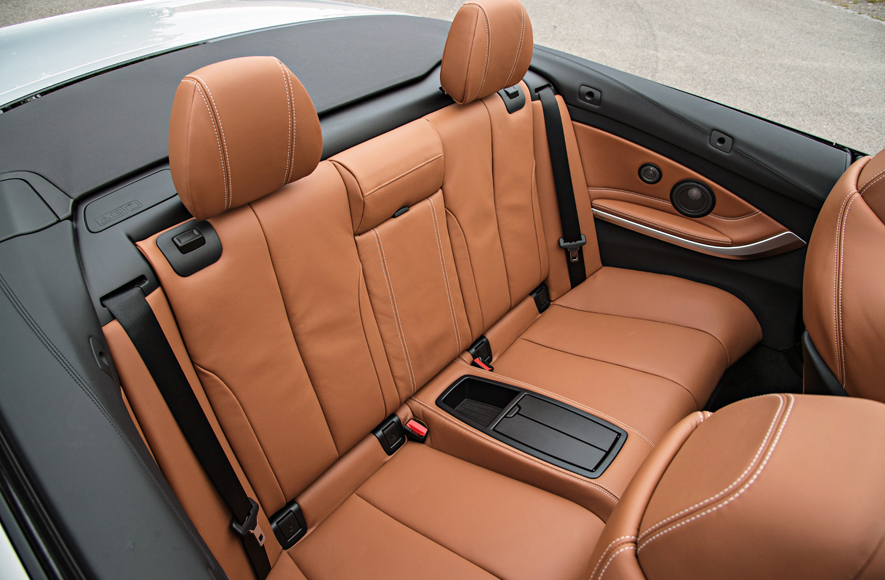 Unfortunately, the temperature dipped too much for me to do any open air driving during my time with the car, but I did retract the top on one occasion. It slips back neatly into its trunk space in about 20 seconds. It is possible to put the top down at speeds of up to 17 km/h.

When the top is upright, trunk space is a generous 370 litres, dropping to 220 litres with the top down. Convertibles often are cargo-space challenged, so these numbers are actually quite good.

And folding down the backrest of the rear seat to create a flat and level storage area can expand the cargo area even further. For skis or hockey sticks, there is a smaller opening in the middle of the rear seat.

All in all, the M4 Cabriolet may not offer quite the same driving dynamics as the M4 Coupe or the M3 or M5 sedans.

However, for anyone who enjoys open-top driving in a performance car, the 2015 M4 Cabriolet can deliver it with the best of what European manufacturers have to offer. 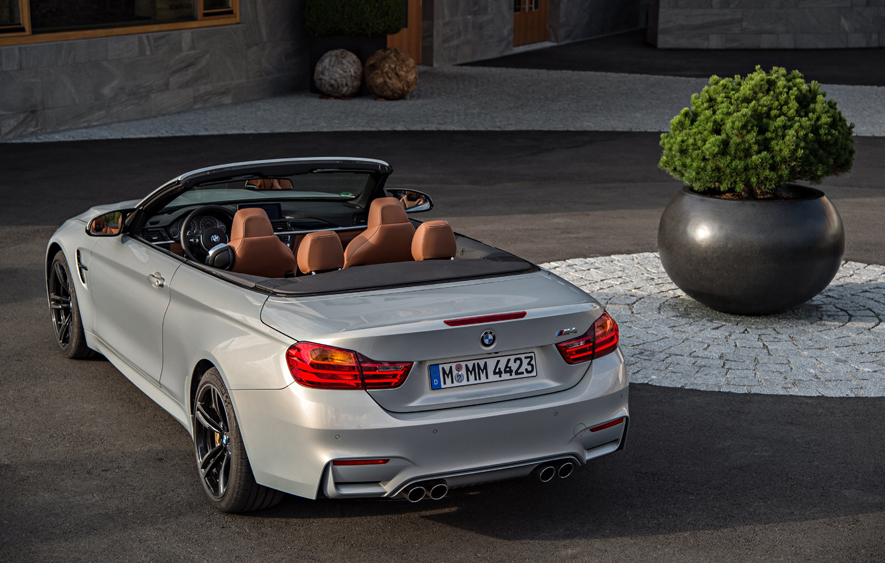