The Acura Integra Type-R is the ultimate non-Honda: it is not perfectly well-rounded, it is raw and unrefined and loud and crazy. It's a a car that challenges you to ignore its many rough edges and to forget its contradictions.

The Acura Integra Type-R is the ultimate non-Honda: it is not perfectly well-rounded, it is raw and unrefined and loud and crazy. It’s a a car that challenges you to ignore its many rough edges and to forget its contradictions.

That you manage to fall in love anyway is a testament to what a wonderful piece of machinery it is.

To whit: this car is a supposedly stripped-down, lightened version of the two-door Integra, yet it has the most expensive and rare badges; with their lacquered plastic bubble on them, they look at least twice as substantial as the normal hollow piece.

You can’t de-fog your windows, but you can hear the engine’s noise drown out the almost-useless-at-speed CD stereo.

The Type-R’s interior is a blend of luxurious and spartan. Its manual seats are upholstered in a lightweight, rough-but-grippy fabric, yet their side bolsters â€” like the center-console armrest â€” are done up in gorgeous suede with red stitching.

The car’s headliner is made of cheap’n shiny plastic, but the instrument panel has carbonfibre accents.

There is no alarm system, but the ignition key, with its oval shape and inscribed aluminum inserts, is the most beautiful I’ve ever seen.

Driving the Type-R is a contradiction as well. When running gently, you can’t believe anyone would pay extra for a car that throws away a lot of the regular Integra’s silence and refinement or a clattery idle and a gutless pull away from stoplights.

The lack of sound insulation and lightened materials right down to a thinner windshield means that the R is loud and, in rushhour traffic, a tiring place to be. The stiffened, stir-your-insides suspension doesn’t help either.

But on an open stretch of road, none of that matters anymore.

The engine at 5700 rpm â€” where the VTEC works its magic â€” transforms itself, wailing, snarling, screaming its way to the 8900 rpm redline in the blink of an eye. 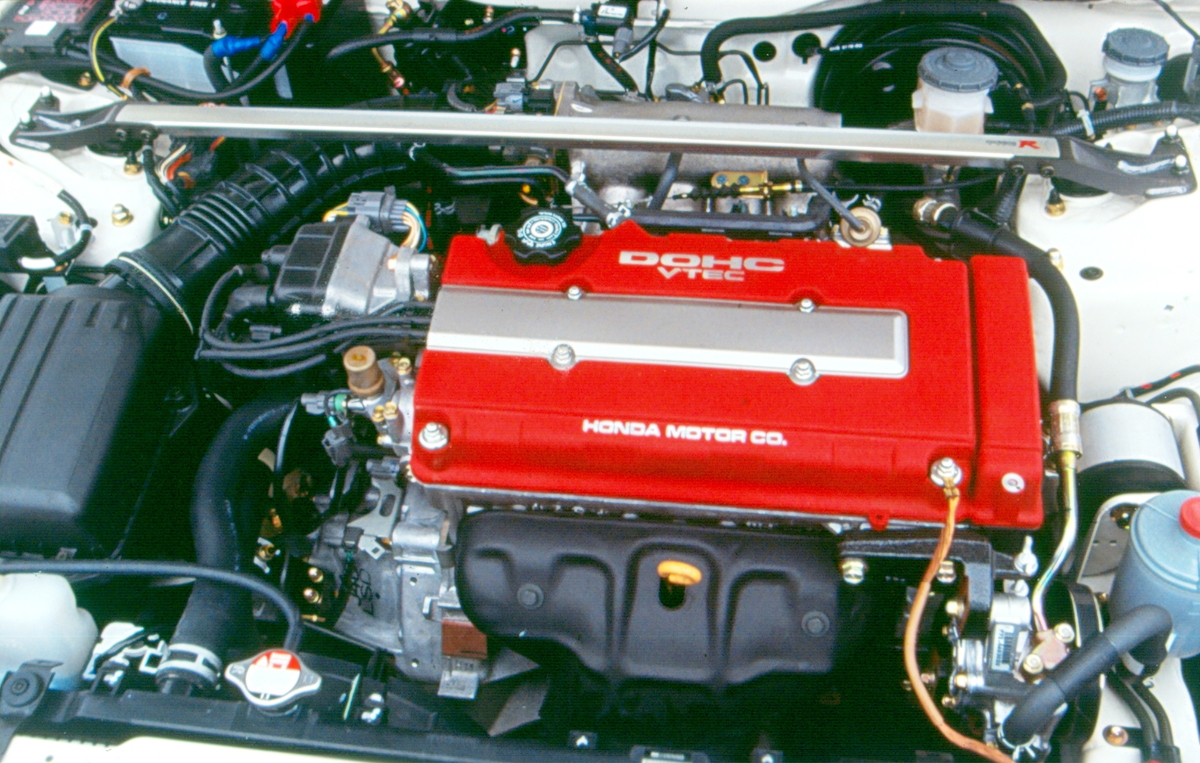 So too the harsh suspension. Throw the Type-R into a corner, and it charges through without a complaint, with no slipping tires front or rear. It goes exactly where you point it, corners flatter and quicker than any front-drive car I’ve ever driven.

The brakes, touchy at low speeds, are confidence-inspiring when going fast.

If you buy an Integra R, you will hate it a lot of the time you are in it. It grumbles and harrumphs in the city, it punishes you over every parking lot speed bump and its big rear wing ruins your view to the rear.

But car enthusiasts, unlike most of the general public, buy cars not for the daily commute, but for those few breath-taking moments every week when we frolic over twisty roads and hurl the things into corners â€” when we rev and rev and revel in the sound and fury of a great engine at work.

These moments, however brief, are intense and thrilling beyond description in the Type-R, and they’ll more than make up for the car’s annoyances.

In fact, they’ll likely transform annoyance into anticipation of which roads you’ll attack, once the weekend rolls round.

A word about those cool badges: they cost $80 each and you will replace many of them. They were stolen off my test car before I’d had it for even a day, and a subsequent conversation with the parts person at an Acura dealer confirmed that every Type-R owner replaces them at least once in the first month.

Leave them off after the first time and you’ll be driving an even more perfectly compromised car, and will be saving a lot of money as well.