Subaru has engineered some of the idiosyncrasies out of its cars ... but has still managed to retain some of that weird charm. Not unlike our favourite band from Scarborough, then.

Every Canadian worth their maple-flavoured bacon knows of the Barenaked Ladies. No, no, no – not the ones over on that naughty video site. We’re talking about the Canadian alternative rock band who played for several years as an indie label before bursting on to the larger scene with a major record deal in the early ‘90s. Quirky, talented, and amassing a cult following, BNL went on to breakthrough mainstream success but never really lost that original charming weirdness that so endeared them to legions of fans in the Great White North.

Sound familiar? Of course it does. At inception, Subaru peddled very capable sedans and wagons that were, with the kindest descriptor available, totally left-field bizarro weird. The SVX coupe featured windows-within-windows, the Loyale looked like the box it was delivered in, and those utilizing the rear-facing exterior seats in the bed of a BRAT would quickly find themselves using their noggins as a roll bar if the operator failed to keep the thing shiny-side up.

They were all extremely capable vehicles, though. The company loved to remind us of the beauty of all-wheel drive, building a cult following who swore by (but not often at) their quirky little boxes from Japan. Over the years, and in the name of chasing more widestream success, Subaru has engineered some of the idiosyncrasies out of its cars … but has still managed to retain some of that weird charm. Not unlike our favourite band from Scarborough, then. 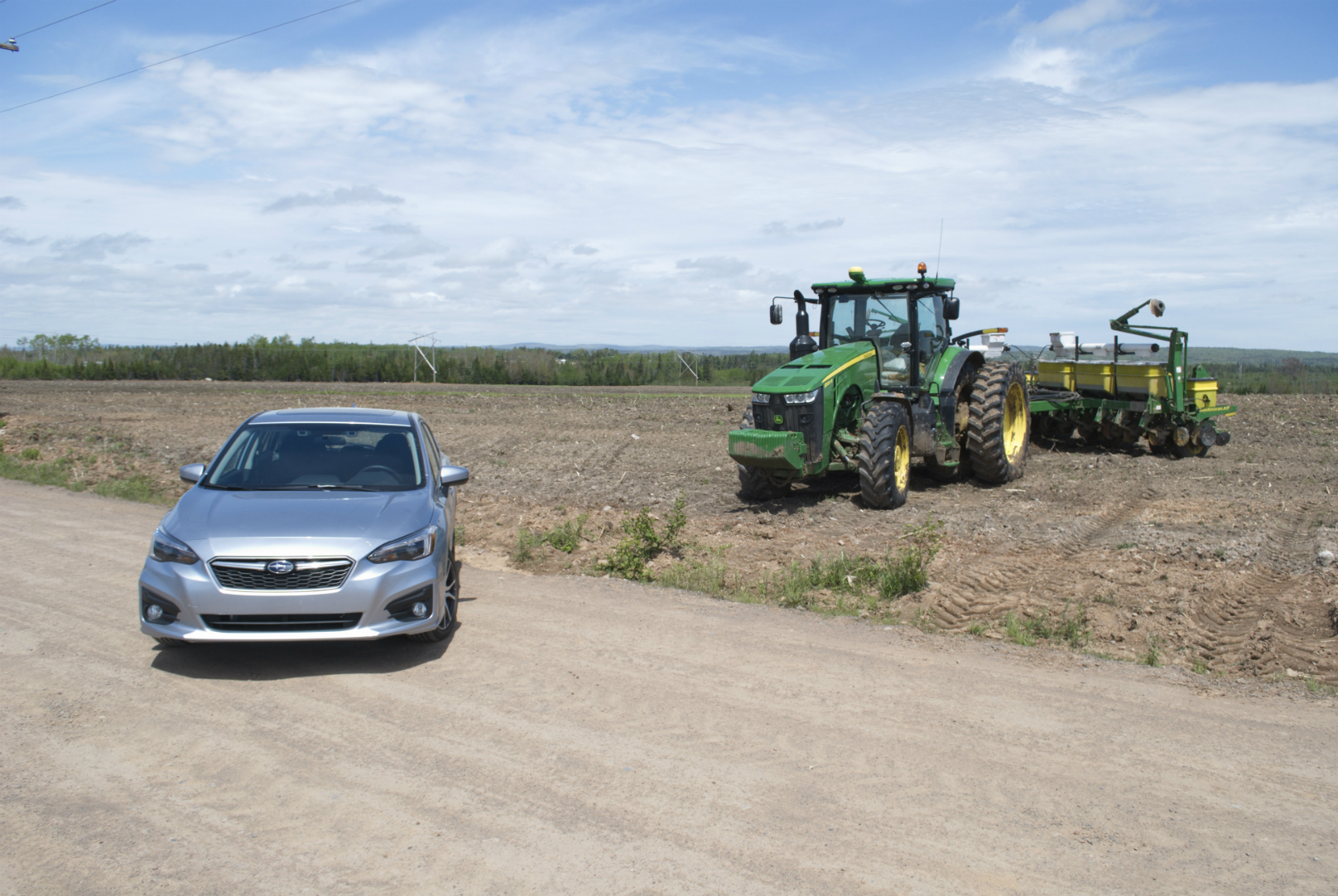 Seven days is the generous amount of time we’re given to sample a vehicle from an OEM press fleet. Using the car to shuttle the family around town, run a few errands, and take a jaunt or two on the highway allows us the chance to evaluate the machine on a level not found during a quick test drive.

Our tester was a 5-door model in 2.0i Sport trim with the optional Technology package, stickering at $29,690 including freight. Subaru has always chosen to stick with a boxer layout for its engine, in which the four pistons are laid flat and horizontally opposed rather than standing straight up in a line like the guards at Buckingham Palace. This piston placement allows the engine to sit lower in the car than a traditional motor, contributing to a more favourable centre of gravity and better handling.

Making 152hp and 145lb-ft of torque, the Impreza won’t challenge any Top Fuel dragsters but power delivery from its 2.0L engine is very linear and is more than capable of getting out of its own way. Paired with a continuously variable transmission, the car did a reasonable job of simulating actual gear changes thanks to its pair of paddle shifters behind the leather-wrapped steering wheel. A manual transmission is available at this level if buyers choose to forgo an optional Technology Package.

Inside, Subaru designers have engineered a solid effort. Comfortable bucket seats are installed up front, fitted with deep seating surfaces that help support those of us who are long of leg. Durable textured fabric covers the seats in this Sport trim, feeling as if it will wear well over the long term. The armrest on the driver’s door is pleasingly soft and squishy, like resting your elbow on a fat puppy.

Rear seat accommodations are more than sufficient for families with two small kiddos, although the space is bereft of USB ports and heating vents. A handy centre armrest with dual cupholders swing down from the rear seatback which can be further flipped and folded in a 60/40 split to expand the already commodious and well-shaped cargo area.

Also Read: Mazda3 retains the “soul of a sportscar” 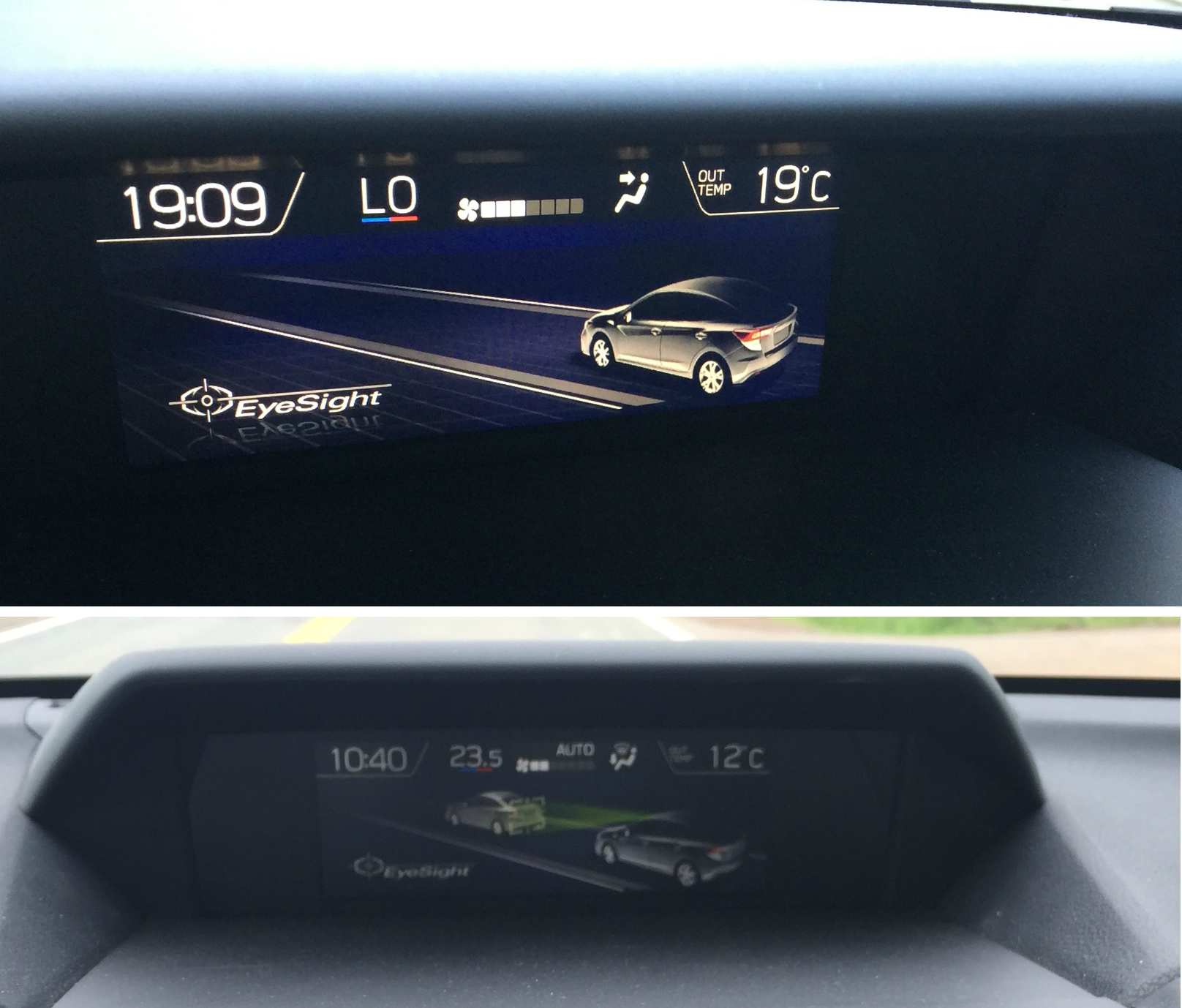 What are buyers be giving up if they purchase an Impreza sans Technology Package? Externally, not much. But there are a few gee-whiz features in the Tech Pack that do make life a bit easier during the morning commute. Subaru’s quirkily named EyeSight system bundles together a yaffle of safety nannies such as adaptive cruise control, lane departure warning, and lane keeping assists.

Pre-collision braking and throttle management allow the Subie to help mitigate a collision in emergency situations such as when that delivery truck decides to suddenly cut across two lanes of traffic on a busy DVP. Reverse automatic braking looks for objects directly astern and applies the brakes if the driver is about to run over Junior’s bicycle he left in the driveway.

This is one place in which the Impreza shows off its trademark Subaru weirdness. Most of the forward-facing EyeSight features are handled by twin cameras tucked ahead of the rearview mirror near the brim of the windshield. Whatever the system ‘sees’ – other cars, flying saucers, or Cthulhu – is then displayed on a colour screen atop the Impreza’s dashboard. Vehicles detected immediately ahead are shown enveloped by a yellow beam of light emanating from a digital representation of the very car you are driving, bringing to mind Captain Picard snagging a Romulan Warbird using the tractor beam on his Enterprise-D.

One can muse about the real-world implications of a machine suddenly taking over braking duties from its operator, but EyeSight is a wonderful party trick and a glorious throwback to the days when nobody out-weirded Subaru. This same colour screen can be cycled through to display an array of equally strange information, such as the vehicle’s current level of incline. Cementing its dedication to keeping just a bit of quirk, the button for disabling the Impreza’s lane keeping system is on the roof.

It’s All Been Done 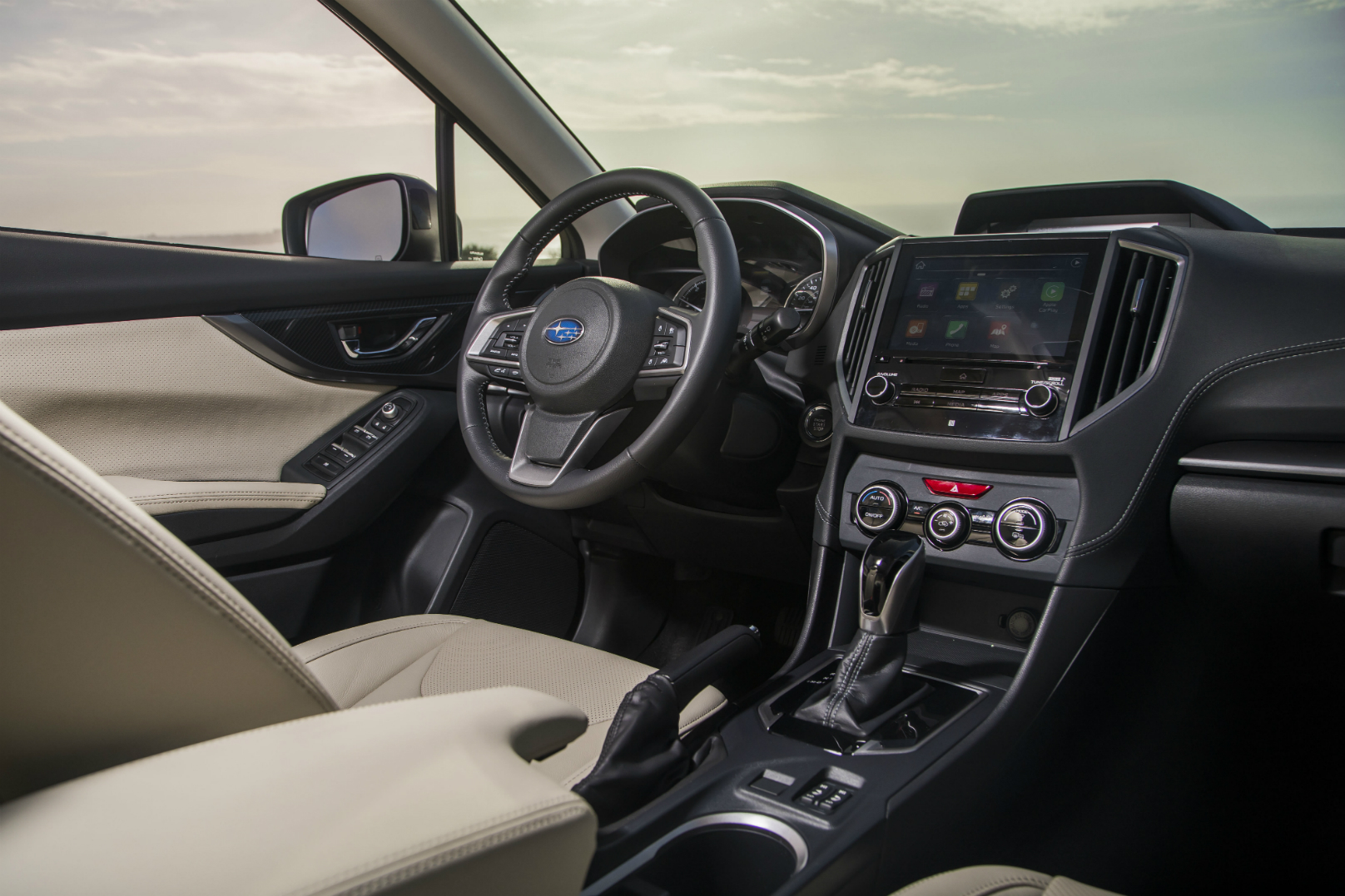 Naturally, this mid-range Impreza has standard features which are found on plenty of other compact 5-door hatchbacks, such as heated seats (with power adjustments for the driver) and a steering wheel which adjusts for reach and rake. Apple CarPlay and Android Auto are present and accounted for on all models but SiriusXM satellite radio doesn’t appear until this Sport trim.

Even here, Subaru chooses to do the mundane and expected in just a slightly different way. For example, in a world where most heated seats are controlled by virtual buttons, the boffins at Subaru have seen fit to bestow actual switches in the Impreza. Thank you. This means the heating elements will not turn themselves off when drivers stop the car and nip into Tim Horton’s for a double-double.

Over 295km of driving primarily on rural roads, the 2017 Subaru Impreza 2.0i Sport burned 24.4L of regular fuel, returning an agreeable 8.3L/100km. Transport Canada rates manual-transmission Impreza sedans at 10.0/7.7 on the city/highway cycles, while CVT-equipped models are rated at 8.3/6.4 for the same measures. Yes, for once, the stickshift is rated significantly worse on fuel than its automatic brethren. Blame (or credit) the CVT and its propensity to prioritize economy over performance for this oddity. 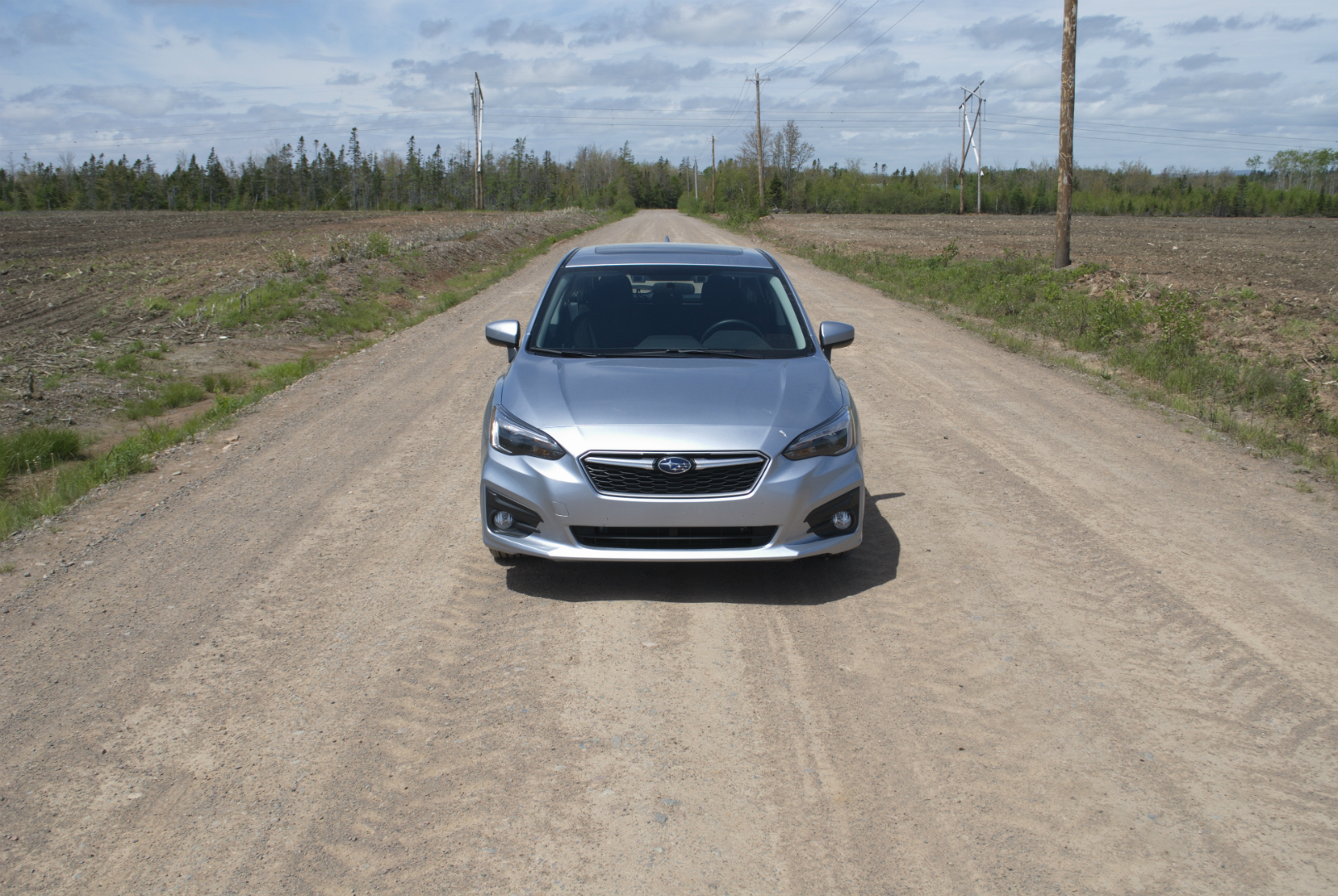 What would I change about this 2017 Subaru Impreza 5-door? As always, carping about power tops the list. A total of 152 of the finest Pleiades horsepower is a good start but a bump to an even 200 would do wonders for this machine. I recognize the technological limitations of offering EyeSight with a manual transmission, of course, but that doesn’t stop this author from wishing it were possible to spec an Impreza in that manner.

Adding USB ports to the rear seat area should also be a priority for the Exploding Galaxy as a cheap way to keep devices charged and quell incessant ‘are we there yet?’ queries.”

What are the chances of this new Impreza grabbing a share of the compact car market? Pretty good, methinks. The 2017 model lays down an opening bid of $19,995 plus freight for its Convenience trim, coming standard with all-wheel drive and air conditioning. From there, it is a $1900 walk to the Touring trim, primarily adding alloy rims and heated front seats (plus a heating grid for the front wipers).

SiriusXM radio and a jumbo infotainment screen don’t appear until the $24,395 Sport model, while the Sport-tech trim adds snazzy 18-inch rims on a sportier suspension and leather seats for the princely sum of $28,595. All trims are available as either a four-door sedan or the five-door hatchback bodystyle seen here, with the extra cargo space commanding a $900 premium. It’s worth the cash. The Technology Package is a $2800 option on Sport models and a $1500 option on Sport-tech models.

Until the gods of technology smile down upon us and see fit to bestow EyeSight with the ability to comprehend a stickshift, our choice is the 5-door Sport trim with a manual transmission. Stickered at $25,295, it contains all the features of our test car save for EyeSight and a proximity key with push button start. This newest Impreza, with its mainstream styling and comfortable interior resting on new global architecture, thankfully retains some of that quirky goodness for which Subaru earned its name.

Appealing to the masses while still preserving some of its trademark quirk? Pinch me! 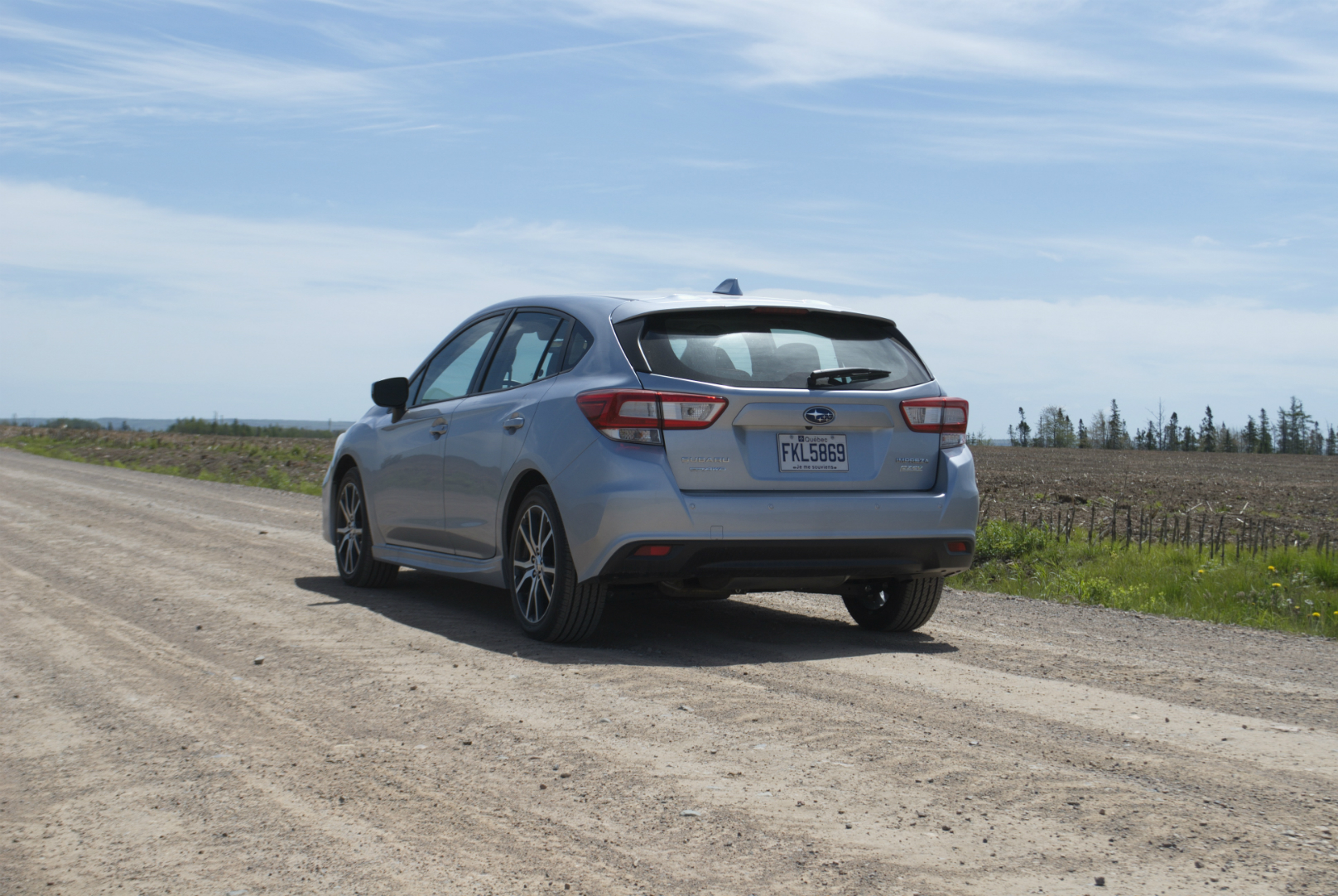